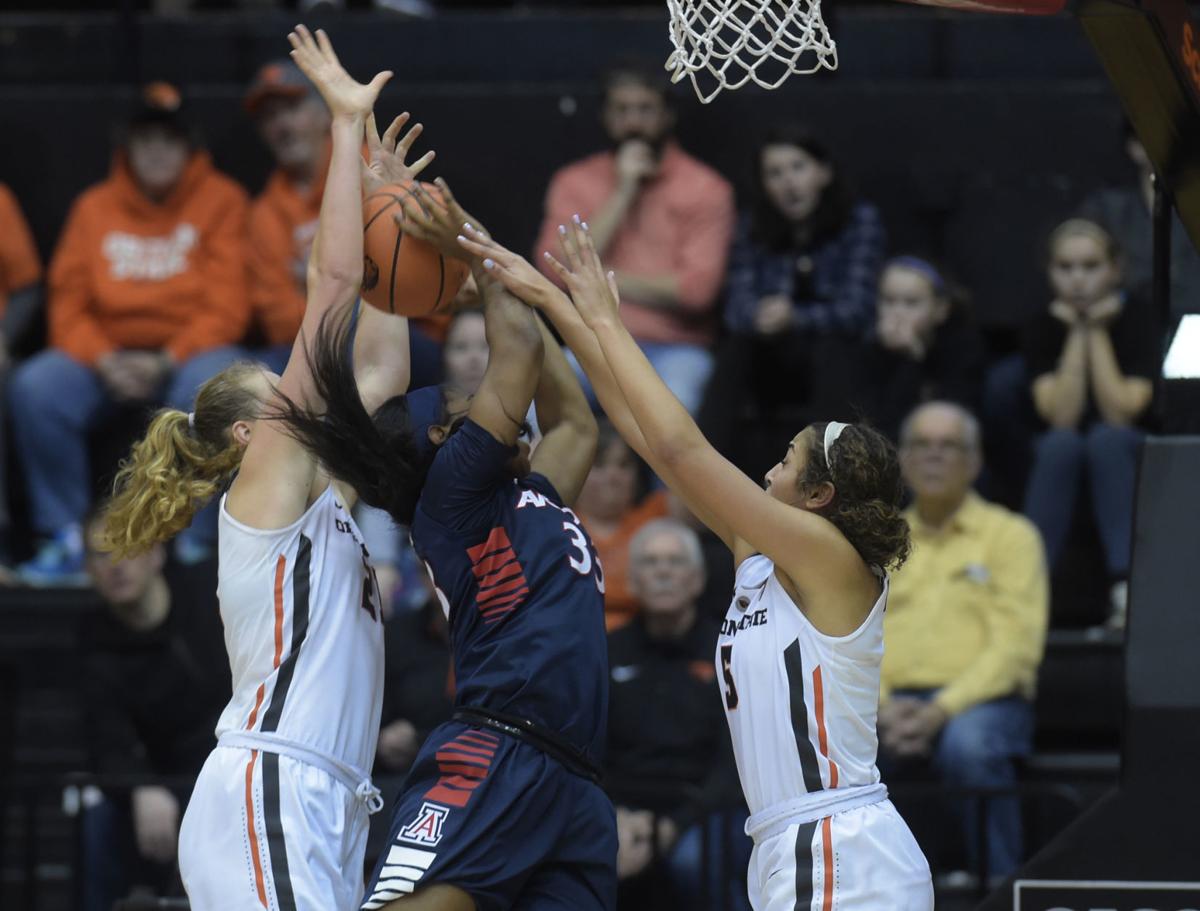 Oregon State's Marie Gulich, left, and Taya Corosdale, right, defend the shot attempt by Arizona's Kiana Barkhoff on Sunday. The Beavers forced the Wildcats into a 16-for-58 shooting performance in an 88-48 win. 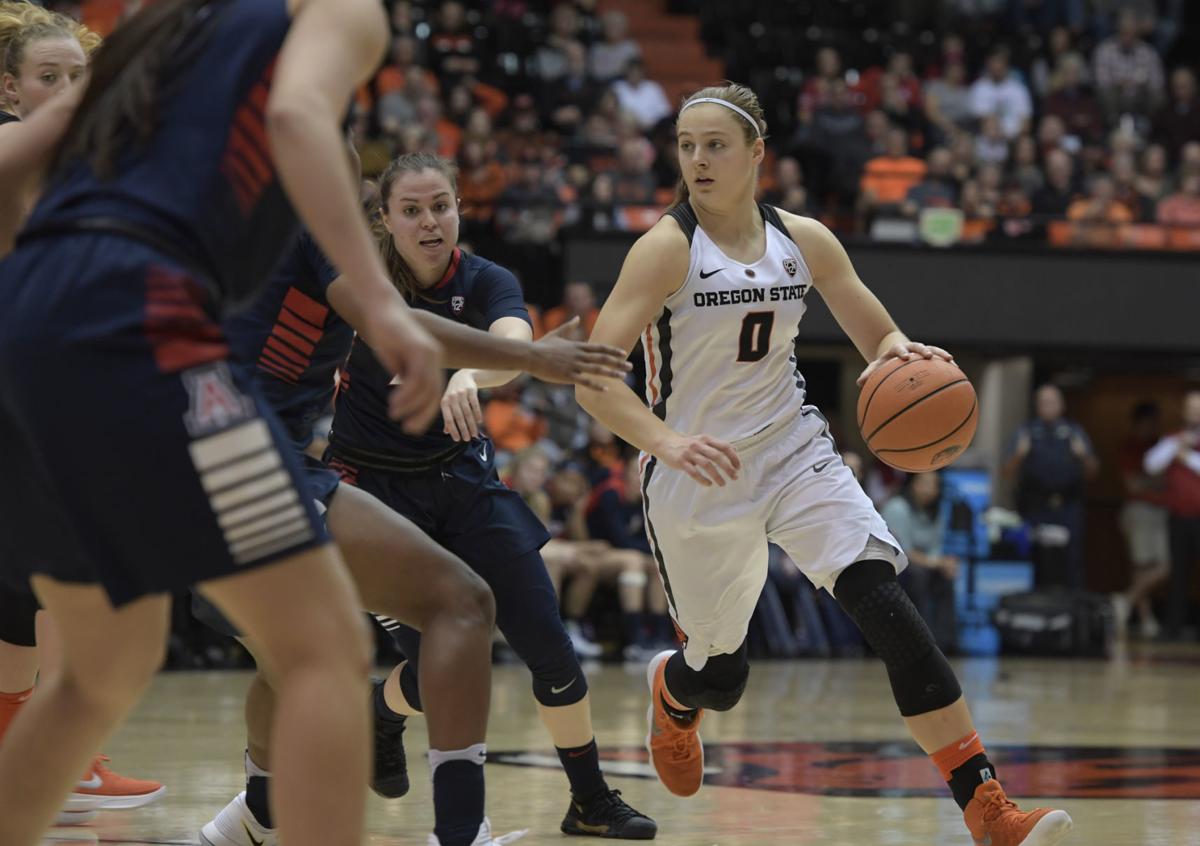 What a difference a week makes.

This past Sunday, they felt the exact opposite after a 40-point win over Arizona capped a 2-0 home weekend.

That included a thrilling 57-54 come-from-behind upset win of then-No. 18 Arizona State on Friday.

It was as if order had been restored.

“Winning against ASU was just really big for the team and just knowing that we have to stick together more and be more of a team, a better team every day,” said senior Marie Gulich, who said the tough weekend turned out to be something the Beavers needed to deal with to move forward.

The Beavers grinded out the win over Arizona State then took apart an Arizona team that was down just one at the half at Oregon two days earlier before being blown out.

“Our offense is just moving very well now and we’re passing on time and everything is kind of clicking right now,” said sophomore guard Kat Tudor. “… It’s always very comforting coming back to Gill and Beaver Nation so that helped a lot for confidence and everything.”

Added Gulich: “It was just good to play, get a rhythm and like see the floor again and getting the rhythm going. I’m just very excited for the next games.”

Next up is the first of two Civil War games. The Beavers host the Ducks at 8 p.m. Friday, then play at Oregon at 5 p.m. Sunday.

Heading into Sunday’s game with Arizona, Tudor had struggled to find her shot, any shot really, the three previous games.

Tudor missed her only attempt against UCLA and finished with two points from the free-throw line.

Against USC, Tudor was 1 for 3 for three points.

Then last Friday, Tudor did not even attempt a shot and was scoreless for the first time this season.

That came after a 27-point and seven 3-point game against Washington State on Jan. 31.

But against the Wildcats, Tudor was 6 for 8 from 3 to lead the Beavers with 18 points.

“It was a lot of fun to just hit shots again because this past week has been kind of brutal for me just mentally,” Tudor admitted. “It was just good to do it.”

One third of the way through the Pac-12 season and Oregon is the sole undefeated team in conference play.

The Ducks are 6-0 and have wins over ranked teams UCLA and Arizona State.

Stanford is 5-1 with a road loss to Arizona State while Oregon State, California, UCLA and Arizona State are all 4-2 and tied for third.

USC has won three straight and is tied with Utah for seventh. Colorado (2-4) is ninth, Washington State (1-5) 10th and Arizona and Washington are still winless in Pac-12 play at 0-6.

The Ducks moved up one spot to No. 7 in the Associated Press poll while UCLA moved up a spot to 13th. Oregon State jumped four spots to No. 18 while California is No. 21 and Arizona State No. 22. Stanford again received votes.

Cal’s Kristine Anigwe was named the conference’s player of the week after averaging 28 points and 13.5 rebounds a game in a sweep of the Washington schools.

UCLA’s Michaela Onyenwere was named the freshman of the week. She had 15.5 points and 10 rebounds per game to help the Bruins sweep Colorado and Utah.

The Arizona schools host Colorado and Utah and UCLA and USC host the Bay Area schools.

Oregon State men’s basketball is anything but a veteran squad in terms of time spent in the program.

OSU basketball: Coaches looking forward to a return to competition

Safety for all will be the top priority, and Scott Rueck and Wayne Tinkle are excited their teams have received the go-ahead to return to the …

OSU women's basketball: No. 4 post verbally commits to the Beavers

Recruiting has been going well for the Oregon State women’s basketball program.

OSU women's basketball: Pivec a finalist for NCAA Woman of the Year

Former Oregon State women's basketball player Mikayla Pivec has been named one of nine finalists for the NCAA Woman of the Year Award.

Oregon State's Marie Gulich, left, and Taya Corosdale, right, defend the shot attempt by Arizona's Kiana Barkhoff on Sunday. The Beavers forced the Wildcats into a 16-for-58 shooting performance in an 88-48 win.