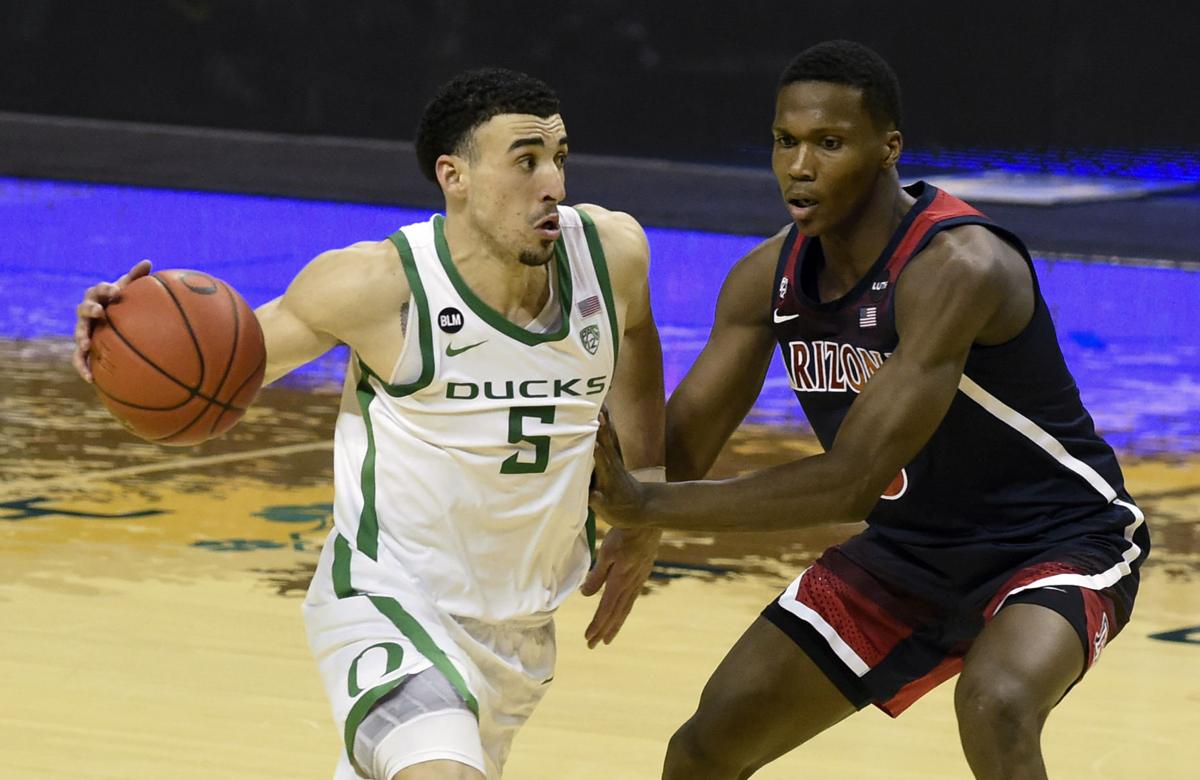 Oregon guard Chris Duarte (5) and the Ducks have won three straight and eight of their last nine heading into Wednesday's home game against UCLA that will help decide the Pac-12 regular-season title. 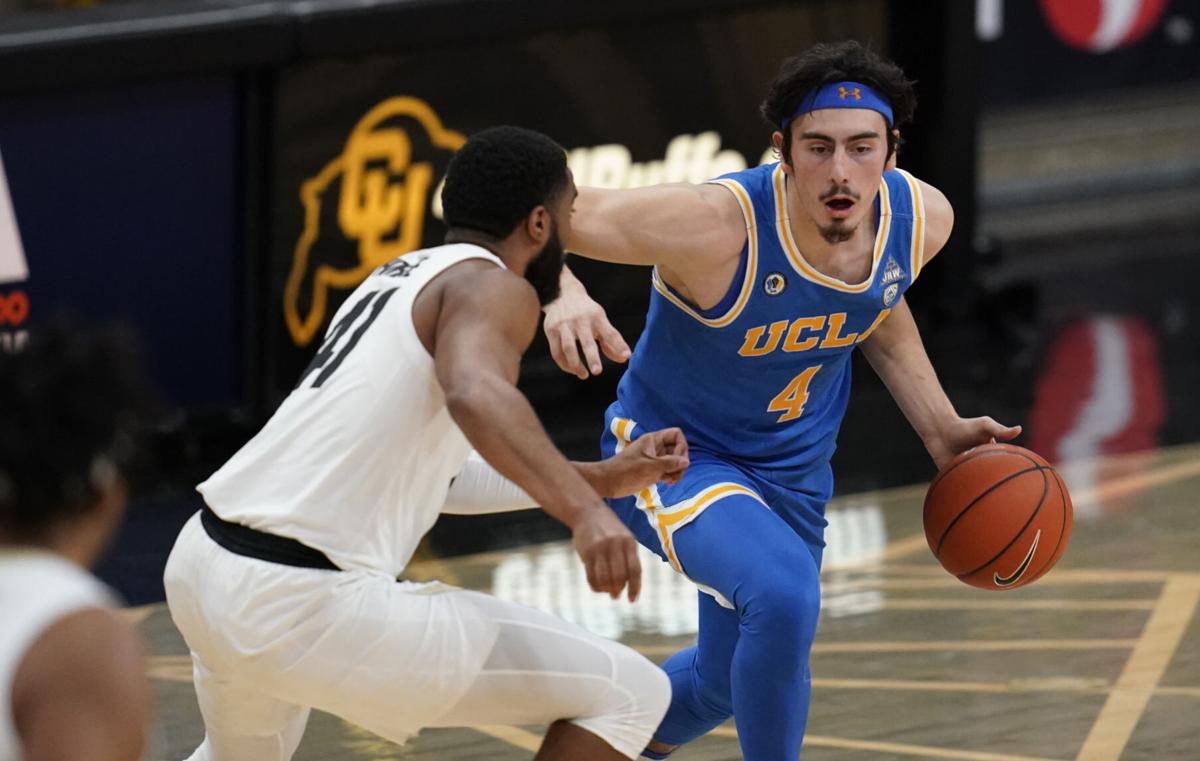 UCLA guard Jaime Jaquez Jr. (4) and the Bruins were tripped up last Saturday in a 70-61 loss at Colorado, ending a four-game winning streak.

There’s still a lot to be decided in the final five days of the Pac-12 men’s basketball regular season.

At the top of the standings, UCLA plays both Oregon and USC this week. The Ducks go to Corvallis after hosting the Bruins, and the Trojans are at home against Stanford before going to UCLA.

With the cancellation of Monday’s Washington State at Arizona State game, the Cougars will finish as the ninth seed (10th place).

Washington is locked into the 10th seed (11th place) and California the 11th seed (12th place). Both have completed their regular seasons, along with WSU and Arizona.

Every other seed, one through nine, is still up for grabs.

If Oregon State wins one of its two remaining games, Stanford loses to USC and Arizona State goes no better than 1-1 this week, the Beavers can claim the fifth seed and a first-round bye in next week’s Pac-12 tournament in Las Vegas … depending on who wins the regular-season title.

Here are my final weekly power rankings of the season.

This week: Home vs. UCLA, Wednesday; at Oregon State, Sunday

Not a surprise, but Dana Altman’s team is playing its best heading toward the end of the season. The Ducks can claim a second straight regular-season title by winning the next two.

This week: At Oregon, Wednesday; home vs. USC, Saturday

Every time the Bruins start rolling, someone jumps up and bites them. They’re undefeated at home and 5-4 away from Pauley in conference games. To say UCLA’s schedule is back-loaded is an understatement.

Coming off its best weekend of the season, Colorado is ramping up for a strong finish. The Buffaloes have had just one bad performance (losing at Cal) since falling at Washington on Jan. 20 in a poor shooting effort.

This week: Home vs. Stanford, Wednesday; at UCLA, Saturday

The Trojans controlled their own destiny in the conference race before losing three of the last four. The Pac-12 regular-season title is still within reach if they can find some traction and Oregon slips.

Arizona’s season ends with the players being punished despite having nothing to do with what put the program in its current situation. If a majority of the best players return, this will be one of the top Pac-12 teams next season.

This week: At Utah, Wednesday; home vs. Oregon, Sunday

What a difference two weeks make, as the Beavers won three of four and are threatening to steal that first-round bye from Stanford. OSU was picked by the media that covers the conference to finish last in the standings. Wayne Tinkle before the season: “I promise you, we won’t finish 12th.”

This week: at USC, Wednesday

Needing wins to keep chasing an NCAA berth, the Cardinal had bad luck last week in losing their top player (Oscar da Silva) to a foot injury the day before opening a two-game home set. Still, Stanford has the firepower (with da Silva) to shake up the Pac-12 bracket.

This week: At Colorado, Thursday; at Utah, Saturday

Because the Pac-12 tournament seeds will be decided by conference win percentage, the Sun Devils actually have a chance to grab the fifth seed. That would be an incredible accomplishment for a team that struggled to get in games in December and January.

This team has shown it can hang with the top squads in the conference but also produce droughts that lead to lopsided defeats. Winning four games in four days next week to keep the Utes’ season alive is probably too much to ask.

The Cougars could have moved up a spot or two had they defeated the Sun Devils once. But WSU lost the first one in overtime then had the second one canceled due to a COVID-19 problem in its program.

The Huskies can only wonder how much better their record could have been had they won more games decided by single digits. They lost six such contests in Pac-12 play and seven overall.

The Golden Bears head to Vegas with one win since Jan. 16. But there’s no guarantee they will roll over for Oregon State, Stanford or Arizona State.

The hope and desire to get the ball to its post players down low and get production continues for the Oregon State men’s basketball team.

OSU men's basketball: Beavers get defensive in final minutes to close out a win

The offense went dry down the stretch Thursday night, but Oregon State saw its defense save the day.

Legend Lamer found value in taking a redshirt during his first season with Cal Poly.

OSU men's basketball: A look at the opponent — Utah

Oregon State and Utah meet for the second time this season on Thursday in Salt Lake City. Here’s a look at the Utes.

Oregon State has played the last two weeks like it was a veteran squad near the top of the Pac-12 men’s basketball standings, making clutch pl…

Oregon State hosts Oregon on Sunday in the most-contested rivalry in college basketball when the programs meet for the 356th time. Here’s a lo…

Oregon played with the urgency of a team needing a win to claim a conference title and backed it up with lights-out shooting from deep.

Oregon guard Chris Duarte (5) and the Ducks have won three straight and eight of their last nine heading into Wednesday's home game against UCLA that will help decide the Pac-12 regular-season title.

UCLA guard Jaime Jaquez Jr. (4) and the Bruins were tripped up last Saturday in a 70-61 loss at Colorado, ending a four-game winning streak.