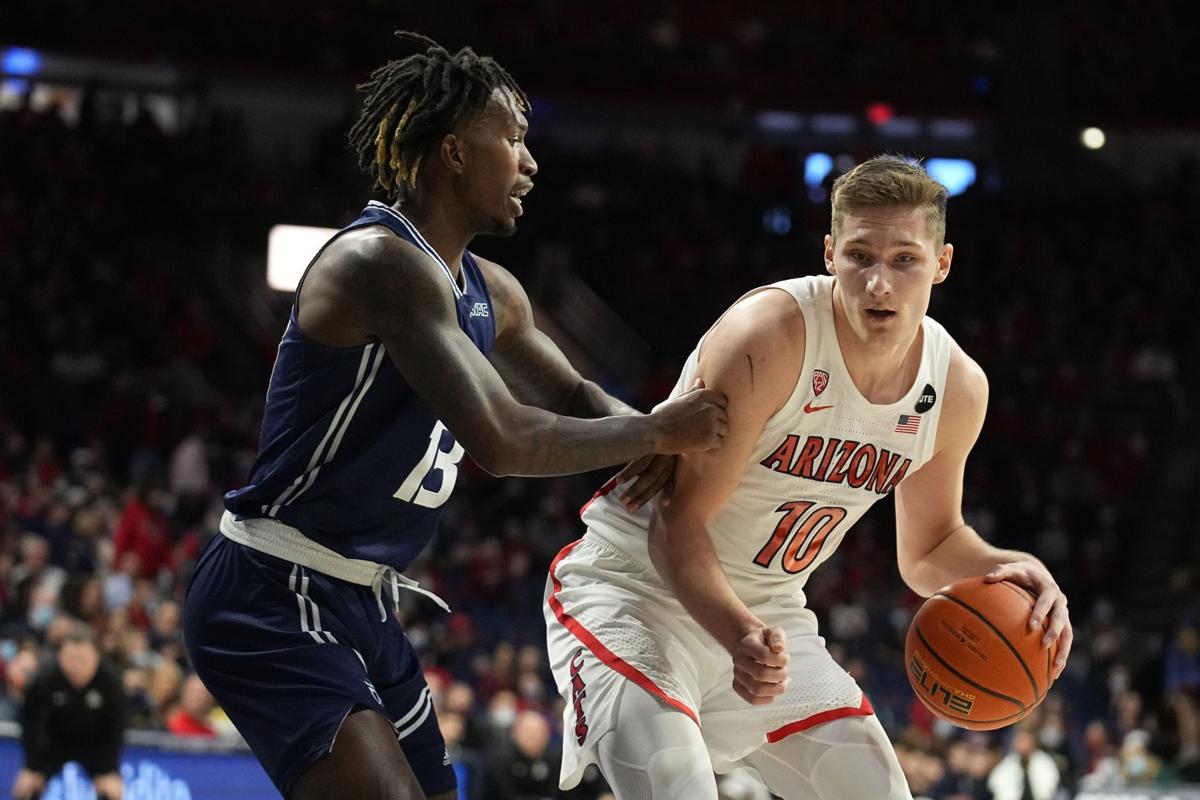 Arizona forward Azuolas Tubelis (10) is averaging 14.8 points and 6.1 rebounds for the sixth-ranked Wildcats. 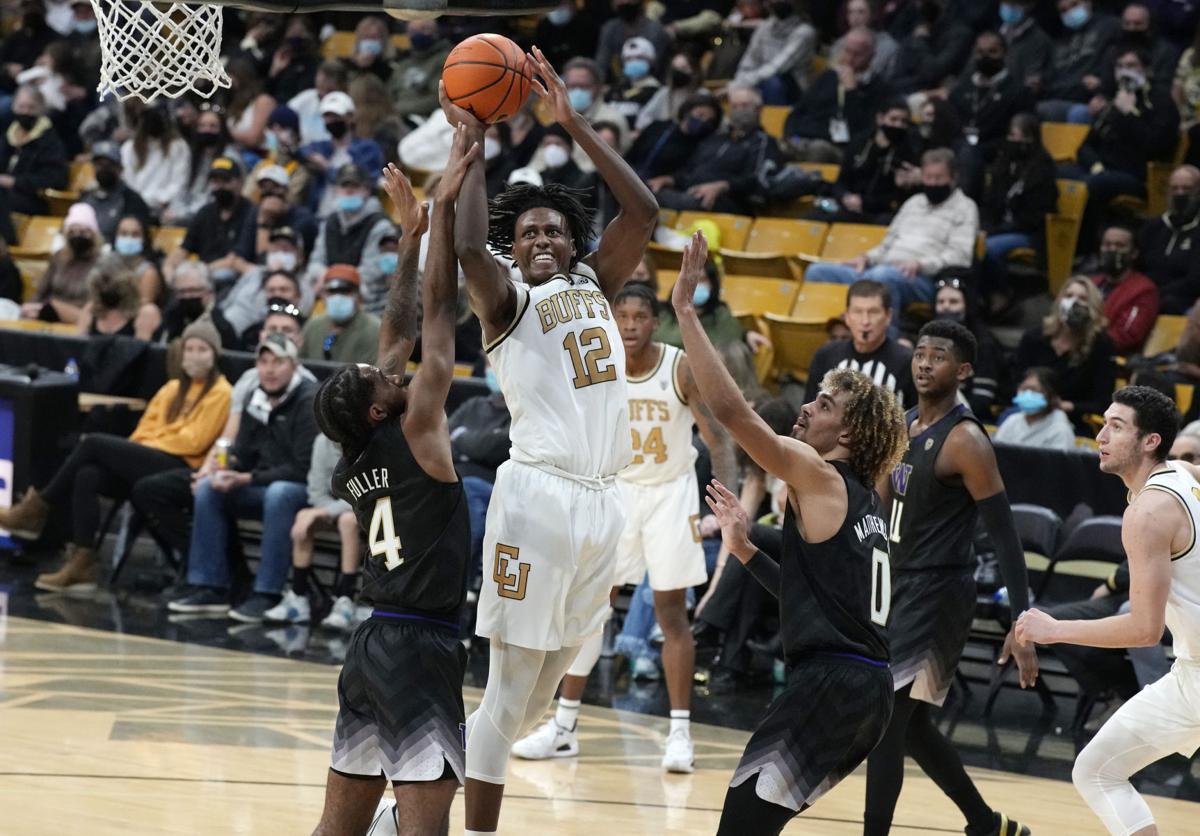 Colorado forward Jabari Walker (12) and the Buffaloes go to Arizona on Thursday looking for their first signature win of the season.

Finally, a matchup between two of the top teams in the conference.

With Arizona’s trip to the L.A. schools two weeks ago postponed due to COVID issues, the first scheduled games between squads expected to battle for king of the hill in Pac-12 men’s basketball were put on hold.

On Thursday, fans get the next best thing to date when Arizona hosts Colorado. The Buffaloes were picked to finish sixth in the conference in the preseason media poll, but they look like they might be better than that.

Also Thursday, UCLA hosts Oregon. The Ducks could again be a contender for a conference title, but that hasn’t been proven out yet.

Here are this week’s power rankings.

The third-ranked Bruins, playing their first game in nearly four weeks, shook off some rust against Long Beach State then pulled away in the second half from a much-improved Cal squad. They’ll get tested this week by two solid offensive teams.

This week: Home vs. Colorado, Thursday; home vs. Utah, Saturday

The sixth-ranked Wildcats’ staff has tried tirelessly to reschedule those L.A. road games but to no avail. Thursday’s contest will be a good measuring stick for both teams.

The No. 5 Trojans were one of just two undefeated teams left in the country, leaving only top-ranked and defending NCAA champion Baylor. Then the Bears also lost Tuesday. USC was shooting 60% at the foul line (348th of 350 in the country) heading to Stanford and shot 21 of 32 (65.6).

This week: At Arizona, Thursday; at Arizona State, Saturday

The Buffaloes have quietly put together a solid season. But they lost by double digits to both the ranked teams they’ve faced and certainly have something to prove.

Playing its first game in 19 days and without a home crowd against USC, Stanford showed it will be no pushover. Freshman forward Harrison Ingram (21 points and 10 rebounds versus the Trojans) is a future Pac-12 star, if he sticks around.

This week: At UCLA, Thursday; at USC, Saturday

The Ducks escaped from Gill with a third straight win. A mini gauntlet, with WSU to follow this week’s games, gives Oregon a chance to continue its momentum.

This week: Home vs. Stanford, Thursday; home vs. California, Saturday

Giving up 46 second-half points kept the Cougars from a win in Boulder. But they bounced back to get the split and now come home, where WSU has lost to Eastern Washington and New Mexico State.

The Golden Bears showed they aren’t quite ready to compete with the big boys. But the upcoming road trip could foreshadow what direction their season is heading.

This week: At USC, Thursday; at UCLA, Saturday

The Beavers had the late-game momentum Monday but couldn’t finish it off. There’s no doubt this team is playing much better than it was a month ago.

This week: Home vs. California, Wednesday; home vs. Stanford, Saturday

The Huskies turned a 14-point deficit into a nine-point lead in a little more than 10 minutes in Salt Lake City. Washington can keep its season afloat this week before going to the Beaver State.

If the Sun Devils play Saturday, it will be just their second game since Dec. 19. The only one played in that stretch was a 24-point loss at California.

This week: At Arizona State, Thursday, ppd.; at Arizona, Saturday

The Utes’ season continued a steep fall with the collapse against the Huskies. Now they get the conference’s three ranked teams in succession.

OSU men's basketball: Heartbreaking loss the result of more than a missed layin

Gary Payton II has long been known as a defensive stopper without much offensive game.

UCLA, Arizona and USC have all hit the ground running in the first seven weeks of the Pac-12 men’s basketball schedule.

OSU women's basketball: Beavers will return to action against No. 7 Arizona

Coaches stress the importance of focusing on one game at a time, and right now that is literally the situation for the Oregon State women’s ba…

In a wild, back-and-forth game that wasn’t decided until the final minute, Crescent Valley High had the ball right where it wanted it: in poss…

Gary Traub needed every bit of fuel he could muster Friday night in his heavyweight match at Gill Coliseum.

OSU men's basketball: A look at the opponent — UCLA

Oregon State tries to get a road split Saturday night when it heads to third-ranked UCLA. Here’s a look at the Bruins.

Arizona forward Azuolas Tubelis (10) is averaging 14.8 points and 6.1 rebounds for the sixth-ranked Wildcats.

Colorado forward Jabari Walker (12) and the Buffaloes go to Arizona on Thursday looking for their first signature win of the season.