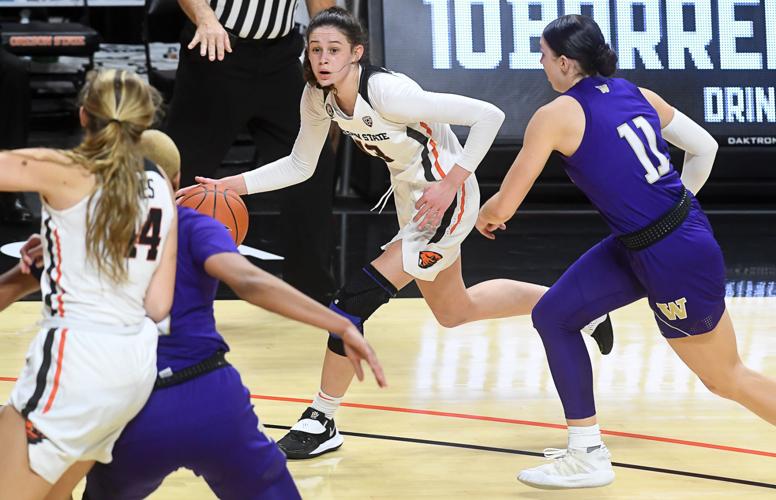 Oregon State's Sasha Goforth had a big week, averaging 15.7 points and 5.7 rebounds in three wins. She was named the Pac-12's freshman of the week on Monday. 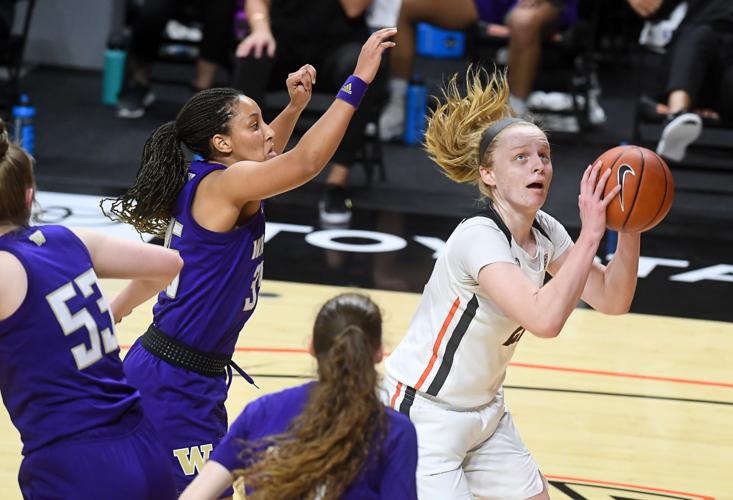 Oregon State's Ellie Mack caught fire this past week and hit 7 of 11 3-pointers while scoring in double figures twice.

There was a bit of a surprise waiting the Oregon State women’s basketball team on Sunday when the players learned that some of their families were on hand to watch them play for the first time this season.

That’s because a handful of fans were allowed to be in attendance when Utah and Oregon State squared off in the Huntsman Center in Salt Lake City.

And while they weren’t sitting behind the benches, but rather in the upper deck of the arena, it was still a strange occurrence at first.

“It was honestly like really weird, like I wasn't used to it anymore which is weird to say that it felt weird,” said Oregon State freshman Sasha Goforth, who celebrated her birthday by scoring 16 points and grabbing 10 rebounds for her first double-double as a Beaver in an 84-74 win.

“But then it made me so happy. I forgot how it felt to like have other people behind you, other than just your team and the bench, which is awesome. But just other people that are excited for you and excited to be there watching you, so it was really great.”

Coach Scott Rueck had an old friend on hand as well. So he could understand how excited those players were who had family at the game. And how excited the parents were to see their daughters play, if just for a game.

“I was just so excited that some of them got to come,” he said. “I mean that has been one of the most unique, difficult things for all of us is not having people that have been with us our whole lives as we've competed — coaches and players.”

The ability for a few people to be in attendance brought up an interesting question: If Utah can make it work, why not other places?

“They're sitting miles from us way up there, all our arenas are big, why can't we let families come,” he said. “I don't understand it, personally, but it seems like there's a way to make it happen if people would let us. So it was really, obviously, exciting to get to see them and have them there. I know it meant a lot to our kids to have their parents come.”

The Sanford Cardinal have not played a game inside Maples Pavilion since the season opener on Nov. 25 against Cal Poly.

Instead, because of directives from the Santa Clara County health department, the Cardinal have been on the road the past two months, playing most of their “home” games in Santa Cruz, California with a couple i Las Vegas.

Those directives have changed and the Cardinal will now return to Maples on Friday against Colorado.

“I think our team is very excited,” Stanford coach Tara VanDerveer said. “Quite honestly, we’re pretty tired; three games in five days and travel. Our team, they’ve been warriors and I’m really proud of them.”

The Cardinal played three games in Washington, facing Washington State twice last Wednesday and Friday to make up a game from earlier this season, then beat Washington on Sunday.

“I’m really just looking forward to getting back into Maples, being able to just go to the gym and get up shots whenever we want,” Hannah Jump said. “We’re all super pumped to be back.”

Only three teams — Stanford, Oregon State and Arizona State — were able to play their allotment of scheduled games this past weekend.

Oregon State and Stanford both played three, with the third being a makeup from a previously postponed game, while Arizona State was swept on the road in Los Angeles.

Washington played twice but had its third against Cal postponed.

Colorado, Utah, UCLA and USC all played once this week as Cal, Oregon and Arizona had both games postponed.

Stanford leads the regular-season conference title race with a 12-2 mark after three wins this past week.

Oregon State’s Goforth was named the Pac-12’s freshman of the week after helping the Beavers to three wins during the week.

The guard averaged 15.7 points and 5.7 rebounds per game and hit 18 of 32 field goal attempts. It’s her second honor.

She joins Current teammate Taylor Jones, Mikayla Pivec, Sydney Wiese and Jamie Weisner as the only Beavers to win the award more than once.

USC’s Endyia Rogers was named the player of the week after scoring 30 points, grabbing six rebounds and dishing out five assists in a win over Arizona State. It’s her first weekly honor.

Oregon State closed out a tough four-game stretch in eight days with a road win at Utah on Sunday as Aleah Goodman had 21 points and Sasha Goforth 16 points and 10 rebounds.

OSU women's basketball: Beavers rounding into form after rough first half of season

Coaches can run whatever drills they want and players can think they know exactly what to do in practice.

Just imagine what Talia von Oelhoffen could be capable of doing once she gets up to full speed with the Oregon State women’s basketball program.

The snow was falling in and around Corvallis Tuesday afternoon, making getting around town miserable for anyone on the roads.

Pac-12 women's basketball notebook: Ducks getting it done on defense

Who has scored the most World Cup goals of all time?

Who has scored the most World Cup goals of all time?

Oregon State's Sasha Goforth had a big week, averaging 15.7 points and 5.7 rebounds in three wins. She was named the Pac-12's freshman of the week on Monday.

Oregon State's Ellie Mack caught fire this past week and hit 7 of 11 3-pointers while scoring in double figures twice.