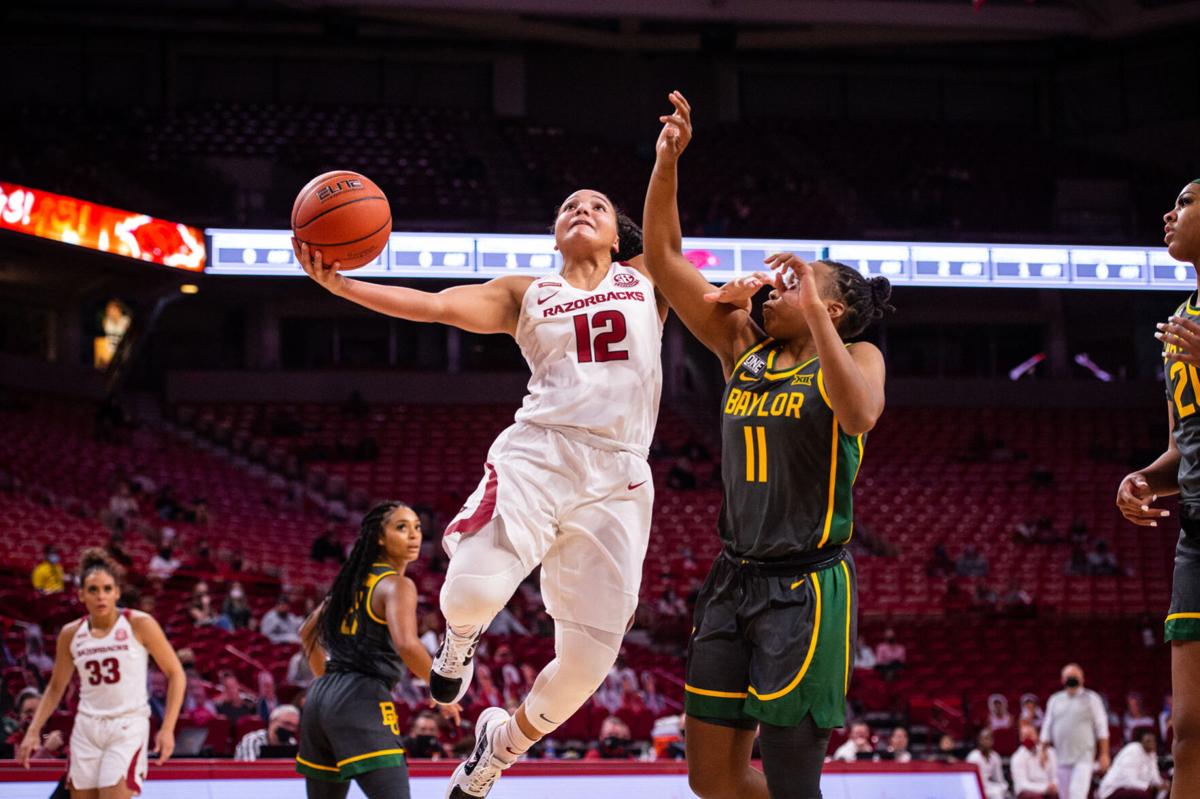 Former Oregon State point guard Destiny Slocum has found a new home at Arkansas, where she is averaging 16.3 points per game in her first 10 games. 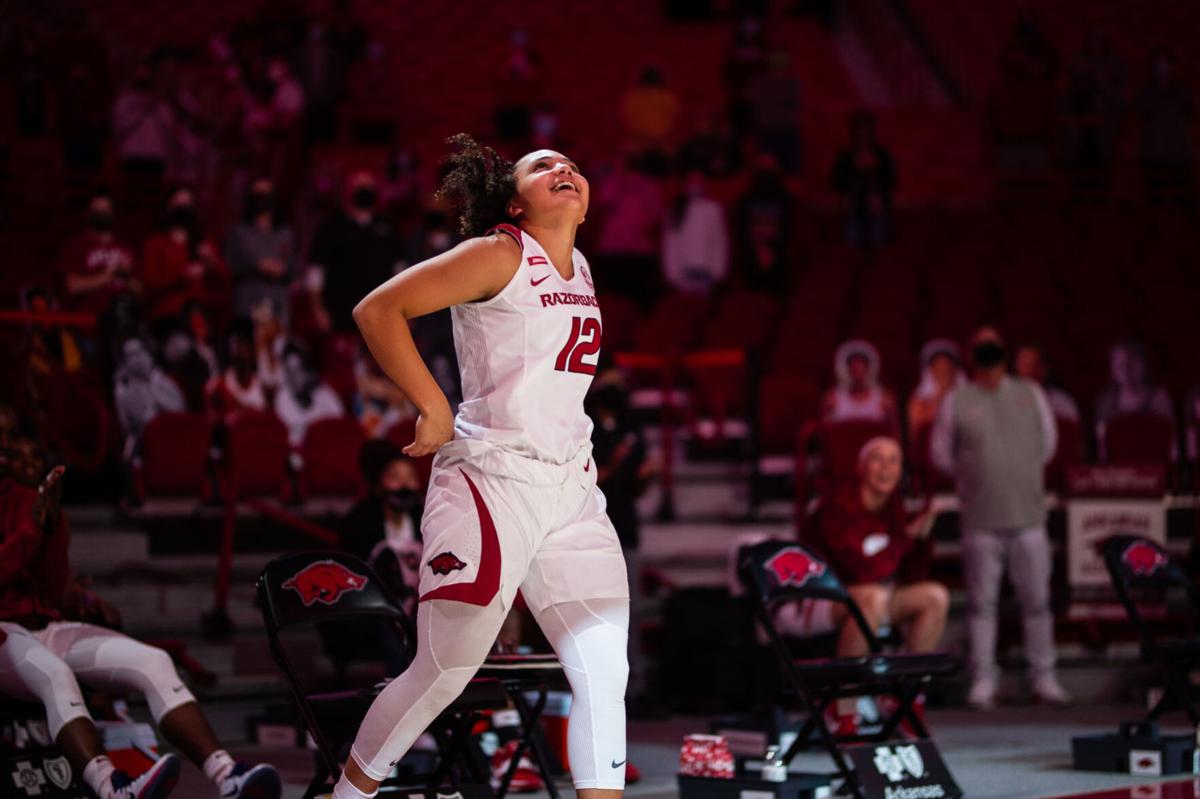 Destiny Slocum is finally getting to play for coach Mike Neighbors, who she committed to play for out of high school when he was the coach at Washington. 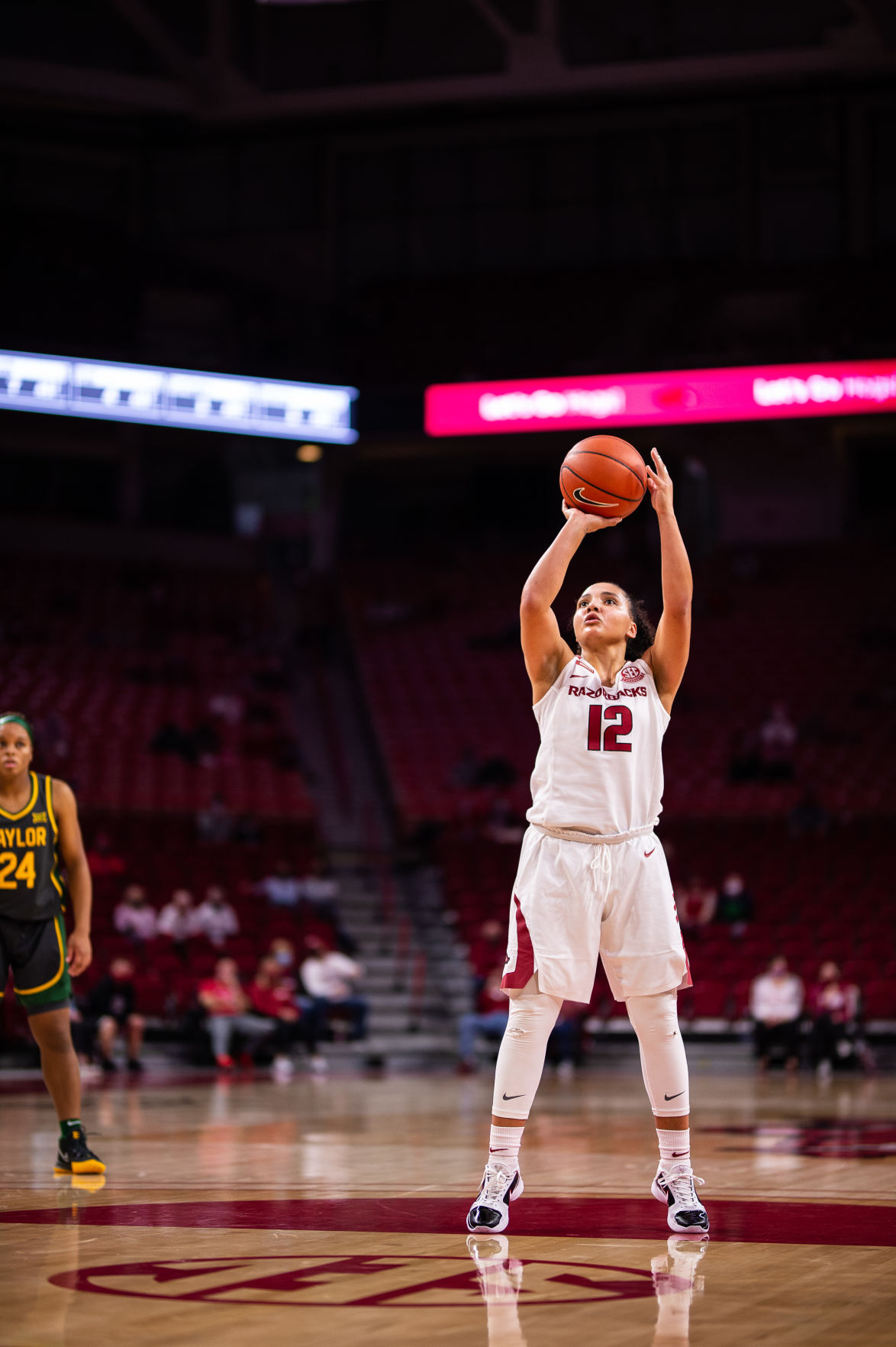 Destiny Slocum has helped Arkansas to a 9-1 start, including a win over then-No. 4 Baylor.

When Mike Neighbors was the women's basketball coach at University of Washington, he went all in on one recruit.

That meant being in contact with that recruit just about every single day for the better part of two seasons. He watched her play every game one summer, even one in Russia.

And while Slocum originally intended to play for Neighbors and a Huskies program that was in the 2016 Final Four, she changed her mind and instead went to Maryland.

“That was tough. I couldn't even call him because I knew if I heard his voice that I would change my decision in a heartbeat,” Slocum said recently on a video posted on the Arkansas women’s basketball Twitter account.

It was the beginning of a long journey that eventually came full circle.

After one season, Slocum transferred to Oregon State. After sitting out a season due to transfer rules, Slocum led the Beavers in scoring each of the past two seasons, helping them to a Sweet 16 in 2018-19.

While Slocum could have returned to Corvallis for her final season of eligibility and no doubt would have made a major impact on the court for the Beavers, she decided to enter the transfer portal as a grad transfer.

That’s where the story comes full circle. The chance to play for Neighbors, now at Arkansas, was back on the table. And she couldn’t pass it up.

“I've always been really thankful for coach Neighbors,” she said in the video. “I told him that when I called him. I told him, I said, ‘you're the one coach in the entire nation that I feel like has never changed their personality or the way they feel about me as a person and as a player throughout my entire journey.’”

Neighbors was more than happy to rekindle the relationship and welcome Slocum to Arkansas for her final season. Slocum said she couldn’t be in a better position on and off the court, especially during the pandemic that made any move this past summer more difficult.

“And so I think that's what I needed, I needed a coach that I didn't have to build a relationship with because I'm a senior, it's my last year,” she said. “There wasn't much time for that, you couldn't do that, especially with COVID it was tough. He already knew me as a person, he already knew me as a player.

"That was a big thing for me with Arkansas was I didn't want to have to start from ground zero. And he said that on the phone is, you're a senior and the day you walk in here I'm treating you as a senior. And that was what I wanted. That's what I wanted for my last year.”

So far it’s been a good fit for Slocum, who has started all 10 games and is averaging 16.3 points per game and leads the No. 11 Razorbacks with 35 assists. Arkansas is off to a 9-1 start that includes an upset of then-No. 4 Baylor.

The numbers aren't as important as the team success.

“I'm going to do what I need to do,” Slocum said. “My goal is to win every night and I said that to someone one day I was like, I can have zero points and zero everything but as long as we win then my job is accomplished, my job is done. Because that's what I want to bring and that's what I bring to the program is let's win. And let's do it in great fashion. And so yeah I think my game fits well here.”

She has also fit in well with her new teammates.

“To bring that type of energy on to the floor is really fun for us and we like to play up and down, really fast paced, and she brings that at the two and the one spot,” senior Jailyn Mason said. “And you can never doubt experience. She's has experience in several different conferences now so it's really exciting to see what she brings us. But she's also willing to learn from us at every single point. … She works every day to be better and it's something that we all do and we just love having her with us.”

Making the NCAA tournament has always been a forgone conclusion for Slocum at Maryland and Oregon State, but that’s not the case yet for Arkansas, which was on the cusp last season until the tournament was canceled.

Neighbors said there are times when he and Slocum look at each other and think about what might have been if they had teamed up from the start.

“And you know a lot of people would say that that stinks,” Neighbors said in the video. “But I think it just makes the time together that we have more special. That we can we kind of have that connection because of the way it's all gone down and I don't regret the way it happened.

“I would have obviously loved to coach the kid every single day that she was a collegiate athlete but it's not how you start, it's how you finish. We've heard that all since we were a young age and this is one case where that saying comes true.”

OSU women's basketball: Beavers have areas to improve when they return to court

While the Oregon State women's basketball team paused most team activities on Dec. 20 due to COVID-19 testing and contact tracing protocols an…

Leading up to Thursday's WNBA draft, Aleah Goodman admitted she had no idea what to expect.

Former Oregon State point guard Destiny Slocum has found a new home at Arkansas, where she is averaging 16.3 points per game in her first 10 games.

Destiny Slocum is finally getting to play for coach Mike Neighbors, who she committed to play for out of high school when he was the coach at Washington.

Destiny Slocum has helped Arkansas to a 9-1 start, including a win over then-No. 4 Baylor.