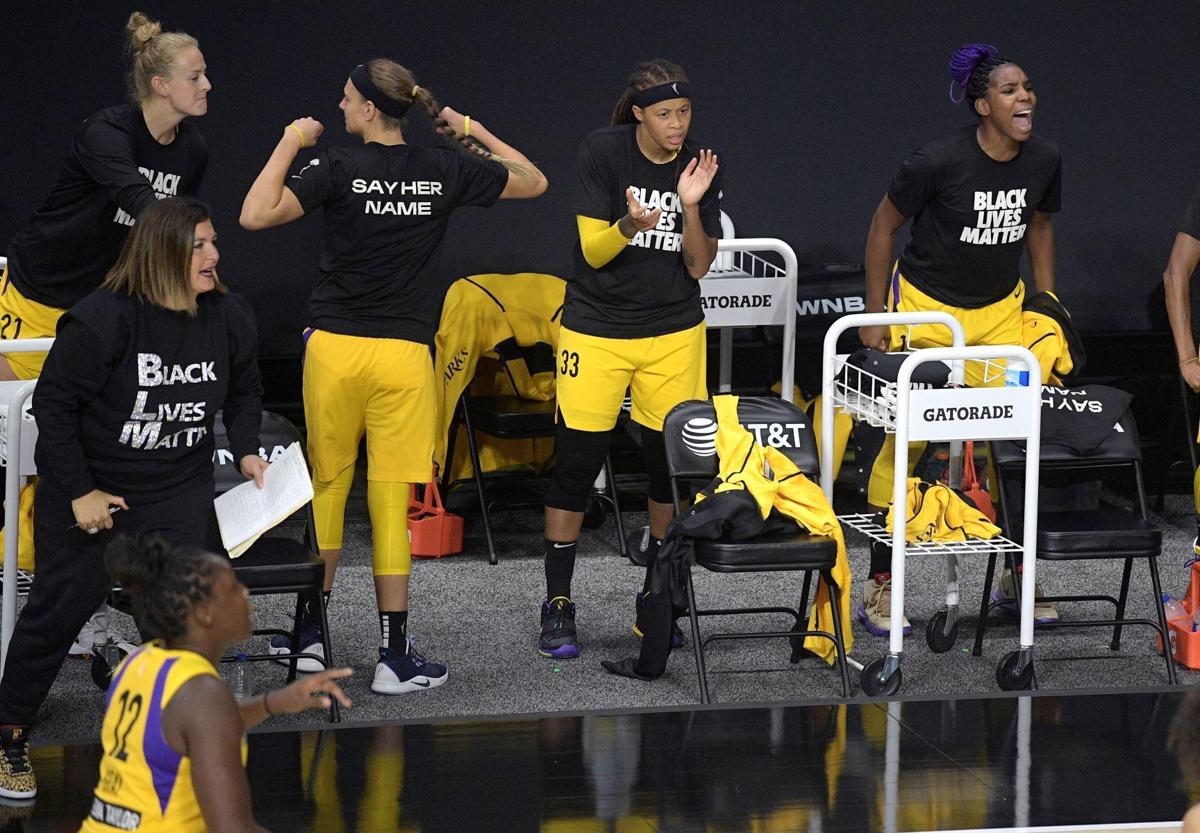 Former Oregon State stars Marie Gulich (back left) and Sydney Wiese (second from left in back), now with the Los Angeles Sparks, have spoken against racism and social injustices. 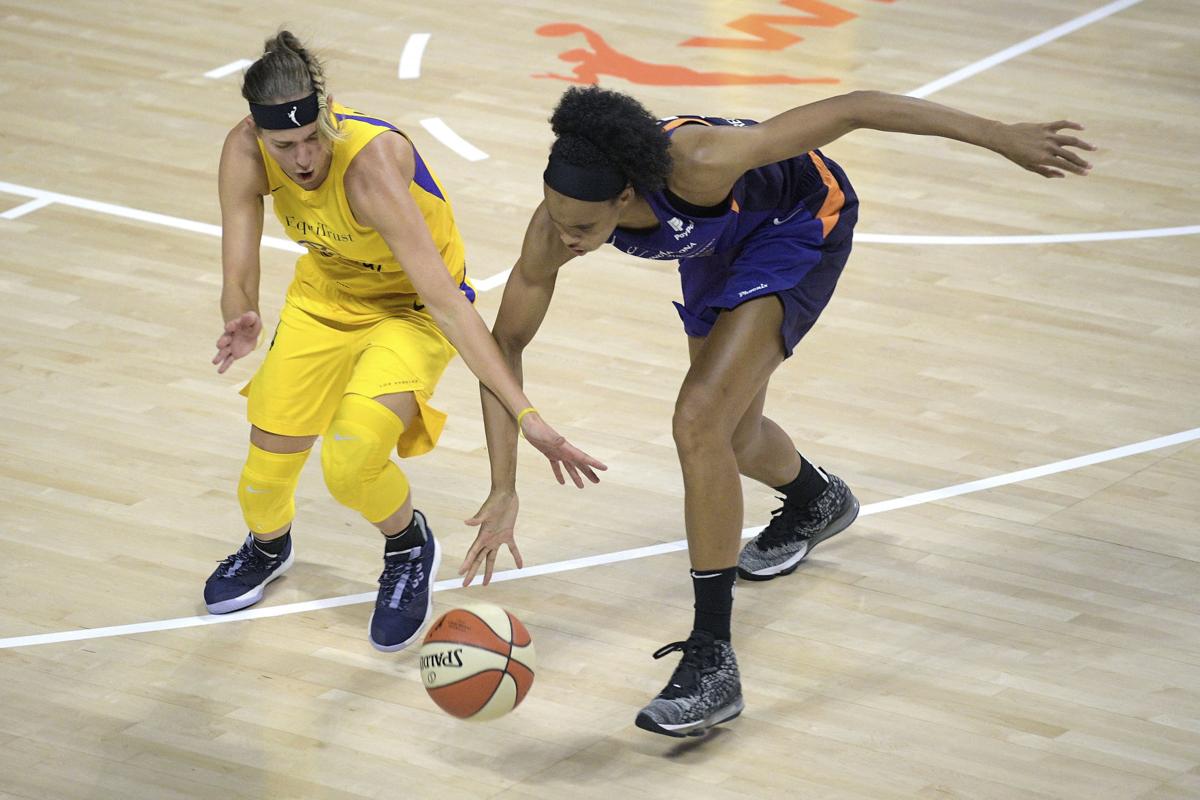 Los Angeles guard Sydney Wiese, left, battles Phoenix forward Brianna Turner for a loose ball in their season opener. Wiese has embraced using her platform to speak out on many topics.

Sydney Wiese found out she tested positive for COVID-19 just before she was supposed to take over the Los Angeles Sparks’ Instagram feed for a short while.

She shared that revelation with teammate Marie Gulich and fulfilled her obligation with the Sparks before announcing the news to the masses on her own social media platforms later that day.

The fourth-year pro and former Oregon State standout guard continued to be up front and open about her illness — which fortunately was mild — and become a quasi-spokesperson on dealing with the coronavirus.

She made sure to hydrate and take care of her body while avoiding people during her quarantine — she was most fearful of passing it along to her parents, who she was staying with at the time in their home in Phoenix — and has since healed.

She was also among the first groups of people to donate their plasma.

“I wanted to be able to give any way that I could because of my experience so others can learn from it,” Wiese said from Florida a couple weeks ago. “If people had questions on tips on how to recover, what to do or how to get a test, I wanted to be a resource for that. And then at the end of the day, being able to donate plasma was super cool for me just knowing that it could be a firsthand gift, in a way, because it wasn't necessarily common yet for COVID survivors to be donating plasma. It was important to give as much as I could.”

While being that vulnerable came relatively easy for Wiese, it took some nudging from another former Oregon State teammate to begin to speak out on another social issue — racial injustice.

At the beginning of June, Gabby Hanson, who was in the same class as Wiese at OSU, challenged Wiese — “in a healthy and loving way,” she said — to use her platform once again.

“I was ashamed it took me so long to speak up on it,” Wiese admitted. “And I didn't really want to allow this reality in, because once you let it in it's so heavy and it becomes super real.

From that moment Wiese had a desire to listen, learn and find ways to seek out as much information and knowledge on systemic racism and the social injustices that many people of color face today, and have in the past.

“It’s very overwhelming but I know for me with basketball as a vehicle, this is our form of expression,” Wiese said. “We have an amazing opportunity to not just put on T-shirts, but to really amplify our voices, make sure that people who don't have this platform are heard.

“And, for me, I know I want to listen. I want to make sure I hear and support and seek out ways I can be actively anti-racist and ways that I can be better. And so it's a learning process that's going to continue to be a learning process. I think it goes beyond hashtags, T-shirts, and what we’re trying to do as a league is real change and using our voices for real movement.”

Gulich, who spent three seasons at Oregon State playing alongside Wiese, was in her home country of Germany when George Floyd’s death in late May started this movement in earnest.

At first, despite following numerous WNBA players on social media and seeing what they were posting, Gulich felt like she was a long way away from the issue. But she started to have conversations with some of her Black friends back home and soon realized this wasn’t an issue exclusive to America.

“They were like we're experiencing the same thing in Germany,” Gulich recalled. “I was like, this is not some American issue, this is a world issue.

“The entire world, we need to learn, and we need to educate ourselves and we need to be anti-racist. Coming here and being a part of this and learning and educating myself and having conversations with my family and friends really helped me to grow.”

As to be expected, Gulich admitted to being uncomfortable at first and would fall back to avoiding conversations and conflict.

“People would say something racist but I felt uncomfortable speaking out about it,” she said. “Maybe not uncomfortable, but not knowing what to say or how to say it. I was embarrassed by it.”

She said she had to look inside herself and take the next step.

“I need to be more upfront about it when I feel like something isn't right,” Gulich said. “And that's why I’m really proud to be a part of this.”

The WNBA has embraced the Black Lives Matter cause and players are wearing T-shirts with names of those who have lost their lives at the hands of law enforcement.

While many in the league have been socially active for some time, Gulich said having all the players and teams in the same location has helped unify the cause league-wide.

“It’s a great opportunity for all of us, not just for us as the Sparks’ organization but the entire WNBA and all the teams,” she said. “It's so rare that we’re all at the same place, and to have that opportunity to maybe work on something together in a more intimate (setting). And you can have more conversations and you can collaborate in different ways, which would be more difficult if this were a normal situation.

“… I think with our season starting, the NBA season starting up, everything we can do to spread awareness and keep this movement going, I think that’s a good opportunity for all of us.”

OSU women's basketball: A look at the all-decade team

What a decade it has been for the Oregon State women’s basketball program under coach Scott Rueck.

Marie Gulich was nervous, and honestly had no idea where she would go in Thursday night’s WNBA draft.

Former Oregon State stars Marie Gulich (back left) and Sydney Wiese (second from left in back), now with the Los Angeles Sparks, have spoken against racism and social injustices.

Los Angeles guard Sydney Wiese, left, battles Phoenix forward Brianna Turner for a loose ball in their season opener. Wiese has embraced using her platform to speak out on many topics.