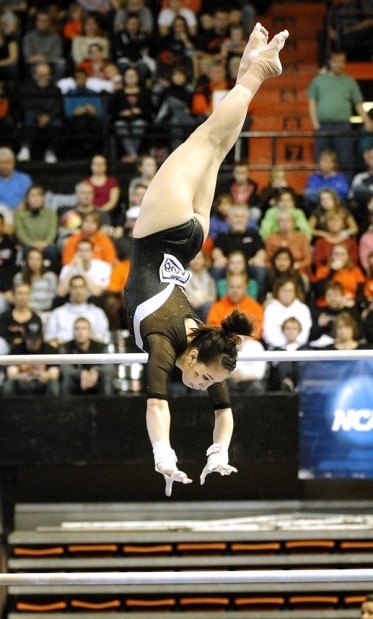 Oregon State’s Leslie Mak scored a 9.900 on the bars Saturday afternoon. Mak won the bars, beam and the all-around as the Beavers cruised to the Corvallis Regional title in Gill Coliseum. ANDY CRIPE | CORVALLIS GAZETTE-TIMES 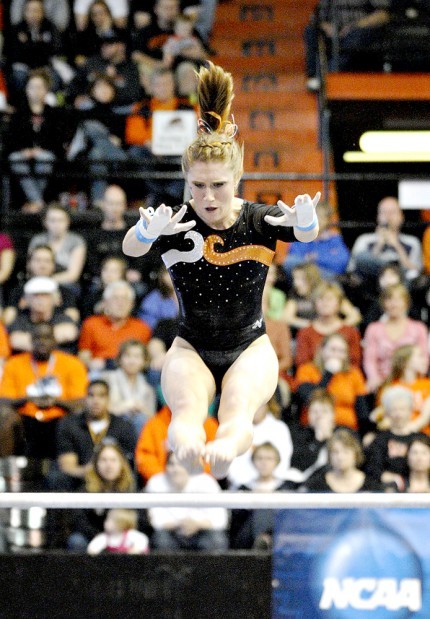 Oregon State’s Olivia Vivian tied for second with a 9.875 on the bars on Saturday afternoon. (ANDY CRIPE | CORVALLIS GAZETTE-TIMES) 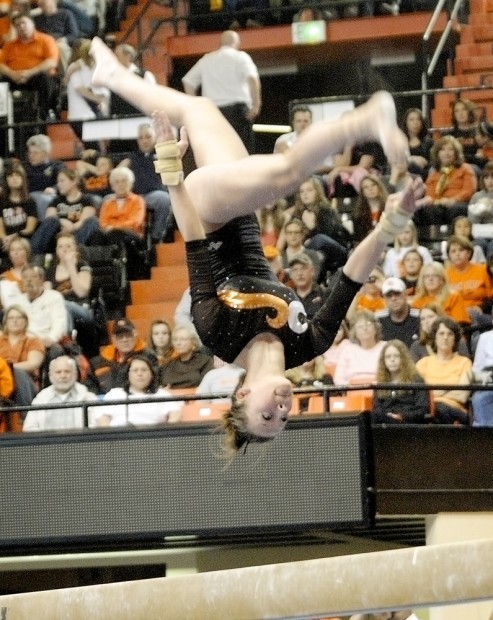 CORVALLIS - The NCAA Corvallis Regional was a formality.

The third-ranked Oregon State gymnastics team put together another complete meet Saturday night and won the six-team event before a crowd of 5,033 in Gill Coliseum.

OSU didn't count a fall and scored a 197.025 for its second-best score of the season. It was also the third time this season the Beavers surpassed the challenging 197.000 barrier.

No. 10 Nebraska scored a 196.550, but didn't put much pressure on OSU. The Cornhuskers and Beavers advance to the NCAA Championships on April 15-17 in Cleveland.

"I'm elated," OSU coach Tanya Chaplin said. "Regionals are always nerve-wracking no matter what seed you are. So now we are looking forward to getting ready and excited to travel to Cleveland."

The Beavers qualified for their sixth straight nationals meet, 26th overall. It was the 10th regional victory for the program, the first since 2008.

"We never let our guard down no matter what," OSU junior Olivia Vivian said. "In competitions like this anything can happen. It was important to stay focused and do what we do in practice."

The Beavers followed the season script as junior Leslie Mak, the Pacific-10 Conference Gymnast of the Year, continued her stellar season.

"It has been an amazing year," Mak said. "I've learned so much and grown so much. It has been a thrill, and I'm so happy with how this season has been so far."

"It's overwhelming, but exciting," Ranzy said of her early career success. "It's a learning process and you look forward to it every time you step on the floor."

The Beavers scored well in each event and were the only team to not have their event numbers dip below 49.000.

"Floor was a really great event to start on," Mak said. "We are really alive and we work with the crowd. Then we worked off that and we had some amazing scores."

The vault team followed with a 49.125. While that didn't reach the team average, the Beavers were the only ones to reach the 49.000 level after two rotations.

The uneven bars, the team's top event, scored a 49.225. It was off the average, but good enough to extend the lead.

OSU's only issue was Jen Kesler's fall. She wanted to stop her handstand on the top bar, but lost her balance.

The balance beam group scored a 49.350, which topped the 49.115 season average, thanks to five strong routines

Stambaugh wobbled and then fell. Olivia Vivian and Mak followed with high scores to seal the victory.

"This is a team sport," Chaplin said. "The other five scores were awesome and we didn't have to count a fall (on bars and beam). We have been thrown a lot of different challenges and this group doesn't give up."

Kelsi Blalock started the beam with a 9.875, and that was important. Normal starter Melanie Jones was out with an ankle injury and also missed the floor lineup.

"We have a lot of depth," Vivian said. "If someone is injured like Melanie was, we have two or three read to step up."

Nebraska able to finish second to OSU at gymnastics regional

Oregon State’s Leslie Mak scored a 9.900 on the bars Saturday afternoon. Mak won the bars, beam and the all-around as the Beavers cruised to the Corvallis Regional title in Gill Coliseum. ANDY CRIPE | CORVALLIS GAZETTE-TIMES

Oregon State’s Olivia Vivian tied for second with a 9.875 on the bars on Saturday afternoon. (ANDY CRIPE | CORVALLIS GAZETTE-TIMES)

Oregon State’s Kelsi Blalock tied for second on beam with a 9.875. (ANDY CRIPE | CORVALLIS GAZETTE-TIMES)
© Copyright 2021 Gazette-Times, 1835 NW Circle Blvd Corvallis, OR | Terms of Use | Privacy Policy
Powered by BLOX Content Management System from TownNews.com.
You don't have any notifications.