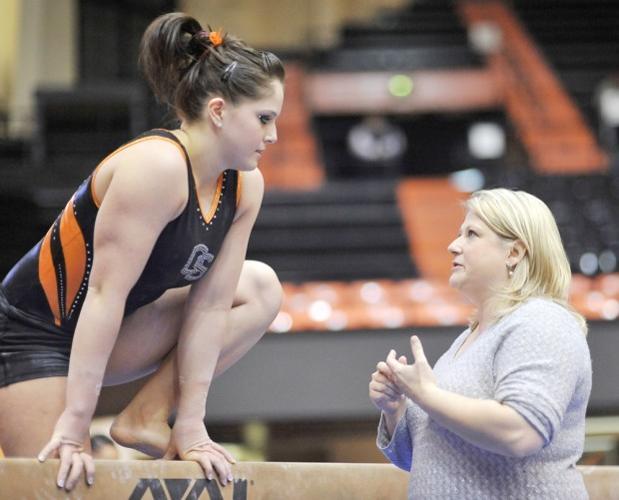 Tanya Chaplin, right, has carried on Oregon's State's strong gymnastics tradition and has the Beavers seeded No. 4 in this year’s NCAA Championships, which begin today. (Scobel Wiggins | Gazette-Times) 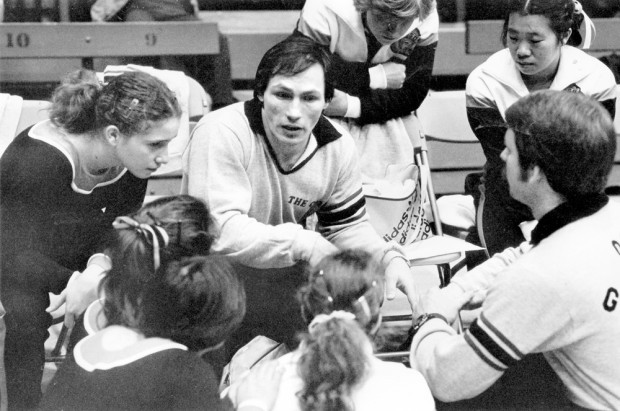 Ron Ludwig coached the Beavers for 10 years, leading them to a fourth-place finish at the 1982 NCAA Championships. (Oregon State University) 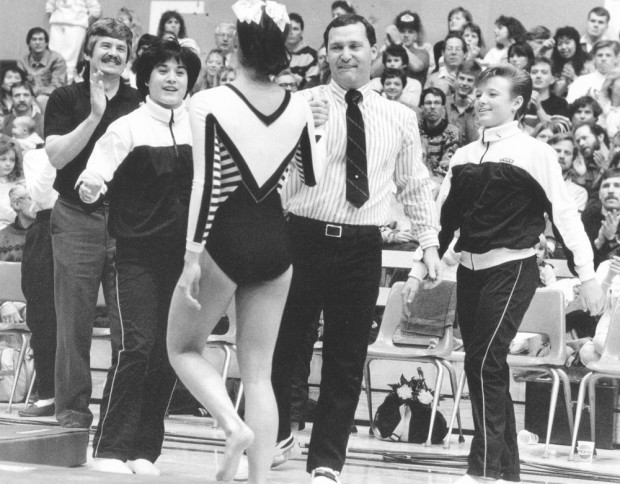 Jim Turpin coached the Beavers 12 seasons. He had a 36-4 record in 1991 and the Beavers placed fourth at the NCAA Championships.
CliffKirkpatrick

It's an annual occurrence at this time of year.

The Oregon State gymnastics team heads into the NCAA Championships with dreams of advancing past the first day into the Super Six championship round.

Reaching that level hasn't happened since 1996, but the Beavers have been contenders nearly every year.

The fourth-seeded Beavers are one of 12 teams looking for a national title this weekend in Cleveland.

If they finish in the top three of today's six-team evening session, they will attain their elusive goal and compete for a national title on Saturday.

The Beavers are consistently a top-10 team. They score big for high rankings, draw large crowds, beat some of the biggest programs in the country and are respected enough to host regional and national championship events.

So what's the secret to their success, where other OSU teams fail? The gymnastics team is the most consistent program on campus.

"It has been a process," coach Tanya Chaplin said. "Each team built off each other. Not only does the coaching staff look at what to improve every year, each team has done that with the athletes. It has been a work in progress. Every misstep we've had we try to grow from it."

Gymnastics started at OSU in 1966 with Sylvia Moore the first coach. She went on to be an administrator who pushed for the sport.

Moore helped develop athletes under the Association for Intercollegiate Athletics for Women banner, then handed the program over to Ron Ludwig in 1976. He produced a .718 winning percentage and four of the seven individual national champions in program history.

"It just took off," Moore said. "And then we did well with Ron and we began to travel more. It kept going."

Gymnastics was taken more seriously when Title IX legislation passed in 1975, which stated women and men must have equal opportunities.

The program moved out of the women's building and was allowed to compete in Gill Coliseum in 1980. By 1982, the Beavers joined the NCAA.

There have been 24 national championship appearances, four Pac-10 titles, nine regional titles and 36 All-Americans, 16 conference champions and 11 gymnasts who scored a perfect 10.

Money was diverted to gymnastics and women's basketball. Then Jim Turpin was hired to coach the program in 1986.

With a vast budget and a history of success, the program blossomed with four top-six finishes in the nation under his watch.

"We had more money than everyone else, and that helped," Turpin said. "After running a club (as a business) I couldn't spend all the money I had to work with. Everything was there. It was a matter of getting the right kids."

Recruiting the elite gymnasts - Olympians or national team members - has always been difficult. Turpin and Chaplin saw that and went after a level beneath them to fit the team's needs.

Even then it was difficult on the West Coast going up against UCLA and Stanford due to their warm-weather locations and academic reputations.

"What I always sold was Corvallis," Turpin said. "In this small community you are more of a big fish in a small pond. The kids get noticed a lot, and that gives them self-confidence. It's a sport, but it is entertainment. Gymnasts want to perform in front of big crowds."

Turpin also went after strong students. The Beavers combined winning two academic national titles in 1991 and 1992 with top-six finishes at the national meet those years.

"You have a group like that and the university feels good about showcasing as student-athletes," Turpin said. "We had (the) academics (department) on our side."

Success in the arena and classroom led to the Gladys Valley Gymnastics Center, a top-notch facility where the gymnasts could train in 1992.

The Beavers had been working out of a small room in Langton Hall. Turpin spoke at a community event and mentioned one of the gymnasts was hurt from running into a wall.

An OSU administrator heard that and pushed for the workout facility. Recruiting improved because gymnasts had a quality place to train.

"We are blessed to have the facility we have," Chaplin said. "We are looking at it and how we can make it better and stay up with everyone else. It will make a difference because they don't know if they can reach their goals with what we have. We don't have the training tools of other schools."

The training center was built out of the old Mitchell Playhouse from a $700,000 grant by the Wayne and Gladys Valley Foundation.

Gymnasts have a training facility, cardio workout area, locker room and medical treatment station. Coaches have an office there with a video technical analysis system.

Success wasn't the only reason the Beavers drew fans. Turpin started his own grassroots marketing campaign.

He spoke to community groups, brought in many volunteers for meets and socialized with fans before and after events.

"I marketed a lot," Turpin said. "That's part of what you have to do to build a program. It means more to you has a head coach than anybody. You not only have to recruit, but spread the word."

Turpin still attends the meets as a fan, and estimates that 80 percent of the people in attendance are from the Corvallis area. He still meets people for the first time who tell him they became a fan when he coached.

OSU averaged more than 4,000 fans a meet the last three seasons. More than 8,000 attended the 1990 NCAA Championships in Gill Coliseum.

Chaplin took over in 1996 and has led the team into the postseason every season, including nine national championship meets.

The Beavers now recruit some of the best athletes in the country. In football terms, they are loaded with four- and five-star athletes.

Five-star athletes in gymnastics are those who have received elite international training such as Olivia Vivian and Leslie Mak. They competed at the Olympic or international level.

Four-star athletes are standouts at the Junior Olympics level such as Makayla Stambaugh, Kelsi Blalock and Jen Kesler.

The elite gymnasts have been difficult to lure to OSU but a breakthrough has been made internationally. Recent graduate Laura-Ann Chong was the first from Canada; now there are two on the roster and two from Australia with others looking into the Beavers.

OSU's recruiting reach taps into clubs on the other side of the country. Freshmen Brittany Harris is from Oklahoma and Britney Ranzy comes from Virginia.

Chaplin receives letters from many top gymnasts around the country wanting to learn more about the Beavers.

"We are getting very talented athletes," Chaplin said. "In recruiting we look for passion. They love to compete and that makes a difference. We want someone with talent and who wants to be at Oregon State. They need to be excited. That grows in success."

Programs strive for what the gymnastics team possess. There's coaching experience, a big name to help recruiting, top-notch facilities, a passionate fan base and history of excellence.

Success has become a cycle.

U.S. swimmer rescued by coach after fainting at world championships

Tanya Chaplin, right, has carried on Oregon's State's strong gymnastics tradition and has the Beavers seeded No. 4 in this year’s NCAA Championships, which begin today. (Scobel Wiggins | Gazette-Times)

Ron Ludwig coached the Beavers for 10 years, leading them to a fourth-place finish at the 1982 NCAA Championships. (Oregon State University)

Jim Turpin coached the Beavers 12 seasons. He had a 36-4 record in 1991 and the Beavers placed fourth at the NCAA Championships.
© Copyright 2022 Gazette-Times, 1835 NW Circle Blvd Corvallis, OR 97330 | Terms of Use | Privacy Policy | Do Not Sell My Info | Cookie Preferences
Powered by BLOX Content Management System from TownNews.com.
You don't have any notifications.