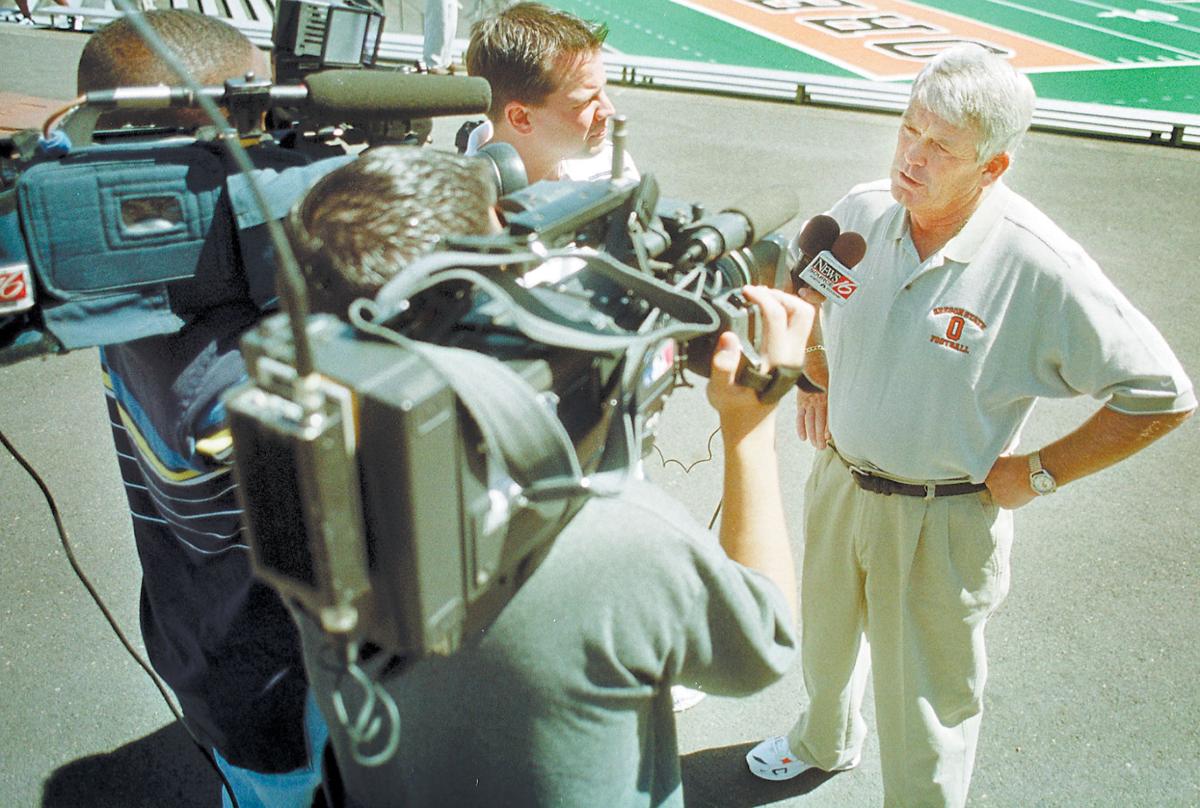 Oregon State head coach Dennis Erickson answers questions from television reporters at Reser Stadium back in 2000. Erickson was in his second season with the Beavers during that campaign and they were coming off the first winning season in 28 years. 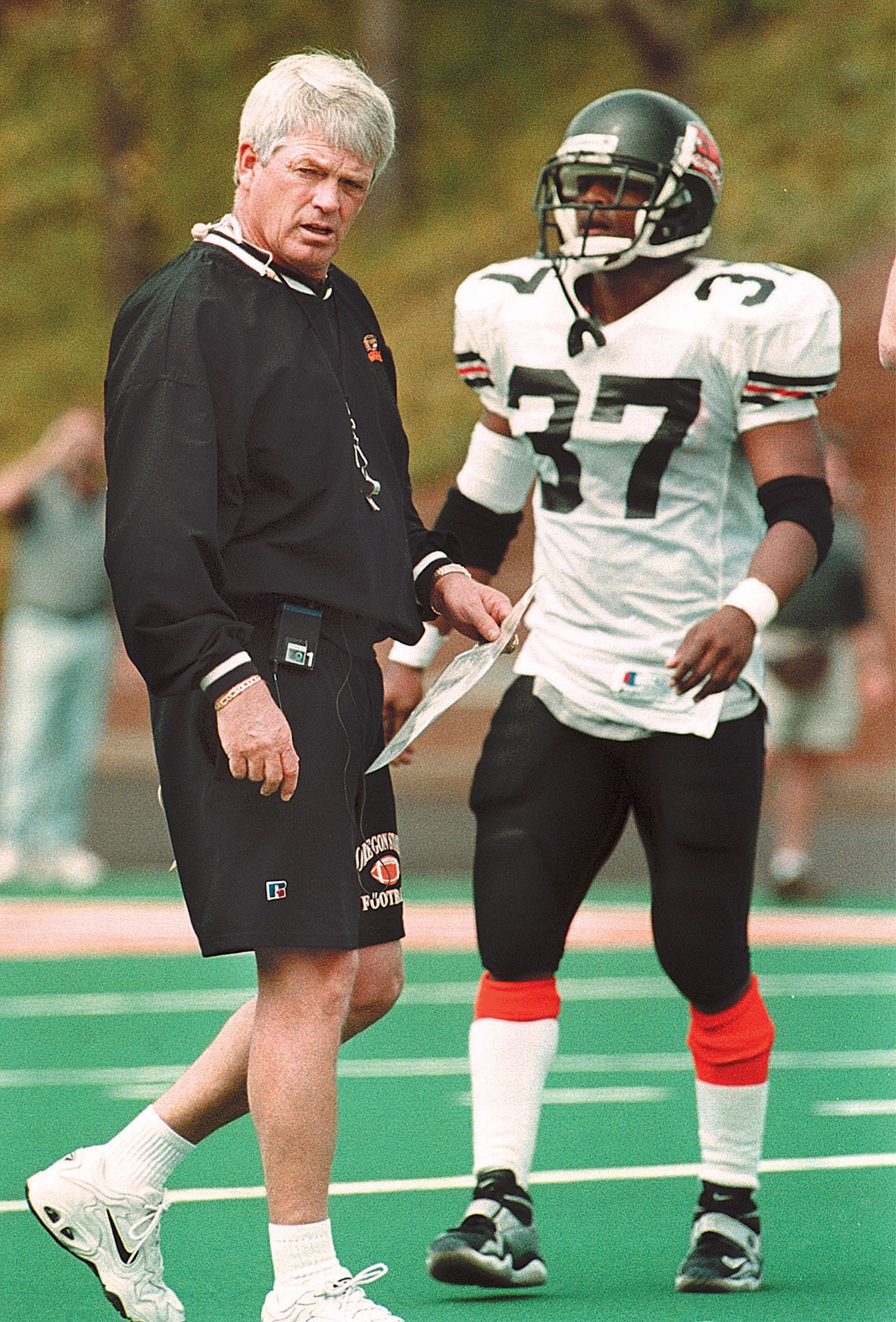 Dennis Erickson led the Beavers to a bowl game in his first season as head coach in 1999.

It's encore time for Dennis Erickson.

The 53-year-old Oregon State football coach begins year No. 2 in Corvallis and year No. 31 overall with a veteran team, a new contract, and higher expectations from boosters still buzzing from the Beavers' first winning fall (7-5) since 1970 and a Christmas trip to the O'ahu Bowl in Honolulu.

• He was the first coach in school history to lead OSU to a bowl in his first season.

• He was a semifinalist for national Coach of the Year honors.

• He was rewarded with a five-year contract that made him the highest-paid coach in OSU history.

It was a spectacular return to college football for a man who had been unceremoniously dismissed the previous year by the NFL's Seattle Seahawks. He termed the season one of the best he's ever had in a decorated coaching career that began in 1969.

But even at the highest moment he remained a grounded, candid realist, ever true to his Scandinavian roots. One successful year won't alter what he's learned through experience: Everybody loves a winner, but losing coaches are yesterday's news.

"One year doesn't make a program," he warned, almost as if to caution the bandwagon jumpers who joined the party last fall during OSU's march to its first postseason action since the 1965 Rose Bowl.

"We don't want to be a fly-by-night outfit; we've got to develop some consistency. Obviously people are going to be looking for that from this program, and nobody will take us lightly this year. Once you get to a point where you've won — whatever goal you have — once you reach it, it's probably harder to stay there than get there.

"It's going to be harder for us. We might have a better team and not win as many games."

Last year's 7-5 mark may have ended the embarrassing losing streak, but it only whetted the players' appetites for more success. They're still stinging from a 25-14 loss at Oregon in the regular-season finale, and from an unexpected 23-17 setback to host Hawaii in the O'ahu Bowl.

It was the first non-conference loss Simonton had experienced after nine consecutive victories during his redshirt, freshman and sophomore seasons.

"To do it on national TV in a bowl game, that bothered me," he said. "It's just going to make me hungrier. It was great to be in Hawaii. But it's going to make me mad if we even come anywhere near Hawaii this year."

In fact, the Beavers have concluded every post-practice team huddle with a unison chant of "Rose Bowl."

"There's a different tone. When you haven't done it for 30-odd years, there's still that doubt in the back of your mind. Now we've done it, we've gained some respect and we want to improve on that," junior quarterback Jonathan Smith said.

"There's still that high level of excitement. We realize we can do it, so any sense of doubt is gone. We went to Hawaii, which was a great time, it just didn't turn out great at the end."

The Beavers haven't been idle since losing to Hawaii.

• Nineteen of the 21 players they signed in February are in fall camp.

• Construction on a new indoor practice facility is scheduled to start next month.

"There's no question, as far as our boosters, fans, and coaches in the state, that winning has been an extremely positive thing," Erickson said. "The impact last season had — financially, enrollment-wise, all those things — has been tremendous.

The pieces are in place for another solid season. OSU has six home games; it returns 17 players (eight offense, eight defense) who started at least three games, and both kickers.

Simonton may be the offense's heart and soul, but Smith is the cornerstone. Lappano figures he'll be twice as good as he was in 1999 because Smith now knows Erickson's system inside-out.

"We found a couple flaws in his drop that we worked on and got straightened out. We're moving the pocket for him, which we didn't do much last year," Lappano said.

"Last year he had his own set of problems, understanding the system, winning a job. I don't think he was real comfortable demanding a lot from the other players because he had to take care of his own job. Now he's going to be the leader on offense."

"That's the strength of our team, no doubt," Erickson said.

There are areas of concern.

• Playmaking wide receivers Roddy Tompkins and Imani Percoats graduated after combining for 79 receptions for 1,396 yards and 13 touchdowns. Senior starter Robert Prescott (49-614) and T.J. Houshmandzadeh (24-378) and backup Shawn Kintner (11-135) are back but all were inconsistent in 1999. Also, Prescott is suspended until Sept. 30 for an off-campus assault.

• Sophomore placekicker Ryan Cesca started strong (6 for 8) but was 1 for 7 in the final four games, with two blocks.

"We lose the inside of our defense; we've got to have some guys step up there," Erickson said, referring to sophomore Eric Manning, redshirt freshman Dwan Edwards and senior Ryan Atkinson.

"The offensive line has a pretty good nucleus; they just have to work together. Fessler punted extremely well. Cesca will get better and better every year. We knew we were going to go through (the 1999 inconsistency) because he was a freshman."

At 5-foot-10 and 198 pounds, one-time walk-on Smith isn't a prototype Pac-10 quarterback. But he's a productive one; his 3,053 yards led the Pac-10 in 1999, when he had seven interceptions in 425 attempts. He's also 8-7 lifetime as a starter and the Beavers have averaged 30 points in games he's either started or played the majority of the minutes.

"We want to throw the ball more efficiently," Smith said. "And we have to be better in the red zone; we have to score touchdowns. We got in there so often, and came away with three points or a missed field goal. When you put the ball in the end zone, that's seven points and momentum."

Saturday's opener against Division I-AA Eastern Washington can be used toward bowl eligibility under an NCAA provision that lets I-A teams count one win over a I-AA opponent every four years to attain the winning season necessary for postseason play.

The other non-league games, against Mountain West Conference teams New Mexico and San Diego State, will be testers. The Beavers then open Pac-10 play against long-time tormenters USC and Washington, defending champion Stanford and should-be-better UCLA.

"The key to our start is winning our non-conference games," Erickson said. "That's what it's all about, then you have a chance."

Last season most Pac-10 observers predictably ticketed the Beavers for eighth, ninth or their customary 10th place. Instead they surprised everyone by remaining in the race for second place until the final weekend before the loss at Oregon dropped them to fifth.

This year they won't sneak up on anyone. They've been picked for sixth in the Pac-10 preseason poll, the highest in recent memory.

"I definitely feel we are getting respect," Smith said. "It's kind of a crapshoot with the conference, though; I don't think too many people picked Stanford to go to the Rose Bowl last year.

"You look at those preseason picks, recognize them, but they really don't mean too much."

So, can lightning strike again? Can OSU stay in the upper division and perhaps even move up?

"It will go where we want it to go, just like when I came in here," he said. "We have all the pieces we need. I've got some help with Patrick McCall; we have the play-makers.

"We have the pieces we need. It's on us how far we can take it. I don't think there's a limit. I think we're good enough to stay undefeated."

PRIMARY STRENGTHS: Experienced on offense, with junior Ken Simonton anchoring a strong group of tailbacks, and junior quarterback Jonathan Smith returning for third season as the starter. The offensive line returns three starters and several key reserves and OSU also has a stable of physical tight ends. Also, the entire offense should be more comfortable in the second year with Erickson's system. The secondary is deep and talented, led by senior strong safety Terrence Carroll and sophomore cornerback Dennis Weathersby. As a unit the defense may be the fastest in the Pac-10. Senior punter Mike Fessler is solid and dependable.

POTENTIAL PROBLEMS: OSU must replace both defensive tackles, the starting middle linebacker and several key linebacker backups. The unexpected departure of all-league offensive guard Keith DiDomenico is also a major blow. Also, the Beavers will be without projected starting MLB Tevita Moala until Sept. 9 due to a spring practice knee injury. Receiving and placekicking were inconsistent in 1999 and several first-year receivers probably must make big contributions, especially in the wake of suspensions to projected starting slotback Robert Prescott and backups James Newson and Junior Adams because of an off-season incident. There is no experienced backup quarterback.

OVERVIEW: Now that OSU has ended its 28-season losing streak, a return to mediocrity would be disappointing, especially considering that 17 players who started at least three games are back. OSU should make even more positive strides in its second year under Erickson, and is shooting for another upper-division Pac-10 finish and a mainland bowl. It's an optimistic goal, but one that should be attainable if the Beavers sweep their non-league games.

Commentary: Memories of the 2000 football season

I had been a resident of Corvallis for just over a year when the 2000 college football season began.

Oregon State head coach Dennis Erickson answers questions from television reporters at Reser Stadium back in 2000. Erickson was in his second season with the Beavers during that campaign and they were coming off the first winning season in 28 years.

Dennis Erickson led the Beavers to a bowl game in his first season as head coach in 1999.