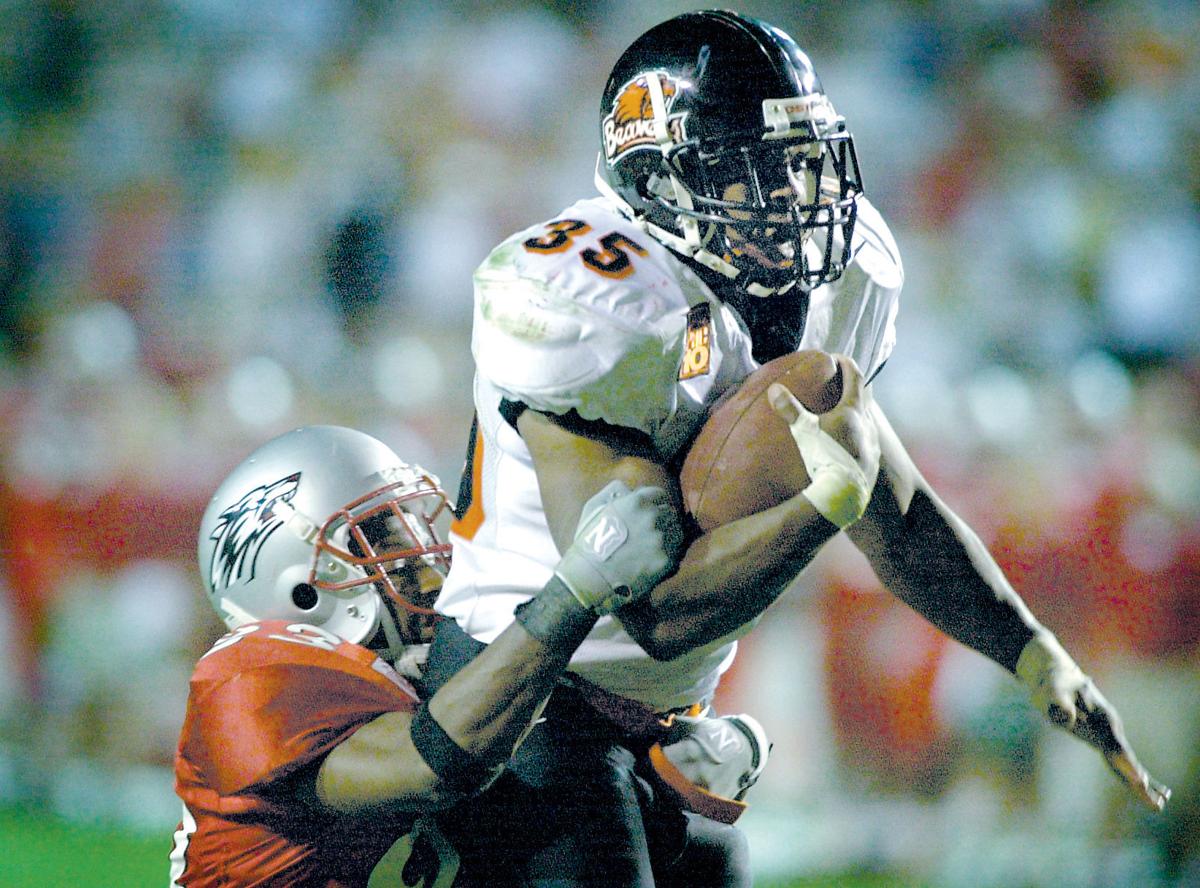 Ken Simonton drags New Mexico's Stephen Persley across the goal line to score  what would be the game-winning touchdown for Oregon State. 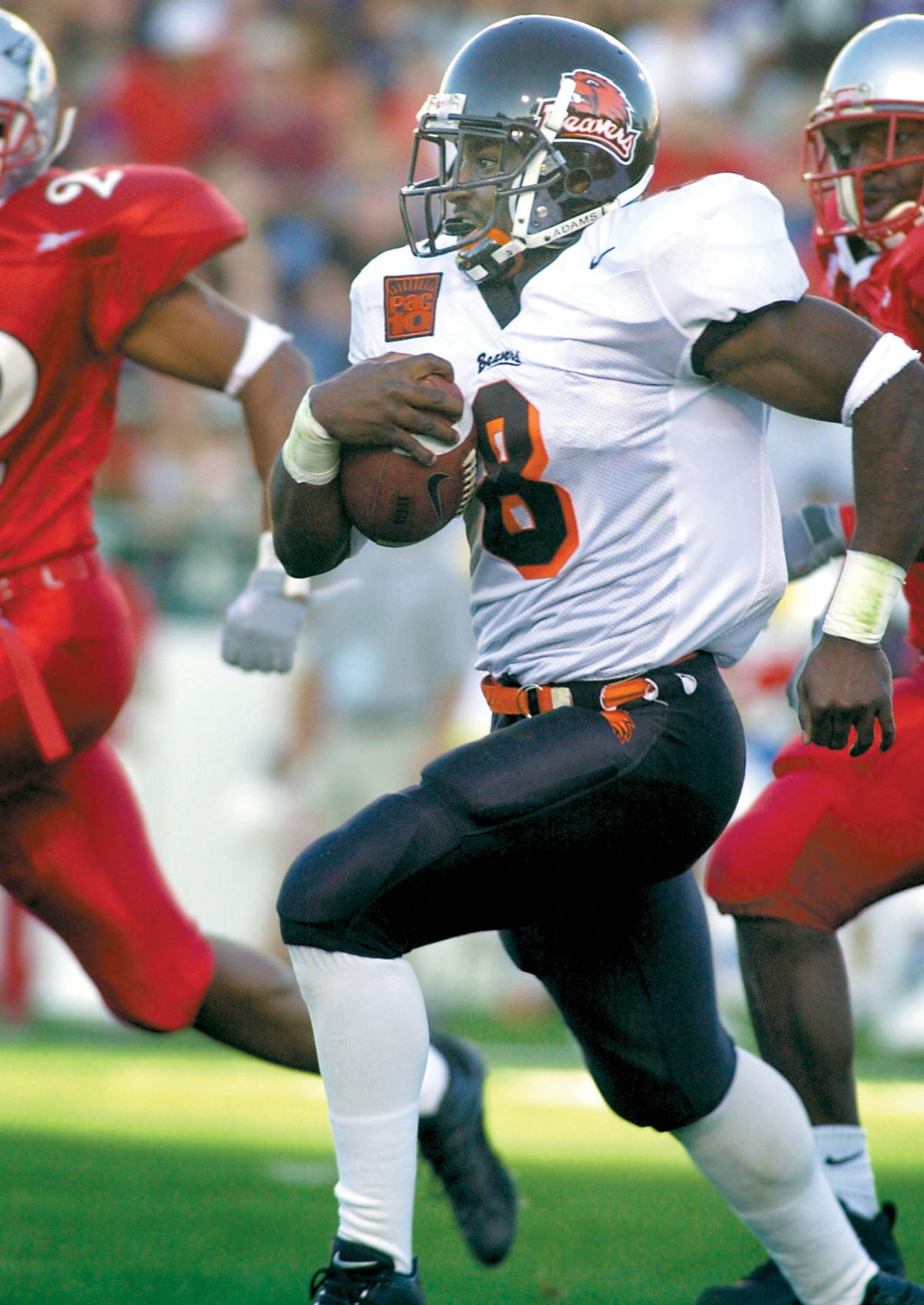 Patrick McCall had a 42-yard run for the Beavers. 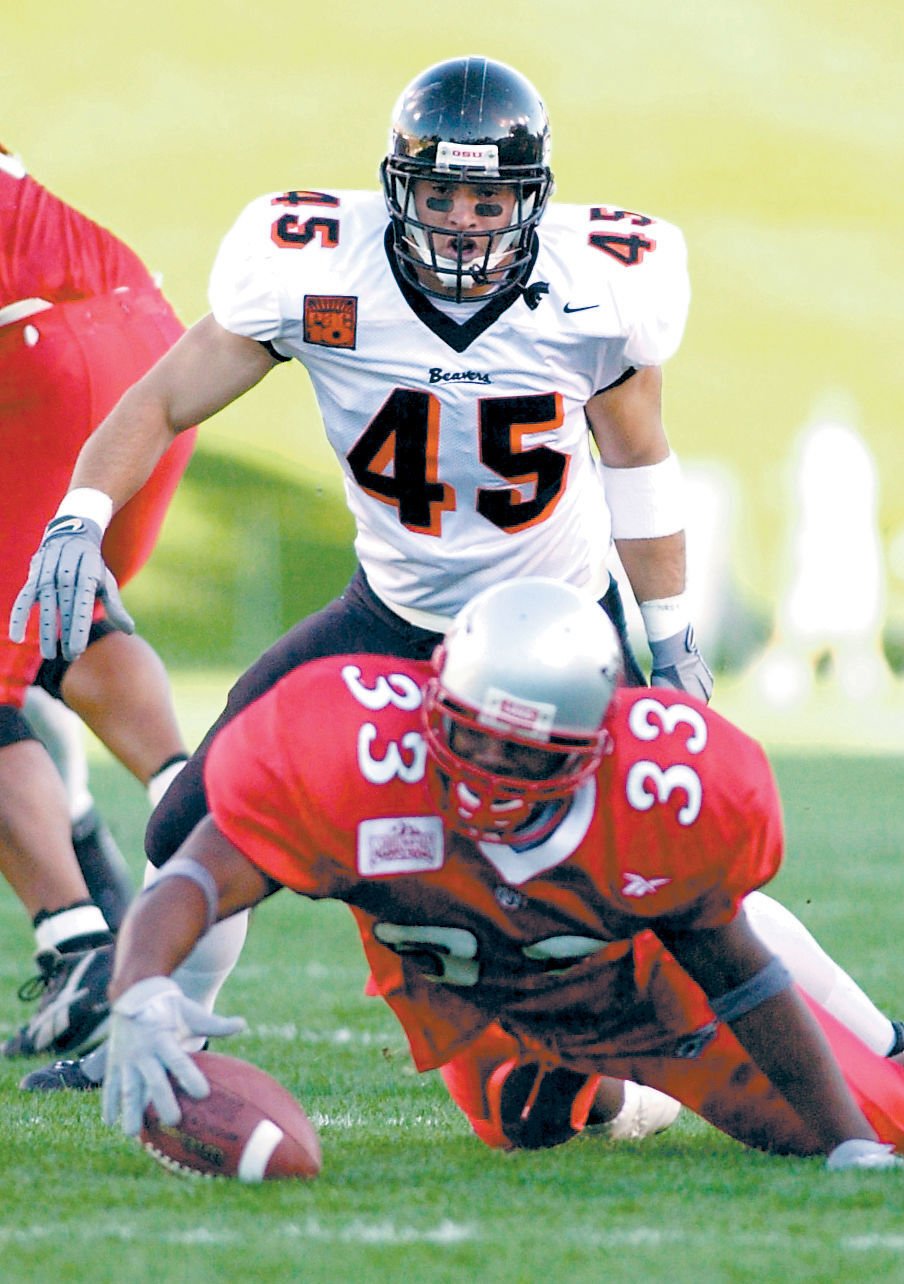 For the second straight week, Ken Simonton saved the day.

The Beavers (2-0) pulled out a 28-20 win over New Mexico at University Stadium on Saturday evening, sparked by the running of Simonton, who set up one fourth-quarter touchdown and scored another.

Simonton finished with 184 yards on 30 carries, 10 less than it took him to rack up 200 yards and OSU’s win over Eastern Washington last week.

Trailing the underdog Lobos 20-14 going into the fourth quarter, the Beavers went to their bread-and-butter back, and marched 65 yards in nine plays to take the lead on Houshmandzadeh’s 9-yard catch with 11:37 left in the game.

Simonton carried five times for 50 yards on the drive.

Houshmandzadeh said it was the same pattern he ran last week when EWU defensive back Ole Olesen intercepted the ball and returned it 90 yards.

“It was the same one that we threw last week, and the dude ran it back,” Houshmandzadeh said. “Same exact play. It was pretty much the same type of coverage, it's just that Jonathan (Smith) threw it outside where I could at least get my hands on it.”

The clincher came more than 10 minutes later. The beavers faced fourth-and-1 from the New Mexico 43 with 1:19 remaining. Coach Dennis Erickson had sent Simonton into the line on an earlier fourth-and-1 play, and he was stood up for no gain.

This time, Simonton broke through an opening and outran the defensive backs for a score.

The Lobos made a last-minute charge down the field and reached the OSU 39 with 20 seconds left. But Keith Heyward-Johnson intercepted UNM quarterback Rudy Caamano.

“We have any more like this and my hair will turn white,” OSU coach Dennis Erickson said. “I haven't gone for it on fourth-and-1 twice in one game.”

The Beavers had another sluggish start when Ricky Walker had the ball knocked out of his hands while attempting to return the Lobos’ first punt of the game. Kirk Robbins made the recovery for UNM at the OSU 20, and the Lobos scored two plays later, when Caamano rolled to his right, then turned and tossed a pass against the grain to a wide open Holmon Wiggins for a 19-yard score.

The Beavers tied it at 7-7 a couple of possessions later when UNM wide receiver Larry Davis tried a pass off a reverse, but found DeLawrence Grant in his face. Grant’s hit popped the ball loose and Darnell Robinson made the recovery at the OSU 36.

Three runs by Simonton brought the ball to the Lobos’ 43, where Patrick McCall broke through on the first big run of for the Beavers on a third-and-2 play that went to the one. Simonton finished the job two plays later.

The OSU defense seemed to have things in hand by the end of the first quarter. The Beavers held in Mexico to 14 yards of total offense on 10 plays.

New Mexico finished with 172 total yards, 42 on the ground.

“I think there was an improvement in the second half, “Erickson said. “The first half, we gave them points, had a punt blocked, we fumbled a punt and the (UNM) kicking game killed us. In the second half, we were in a situation of being on the road and behind and I think we came out and played better football.”

Ken Simonton drags New Mexico's Stephen Persley across the goal line to score  what would be the game-winning touchdown for Oregon State.

Patrick McCall had a 42-yard run for the Beavers.