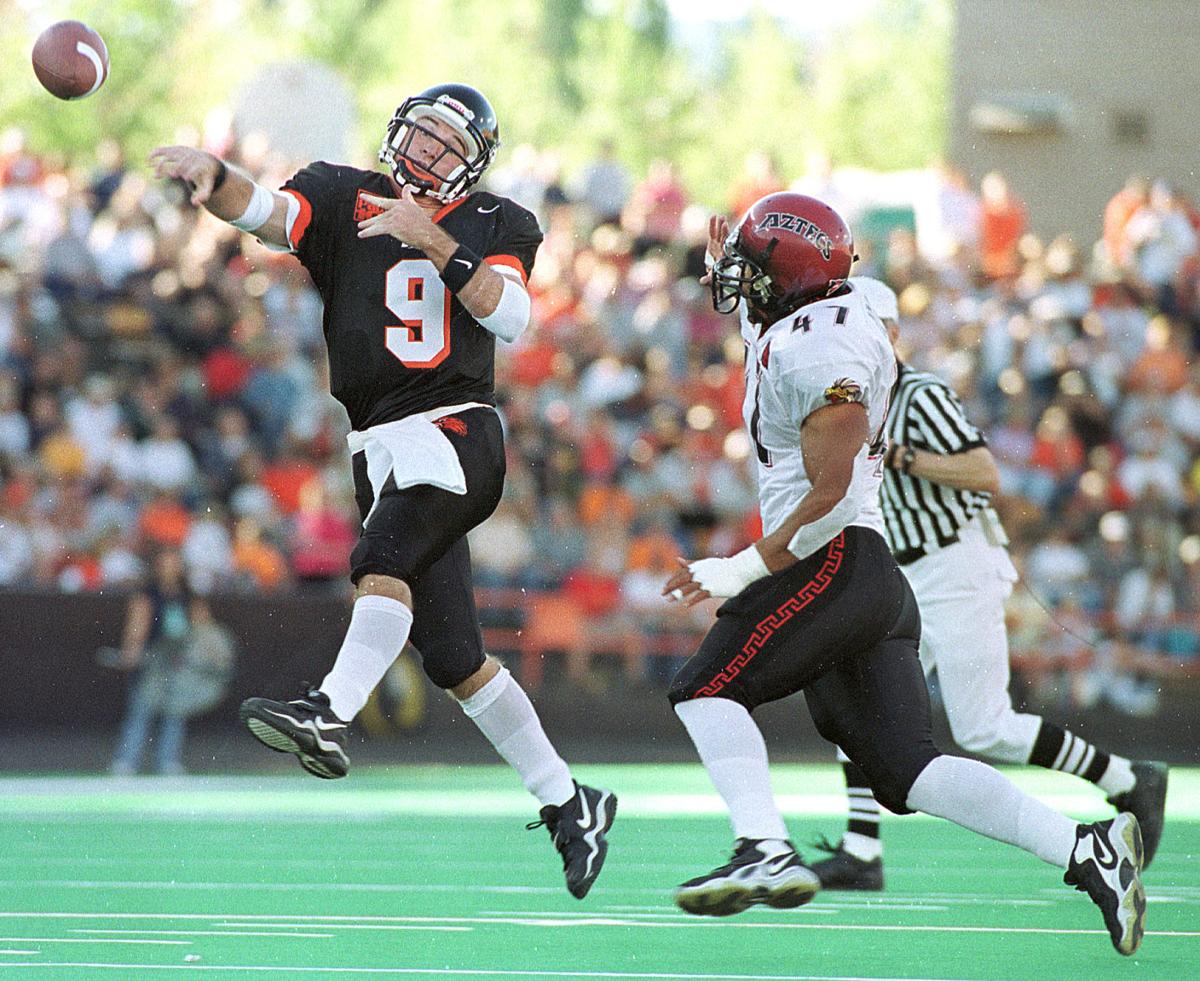 Jonathan Smith Throws a pass against San Diego State back in the 2000 season. The Beavers beat the Aztecs 35-3 to improve to 3-0. Smith passed for 172 yards and one touchdown. 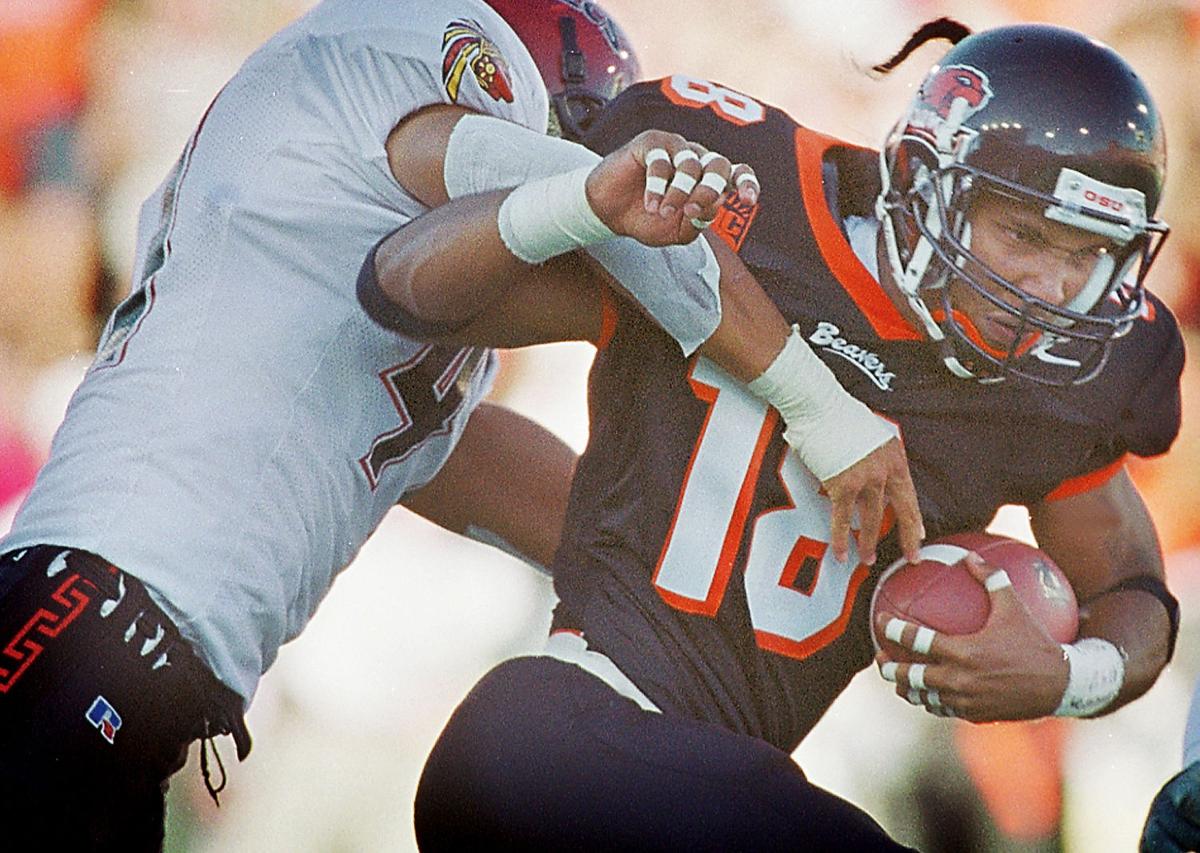 T.J. Houshmandzadeh fights off an Aztecs defender in the win over San Diego State. He had a bug punt return to help set up a touchdown to put the Beavers up 21-3.

They took it away.

On a Saturday when San Diego State was looking for its first victory and hopeful that Oregon State would stagger for a third straight game, the Beavers simply stole their hopes away.

OSU (3-0) rolled to a 35-3 victory over the Aztecs before 32,027 fans at Reser Stadium, sparked by a defense that had 17 tackles for loss, five sacks and six turnovers, including a fumble recovery for a touchdown.

Offensively, the Beavers were balanced, with 183 yards passing and 153 rushing. Running back Ken Simonton, who had 70 carries in the first two games, finished with 91 yards on 18 attempts and two touchdowns.

"I thought it was a tremendous improvement as a football team from two weeks ago," OSU coach Dennis Erickson said. "Defensively, obviously, by looking at the stats, the sacks and turnovers, was a key and that's how our football team is. That's how we are going to be all year and when we play like that on defense, we can play against anybody.

"I thought offensively we executed extremely well, for the most part. I thought Jonathan (Smith) probably played his best game. He threw the football real well, had some drops which were things that hurt us, but other than that I thought we mixed it up real well as far as running play action pass."

The OSU defensive line and linebackers shot through gaps in the Aztecs' line all afternoon, hammering running back Larry Ned. He finished with 42 yards on 21 carries and lost 21 yards of ground.

"That's been our focus since fall camp," safety Terrence Carroll said. "We need to score points on defense, create turnovers. We've got a very potent offense, and if we get the ball in their hands, we expect points to be put on the board."

That's exactly what the OSU offense did.

It appeared as if the Beavers would struggle for the third straight game on offense when three first-quarter drives sputtered out and the Aztecs took a 3-0 lead on a 49-yard field goal by Nate Tandberg.

Smith then began his first hot streak of the season, hitting tight end Marty Maurer for seven yards, Shawn Kintner for nine, T.J. Houshmandzadeh for 22 and Maurer again for 13 and a first down at the SDSU 24.

Antonio Battle lost two yards on a run, but Beavers fans then got their first glimpse of receiver Chad Johnson's talent when he raced past a defender, turned and grabbed Smith's pass while backpedaling into the back corner of the end zone for a 26-yard score.

Smith hit 14 of 27 passes for 172 yards and the touchdown. Johnson led OSU with four catches for 57 yards.

"Chad Johnson showed you a little bit about what he can be about as time goes on," Erickson said. "He really improved and has worked real hard. I really believe you've just seen the beginning of Chad Johnson. He can be a real threat for us and that's a real key."

The defense was quick to match the offense on the Aztecs' next possession. After Ned was brought down for a two-yard loss, linebacker Richard Seigler charged in on Sherriff and pulled him down for a eight-yard sack to the San Diego State five. Ned took the handoff on third-and-long but defensive end DeLawrence Grant slammed into him and stripped the ball away. The ball bounced into the end zone where linebacker Nick Barnett covered it for a 14-3 lead.

"Nick is a go-getter, you know," Seigler said. "He (saw) the ball on the ground, jumped on it in the end zone. It was a great effort.

"The defense always comes out on fire. It's a race to the ball and we knew that sooner or later our offense was going to get it together, start moving the ball and put points on the board."

After Seigler's second sack of the game snuffed another SDSU drive late in the half, Houshmandzadeh caught the punt, dodged one tackler, slipped to the outside and then raced back to the middle before being knocked down 48 yards later at the Aztecs' 20. Three straight runs by Simonton and it was 21-3.

Siegler got the Beavers off to a quick start in the second half by intercepting a Sheriff pass and returning it one yard to the Aztecs' 23 after pressure by defensive end LaDairis Jackson. Simonton had his second one-yard score after two 11-yard runs.

Patrick McCall capped the scoring on the next possession after Carroll broke on a pass, made the pick but fell to the turf despite a clear field to the end zone.

Jonathan Smith Throws a pass against San Diego State back in the 2000 season. The Beavers beat the Aztecs 35-3 to improve to 3-0. Smith passed for 172 yards and one touchdown.

T.J. Houshmandzadeh fights off an Aztecs defender in the win over San Diego State. He had a bug punt return to help set up a touchdown to put the Beavers up 21-3.