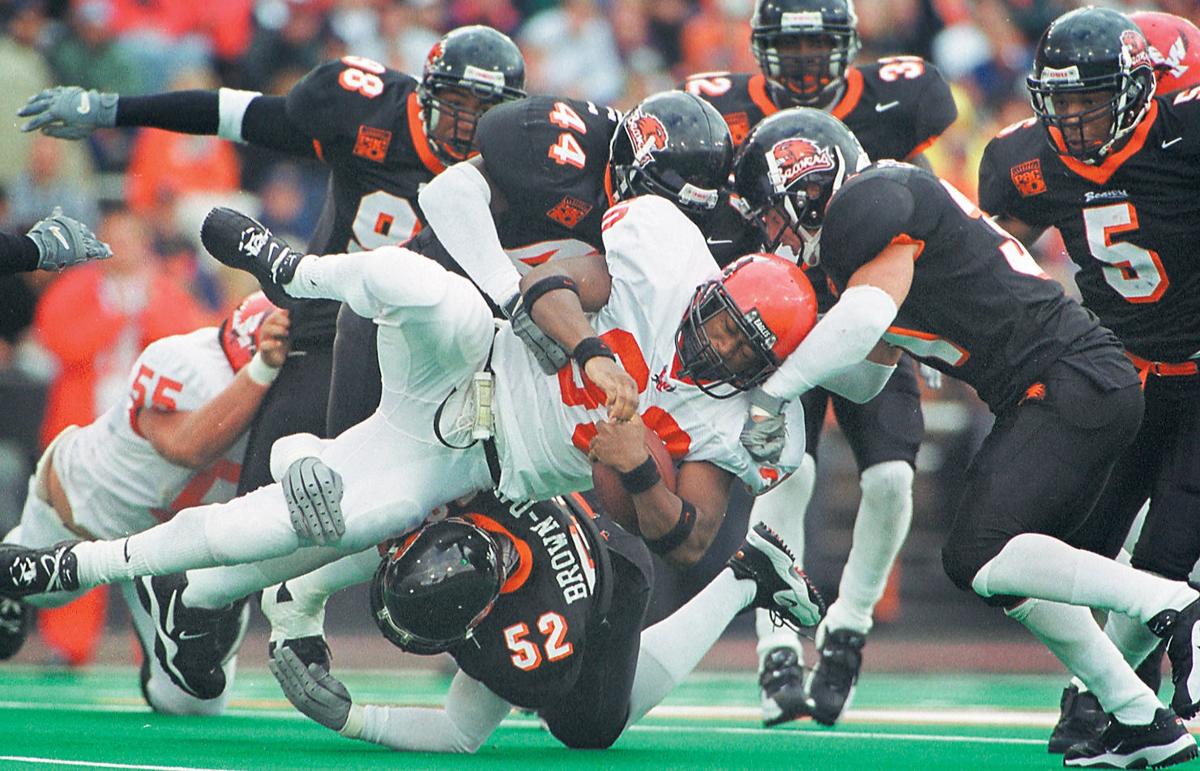 Greg Brown-Davis brings down an Eastern Washington running back as other OSU defenders swarm in to help. The Beavers held the Eagles to 197 total yards and held on for a 21-19 win to start the 2000 season. 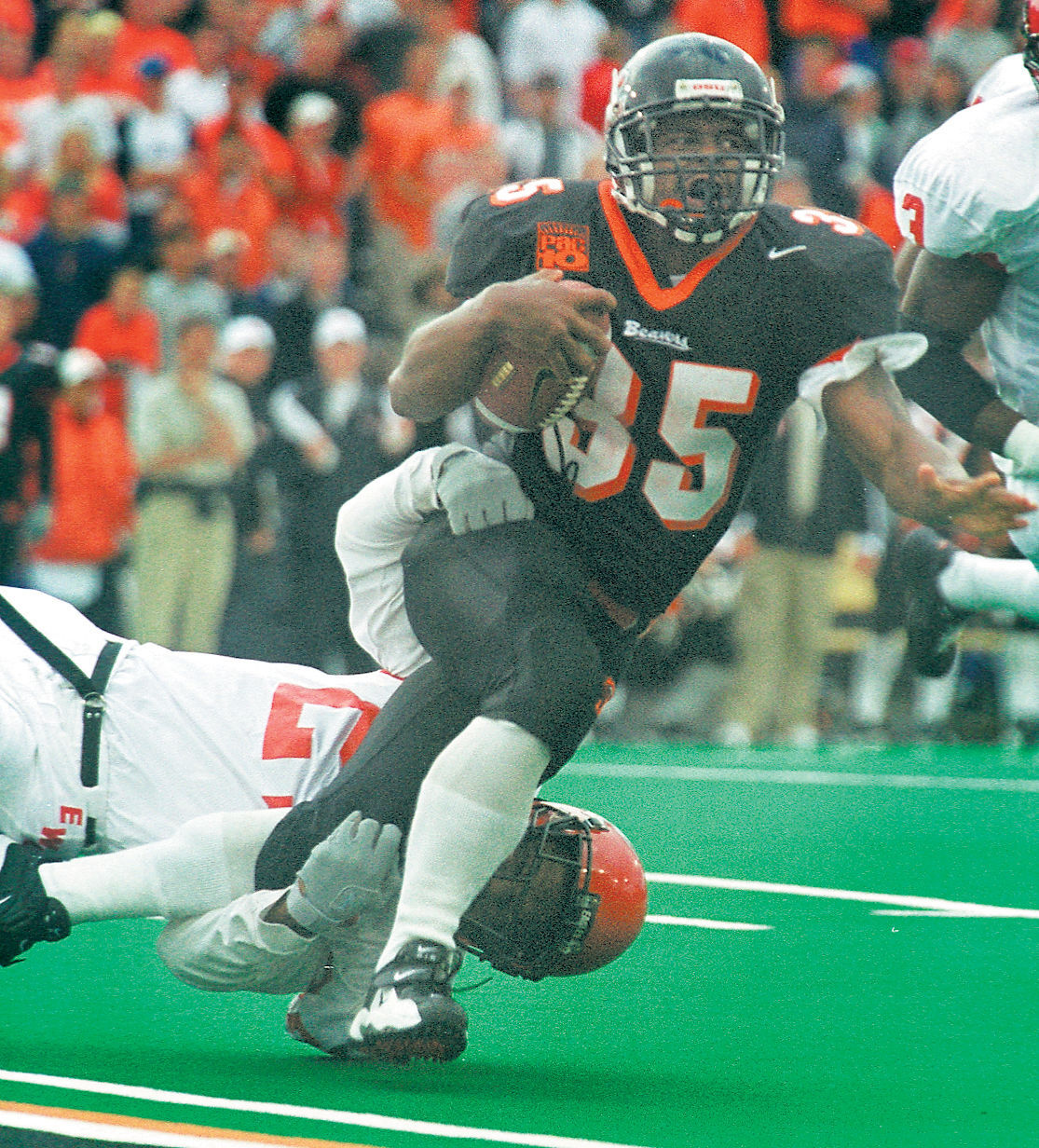 Ken Simonton rushes for some of his 200 yards against Eastern Washington.

Many Beaver believers expected OSU to finish off Division I-AA Eastern Washington in a few short quarters and give some playing time to those third-stringers. Instead, it was the type of game that left the 30,782 fans packing Reser Stadium wiping their brows and sighing a collective "Whew."

The Beavers slipped past the Eagles 21-19 and averted what would have been a stunning loss for a program many view as being on the rise.

The Beavers did shut down the Eagles most of the game. OSU finished with 326 yards and held EWU to 197, but the Beavers sputtered on offense as quarterback Jonathan Smith misfired on 16 of his 29 attempts, including two interceptions.

The running game was a different story. Ken Simonton charged to 200 yards on 40 carries and scored all three of OSU's touchdowns to overcome a sputtering passing game and salvage the win. Simonton became the Beavers' all-time leading rusher with 2,714 yards on a 21-yard run in the second quarter.

Without Simonton, the Beavers could have been in trouble. The problems started early. Drives were slowed or snuffed out by incomplete passes, a fumble and a holding penalty in the first half. The Beavers did manage to put together a six play, 53-yard scoring drive with five carries, including a three-yard score, by Simonton with 4:23 left in the second quarter to take a 7-3 lead which held up at the half.

"We obviously weren't ready to play," Maurer said. "I thought we practiced hard, everybody thought we had a good camp, we thought we came out and practiced this week. Obviously we didn't. We just need to pick the tempo up in practice, we need to figure out what's going on right now and come out with a little more intensity.

"I just don't think maybe we got as much work done in practice this week as we thought. Maybe we fooled ourselves thought we worked hard enough and obviously we didn't. That should not happen out there and it will not happen around here."

Instead of regrouping and coming out with several quick scores in the second half, the Beavers continued to struggle.

Smith hit Maurer over the middle for a 15-yard gain to the 50 to start the half, but after Simonton was held to no gain, Smith tossed a backwards pass down the line of scrimmage to T.J. Houshmandzadeh. The ball fell incomplete and was scooped up by Claude Jean-Baptiste and returned 15 yards.

The Beavers held, but EWU's punt was downed at the OSU two. The Beavers moved out to the 19 before Smith overthrew Houshmandzadeh and was intercepted by Julian Williams, who took it to the OSU 18. A field goal by Troy Griggs cut OSU's lead to 7-6.

The Beavers made it 14-6 on the next possession with Simonton carrying six of 11 plays. Smith hit Seth Trimmer with a 15-yard pass on third-and-four and hooked up with Maurer over the middle a few plays later for 17 yards. Simonton took it in the next play from 17 yards out, bouncing to the outside and taking advantage of a Houshmandzadeh block near the goal line to slip into the corner of the end zone.

It looked like the Beavers would blow the game open just a moment later when the Eagles took over at their own 10 after being flagged for holding on the kickoff return. LaDairis Jackson put a crunching tackle on running back Jovan Griffith, the ball popped loose and Darnell Robinson covered it for the Beavers at the eight.

Robinson led OSU with 12 tackles and one sack.

Cheers quickly turned to gasps of dismay two plays later when Smith threw the ball across the field and was interception by Ole Olesen. Olesen sprinted down the sidelines followed by Houshmandzadeh, who finally dragged down the defensive back 90 yards downfield. Jesse Chatman dive over OSU's defensive line from two-yards out made it 14-12 with 3:48 left in the third.

"I'm very disappointed in our play," OSU coach Dennis Erickson said. "I thought we executed very poorly offensively, probably as bad as I've seen us execute since I've been here for whatever reason. We didn't practice like that during the week but that's how it was."

Smith shouldered much of the blame for the poor passing performance. He said the line blocked well for the running game and gave him enough protection on passes, but he simply could not throw the ball where it had to be thrown.

"Obviously I didn't play well at all," he said. "I wasn't too disappointed in my decision making, I thought I made good decision (but) did not throw the ball accurately. All day. From the first snap to the last one, it was just inaccuracy. I had good time (to throw), a lot of times guys were open, I just flat out missed them.

"I thought offensively we played well, besides the quarterback and oftentimes it doesn't look like you played that well when your quarterback plays like crap and I think that was the issue today."

Simonton scored his third touchdown with just 3:34 to play with a 14-yard run. The Beavers weren't out of the woods yet.

The Eagles put together their only extended drive of the game against OSU's defense when quarterback Fred Salanoa tossed a 24-yard pass to Lance Ballew and followed it up with a 31-yarder to Joe Levens. Salanoa took it in himself from eight yards out to make it 21-19.

"I thought defensively we played very, very well at times, but there were times that we gave up some things, particularly that last drive," Erickson said. "When the game should have been out of touch and we gave it up defensively and they went and scored … shoot, we're lucky enough to win the darn football game."

Commentary: Memories of the 2000 football season

I had been a resident of Corvallis for just over a year when the 2000 college football season began.

It's encore time for Dennis Erickson.

Greg Brown-Davis brings down an Eastern Washington running back as other OSU defenders swarm in to help. The Beavers held the Eagles to 197 total yards and held on for a 21-19 win to start the 2000 season.

Ken Simonton rushes for some of his 200 yards against Eastern Washington.