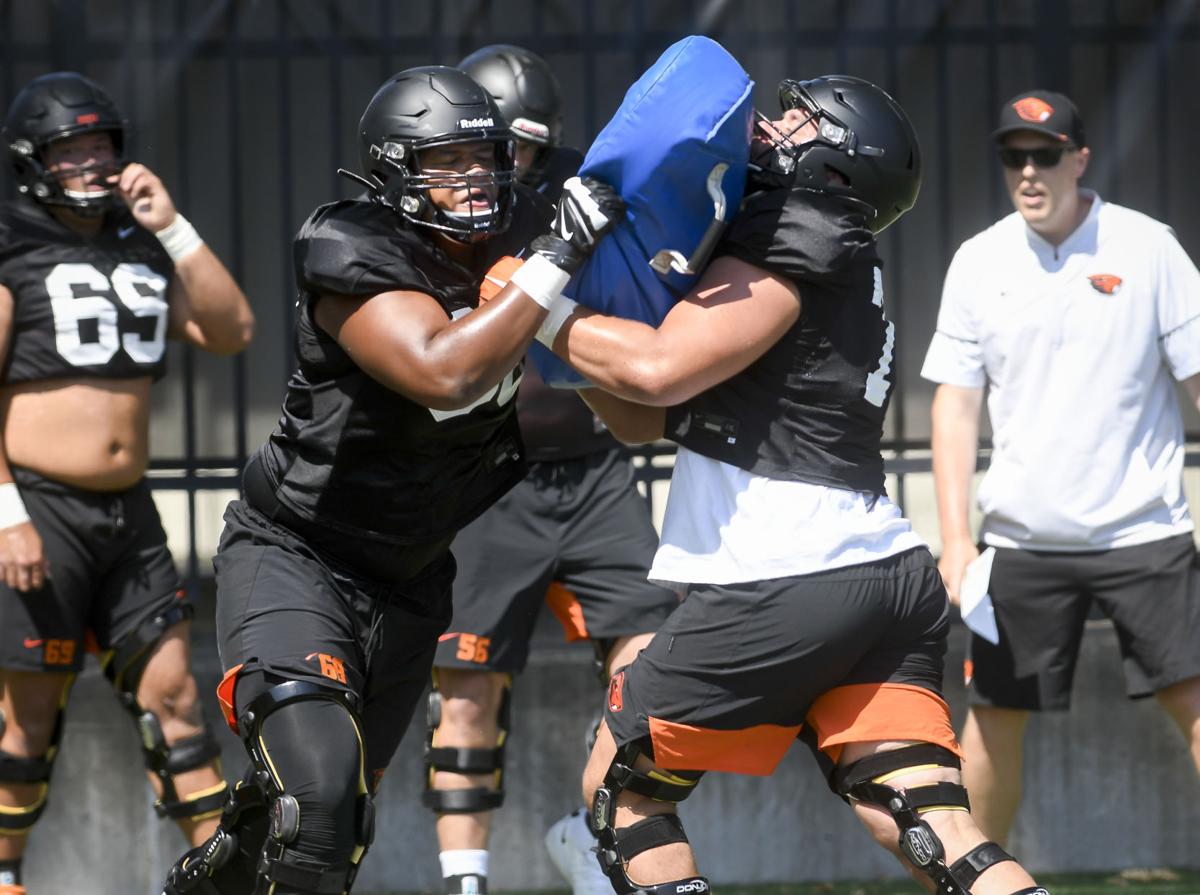 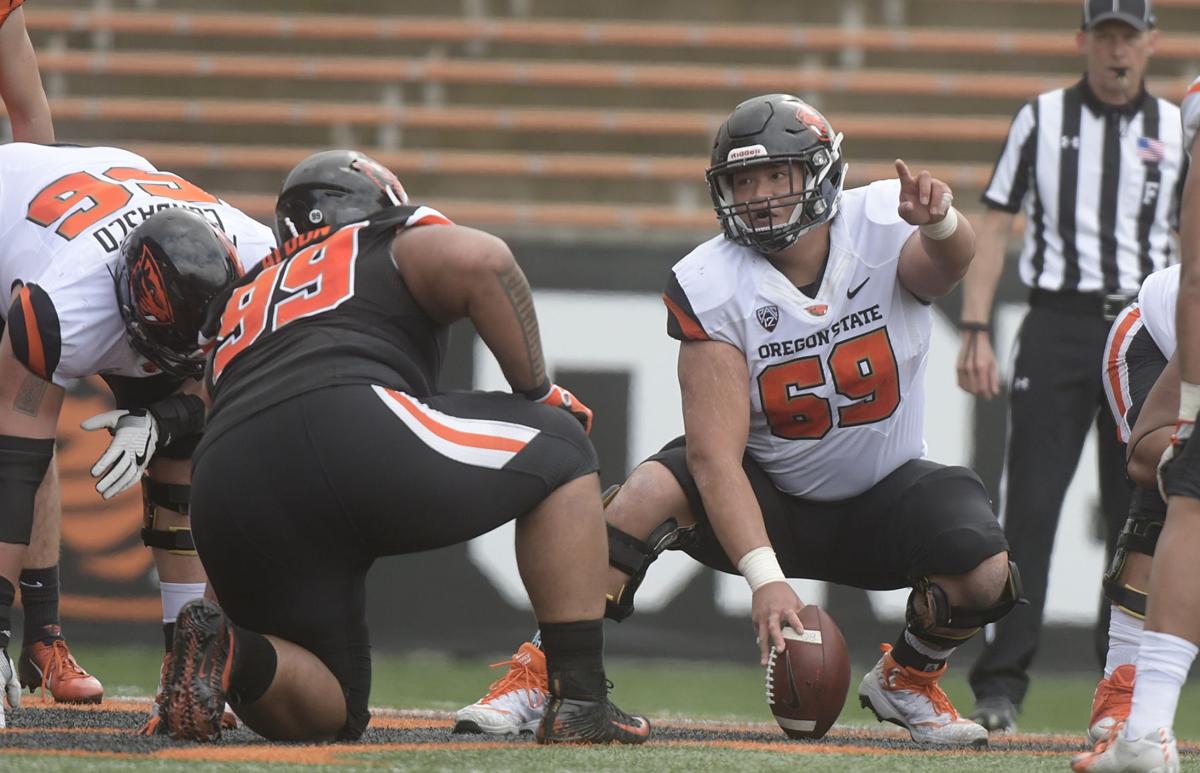 Nous Keobounnam has plenty of experience at center but is working at other spots on the offensive line for the Beavers.

Jim Michalczik likes to tell his players that none of them were born linemen.

During fall camp, Michalczik has watched his linemen group rotate around through various positions as he works to sort out what the best combination of five is. He isn’t concerned with finding the solution to that question anytime soon, though.

For now, he just wants to see them continue that “self-made” process and get better everyday while the position battles sort themselves out.

“I like this group,” Michalczik said. “I like the work ethic. I like the development. I’m not sure who the starting five is — who the next five is yet. We’ve got a lot of competition. We’ve got some guys who give us some flexibility to move around.”

With one scrimmage in the books, Michalczik wants to see a lot more live reps before he starts to make any hard and fast decisions on what the two-deep might look like come Week 1.

“I really don’t even want to worry about it until the end of this week, to be honest with you,” Michalczik said. “Today I was able to kind of just take guys and move them to other sides and move them to other positions and kind of see where we’re at. We still have some time before the first game — that week before the first game it needs to be dialed in. Right now we need to be testing and trying things out and seeing where they fit best.”

Continuing to tinker with combinations during fall camp could serve the Beavers well later this year. Because while OSU’s offensive line lacks game experience, it features plenty of versatility. During a season that might prove to be unpredictable, the ability to chop and change lineups and rotate players through multiple positions could be hugely beneficial.

“I think this year, more than any other going into a season, I’ve had to say, ‘OK, we don’t know what’s going to happen in the future,’” Michalczik said. “So we have to have a lot of position flexibility here. Guys being able to move and play a lot of spots. So we’re kind of putting more on them. But at the same time, we’ve got a group of guys who I think can handle it.”

If you were trying to project what Oregon State’s starting offensive line might look like on Nov. 7, Brandon Kipper at right tackle might be the closest thing to a sure bet.

But Michalczik was non-committal Tuesday when asked if Kipper, who started 12 games on the right in 2019, was locked in at that position.

Head coach Jonathan Smith said last week that he would like to keep Kipper on the right, but that is probably dependent on redshirt freshman Joshua Gray establishing himself at the left tackle position.

Kipper said that the continuity of working with the same coaching staff for a third consecutive season has created a greater sense of cohesion among the position group.

“I think, honestly, it’s a more confident offensive line and our assignment now is we’ve got to go out there and execute in our fundamentals and technique,” Kipper said. “But definitely, the difference between his year and last year is the ability to go out there and not necessarily have to think. Just immediately be able to do.”

Michalczik said Nous Keobounnam has been playing three different positions during training camp, and Jake Levengood could probably play at all five spots. Grad transfer Korbin Sorensen started at left tackle and guard during his time at Portland State, but has primarily been working at the inside positions with the Beavers this fall.

“I’ve got a lot of guys that can play guard and tackle, or center-guard, or center-tackle,” Michalczik said. “I’ve gotta be careful because I’ve got to get the best out of them, not just keep moving them around all the time.”

No clarity on quarterback competition

On Tuesday, Smith went into detail on Oregon State’s four quarterbacks and talked about how each one has fared in the early part of camp.

Wednesday, OSU offensive coordinator Brian Lindgren gave a blunt description of the Beavers’ Saturday scrimmage, saying that he didn’t think any of the OSU’s quarterbacks played great — and that a lack of spring football has left the signal-callers behind where they would normally be.

“Yeah, the first scrimmage was pretty rough for the offense as a whole,” Lindgren said. “I thought the defense did a nice job and put pressure on the quarterback. The QB’s and receivers, it just didn’t feel like we didn’t have great timing on a lot of the routes. It was sloppy, in my opinion and not up to our expectations. But without having a spring, you can tell (the defense) is a little bit ahead of us right now.”

Lindgren added that the offense bounced back with its best practice of camp on Wednesday.

He reiterated that Tristan Gebbia probably has a leg up in the quarterback competition and said the redshirt junior was making good decisions during the scrimmage. But he wants to see more from Gebbia before OSU hands him the keys to the offense.

“There were some balls that he missed that we would like him to make,” Lindgren said. “Some of those were when he had a guy giving him a little bit of pressure and he had to slide off his mark. But those are the throws that he’s going to have to make on game day, and that we will need him to make for us. I think he was frustrated a little bit because there were some opportunities that he didn't execute with the target or accuracy.”

Growing up, Korbin Sorensen was always told that versatility could make or break him as an offensive linemen.

Football was back at Reser Stadium Saturday morning — artificial crowd noise and all.

Nous Keobounnam has plenty of experience at center but is working at other spots on the offensive line for the Beavers. 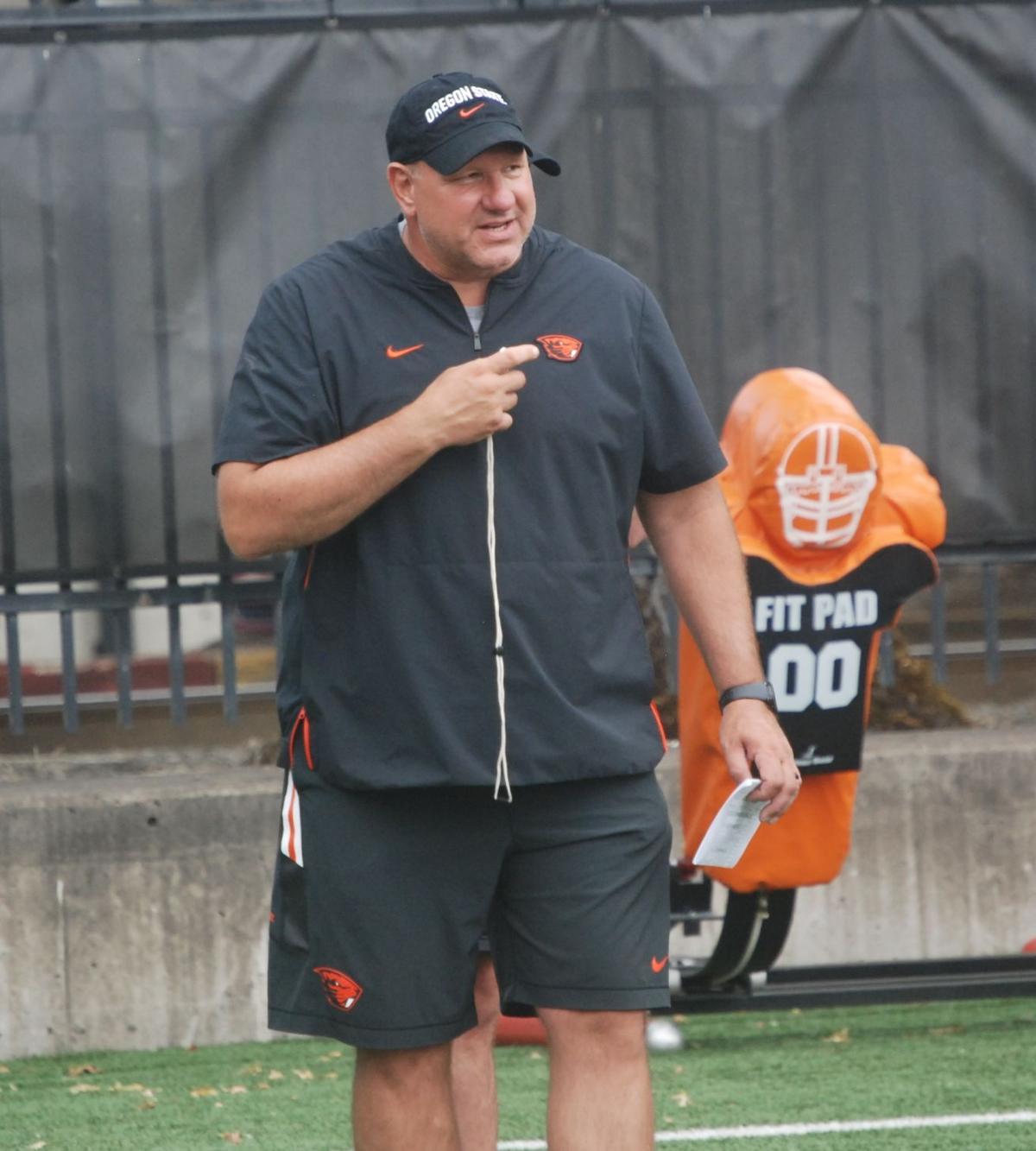