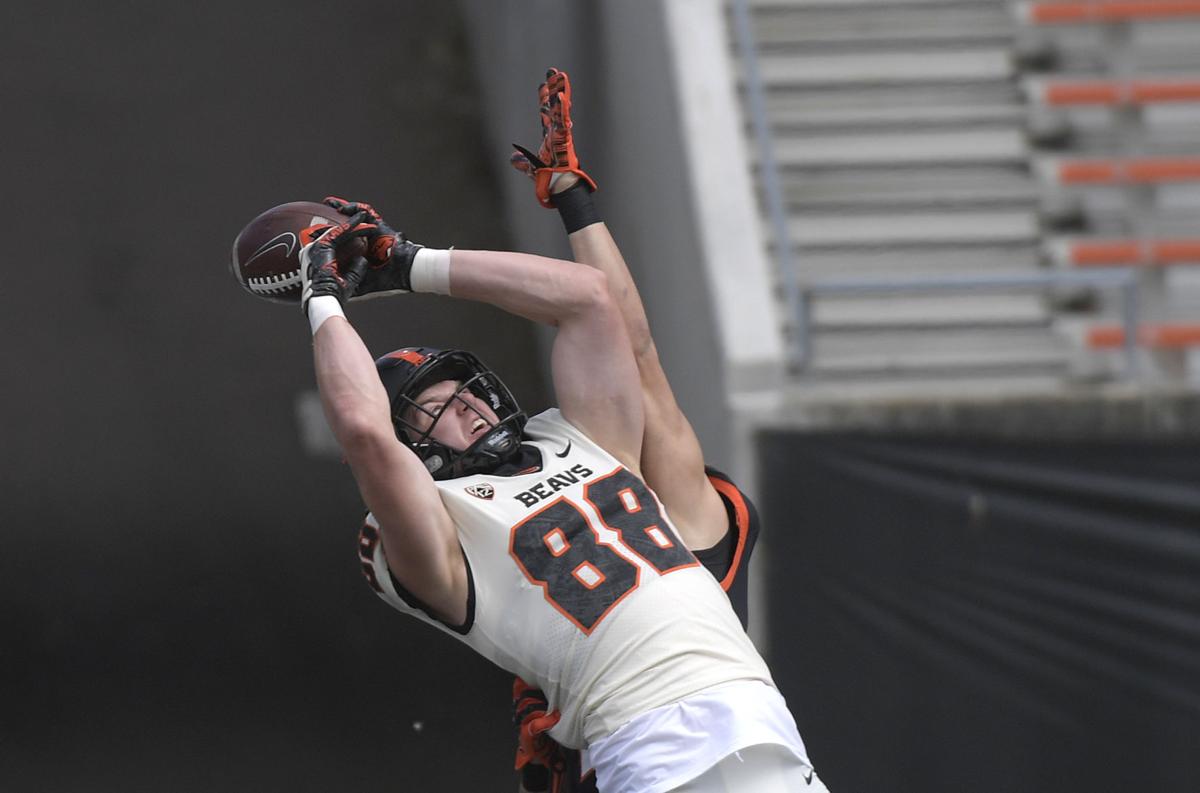 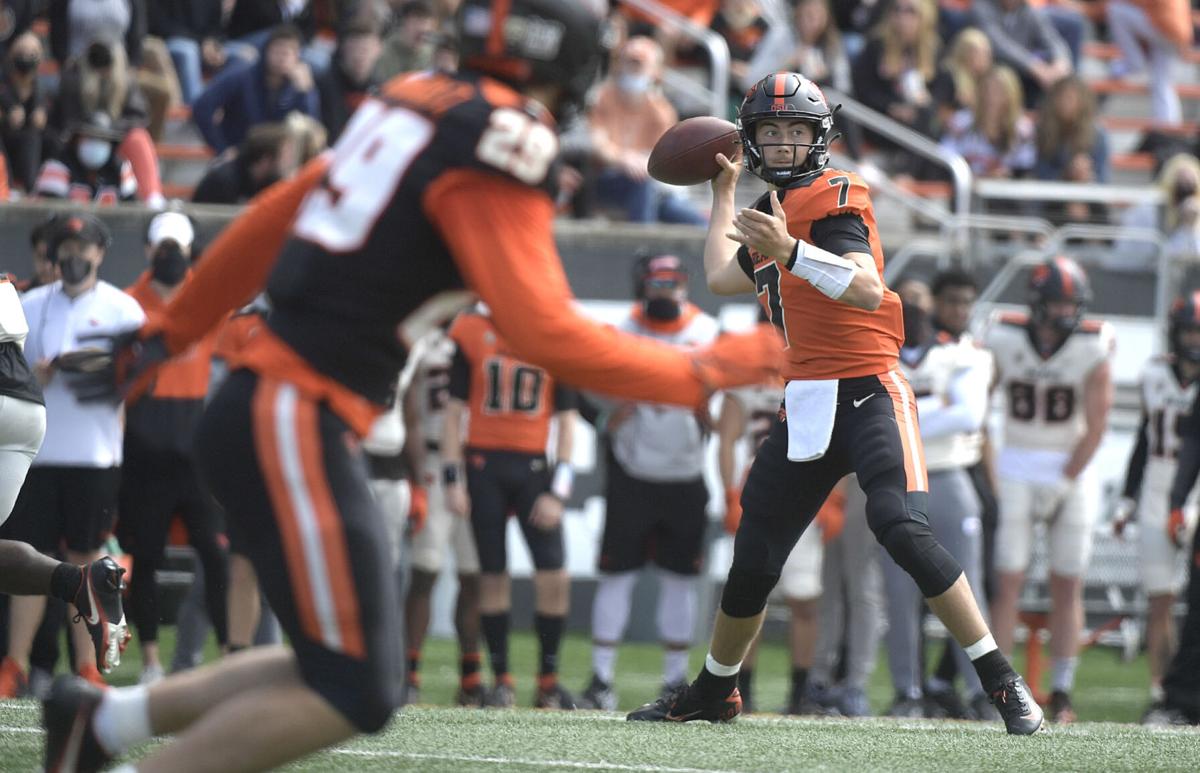 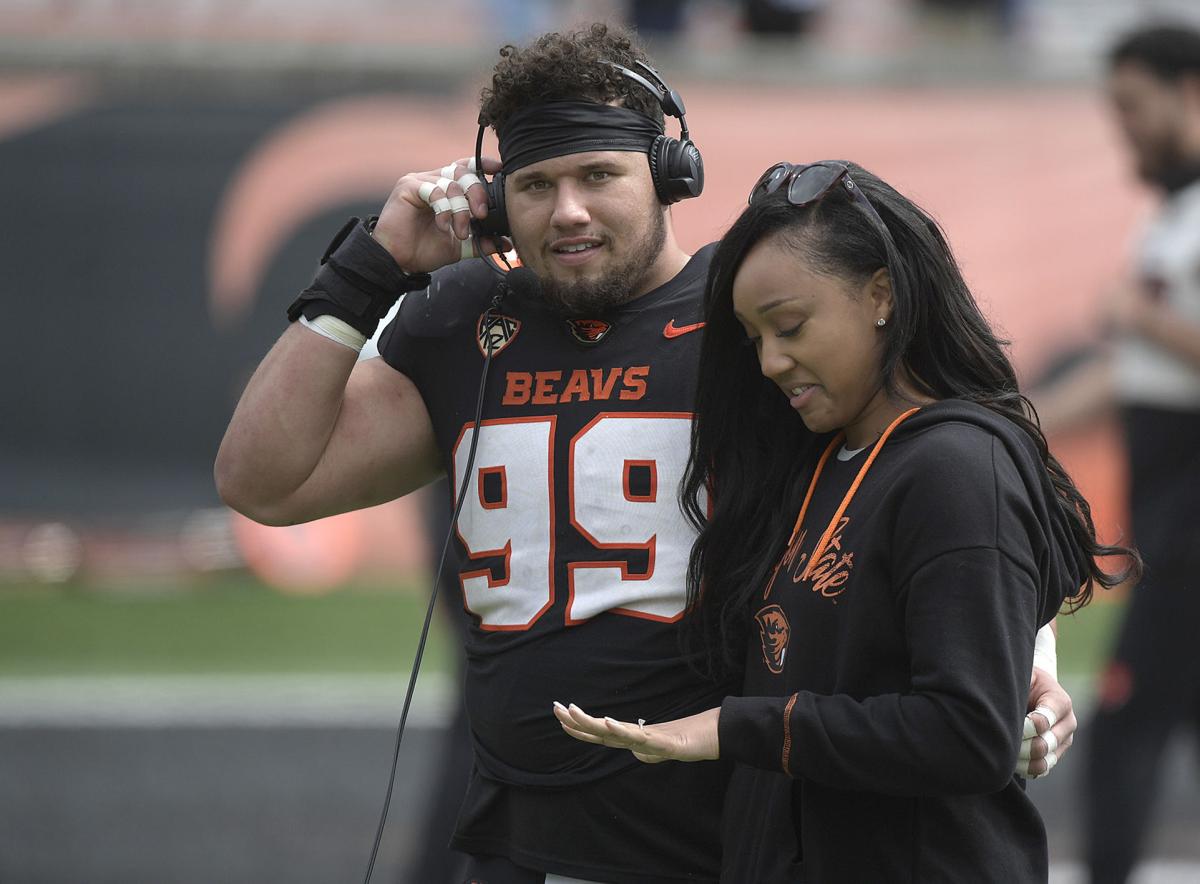 Taylor Lawson checks out her engagement ring as defensive lineman Isaac Hodgins is interviewed about proposing to her at the end of the practice. 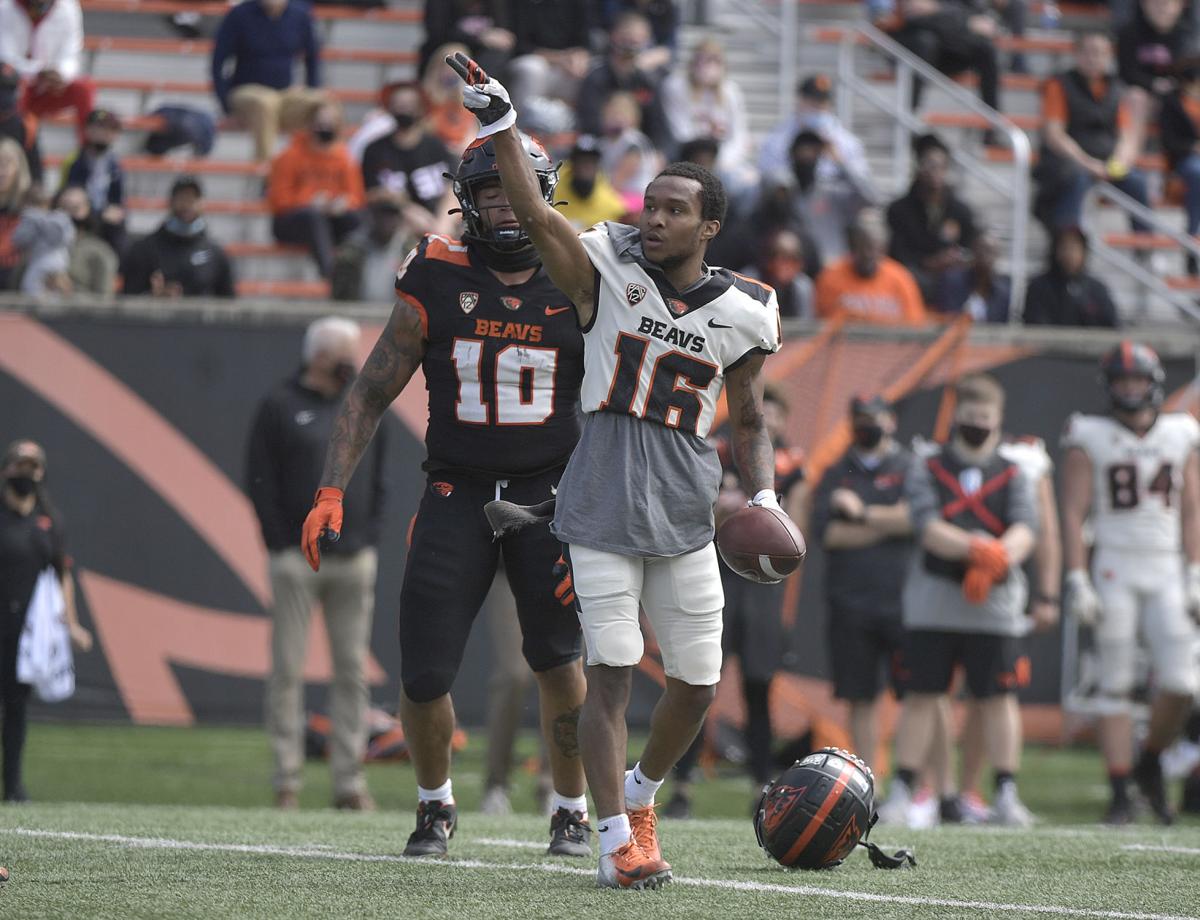 Oregon State's Champ Flemings signals first down after catching a pass in front of Kyrei Fisher.

Oregon State’s final spring practice took place Saturday and featured a myriad of intriguing storylines. With Reser Stadium open to fans for the first time since November 2019, the Beavers ran through drills and 11-on-11 scenarios for just over an hour.

If he had things his way, Oregon State coach Jonathan Smith would have loved to hold a traditional spring game. But the Beavers were severely limited by both injuries and COVID-19 related absences.

Shortly before kickoff, Oregon State released a list of 14 players who were not able to play Saturday due to COVID-19 regulations and contact tracing protocol. That included quarterback Ben Gulbranson, wide receivers Zeriah Beason and Silas Bolden and cornerback Alex Austin.

All told, the Beavers had just five wide receivers dressed for the scrimmage and two quarterbacks.

“In general, I was just really pleased with five weeks of work and how much we’ve gotten done,” Smith said. “It didn’t feel like we needed to push the envelope with that today, that’s why we kept it nice and tight. Again, I thought we got great work done today.”

Because of those injury shortages, Oregon State held its spring game in a rather unconventional format. They ran through some 9-on-9 scenarios that featured strictly running plays, some one-on-one blocking drills, and ran five "live" series of red-zone scrimmage scenarios.

When the scrimmage portion of the event ended, the defense held a 22-13 lead. In five red-zone scenarios, the defense stopped the offense twice, held them to field goals twice and surrendered one touchdown — a 25-yard pass from Chance Nolan to Luke Musgrave.

There was an electric atmosphere on the Oregon State campus that hadn’t been felt for 539 days prior to Saturday. Fans were allowed to enter the stadium at 9:30 a.m. — an hour before kickoff — and flocked to the east side gates in order to get a glimpse of the Beavers.

A large contingent of supporters showed up earlier than that and by the time the scrimmage began a couple thousand fans lined the east side seats.

“It was awesome,” Musgrave said. “It just felt so much better than having those limited fans. It was a much better feeling than what it was during the 2020 season. We were all really happy to have them out there. The energy was just notably higher.”

While there wasn’t an official attendance count, somewhere in the range of 2,000 to 3,000 people came out to watch.

There are plenty of Oregon State players who greatly benefited from a full slate of spring ball. Out of all of them, Sam Vidlak might have gotten the most out of the past five weeks.

Vidlak, a highly-touted in-state quarterback recruit, should technically still be a senior at Hidden Valley High School. Instead, the Oregon State early enrollee is in Corvallis and building a very convincing case for why he should factor into the starting QB competition.

Vidlak looked composed Saturday and flashed a stellar arm while orchestrating the Beavers’ No. 2 offense for most of the afternoon. He completed his first four passes of the day in scrimmage scenarios and went 8-for-13 for 85 yards on the day. That’s a small sample size that looks even smaller when compared to Chance Nolan’s 3-for-6, 45-yard performance. But considering the challenges that Vidlak faces as an early enrollee quarterback, it's an impressive early showing for him from both a physical and mental standpoint.

“He’s better,” Smith said of Vidlak’s progression over the past five weeks. “He’s had a skill set to create, but you could even see it today, how comfortable he was with some of the progressions and managing the game when the clock was running. He played with great poise. He’s gotten better and I think he’s got a great opportunity to make a nice jump now in the summer because he’s been exposed to 15 days of practice and compete in fall camp.

It's important to factor in how many key pieces Oregon State’s offense was missing Saturday. They were without five receivers, including two of their most talented ones in Beason and Tre’Shaun Harrison. Ben Gulbranson could very well be the No. 1 option in the quarterback room right now and he was absent. Along the offensive line, Nathan Eldrige was out with an injury.

Even so, the Beavers’ defense can only play who is in front of it, and it looked much more stout Saturday than it did a year ago. Tim Tibesar’s group flashed a bend, don’t break mentality in 2020 and delivered a couple of key late-game stops in pivotal scenarios. They displayed that philosophy again Saturday.

The front seven kept the running backs from ever becoming a factor. Vidlak and Nolan both had some nice moments, but neither could consistently get comfortable in the pocket. The defensive line consistently forced the pocket to collapse, which is something the Beavers struggled with at times last season.

“I was pleased with the physicality of the defensive front,” Smith said. “I thought we tackled well for the most part. I thought it was competitive and I was appreciative of those guys flying around.”

While Smith, the players and the fans all benefited from being at Reser Saturday, it's safe to say none of them had a better day than Isaac Hodgins.

The Oregon State captain and star defensive linemen capped off the day by proposing to his fiance, Taylor Lawson, at midfield with his teammates surrounding him after the scrimmage ended. Lawson said yes, sending the Beavers players and the crowd into a frenzy.

Hodgins said the plan had been in the works for awhile; he had talked about it with his brother, former Oregon State star Isaiah Hodgins, and decided Saturday was the day. He brought the plan to Smith last week and got the OK, but said that only a few teammates knew the proposal was coming.

As both Hodgins and Lawson spoke with reporters via Zoom after the scrimmage, Hodgins said he was nervous from the moment he woke up at 5 a.m. Saturday.

“I could concentrate (on the scrimmage), but it was hard,” he said. “I just kept thinking about it. But I was able to go about my business and concentrate on my game.”

The two have been together for about three months, Hodgins said. Lawson is a gymnast at Stanford who is majoring in human biology with a focus in human physiology and sport performance.

“She’s a lot smarter than me,” Hodgins said with a smile.

Some props to look at tonight between the Lightning and Islanders

Some props to look at tonight between the Lightning and Islanders

Look for the under when it comes to Giannis's points prop

Look for the under when it comes to Giannis's points prop

OSU football: Silas Bolden emerging as another receiving threat for Beavers this spring

No Oregon State football player has made more of the spring season than Silas Bolden.

Friday was a must-win game for Oregon State — or at least as much as one can be at this point in the season.

Despite coming away with a pivotal series victory, there was no celebration in the Oregon State clubhouse Sunday.

Taylor Lawson checks out her engagement ring as defensive lineman Isaac Hodgins is interviewed about proposing to her at the end of the practice.

Oregon State's Champ Flemings signals first down after catching a pass in front of Kyrei Fisher.