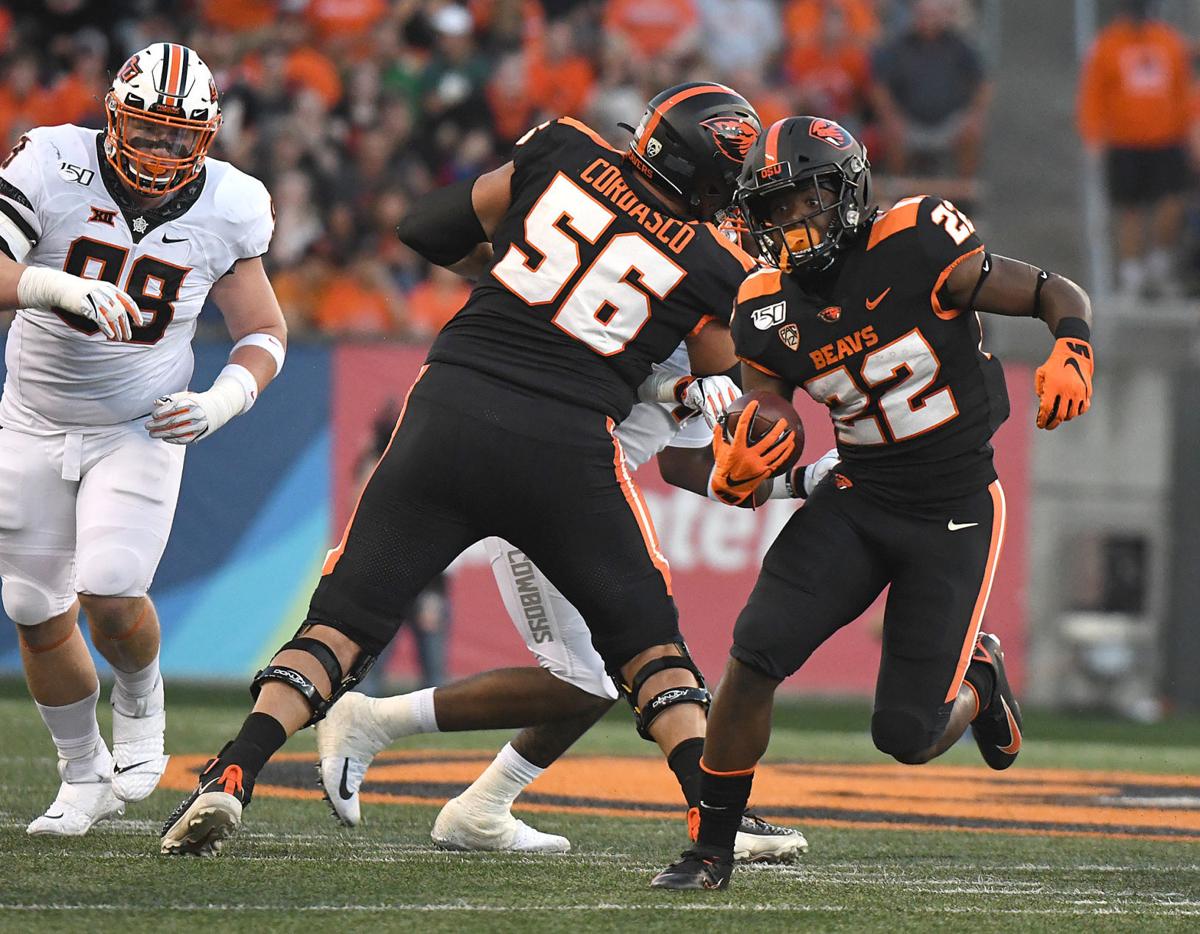 Oregon State hopes to have a healthy Jermar Jefferson for Saturday's Pac-12 opener against Stanford. 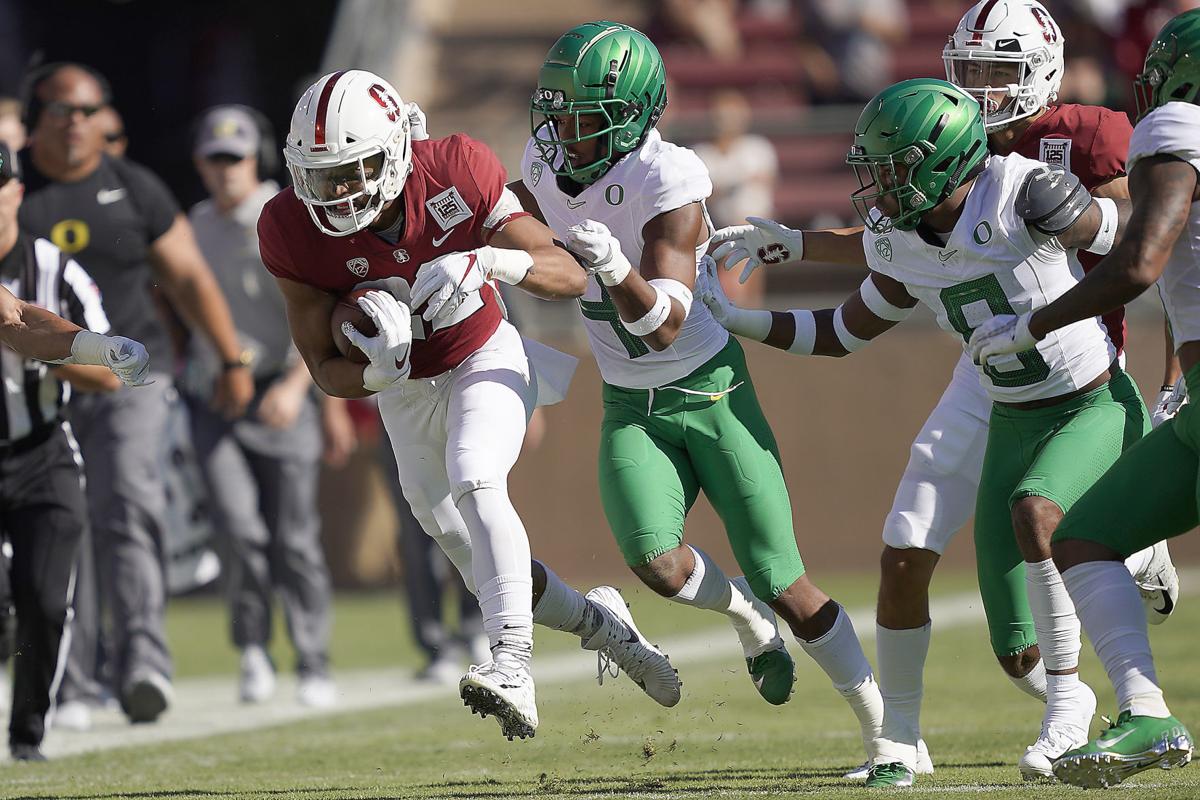 Stanford running back Cameron Scarlett, left, is averaging just over 80 yards rushing per game this season. 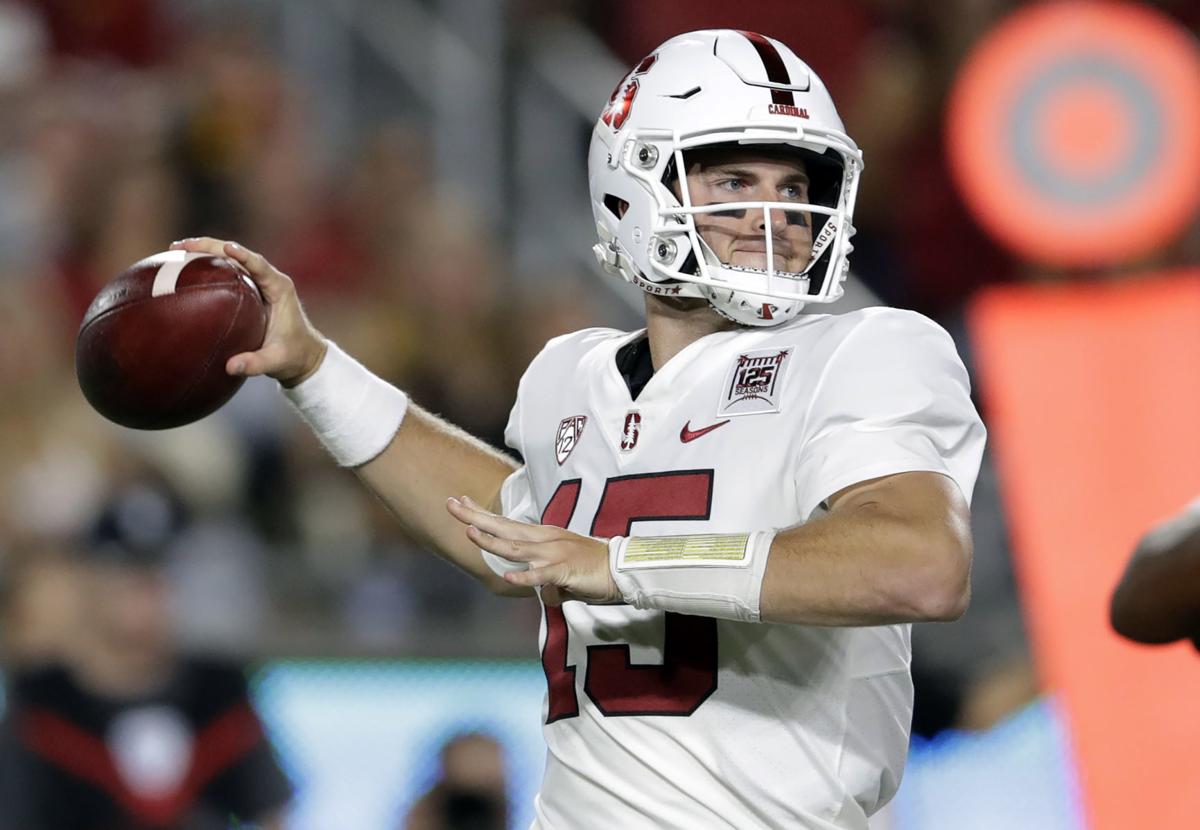 Stanford quarterback Davis Mills will get the start for the Cardinal on Saturday at Oregon State. He has completed 32 of 55 passes for 352 yards this season.

If there was any concern about a bye week slowing down the Oregon State football team’s momentum coming off its first win of the season, that was put to rest early in the week.

“I think guys came in here with the right mindset, we got after it on Sunday, guys were here, ready to work,” receiver Champ Flemings said Tuesday.

The Beavers want to carry the momentum created from a 45-7 victory over Cal Poly two Saturdays ago when they take on Stanford inside Reser Stadium this Saturday at 4 p.m. in the Pac-12 opener for OSU.

“I think coach (Jonathan) Smith has kept us locked in, we’ve been really preparing for Stanford, getting after it and practicing hard and so I think we’ll come out ready to go,” quarterback Jake Luton said.

“It would be huge, especially starting off Pac-12 play 1-0 and getting that first Pac-12 win at home in front of the fans,” receiver Isaiah Hodgins said. “It would really just show our fans how dedicated we are. This could be a win that could change our season.”

While a win no doubt would be big in so many ways for the Beavers (1-2, 0-0), a loss won’t be the end of the season either and Flemings said they have to approach it as just a game and not make it more than it is.

“Not take it as oh we have to win this game or this is the biggest game of the season because it’s the opener,” he said. “We just have to prepare right, come out, start fast, and if we can get a win I think it would be great for the program and I think it will set us in the right direction.”

The Beavers hope to get a lift from the crowd as it will be the first game since school started and the addition of the student section could bring a little more energy.

"Corvallis is a great atmosphere,” Stanford coach David Shaw said. “It is a tough place to play. It’s loud and they will be fired up. It's about going there, executing and not letting your surroundings affect how you play."

Stanford comes to town having lost three straight and is already 0-2 in conference play with losses to USC and Oregon.

The defense at times this season has been suspect. The Cardinal gave up 45 points in back-to-back losses to USC and Central Florida but allowed just 21 to Oregon last week.

“The guys played hard, played physical and stepped up to the challenge,” Shaw said. “We harassed the quarterback throughout the day, an outstanding quarterback and one of the best in America.”

The Beavers expect to have running back Jermar Jefferson and receiver Tyjon Lindsey back for the game after both missed the Cal Poly game and had the bye week to heal up.

The Beavers have been balanced, rushing for 229.3 yards per game while passing for 247. That has translated to 36.3 points per game.

“Great offense, really good running backs, great receivers, I mean like any Pac-12 offense they can put up a lot of points,” Toohill said. “Maybe just like us I don’t know if their record reflects how good of a football team they are. I think they are really strong and playing there is really difficult. Corvallis is a tough place to play.”

Defensively, the Beavers will face Stanford (1-3, 0-2) team that has yet to establish a lot of offense and will be playing without starting quarterback K.J. Costello, who injured his thumb last week.

Davis Mills will get the start in Costello's place. Mills has completed 32 of 55 passes this season — he stared against USC — for 352 yards and one touchdown with one interception.

The Cardinal managed just six points last week and had just 234 total yards against the Ducks.

“Obviously they’ve had a little bit of a struggle compared to where they were at last year when we played them in Week 10,” Oregon State defensive coordinator Tim Tibesar said. “They were moving the ball a little bit better, scoring more points and they’ve been trying to find a little bit of their identity this year.”

Despite a run game that is only averaging 115 yards per game, the Beavers are preparing to face a steady dose of Cameron Scarlett (70 carries, 321 yards) and others.

“We’ve certainly got to be prepared for that,” Tibesar said. “They’ve always been a run-first team whenever they’ve been able to run it and they came out against Oregon early on and really tried to commit to the run and I would expect them to do the same against us.”

To help combat that, the Beavers hope to have Jordan Whittley back on the line after missing the Cal Poly game.

“He’s a great addition to us as far as being a run stuffer, he’s hard to block and active inside,” Tibesar said. “He’s a big guy in the middle who makes us better when he’s on the field.”

To come away with a win, the Beavers know they need to play solid in all aspects of the game.

“I think the biggest things is that they are a disciplined team,” Flemings said. “They don’t make a lot of mistakes so what they give you, you have to capitalize on. You can’t make mistakes and expect to beat that team. And you also have to come in here and match their physicality.”

You could call Oregon State’s game against Stanford this Saturday a must-win for either team.

OSU football: Beavers could find success through the air against Stanford

Since taking a 17-3 lead at USC early in the second quarter three games ago, not much has gone right for the Stanford football team.

OSU football: Defense has some confidence after three games

There’s no doubt there has been some improvement made by the Oregon State football team's defense from a season ago.

Oregon State hopes to have a healthy Jermar Jefferson for Saturday's Pac-12 opener against Stanford.

Stanford running back Cameron Scarlett, left, is averaging just over 80 yards rushing per game this season.

Stanford quarterback Davis Mills will get the start for the Cardinal on Saturday at Oregon State. He has completed 32 of 55 passes for 352 yards this season.