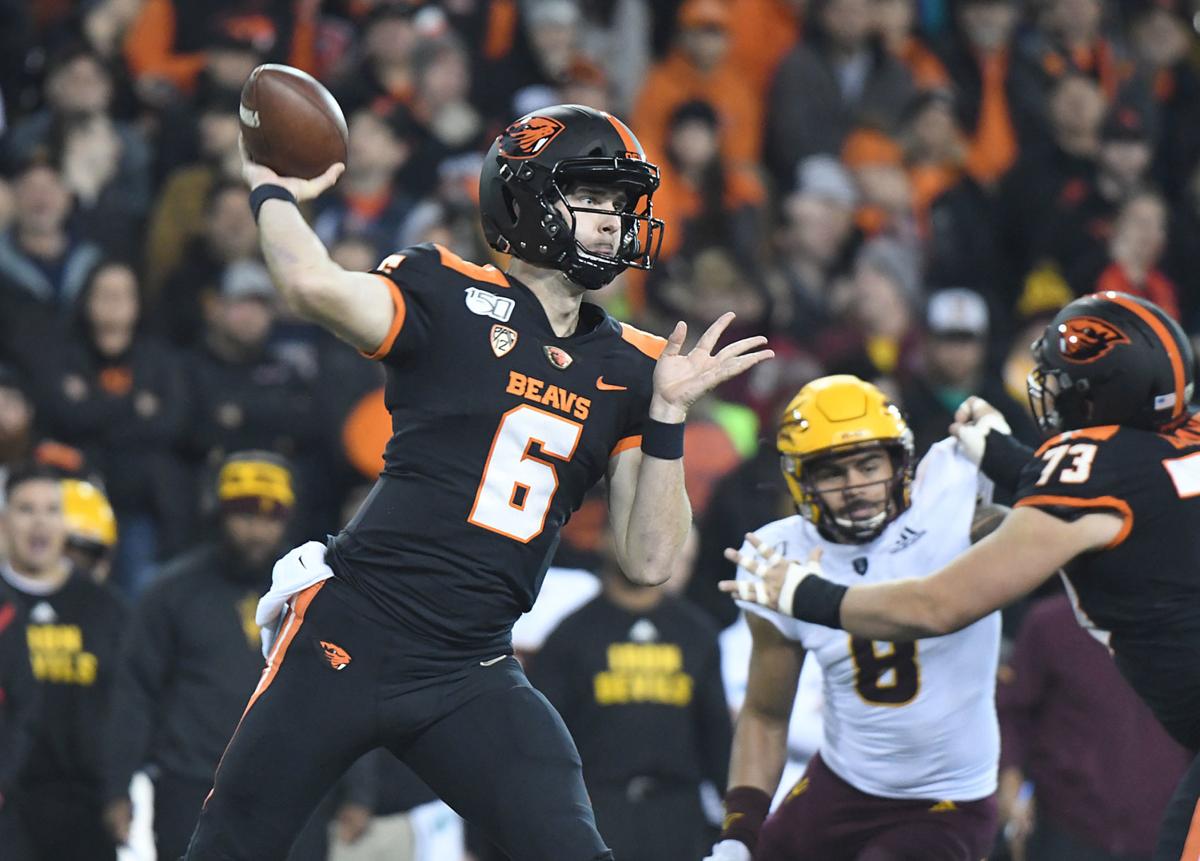 Oregon State quarterback Jake Luton has helped guide the Beavers' offense to 414.6 yards and 33.1 points per game this season. 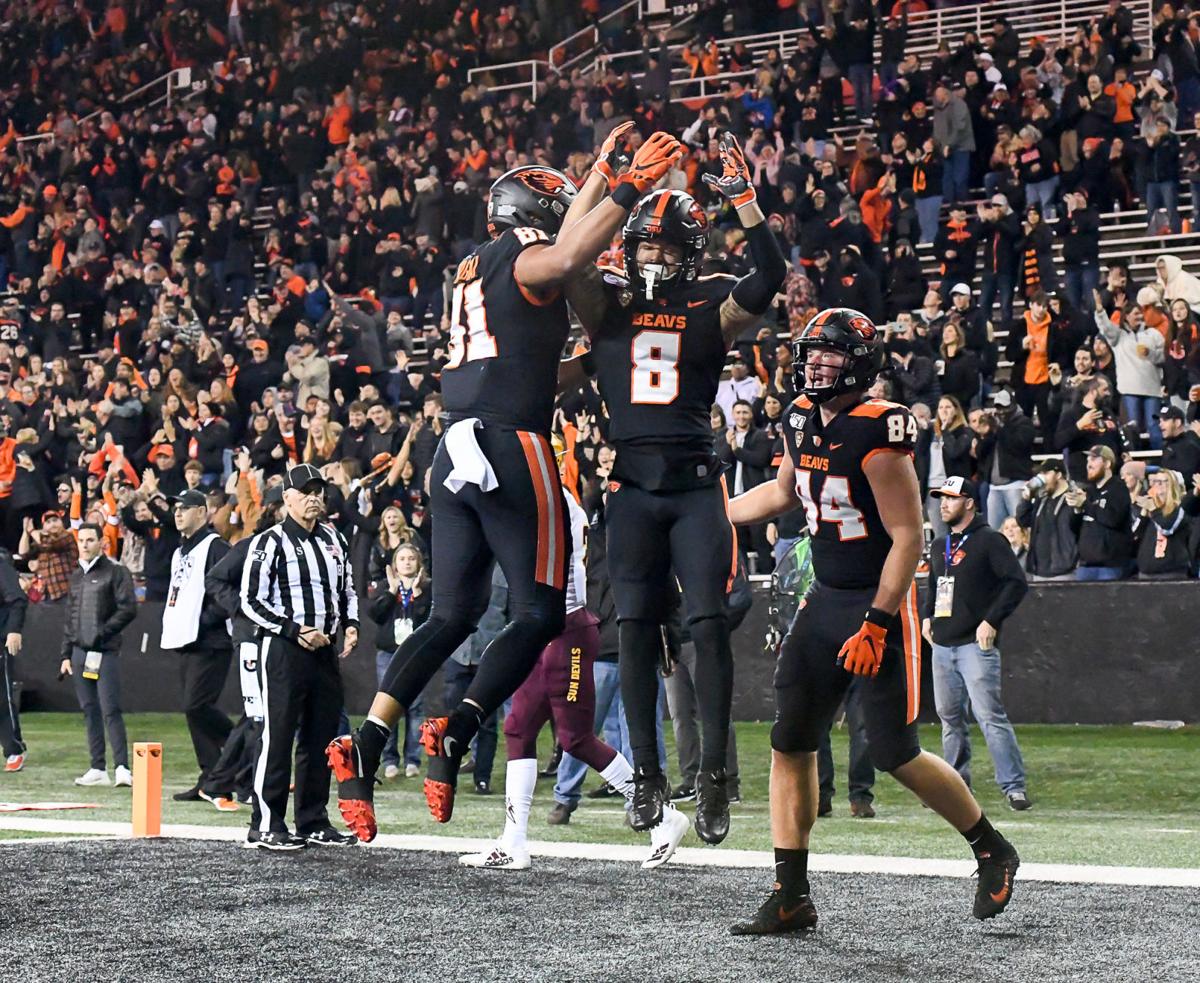 Noah Togia, left, celebrates with Trevon Bradford, center, in a win over Arizona State. The Beavers need a win in the Civil War to go bowling. 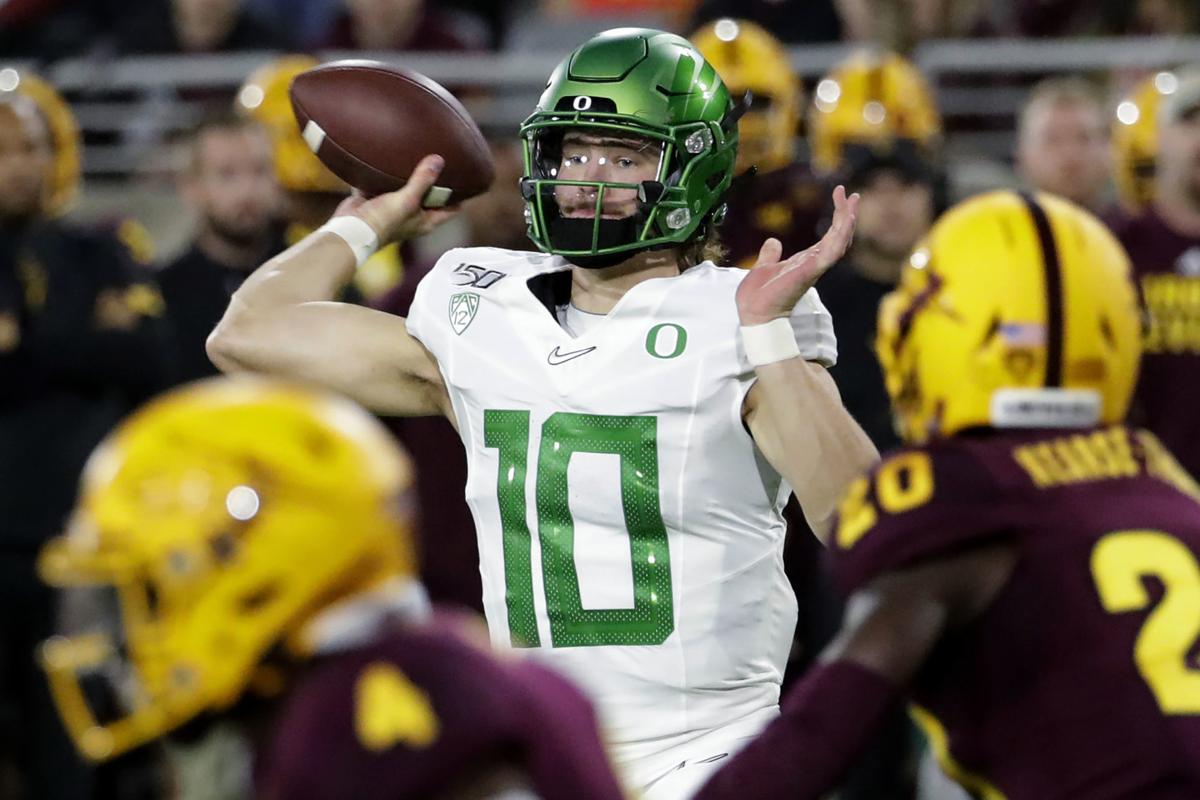 Oregon quarterback Justin Herbert tossed two interceptions in a loss at Arizona State but will look to bounce back and close his career in Autzen Stadium with a win over the Beavers.

There have been times this season with the Oregon State offense has looked nearly unstoppable.

The Beavers, who average 414.6 yards per game, have scored at least 35 points in six games, topped 40 four times and 50 twice. They have also scored 28 in two other games.

But against three of the top four defenses in the conference, the offense has scored 21 (Cal, fourth), zero (Washington, second) and seven (Utah, first) points while going 1-2.

“I think it’s a huge challenge,” OSU offensive coordinator Brian Lindgren said. “I see them as one of the top defenses in the conference, if not the country. Lot of veteran players that have played a lot of football.

“Physical, really sound, get after and rush the passer well. Play the run well. It will be a tough challenge for our offense. And then to go play in a tough environment on the road in a rivalry game. Tough challenge for us but I think our guys are excited for it.”

The Beavers hope they can take some of the lessons learned against the likes of Utah and Washington and have better success against the Ducks, who have allowed 30 or more points in three of their last five games.

“It will be a tough deal for us and I think we learned some things from those games and some calls that we need to get to and work those this week,” Lindgren said.

In the same regard, the Ducks can look at how the Utes and Huskies slowed down the Beavers’ high-powered offense that is still averaging 33.1 points per game even with those two clunker thrown in.

“I think anytime you watch somebody else play an opponent you’re about to play and they have success you have to take it with in how does it fit into what you do and is it really scheme related, is it personnel-related, did the other team just have an off day or whatnot,” Oregon coach Mario Cristobal said. “It’s a little bit of everything. So yeah, there’s some stuff to take out of it and some other stuff where you just don’t have much use for it.”

Cristobal said the Beavers may have been their worst enemy in those games.

“When I look at them offensively I look at them as a team that when they have been stopped they kind of stop themselves,” he said. “They haven’t just been shut down. And maybe there was a breakdown in protection here or there that prevented a big play down the field or a missed block that prevented a run from splitting a defense in that particular game.

“I don’t see them as the type of operation where somebody’s come in and — I know Utah had a real good game against them — but overall I think that’s an offense that has had great success against everybody and the self-inflicted wounds has hurt it more than it’s been stopped.”

The Beavers (5-6, 4-4) are looking to win the Civil War for the second time in four years, and, more importantly, reach the six-win plateau and earn a bowl berth as well as a winning conference record for the first time since 2012.

“There’s a lot on the line and not only that but it’s Civil War week,” OSU quarterback Jake Luton said. “You always want to play your best. My last regular-season game at Oregon State, we’re going to bring everything we’ve got and put on a good performance and hopefully play well enough to put on an Oregon State uniform one more time.”

The Ducks (9-2, 7-1) don’t have anything near as much to play for as they saw their College Football Playoff dreams dashed with a loss to Arizona State last weekend. Oregon fell from No. 6 to No. 14 in the CFP rankings on Tuesday.

Still, the Ducks want to win to not only extend their recent domination of the Beavers — they have won 10 of 11 in the series and OSU hasn’t win in Eugene since 2007 — but enter the Pac-12 title game with some momentum.

Cristobal knows that even though the Ducks are favored by three touchdowns, they can't expect an easy go of it on Saturday.

"I think our players and our coaches fully understand that this is one of those games that’s a tremendous challenge and it’s going to be a tremendous atmosphere and we’re looking forward to Saturday,” he said.

While Luton said the team hasn’t outwardly spoken about how meaningful Saturday’s game is, they all know what’s at stake.

“If we don’t play to our best ability then it’s our last time together as this team and we definitely don’t want that,” he said. “We want to strap it up one more time and play another game after this week. Hopefully that’s what we’ll do.”

OSU football: Defensive has made big strides in Year 2 under Tibesar

The numbers may not jump off the page and scream a successful season. But the Oregon State defense has made significant strides in the second …

OSU football: Should Beavers have been more aggressive before fourth-down play?

PULLMAN, Wash. — Washington State running back Max Borghi guaranteed the Cougars were going to go bowling and said they were going to beat Ore…

Oregon State quarterback Jake Luton has helped guide the Beavers' offense to 414.6 yards and 33.1 points per game this season.

Noah Togia, left, celebrates with Trevon Bradford, center, in a win over Arizona State. The Beavers need a win in the Civil War to go bowling.

Oregon quarterback Justin Herbert tossed two interceptions in a loss at Arizona State but will look to bounce back and close his career in Autzen Stadium with a win over the Beavers.