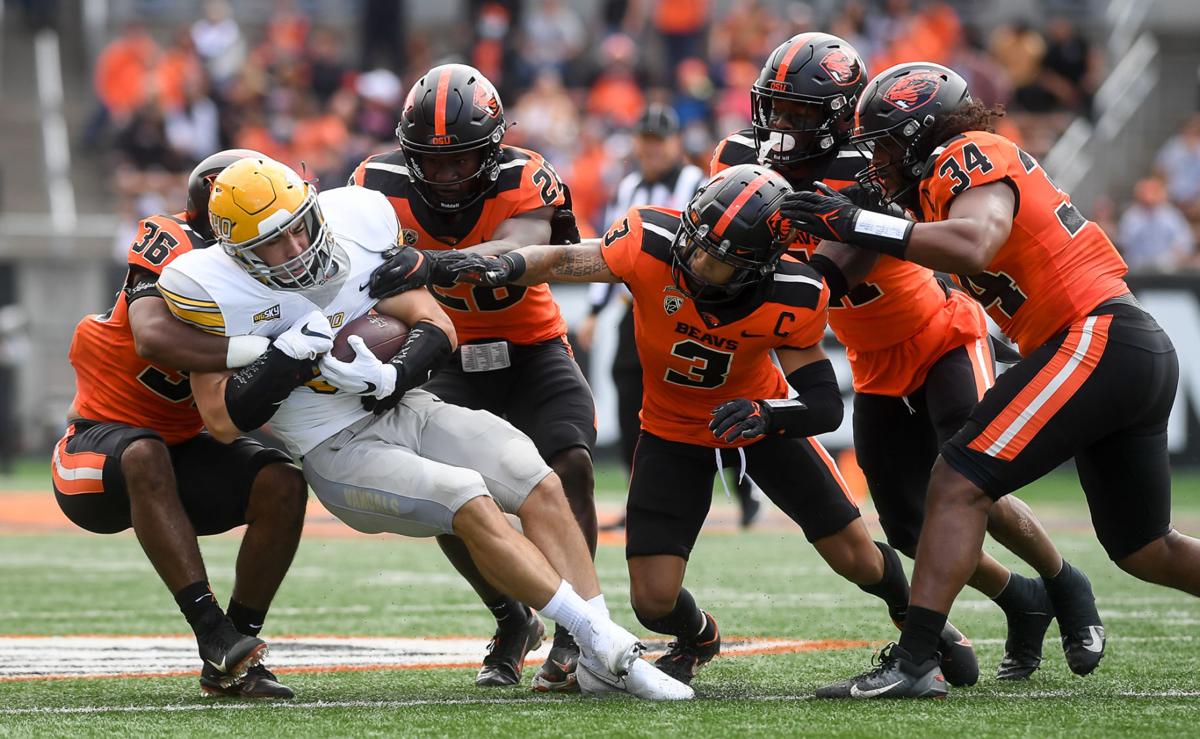 The Oregon State defense, including linebacker Omar Speights (36), converges on Idaho running back Nick Romano. The Beavers got the shutout, 42-0, in their final warmup before Pac-12 play. 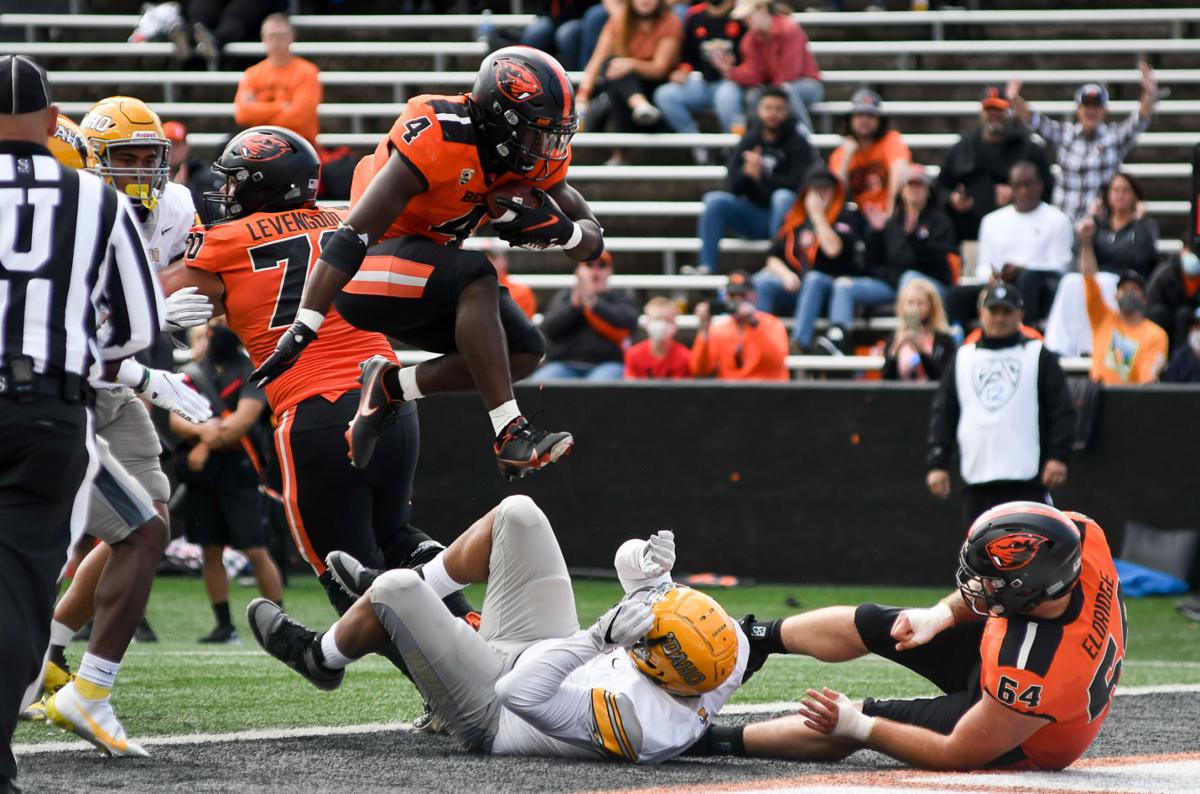 OSU running back B.J. Baylor jumps into the end zone. He scored twice Saturday and has seven touchdowns in the first three games. 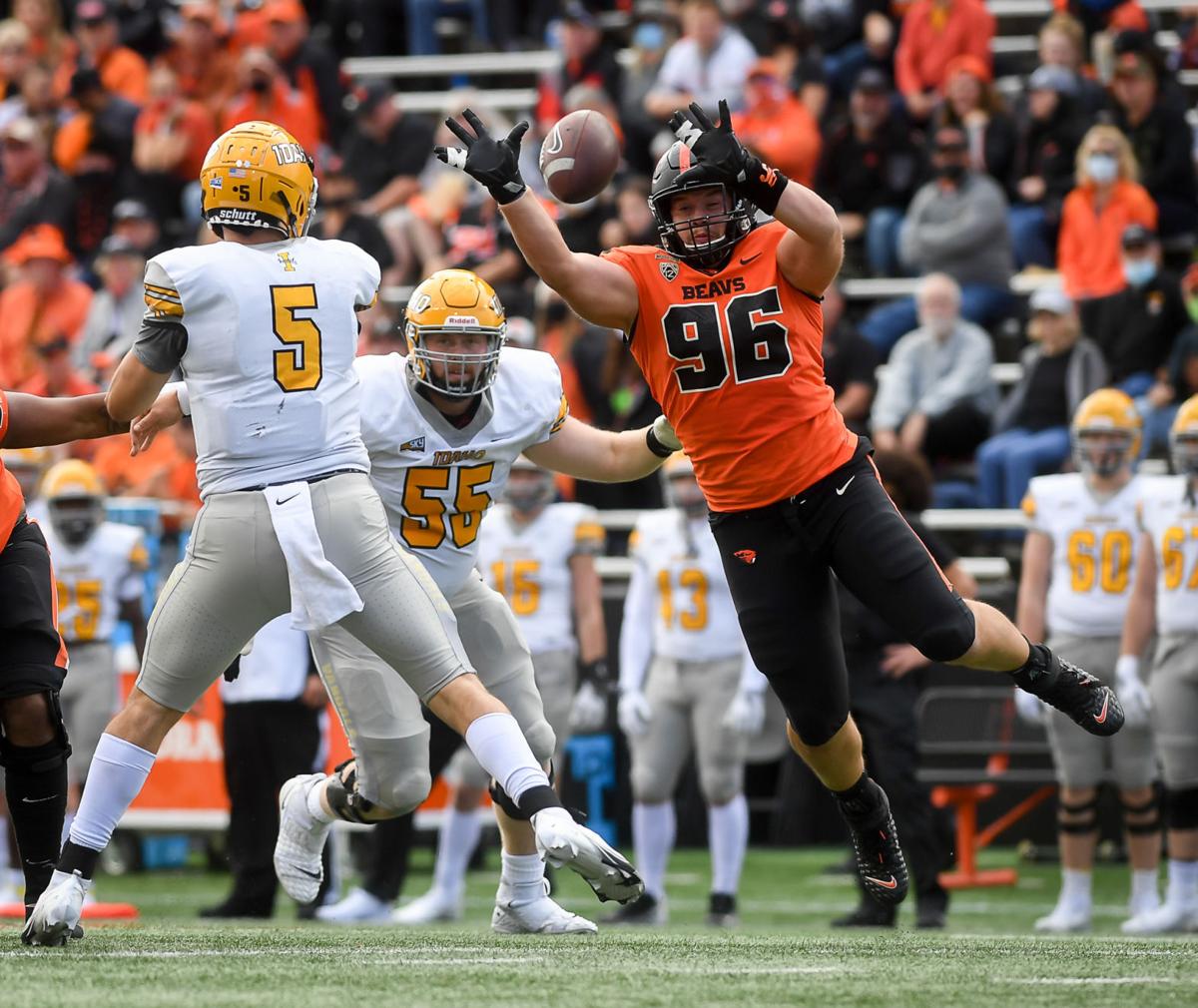 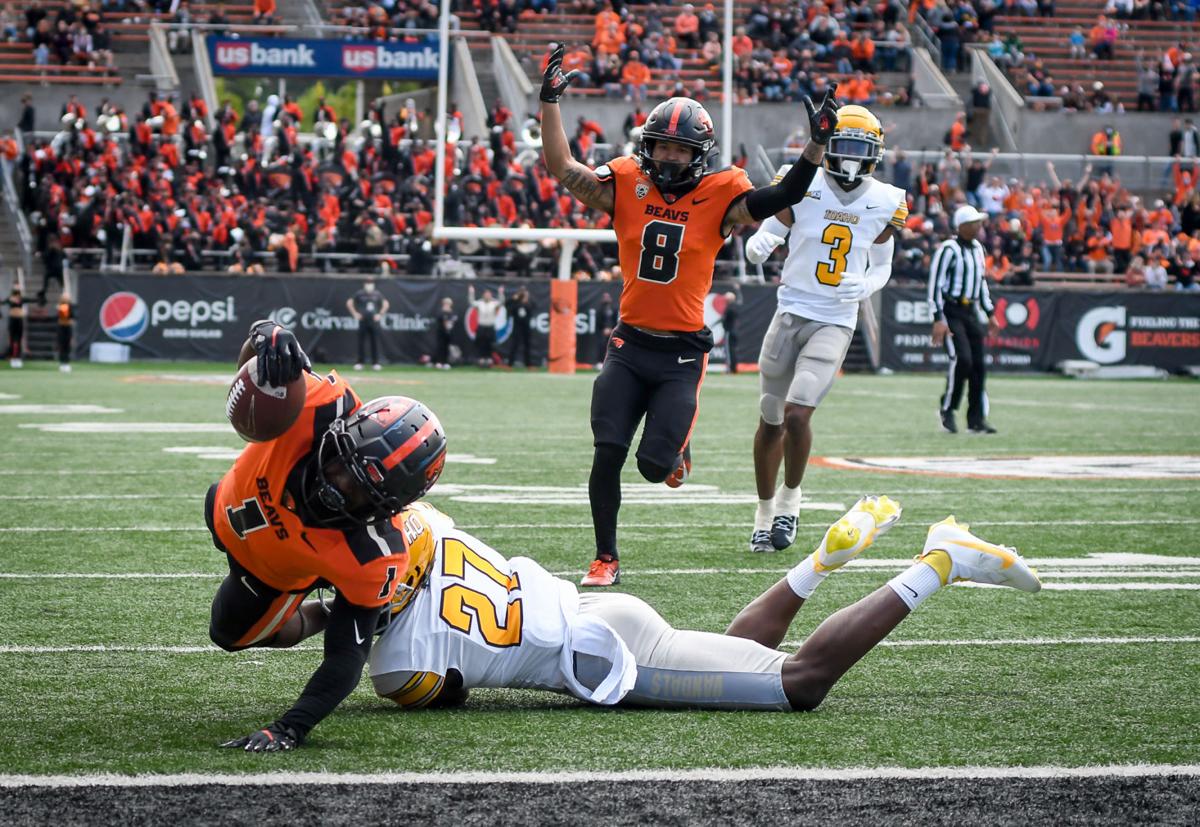 The Beavers' Tyjon Lindsey dives for the end zone for the first score of the game. Oregon State defeated Idaho 42-0 on Saturday at Reser Stadium.

Oregon State didn’t give Idaho much chance to think about hanging around Saturday afternoon.

The FBS big brother Beavers scored early and often, shut down the FCS Vandals with a bend-but-don’t-break style when they tried to extend drives and went deep in their bench in their final tune-up for the Pac-12 football opener at USC next weekend.

OSU jumped ahead 21-0 for the second straight week on its way to a 42-0 nonconference win at Reser Stadium.

Ready or not, conference play is here.

“We’re going to play some explosive offenses in this league,” Beavers coach Jonathan Smith said, whose team got the program’s first shutout since a 3-0 win against Pittsburgh in the 2008 Sun Bowl. “If we keep working we can build some depth, which we’ve done over the last three games.”

With the game well in control, Oregon State (2-1) was able to get some fresh faces on the field.

The Beavers played three quarterbacks and had six different running backs carry the ball while 13 different wide receivers or tight ends were targeted in the pass game. Twenty-one OSU defenders recorded at least one tackle.

“It’s cool to see a lot of the guys you see in practice make plays, cool seeing them on the field doing it against another team. It’s exciting for those guys,” said OSU starting linebacker and Crescent Valley High graduate Omar Speights, who had six tackles and an interception.

Idaho’s best scoring chance came late in the third quarter after a Sam Noyer interception gave the Vandals the ball at the Oregon State 33. The visitors ran four plays inside the Beaver 10, and got as far as the 3, but they couldn’t get in the end zone.

OSU defensive back Skyler Thomas had a fourth-quarter interception that snuffed out an Idaho drive near midfield.

“They kept on swinging. They were physical,” Smith said of the defense, noting that it wasn’t an easy offense to defend with Idaho (1-2) rotating quarterbacks with different skill sets. “I thought we covered well and tackled well. Played better on third down, which was a huge help.”

Oregon State dominated the first half, scoring on all four of its possessions in the first two quarters to lead 28-0 at the break.

After the first of Idaho’s three turnovers on downs in OSU territory before halftime, a B.J. Baylor 10-yard run and 25 more on the ground from Trey Lowe helped set up Tyjon Lindsey’s 18-yard touchdown reception from Chance Nolan on the Beavers’ first drive of the game.

Oregon State showed its big-play ability on its next drive, with three plays of 13 yards or more, including a Nolan 25-yard scamper, before Nolan found the end zone on a 4-yard run.

Later taking the ball at its own 42 after a turnover on downs, OSU got an 18-yard run from Deshaun Fenwick, a 17-yard catch by Trevon Bradford and two straight 9-yard Fenwick runs to make it 21-0. It was the first touchdown for Fenwick, a first-year transfer from South Carolina.

Idaho then produced one of its best possessions of the half, moving from its own 20 to the Beaver 28 behind reserve quarterback CJ Jordan. But the drive would stall, and Oregon State took the ball at its own 33 after a failed fourth-down play.

OSU redshirt freshman Makiya Tongue got his collegiate catch on the next drive, covering 24 yards. Sam Noyer, the Beavers’ starting quarterback in the season opener who didn’t play in the second week against Hawaii, came in and converted a third down with a 2-yard run.

Luke Musgrave had a 20-yard reception to the Idaho 4, and two plays later Nolan connected with Teagan Quitoriano for a 2-yard touchdown with 1:16 left in the half.

Saturday, they had four receptions for 43 yards in the first half alone and finished with six catches for 54 yards.

Musgrave said there could be many different variables as to why he wasn’t more involved in the passing offense in the first two games, from defensive pressure to route schemes.

“I just run routes and if the ball is there I’ll try to catch it,” said Musgrave, who had three catches for 40 yards. “The most important part is helping the team win.”

OSU’s first offensive play of the game, a tight end delay that resulted in an 8-yard catch for Quitoriano, was ran in tribute to Smith’s time with Dennis Erickson — and to Erickson’s father Robert “Pink” Erickson — at Idaho.

Smith was Idaho’s quarterbacks coach for six seasons (2004-09). Dennis Erickson was the Vandals’ head coach in 2006 and Oregon State’s head coach for three years during Smith’s time as a Beaver quarterback.

Noyer replaced Nolan for good in the third quarter. True freshman Sam Vidlak got his first chance behind center in a live game in the fourth.

Champ Flemings scored on a 30-yard touchdown pass from Nolan and Baylor got his second rushing touchdown, from 2 yards out. Both TDs came in the third quarter as the Beavers extended to a 42-0 advantage.

Baylor is the first Oregon State running back with multiple touchdowns in three consecutive games since Storm Woods accomplished that in 2012 against Oregon, Nicholls State and Texas. He now has seven touchdowns for the season.

“B.J. was solid again. I do like the idea that we can get multiple guys in the game,” Smith said, praising Fenwick and Lowe. “Moving forward you’re going to need more than one back and I think we’ve got more than one.”

Top 25: How ranked teams performed, B3

Brandon Kipper muffles the outside noise when it comes to his football team’s performance.

Oregon State coach Jonathan Smith was impressed by what he saw from Chance Nolan after watching film of Saturday’s 45-27 home win against Hawaii.

Avery Roberts and Omar Speights are relatively quiet leaders who let their play on the field do the talking.

If you’re an Oregon State wide receiver and you do something well, you’ll see the playing field.

The Oregon State defense, including linebacker Omar Speights (36), converges on Idaho running back Nick Romano. The Beavers got the shutout, 42-0, in their final warmup before Pac-12 play.

OSU running back B.J. Baylor jumps into the end zone. He scored twice Saturday and has seven touchdowns in the first three games.

The Beavers' Tyjon Lindsey dives for the end zone for the first score of the game. Oregon State defeated Idaho 42-0 on Saturday at Reser Stadium.