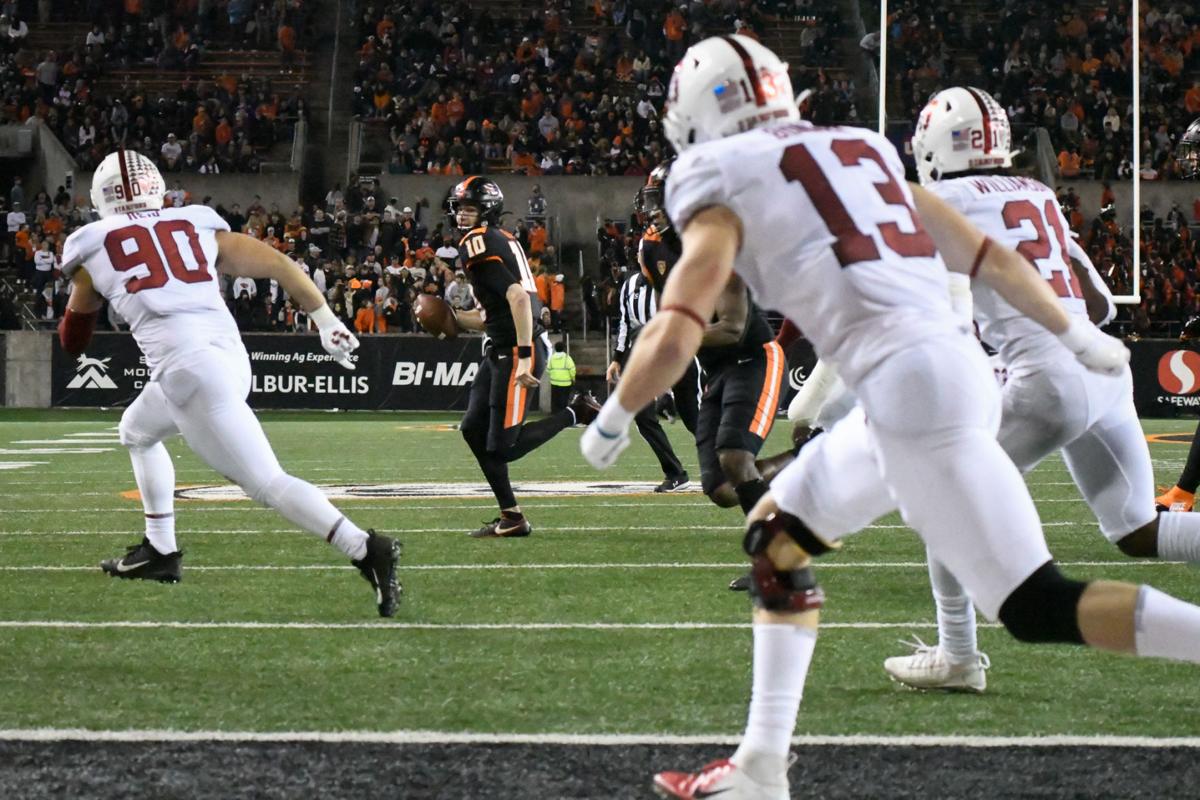 Oregon State quarterback Chance Nolan (10) rolls out while looking for an open receiver in the fourth quarter. Nolan had one rushing and two passing touchdowns in the Beavers' 35-14 victory over Stanford on Saturday. 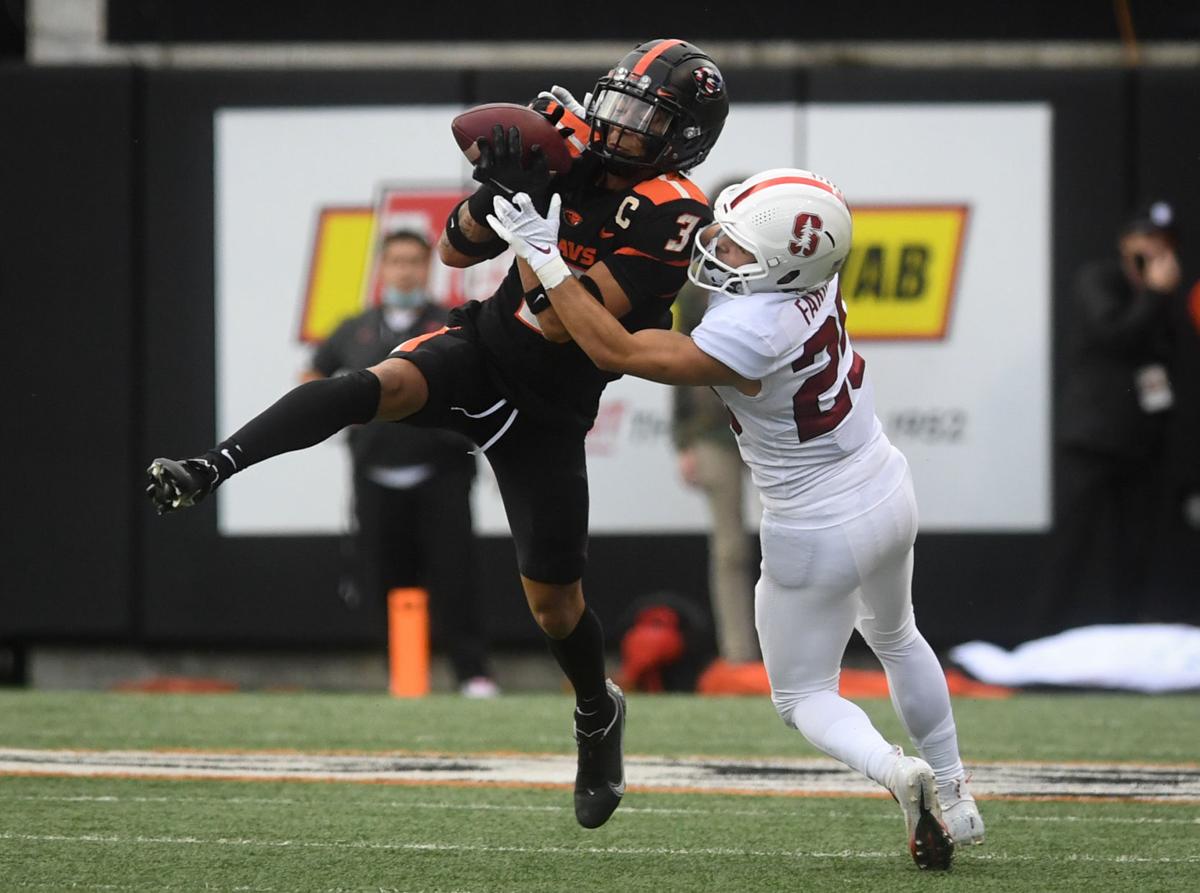 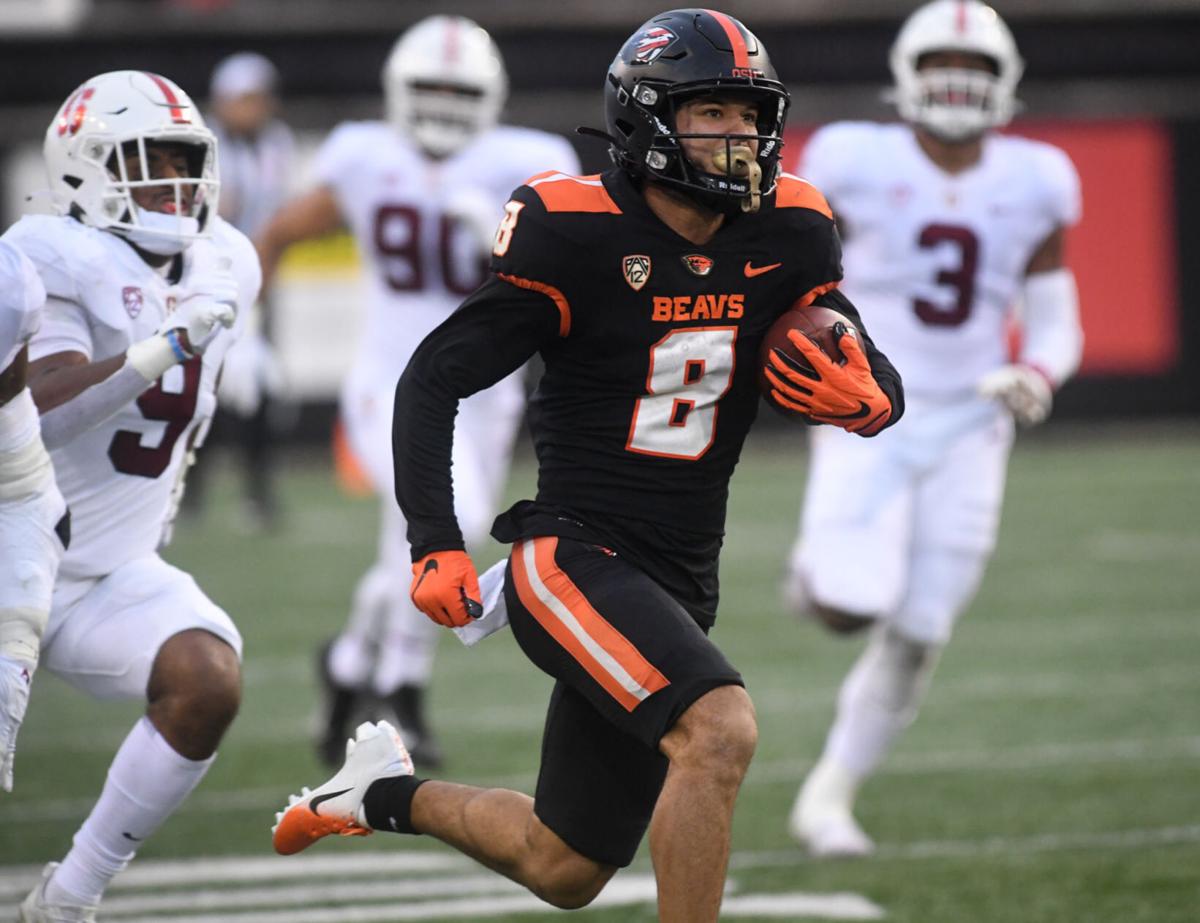 Oregon State wide receiver Trevon Bradford (8) is chased by a pack of Stanford defenders on this 67-yard touchdown reception in the third quarter. Oregon State defeated Stanford 35-14 on Saturday to become bowl-eligible for the first time since 2013. 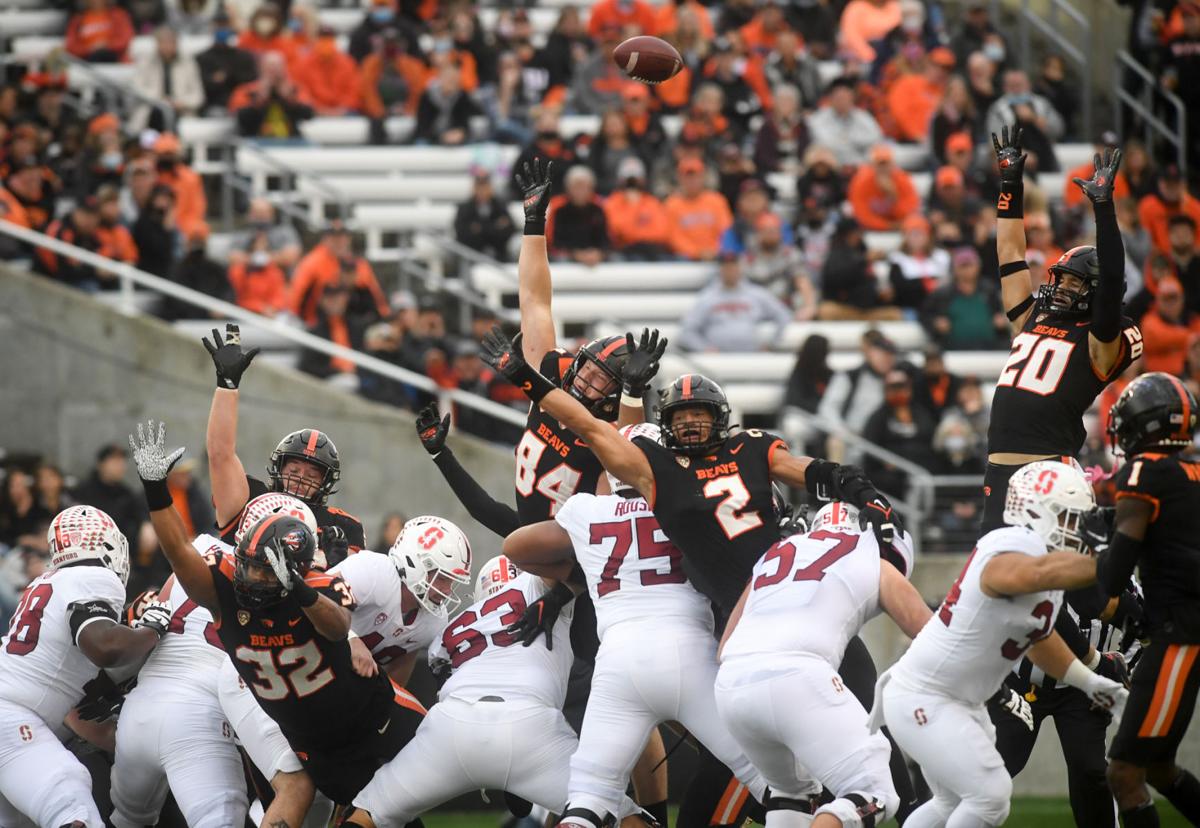 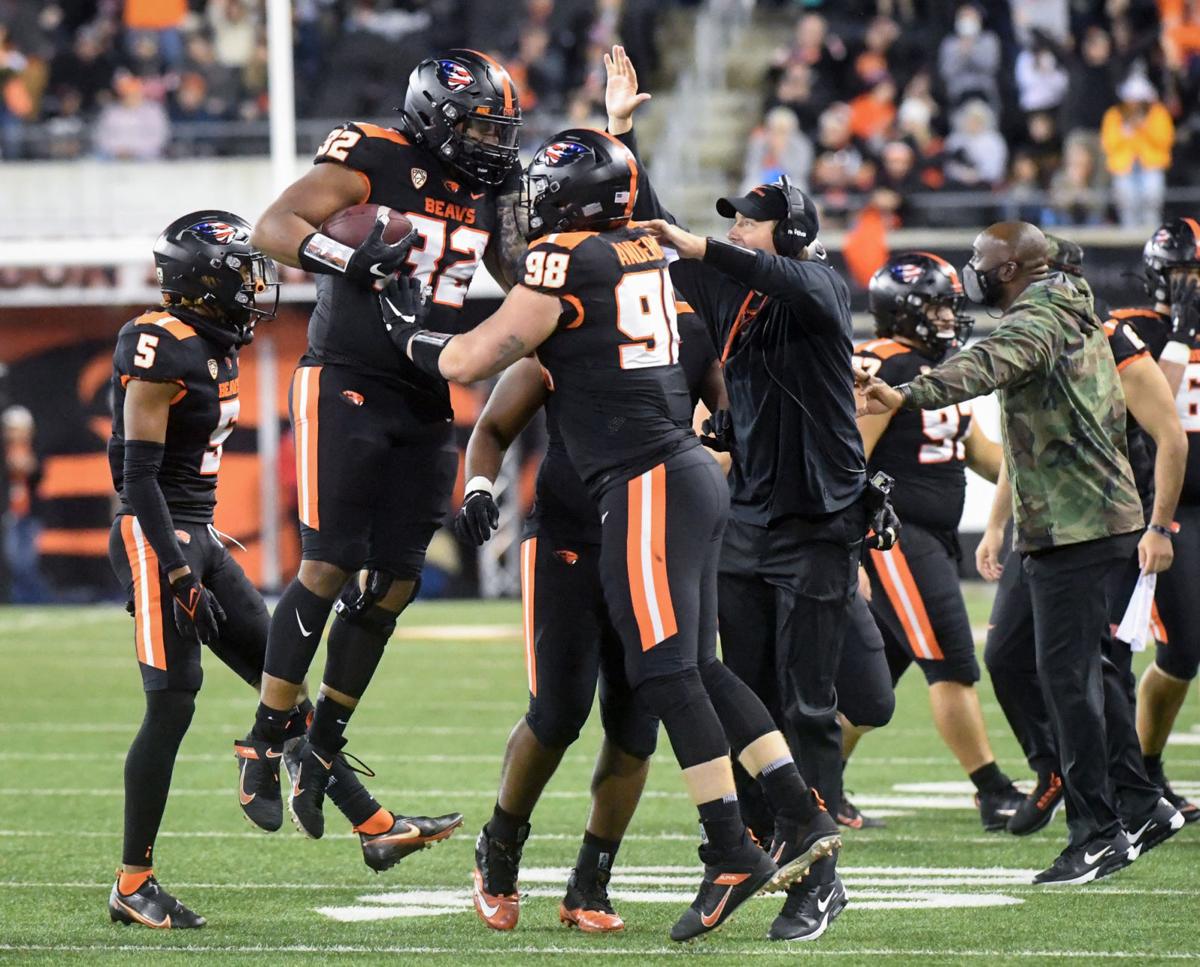 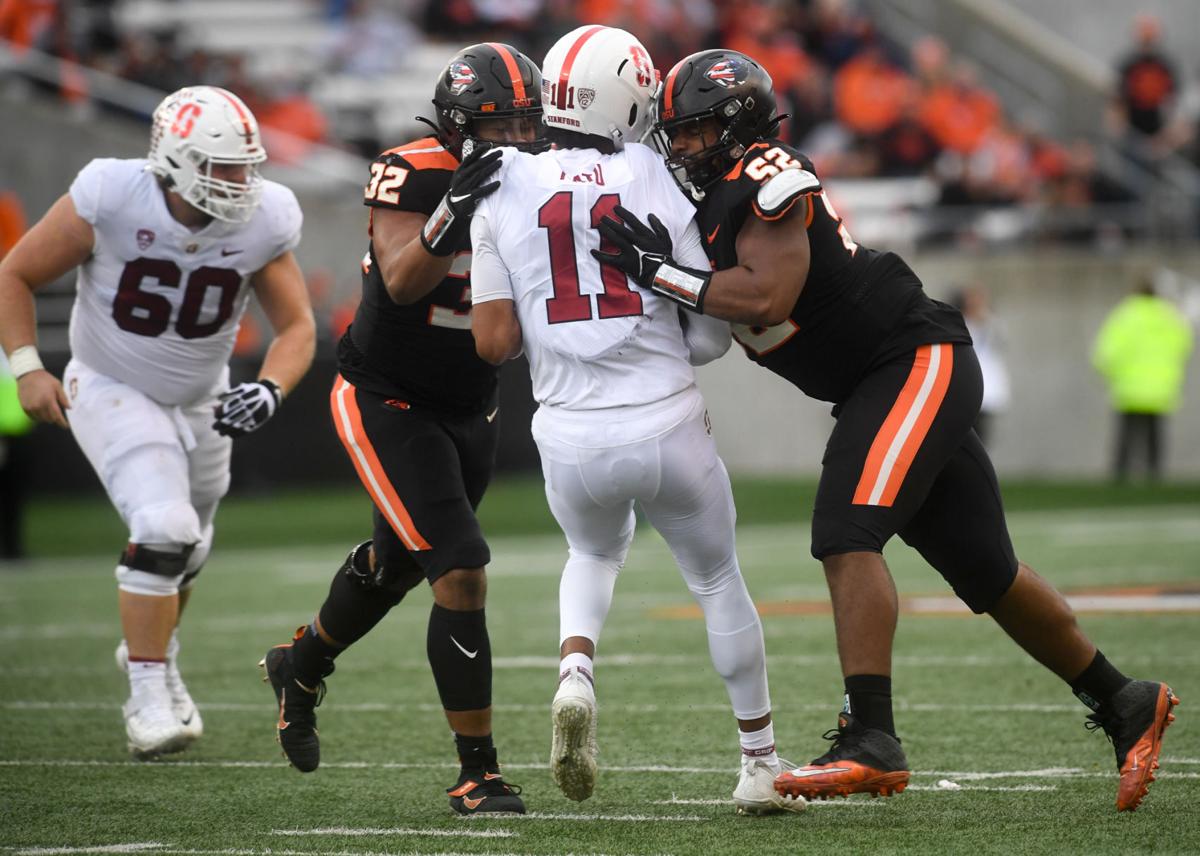 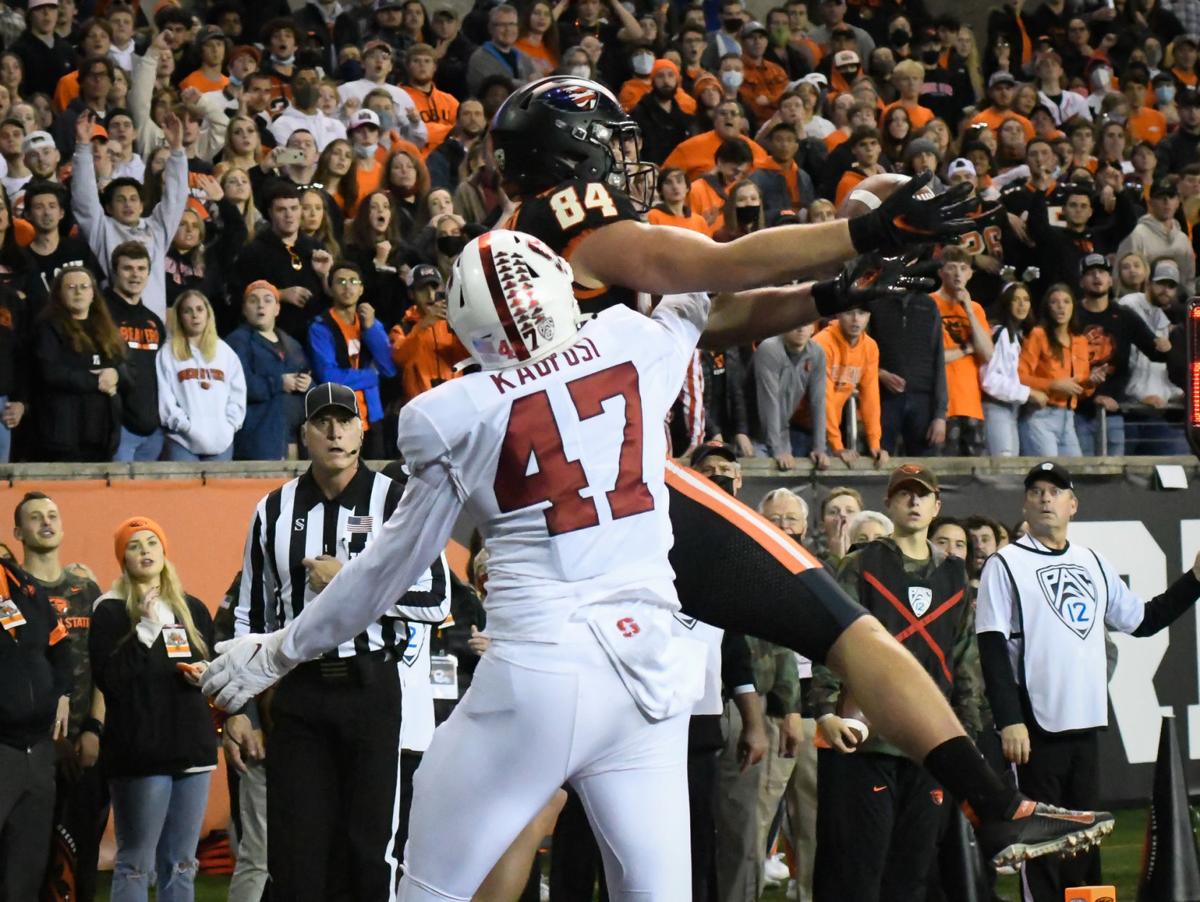 As Smith was making his way back to toward the locker room, players and fans were celebrating on the field as the victory over the Cardinal made the Beavers bowl eligible for the first time since the 2013 season.

Suddenly Smith was doused with some water.

It was a feel-good night for just about everyone inside Reser Stadium on Saturday, except for the contingent from Stanford, that is.

After two failed attempts in road losses to California and Colorado the past two weekends, the Beavers (6-4, 4-3) finally got over the hump and have qualified for the postseason in Smith’s fourth season leading the program.

“There's no question this is big, the number six is big,” Smith said. “I’m not going to dance around that. Now we have a couple more games that mean a whole lot. But it should, it’s something to celebrate. The guys do, Beaver Nation does. We get to continue to really keep the group together for a longer period of time. Another opportunity in postseason is big-time stuff.”

It was a bit of a tumultuous week for the Beavers, who were unable to get to the magical six wins the past two weekends. Smith then fired defensive coordinator Tim Tibesar last Sunday.

But the Beavers put together a solid performance on both sides of the ball as they rushed for 218 yards and passed for 257 in racking up 475 total yards.

Defensively, the Beavers limited an undermanned Stanford team to just 230 total yards, the fewest in a conference game with Smith as the head coach. The previous low was 282 against Cal in 2019.

"I think it's just joy,” tight end Teagan Quitoriano said. “We worked really hard, especially these last few weeks when we're just on the cusp, and it feels good to get it done and go bowling.

“It means a lot. It means a lot for everyone, especially people like Andrzej (Hughes-Murray) and Trevon Bradford. They've been here for longer than I have. And to finally get to go bowling and have a successful season, it’s nice.”

B.J. Baylor carried 23 times for 80 yards scored once. He surpassed the 1,000-yard mark late in the first half, becoming the ninth OSU player to accomplish that feat at least once.

Chance Nolan was 19-for-25 passing for 226 yards and two scores as the Beavers had more passing yards than the Cardinal had total yards. Nolan also added a rushing touchdown.

Stanford finished with 136 yards rushing on 27 attempts and three quarterbacks combined to complete 10 of 22 passes for 94 yards with a touchdown and two interceptions.

Oregon State took control of the game with back-to-back touchdown drives at the end of the first half and the start of the second.

Short-yardage weapon Jack Colletto punched it in from 2 yards out with 17 seconds left in the first half, then Bradford caught a short pass, made a Stanford defender miss and went the final 60 yards of a 67-yard play to put the Beavers up 21-0 1:36 into the third.

Bradford’s reception was the longest of his career, surpassing the 63-yarder he had against Stanford in 2018.

“I think at the end of the half was really important because we were kind of stuttering there,” Quitoriano said. “So it was nice to get it in for that score right at the end. And then you always want to come out in the beginning of the half and just start fast and put it in like we did. I think those were big momentum builders for us, both of those drives.”

Stanford finally got something going on offense as the Cardinal scored from eight yards out on a pass from Ari Patu to Benjamin Yurosek on fourth-and-2 with 10:24 left in the third to make it 21-7.

The Beavers failed on a fourth-down play at their own 34, but Rejzohn Wright came up with an interception to thwart the Cardinal. OSU then went on a 12-play, 80-yard drive capped off by Baylor’s 6-yard run to make it 28-7.

Quitoriano’s leaping catch in the end zone made it 35-7 early in the fourth and the players and fans could taste a bowl berth.

Oregon State’s defense suffocated an under-manned Stanford team that was starting Patu, a freshman, at quarterback. The Beavers held the Cardinal to 75 total yards in the first half, allowing only 27 passing yards.

The Beavers piled up 237 yards of total offense in the half, using a balanced attack that saw them rush for 121 yards and pass for 116.

The Beavers took a 7-0 lead thanks to a 16-play drive that covered 75 yards. Nolan capped the drive with a 4-yard keeper with 6:30 left in the first.

Both teams failed to convert on long field goal attempts as Everett Hayes missed a 56-yards for the Beavers and OSU blocked a 55-yard attempt by the Cardinal.

While the Beavers are bow eligible, they are not satisfied.

That was Smith’s message in the locker room.

“He just told us a good game and he was just telling us that we ain't finished it,” Baylor said. “We still got two more games ago. So we just got to come out and keep playing.”

OSU hosts Arizona State next Saturday in a 7:30 p.m. game on ESPN. The Beavers visit Oregon on Nov. 27 at a time and on a TV network to be determined.

Online: See this story at the website for a photo gallery from the OSU-Stanford game

Of note: The Beavers are 5-0 at home this

OSU football: Defense got the job done versus Stanford

Oregon State wasn’t facing one of the most imposing offenses that Pac-12 football has to offer last Saturday, but the Beavers accomplished a g…

Oregon State quarterback Chance Nolan (10) rolls out while looking for an open receiver in the fourth quarter. Nolan had one rushing and two passing touchdowns in the Beavers' 35-14 victory over Stanford on Saturday.

Oregon State wide receiver Trevon Bradford (8) is chased by a pack of Stanford defenders on this 67-yard touchdown reception in the third quarter. Oregon State defeated Stanford 35-14 on Saturday to become bowl-eligible for the first time since 2013.