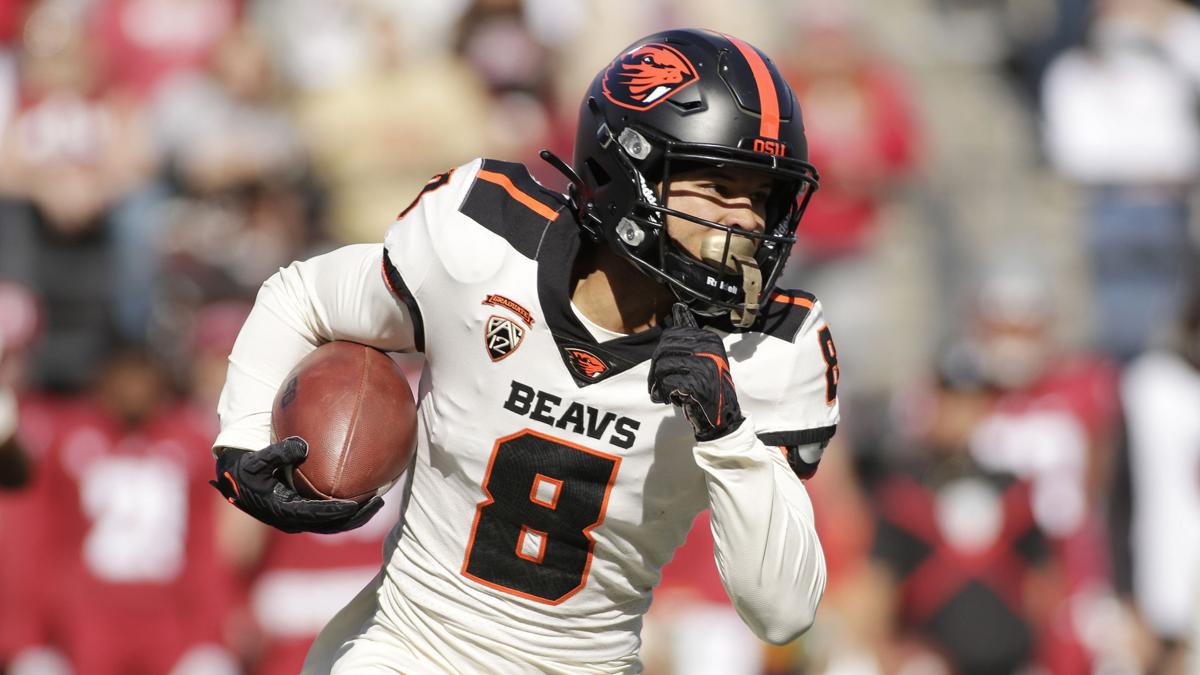 After what coach Jonathan Smith called a productive bye week, Trevon Bradford (8) and Oregon State get back to their schedule Saturday by hosting Utah. 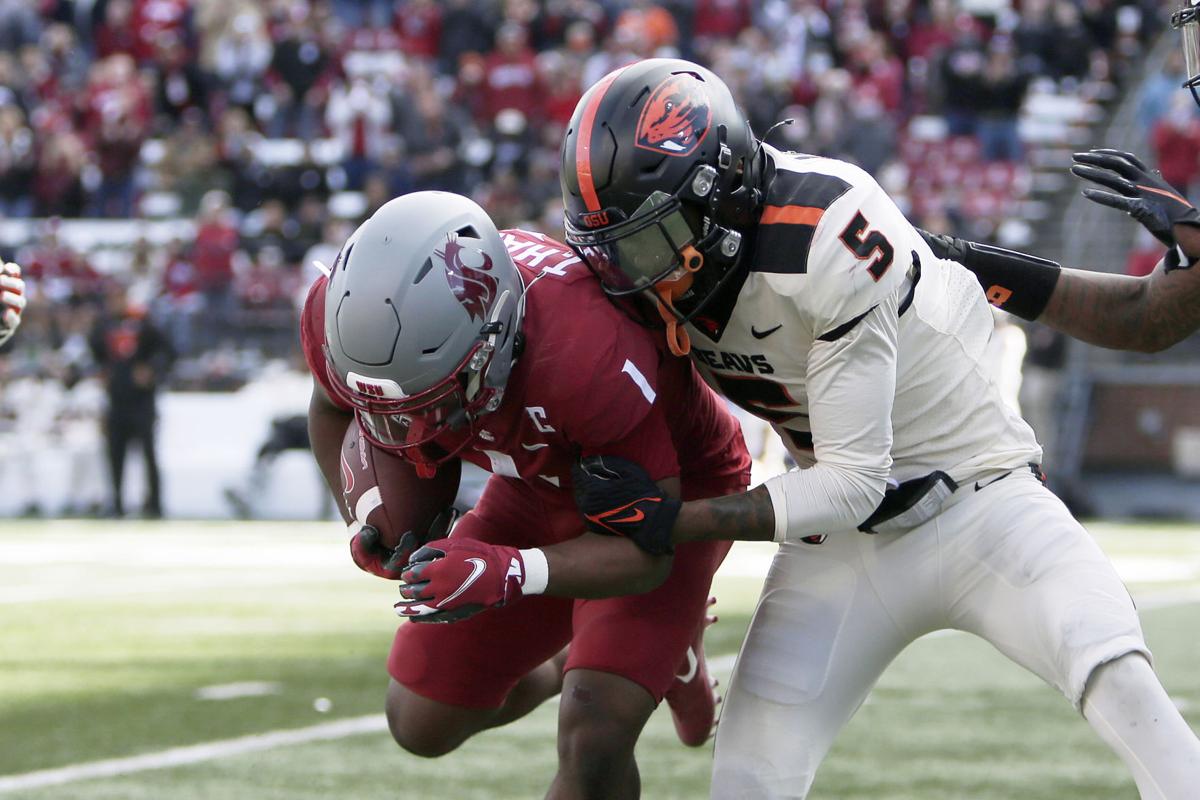 Oregon State defensive back Alex Austin (5) tackles Washington State wide receiver Travell Harris in the Oct. 9 game in Pullman, Washington. The Beavers will try to improve on their conference-worst defensive third-down conversion percentage as they come off a bye to host Utah on Saturday.

The Oregon State football coach had his team practice Tuesday and Wednesday before the coaches headed out on recruiting trips.

“Hadn’t been on the road for quite a while, seeing players play or practice, getting around the coaches again. So really enjoyed that,” Smith said. “I feel like it was productive. With bye weeks you never totally know. You’re in a little bit of rhythm of the season and speed of play, and really a challenge to our guys to use this week to get back to the speed of play.”

The Beavers (4-2, 2-1 Pac-12) returned to practice Sunday as the attention turned to this Saturday’s home game against Utah (4-2, 3-0), a squad that claimed its third straight victory last Saturday in a 35-21 home win against Arizona State after trailing 21-7 at halftime.

Smith told the media that he finds value in having a bye week in the middle of the 12-game regular season, as OSU did this year.

“I do like the idea of maybe in the middle,” he said. “But it’s almost like you want to pick your bye once you get into the season. If you’re playing pretty well you want to keep playing. Coming in the middle of it I think is a positive. I prefer that to after maybe game 10 or something.”

In 2018, Smith’s first season as the Beavers’ head coach, Oregon State also had a bye after six games. The Beavers had two byes in 2019, after the third and seventh games of the season. OSU had no byes in an abbreviated seven-game 2020 season.

Oregon State has a bowl berth well within reach with six games left in the regular season, needing two more wins to become eligible. The Beavers last played in a postseason bowl after the 2013 season, when they defeated Boise State in the Hawaii Bowl.

Smith points to the way his team works as a reason OSU can be better in the second half of the season.

“We’re going to need to improve and play better because our opponents are doing the same thing,” the coach said. “Each game is new, but we’ve got to improve in all three phases. You look around this league, and every game is going to come down to the fourth quarter. We’ve got to be playing our best at the end of games.”

One area Smith addressed Monday was third-down defense. The Beavers have allowed opponents to convert 43 of 88 (48.9%) third-down attempts, which ranks last in the Pac-12. Colorado is first at 32.9% and six other conference teams are also under 40%.

Smith said improving his team’s number was an emphasis during the bye week. The coaching staff spent last Monday evaluating its team’s performances through six games.

“Definitely where we’re at is not where we want to be this year. We took a heavy look at it on Monday, and there’s a lot of things that have gone into it,” Smith said. “It’s deflating, especially when it’s third and longer to get ourselves off the field. Not going to tell our opponent this coming week maybe what adjustments need to be made, but the adjustments need to be made."

The coach said factors include schematics and the players making plays when they’re in position to make them.

“And at the same time we play some offenses that are effective now. Sometimes we’re so focused on ourselves that we’ve got to give credit to our opponents,” he added.

OSU redshirt sophomore Marco Brewer has proven to be a valuable asset as a backup on the offensive line.

The Corvallis High alum is in his second year in the program after transferring from Laney College. He used his redshirt last season and didn’t play.

“He’s been working hard. He’s got some position flexibility at tackle and guard,” Smith said. “We feel confident putting him in the game, we really do. He’s gotten in a few times. He prepares each week and he’s prepared to play.”

Oregon State’s defensive unit has had a lot of time to think about its performance in the second half of the loss at Washington State on Oct. 9.

After what coach Jonathan Smith called a productive bye week, Trevon Bradford (8) and Oregon State get back to their schedule Saturday by hosting Utah.

Oregon State defensive back Alex Austin (5) tackles Washington State wide receiver Travell Harris in the Oct. 9 game in Pullman, Washington. The Beavers will try to improve on their conference-worst defensive third-down conversion percentage as they come off a bye to host Utah on Saturday.