Become a Member
Read Today's E-edition
Share This
OSU football: Beavers want to execute at the their best against Ducks
0 Comments
Share this 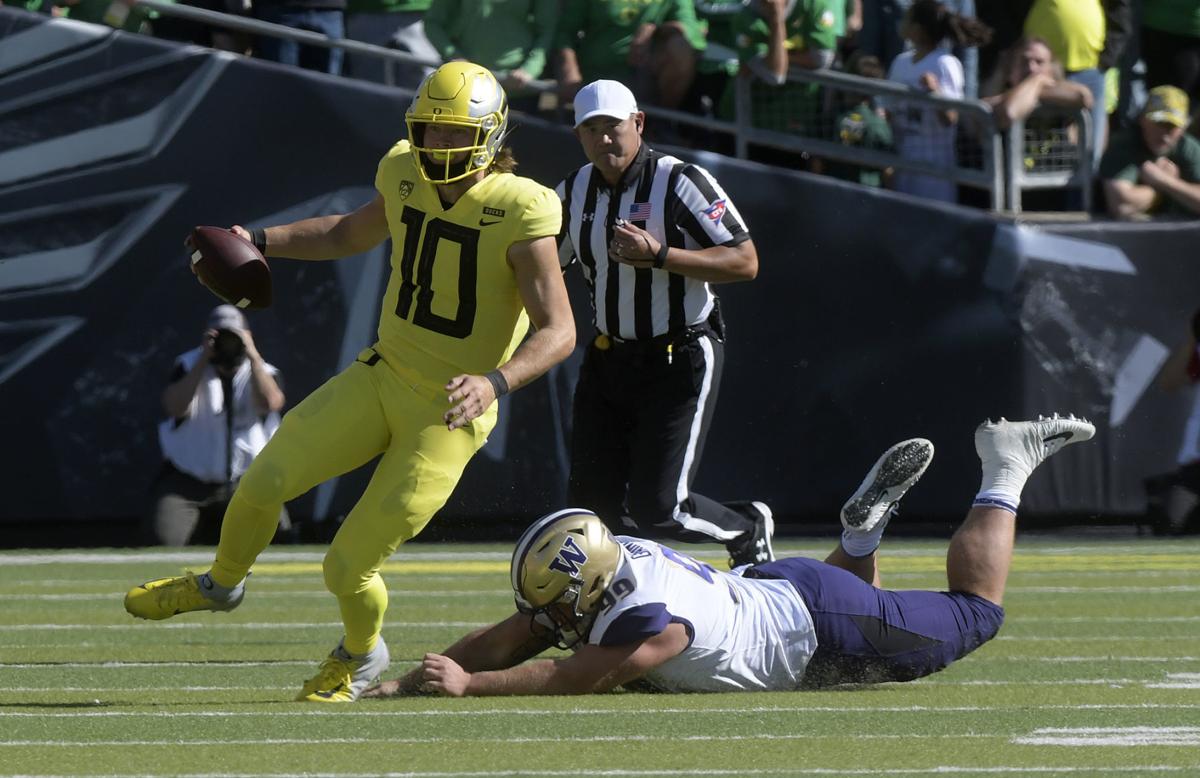 Oregon quarterback Justin Herbert, left, scrambles away from a Washington defender earlier this season. The Beavers know Herbert can scramble when pressured, making him an even greater threat. 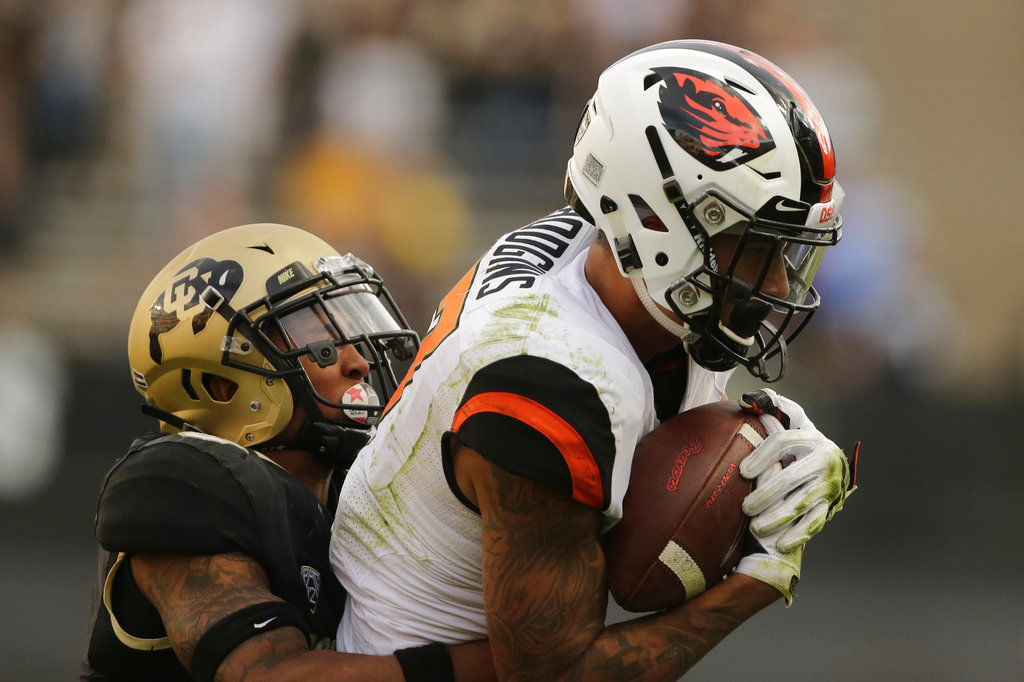 Oregon State wide receiver Isaiah Hodgins pulls in a pass in the second half against Colorado. Hodgins leads the Beavers with 743 receiving yards.

Oregon State isn’t playing for a bowl game when the Beavers square off with rival Oregon in Friday’s Civil War — set for 1 p.m. Friday at Reser Stadium.

The Beavers have found success on offense this season, averaging 411.0 yards per game, good for sixth in the Pac-12.

Running back Jermar Jefferson has keyed the ground game and is averaging 119.6 yards per game. He set the school record for rushing yards in a season by a true freshman last Saturday at Washington and enters the game with 1,316 to go with 12 touchdowns.

"You see a lot of explosive play-makers,” UO coach Mario Cristobal said of the Beavers. “Obviously the back has garnered a lot of attention, and rightfully so, as a freshman he's widely considered one of the best freshmen in the country. The offensive line has done a tremendous job for him.

“There's a lot of carryover from what you've seen in coach Smith's history. He does a great job, great football coach, extremely smart. They scheme you up pretty well. They understand where the holes are, they go after it.

“From Game 1 against Ohio State, coming back like they did against Colorado, they continue to churn out yards and points.”

Lindgren knows the offense has a big challenge ahead against the Ducks, coached by Jim Leavitt. The two were on staff together at Colorado.

Lindgren said Leavitt’s defenses aren’t complex but they are sound in what they do.

“He’s one of the best football coaches that I’ve been around and fortunate enough to coach with,” Lindgren said. “He gets those guys to play extremely hard. Shoot, those years at Colorado we were damn good on defense.”

Oregon State quarterback Jake Luton, who has started the last three games after finally being healthy, said the Beavers don’t have much of an advantage even though Lindgren is familiar with Leavitt.

“We’re going to have to be on our game and be consistent throughout and have to play ball,” he said.

The Beavers want to make sure they finish drives by getting into the end zone.

“We moved the ball and then had to settle for field goals and in the end I think that ended up being a little bit of a difference, too,” Lindgren said of the Washington game where the Beavers kicked three field goals and attempted a fourth. “You can’t go on the road and end up kicking field goals and expect to win.”

Oregon State will have to contend with Oregon quarterback Justin Herbert, who had a big game last year at Autzen. Herbert is third in the Pac-12 at 262.1 yards per game. He has throw for 2,883 yards and 27 touchdowns.

“He can make all the throws plus has good mobility,” defensive coordinator Tim Tibesar said. “So he’s a complete package and a tough guy to defend. Even when you get to him he’s strong enough in the pocket that the first guy sometimes can’t get him down and he can scramble out of there. So he’s a real challenge."

Cristobal is well aware of Smith’s propensity to throw in some trick plays at any time in the game.

Staying disciplined has been a topic of discussion.

“Discipline is at a premium, it always has been,” Cristobal said. “No. 1, that can never change, that always has to be one of the absolute principles and values of what you do. You show them the tape so that you understand. Some other teams might have shown one every now and then (and) maybe not run it. But these guys do, they run it. So don't let your eyes drift.

“Don't take for granted your responsibility has been taken care of. Make sure you go through the echo of the whistle and beyond to assure that we don't get surprised by one of those plays because you saw the kickoff, you saw the fake punt. Those are things that are game-changers, gaining possessions. We've got to make sure that we're on the road playing a conference game we can't give up any possessions."

The Beavers ended an eight-game losing streak to the Ducks with a 34-24 home win in 2016. The Ducks responded with a 69-10 thrashing at Autzen last season.

“It was a bad game last year and it was embarrassing in that regard,” said senior center Sumner Houston. “But like we’ve done a lot this season we flush it and we’re moving forward. This is a new team and we’re going to give it hell.”

OSU football: The 1998 Civil War was a turning point for the Beavers

One of the biggest moments in Oregon State football history came 20 years ago in the Civil War game.

Oregon State will go through a short walk through Thursday morning before the coaches, players, staff members and many of their families gathe…

Watching Jermar Jefferson the first few weeks of August camp, it was apparent the true freshman running back was going to make some kind of an…

Monday’s weather, a sunny but chilly November day, reminded Jonathan Smith of one of his best moments as Oregon State’s quarterback.

OSU football: Highs and lows for special teams against UW

Oregon quarterback Justin Herbert, left, scrambles away from a Washington defender earlier this season. The Beavers know Herbert can scramble when pressured, making him an even greater threat.

Oregon State wide receiver Isaiah Hodgins pulls in a pass in the second half against Colorado. Hodgins leads the Beavers with 743 receiving yards.