Become a Member
Read Today's E-edition
Share This
OSU football: Colletto finds success while carrying a lot on his plate
0 Comments
Share this 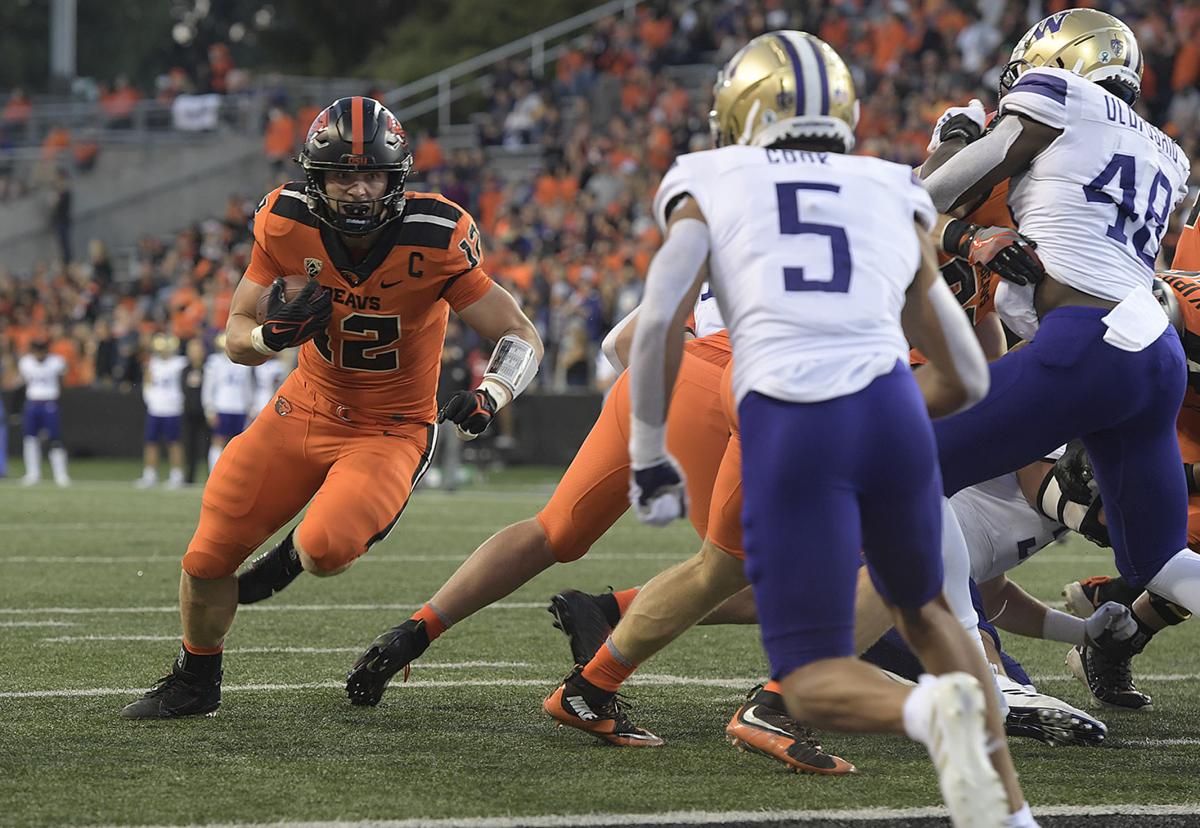 Jack Colletto runs for a 3-yard touchdown early in the second quarter last Saturday that helped Oregon State tie the game with Washington. Colletto has been an impact player for the Beavers on offense, defense and special teams the past two seasons. 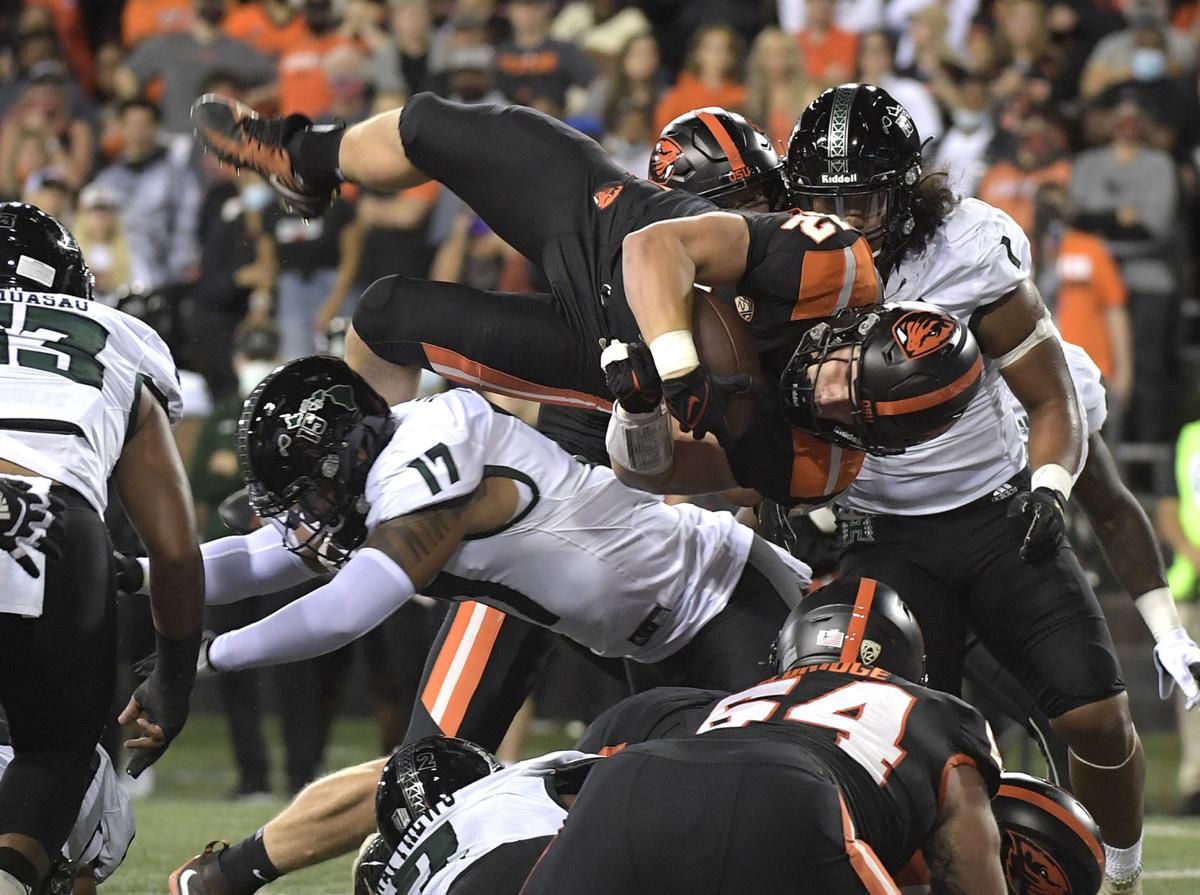 During the Oregon State football season, there are intensive studies as a mechanical engineering major, practice, watching film and team meetings, all to be crammed into the Monday-through-Friday grind.

Adding on top of that the fact that Colletto plays multiple positions on offense and defense and contributes on special teams, time management isn’t a factor.

Colletto has proven to be more than just a jack-of-all-trades, someone who can do various tasks at a passable level.

Having entered the Oregon State program as a quarterback in 2018 after one season at Arizona Western College, the Camas, Washington, product’s role has evolved into one of a short-yardage runner and wildcat target who can play two linebacker spots and makes tackles on special teams.

With all those responsibilities, Colletto’s week is filled with watching opponent game film on all three phases of the game.

“That is the process that does take a while, because I have to watch tape on everything, special teams, offense and defense. Yeah, long days during the week. Very long days,” he said. “It’s fun. But I also love sleep, too, so sometimes I’m like, ‘OK, I’m ready for bed.’ But I enjoy it.”

Through five games this season, the 6-foot-3, 239-pound redshirt junior has rushed 14 times for 44 yards and four touchdowns with no negative plays. Defensively he’s made four tackles, one for a loss, and one interception.

With two touchdowns and the pick in the Sept. 25 45-27 win at USC, Colletto became the first player in a Football Bowl Subdivision game to record those statistics in a single game since 2004. It was just the fifth time that’s been accomplished in the past 26 seasons.

But which is more fun, making a big defensive play or scoring an offensive touchdown?

“Either one,” Colletto said as Beavers defensive coordinator Tim Tibesar playfully leaned into Wednesday’s media scrum and put his hand to his ear as the question was asked. “As long as we win, coach, it doesn’t matter. Winning, that’s my answer.”

Tibesar said he’s never in his 25 years of coaching had a player like Colletto who can take on as much as he does.

“Obviously his football IQ and his regular IQ are off the charts, and the ability for him to process that information … you’re talking about learning two full positions on offense, two positions on defense and all the different spots that he’s playing on special teams,” Tibesar said. “There’s a lot of guys who struggle with one side of the ball and special teams. And to be able to do that is impressive.”

Colletto made one start at quarterback in 2018, in an overtime win at Colorado. He made the move to linebacker the following spring but continued to see some time at quarterback.

It was the 2020 season where he fully emerged as a two-way player. He rushed 15 times for 128 yards and two touchdowns in OSU’s seven games while also making 14 tackles.

Most of Colletto’s runs are straight-ahead dives to gain a yard or two. Clearly, he isn’t afraid to mix it up and get physical.

“I was a little brother and my older brother (Nick) would always pick on me, so I had to get him back. I guess that’s where it originated from and it grew from there.”

That physicality, and his ability to help extend offensive drives, fires up his teammates.

“Especially at inside backer, we love when Jack makes plays,” said OSU’s Avery Roberts. “I always say he’s the best football player on the team. Throw him anywhere and he could play. We take huge pride in Jack’s success and love everything he does.”

Much has changed for Colletto since 2019, when he made the switch to what was expected to be primarily a defensive role. But it became too difficult for the coaching staff to keep him off the field.

Moving over to defense, Colletto said he hoped that he could make an impact in all three phases and envisioned himself reaching that point. He just didn’t know if it would become reality. He was more focused on what was directly in front of him.

But it eventually became real. This past Saturday, in the home win against Washington, he was on the field for 13 offensive snaps.

“That’s just my philosophy. If you can get on the field and play, it’s a lot better than standing and watching. If you’re helping the team contribute and you’re in the competition aspect of it, that makes Saturdays so much more enjoyable and fun,” Colletto said. “After last year I kind of knew what I was capable of, it’s just enhancing the role and continuing to improve on what I already do.”

Oregon State outside linebacker Andrzej Hughes-Murray is one of 30 candidates for the prestigious Senior CLASS Award.

To be eligible for the honor, candidates, who are nominated by their respective schools, must be a Division I senior or graduate student and have notable achievements in four areas of excellence: community, classroom, character and competition.

Hughes-Murray has played in 42 career games for the Beavers, totaling 118 tackles with 17.5 tackles for loss and eight sacks. He also has two fumble recoveries, two blocked kicks and four pass deflections.

Off the field, he is a four-time Pac-12 all-academic honoree and is a three-time Campbell Trophy semifinalist. The Campbell Trophy is given annually to the nation’s top collegiate football scholar-athlete who shows combined academic success, football performance and exemplary leadership.

He is also a nominee for the 2021 AFCA Good Works Team.

Oregon State took a giant step up in competition Saturday night at the L.A. Memorial Coliseum and the running game didn’t miss a step.

All kickoffs at 7 p.m.; OSAA coaches poll rankings in parentheses

The game clock at RedHawks Stadium read 8:05 in the fourth quarter Friday night when South Albany took possession at its own 28, having stoppe…

Oregon State’s four-game winning streak came to an end Saturday afternoon with a 31-24 loss to Washington State in Pullman, Washington.

OSU football: Confident in his team, Smith saw potential for a breakthrough season

Jonathan Smith saw before the season the potential for and confidence in his team’s ability to win games, which has led to Oregon State footba…

OSU football: Despite limited catches, tight ends are providing value to the offense

Oregon State’s tight ends continue to have a limited role in the Beavers’ passing game.

Jack Colletto runs for a 3-yard touchdown early in the second quarter last Saturday that helped Oregon State tie the game with Washington. Colletto has been an impact player for the Beavers on offense, defense and special teams the past two seasons.