Making the shift to electric vehicles

OSU football: Defense comes through with game-changing plays in crucial moments
Share this
{{featured_button_text}}
1 of 2 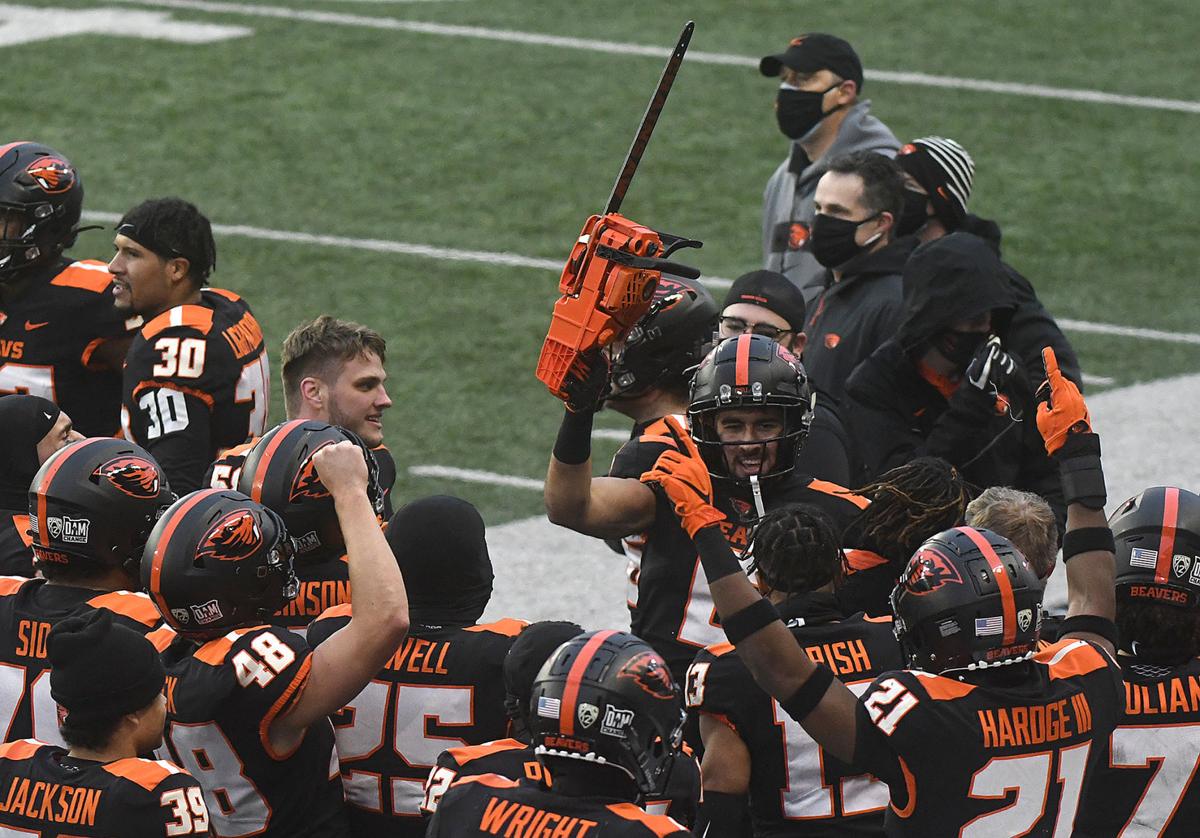 Oregon State's John McCartan raises the turnover chainsaw in celebration of his fourth quarter interception that helped seal the Beavers victory over California at Reser Stadium in Corvallis. 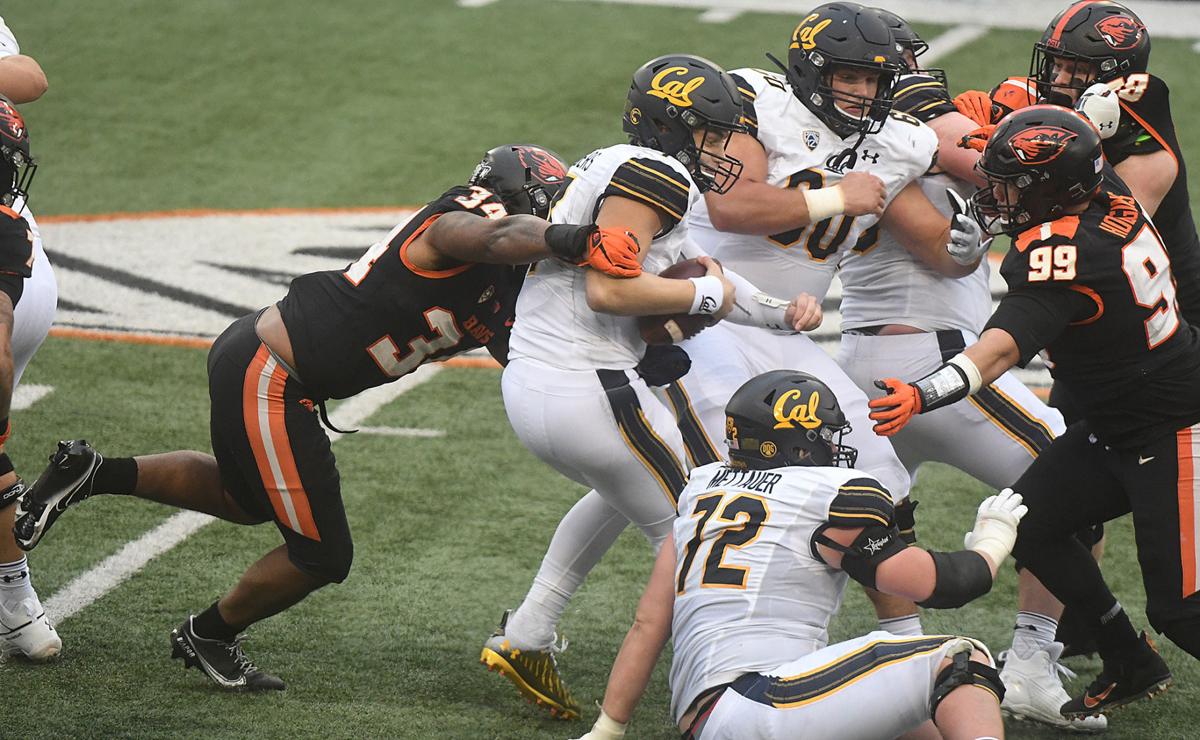 There was a resiliency to Oregon State’s defense Saturday afternoon.

It didn’t have much of a choice, really, as the game saw California’s offense snap the ball 81 times.

The Beavers’ defense wasn’t perfect, but it provided its own offense opportunities and came up with big plays late when they were needed most.

John McCartan’s interception of a tipped pass by teammate Hamilcar Rashed Jr. was the final game-changer by the defense and the one that put OSU over the top in a 31-27 Pac-12 football win at Reser Stadium.

Oregon State (1-2) was forced to defend for more than 38 minutes of game time while giving up 439 yards and 24 first downs. But in the end it came down to what the Beavers did in the final two quarters of a close contest.

After watching Cal (0-2) strike repeatedly in the first half for a 20-14 lead, the Oregon State defense got off the field quickly to open the third quarter thanks to two tackles for loss on Cal running plays.

After the Beavers closed within three on a field goal, a holding penalty negated a kickoff return of more than 95 yards by the Bears. It also pinned Cal at its own 8.

The Beavers would allow just one first down — and get their first sack of the game when Isaac Hodgins and Roberts got to quarterback Chase Garbers — before the Bears punted the ball back.

Trevon Bradford’s ensuing 36-yard return had Oregon State in business across midfield, and the Beavers would grab the lead early in the fourth when quarterback Tristan Gebbia caught a touchdown pass from Tyjon Lindsey on a trick play.

The OSU defense gained more momentum after Akili Arnold got into the backfield to tackle Marcel Dancy on a 3rd-and-2 run and give the ball back to the offense after a punt.

But a costly Gebbia interception gave the defense little yardage to defend.

Starting at the Beavers’ 32, the Bears used two OSU pass interference penalties to regain the lead on a Jake Tonges 2-yard touchdown reception.

Pressed to get the ball back after an OSU three-and-out, Jaydon Grant dived to knock down a third-down pass and Jesiah Irish got through to block a punt, setting up Gebbia’s 1-yard keeper for the go-ahead touchdown with 4:30 remaining.

“Football’s the ultimate team game, right?” Gebbia said. “For all of us to come out on top and the defense and special teams helping us out there a lot of places was so awesome to see. I think this is some momentum we can carry into the rest of the season hopefully.”

But the defense’s job wasn’t done, as Cal would move the ball from its own 21 to the OSU 20 in 10 plays with the help of three gains of double-digit yardage.

A holding penalty put the ball on the 10. Rashed got his hand on Garbers' throw, sending it high into the air before McCartan came down with it.

Moments later, Jermar Jefferson and the offense put the finishing touches on the Beavers’ first win of the season.

“We’ve got a mantra of make them snap it again, and that’s kind of what we did defensively and came up with the turnover,” OSU coach Jonathan Smith said.

Roberts and fellow linebacker Omar Speights each had a team-high 10 tackles, both with two for losses. Cornerback Alex Austin added eight tackles.

The Bears were 3 of 8 converting third downs in the second half after going 6 of 11 before halftime.

Cal had little trouble on its opening drive of the game, covering 75 yards on eight plays for a touchdown. Kekoa Crawford’s 45-yard catch and run to the OSU 7 set up Makai Polk’s 7-yard scoring catch.

The Beaver defense found some traction on the Bears’ next possession, forcing a three-and-out that, combined with a short punt, resulted in a short field for the offense and led to Oregon State going back ahead.

Cal later converted three third downs in addition to a 33-yard reception that helped the Bears get three points on their next drive.

The Beavers gave up more big plays — notable a 19-yard grab by Crawford on a third down — after the Bears started at their own 20 early in the second quarter. But OSU stole some momentum back when Nahshon Wright brought out the “turnover chainsaw” after his interception in the end zone after Cal had reached the Beavers 2.

A 28-yard punt off the side of the foot of OSU’s Caleb Lightbourn gave Cal its own short field, and the Bears turned it into seven points with two plays of more than 20 yards.

Cal looked to be in excellent position for more when a Gebbia pass went off a receiver’s hand and Josh Drayden returned it deep into OSU territory. But a Bears’ penalty on the return pushed the ball back to the Cal 35. The visitors still got something out of it as Dario Longhetto kicked a 52-yard field goal as time expired in the half for a 20-14 lead.

On Thursday, the Pac-12 gave its member schools clearance to schedule football games with nonconference opponents this season.

With an accounting degree in hand and a job offer to consider, Will Heck was at a crossroads.

Oregon State fought its way to a gutsy 31-27 win Saturday and kept its season on the rails against a tough California Golden Bears team.

OSU football: Nolan gets some reps with the starters

Oregon State may be nowhere near making a quarterback change from the sound of things, but if the need to do so arises, backup Chance Nolan wi…

Oregon football: Ducks' offense disappears in second half of loss at Cal

Turnovers and offensive struggles after halftime cost Oregon a chance at a win for a second straight week.

Oregon State's John McCartan raises the turnover chainsaw in celebration of his fourth quarter interception that helped seal the Beavers victory over California at Reser Stadium in Corvallis.