Become a Member
Read Today's E-edition
Share This
OSU football: Defense got the job done versus Stanford
0 Comments
Share this
1 of 2 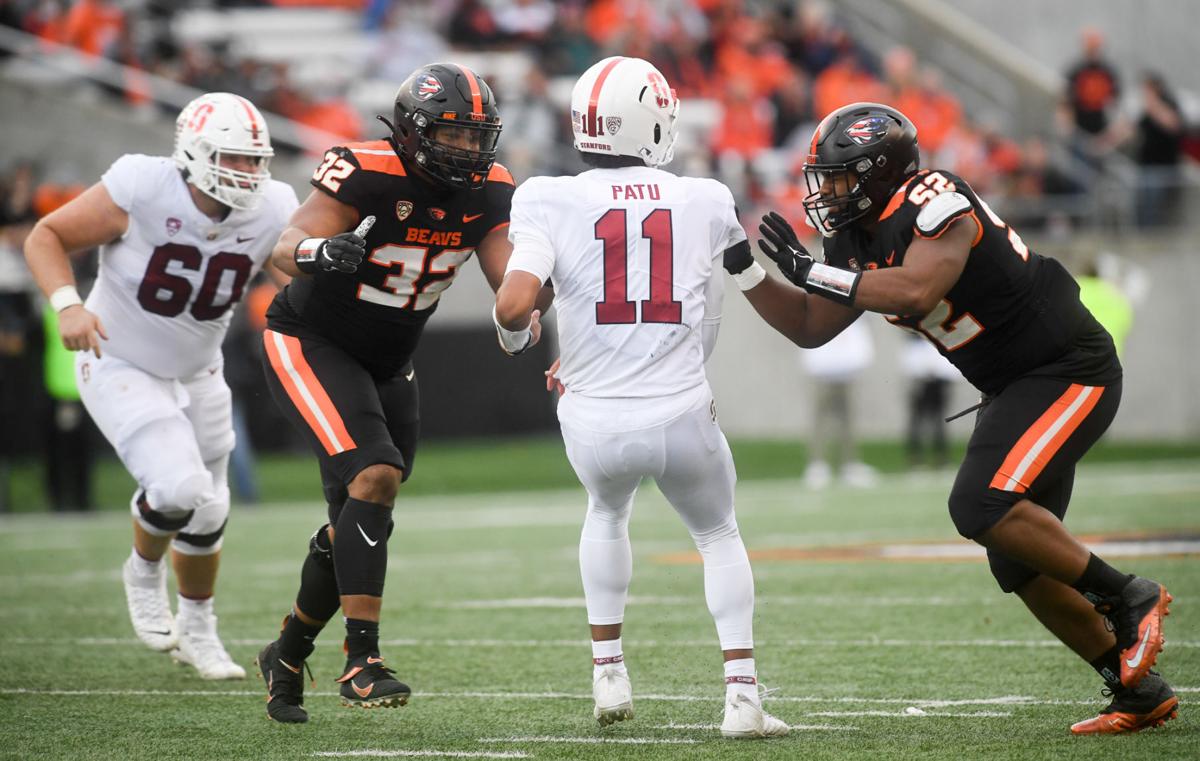 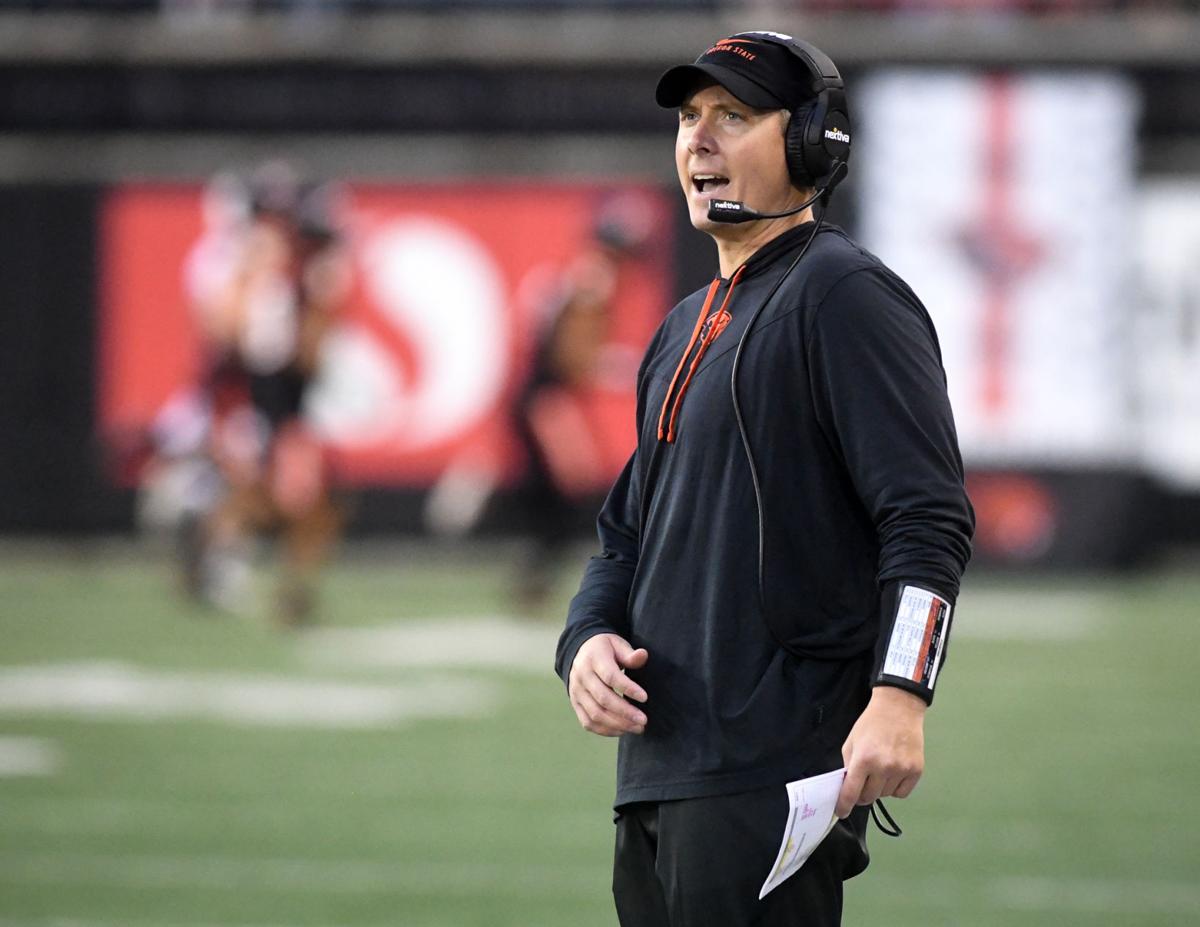 Trent Bray looks on during his first game as Oregon State's interim defensive coordinator. The Beavers held the Cardinal to 230 total offensive yards.

Oregon State wasn’t facing one of the most imposing offenses that Pac-12 football has to offer last Saturday, but the Beavers accomplished a goal and got that elusive sixth win for bowl eligibility out of the way with a 35-14 victory at Reser Stadium.

The Beavers held the Cardinal to 230 yards of total offense and didn’t allow the visitors to get on the scoreboard until the second half, with the home team already up 21-0.

The OSU defense finally got a takeaway, something that had eluded the Beavers the previous three games. Jaydon Grant and Rejzohn Wright had interceptions and Keonte Schad recovered a fumble.

Oregon State coach Jonathan Smith recognized it was a Stanford offense that’s been hit hard with injuries. Notably, the Cardinal were without Tanner McKee, their starting quarterback.

“At the same time, defensively, they were where they needed to be, sound in their assignments and tackled well, played aggressive … so there’s positives there,” Smith said of his team during his regular Monday press conference.

The Beavers defense, with Trent Bray in his first game as the new coordinator, got solid results in playing man-to-man coverage (Stanford had 94 yards passing) in the secondary, which was also effective in defending the run game, Smith said.

OSU (6-4, 4-3) gave up 4 of 11 third-down conversions, lowering their season average to 49.7, which is still dead last in the conference. Smith credited the improvement in part of better work on first and second downs, which led to longer conversion yardage for the Cardinal (3-7, 2-6) on third downs.

“I thought they put together a couple pressures that affected the quarterback and he needed to get the ball out a little bit sooner,” Smith said. “Then I go back to the coverage was tighter.”

But the Beavers were without a sack for the fourth straight game and have just one total in the last five contests. OSU recorded three tackles for loss versus Stanford, the Beavers’ lowest single-game total save for one — against California, when they had one TFL — in the past six.

Oregon State got five offensive touchdowns, keeping the Beavers’ among the Pac-12’s top scoring teams. They piled up 475 yards and 29 first downs (to Stanford’s 15) to keep moving the sticks and stay in control in the game.

“We scored enough, and what we did is take care of the ball. We didn’t give it away. That was awesome,” Smith said. “I think we had some real balance in the run-pass game. The limiting factor was our penalties and we’ve got to tighten up that. I think we had three holding calls in the first half that more or less stalled drives out. We want to improve on that.”

Running back B.J. Baylor surpassed 1,000 rushing yards for the season with 80 yards and a touchdown on 23 carries. Smith said Baylor would credit the offensive line and tight ends for the blocks that helped get him there.

This season marked the first time Baylor, in his fifth year in the program, has been the Beavers’ lead back.

“I do give him a lot of credit and respect for being patient, from when he arrived here, continuing to work hard,” Smith said. “Didn’t see a bunch of carries having guys in front of him. That’s not always easy but he kept plugging away and he’s reaping the benefit of that right now.”

Smith said he didn’t sense any anxiety or tension among his players after two straight road losses to California and Colorado while on the cusp of becoming bowl eligible.

OSU left no doubt with its performance last week. Now it’s on to a Saturday home game against Arizona State (7-3, 5-2).

“These guys have been working, competing, and we didn’t play as well as we could in those two games,” Smith said. “So whether it’s the relief of six and whatnot, I know we’re there now and hoping these guys will let it rip on Saturday.”

Stanford has a quarterback carousel that seems to have possibly stopped on a true freshman entering Saturday’s Pac-12 football game at Oregon State.

Ahmad Rand entered Tuesday’s game for the first time in the second half and made an immediate impact.

OSU football: Beavers glad to be staying home this weekend

Oregon State football has found success playing at home this season, winning all four in Corvallis.

Tulsa’s one extended offensive run was too much for Oregon State to overcome.

For the first time in four weeks, Oregon State heads into a football game with an opponent that has legitimate chances of participating in a m…

Trent Bray looks on during his first game as Oregon State's interim defensive coordinator. The Beavers held the Cardinal to 230 total offensive yards.