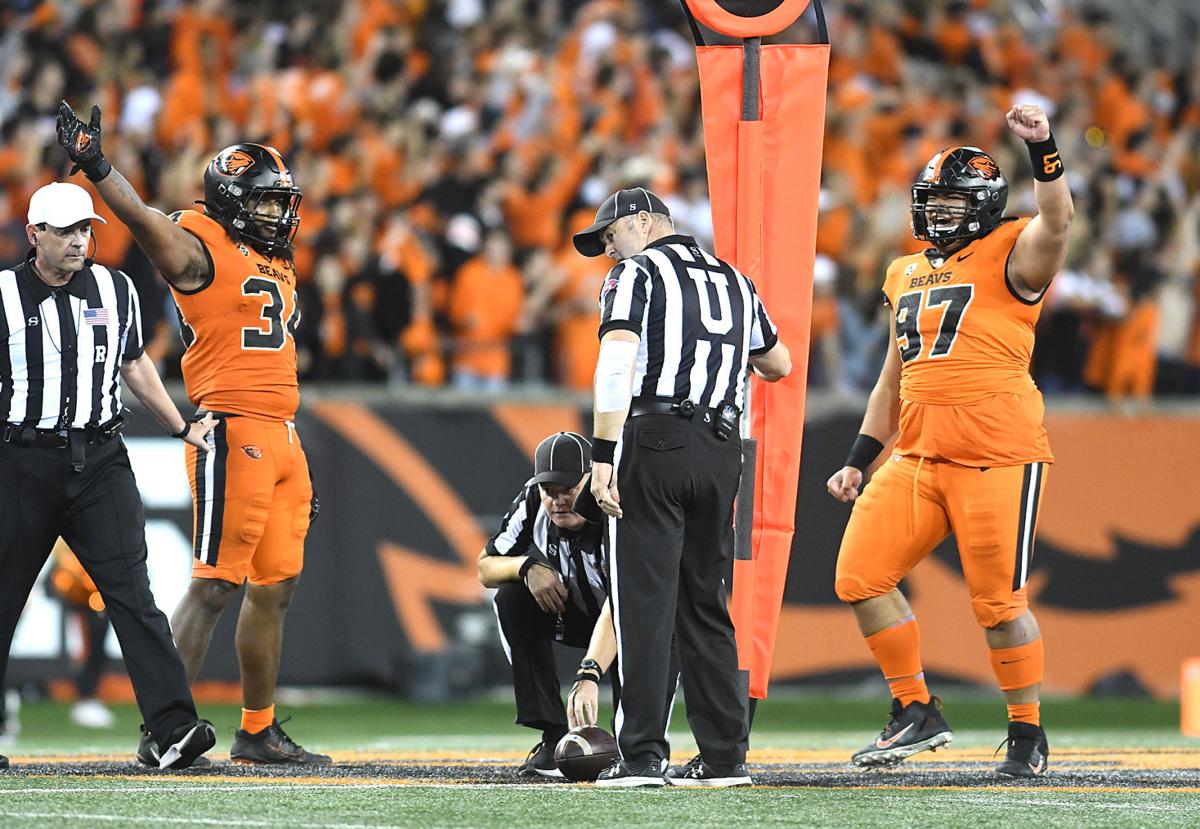 Oregon State's Avery Roberts (34) and Alexander Skelton celebrates after the Beavers turned Washington over on downs in the closing minutes. Roberts was named the Pac-12 defensive player of the week after recording 16 tackles against the Huskies. 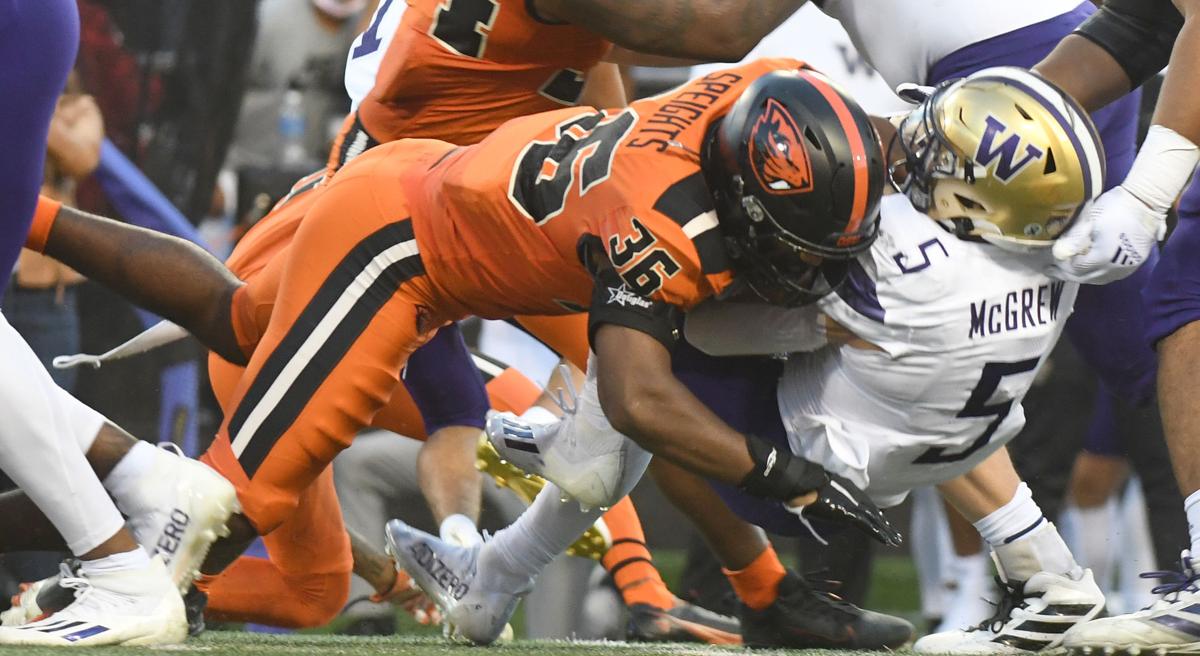 Oregon State's Omar Speights tackles Washington's Sean McGrew. The Beavers got the win despite struggling to defend and tackle McGrew in the wildcat formation. McGrew rushed for 104 yards and two touchdowns on 16 carries.

That was coach Jonathan Smith’s initial assessment when asked Monday about the Beavers’ defensive production since the season-opening loss at Purdue.

Four weeks since that defeat, statistics prove out that Oregon State is one of the Pac-12’s top defensive squads. The Beavers are second against the run at 107.2 yards a game, third in scoring (21.6), fourth in total defense (359.2 yards) and ninth versus the pass (252.0).

“I do think that the line of scrimmage has been better this year, and that’s allowed the linebackers like Avery Roberts to have the production he is because we’re doing some things at the line of scrimmage keeping him free,” said Smith, whose team has won four straight and is now 4-1 overall and 2-0 in conference play heading into Saturday’s game at Washington State (2-3, 1-2).

“Each week on defense though there’s always things that we’ve got to get better. Because on defense you can play 65 great snaps but if there are six or seven others that aren’t very good that means points. And I go back to our ability to tackle needs to improve if we’re going to have the type of games and win games that we want.”

Roberts, a redshirt junior inside linebacker, was named the Pac-12 defensive player of the week after piling up 16 tackles in last Saturday’s 27-24 home win against Washington.

Oregon State is second in the Pac-12 in sacks at 12, with three apiece from outside linebackers Andrzej Hughes-Murray and Riley Sharp. Sharp is tied for fourth in the conference with 1.0 tackle for loss per contest.

Roberts’ interception against Washington gave the Beavers nine this season (good for fifth in the conference), each from a different player.

Love for the kicker

Everett Hayes was one of OSU’s heroes against the Huskies when he kicked the game-winning 24-yard field goal as time expired.

“Hopefully it’s another step in his confidence, because the guy has been playing well,” Smith said of the game-winner. “I know he missed the one. But the way he’s been kicking off … we’ve got a bunch of confidence. He had a big kick against SC (a season-best 42-yarder) that was way longer than the game-winner. And I think it’s just for our team. Any time you’ve got enough confidence in the guy when the game’s on the line. The whole strategy the last two minutes was because we had confidence in Everett making the kick. I think that says something to Everett.”

And love for the punter

Luke Loecher was the holder on Hayes’ winning kick Saturday, but he also punted four times for a 53.2 average with two downed inside the Washington 20.

Loecher had a 63-yard punt from Oregon State’s 11 in the fourth quarter that pushed the Huskies back to their own 26.

“It flips the field on that play … and he’s getting pressured,” Smith said. “We didn’t block that totally the way we wanted, the protection for him. And he’s been hitting great, not just the length of it but the direction of where he’s placing it, the timing that he’s getting it out.”

On plays where Loecher hasn’t been pressured, Smith said, he’s held the ball for a few ticks longer to help out his coverage team. He’s played well each week and has repeatedly executed the plan.

It said something about the Beavers that they could have a sub-par game passing the ball and still get a win against a good team, Smith said.

Quarterback Chance Nolan was 7-of-15 passing for 48 yards and an interception and was sacked twice.

“He struggled to catch any type of rhythm. He missed a couple of early throws. We were running the ball a lot, so it didn’t totally allow him to get into rhythm in the passing game,” Smith said, crediting Washington for often dropping eight defenders into cover and making it difficult to throw against.

The coach also praised Nolan for coming up big late in the game with a 22-yard pass to Anthony Gould that helped OSU tie it up on a B.J. Baylor touchdown run with 6:35 left.

“You’re going to have nights like that,” Smith said. “We’re running the ball with success. We’re not trying to win the stat deal, we’re trying to win the game. And we never really needed the rhythm in the passing game.”

Oregon State's Avery Roberts (34) and Alexander Skelton celebrates after the Beavers turned Washington over on downs in the closing minutes. Roberts was named the Pac-12 defensive player of the week after recording 16 tackles against the Huskies.

Oregon State's Omar Speights tackles Washington's Sean McGrew. The Beavers got the win despite struggling to defend and tackle McGrew in the wildcat formation. McGrew rushed for 104 yards and two touchdowns on 16 carries.