OSU football: Defense shines at final scrimmage of camp
Share this
{{featured_button_text}}
1 of 3 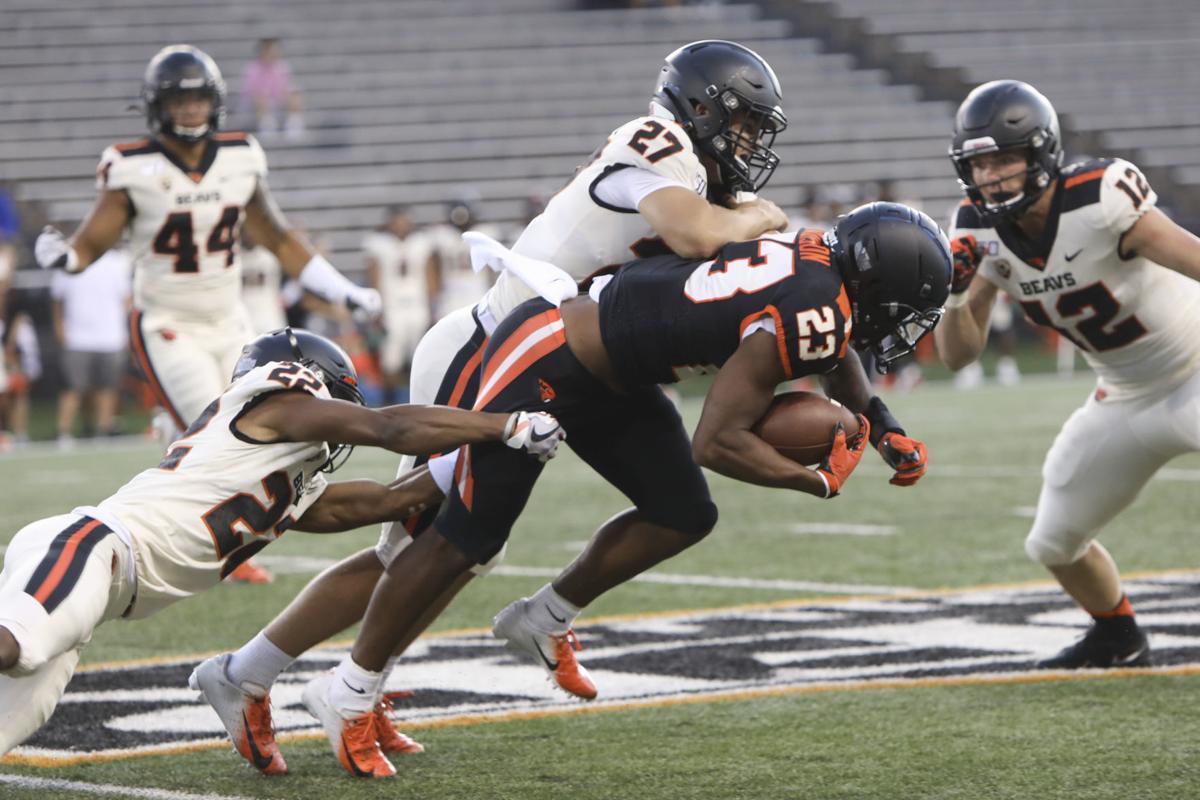 Oregon State running back Ta'Ron Madison is brought down by teammates during Saturday's scrimmage. The defense didn't allow many big plays in the run game. 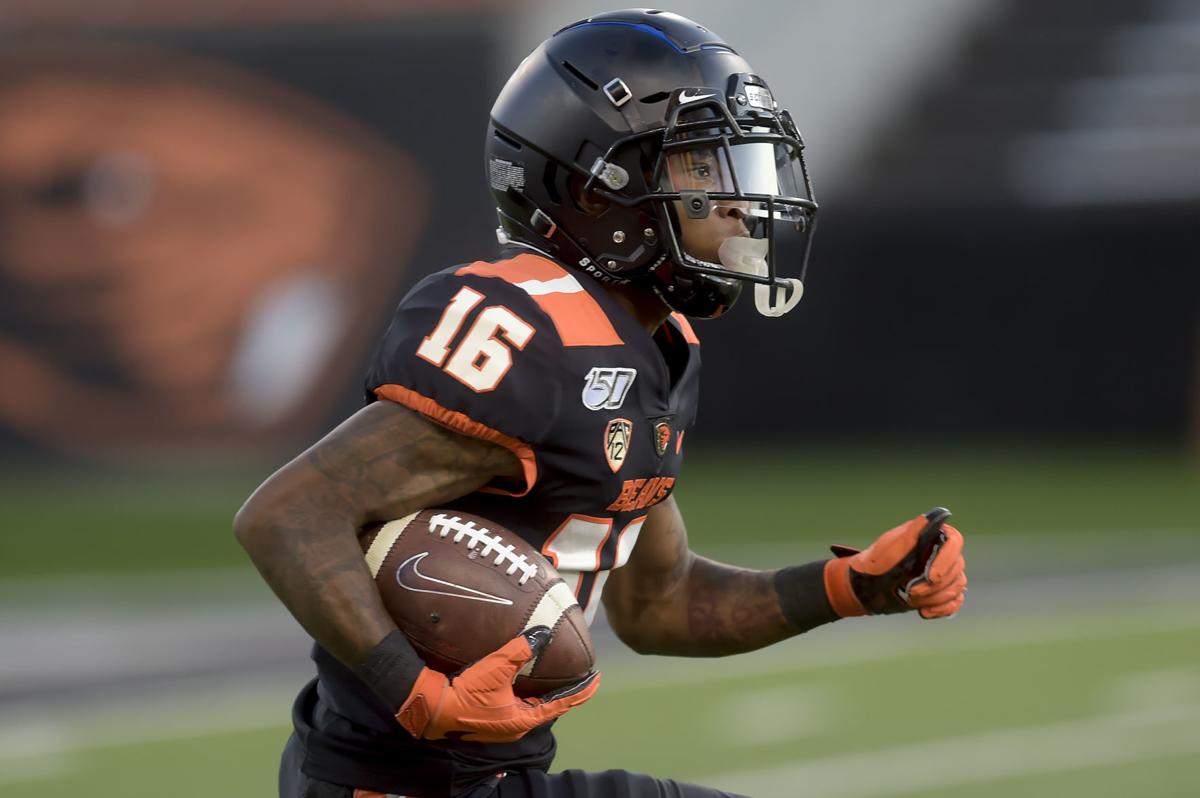 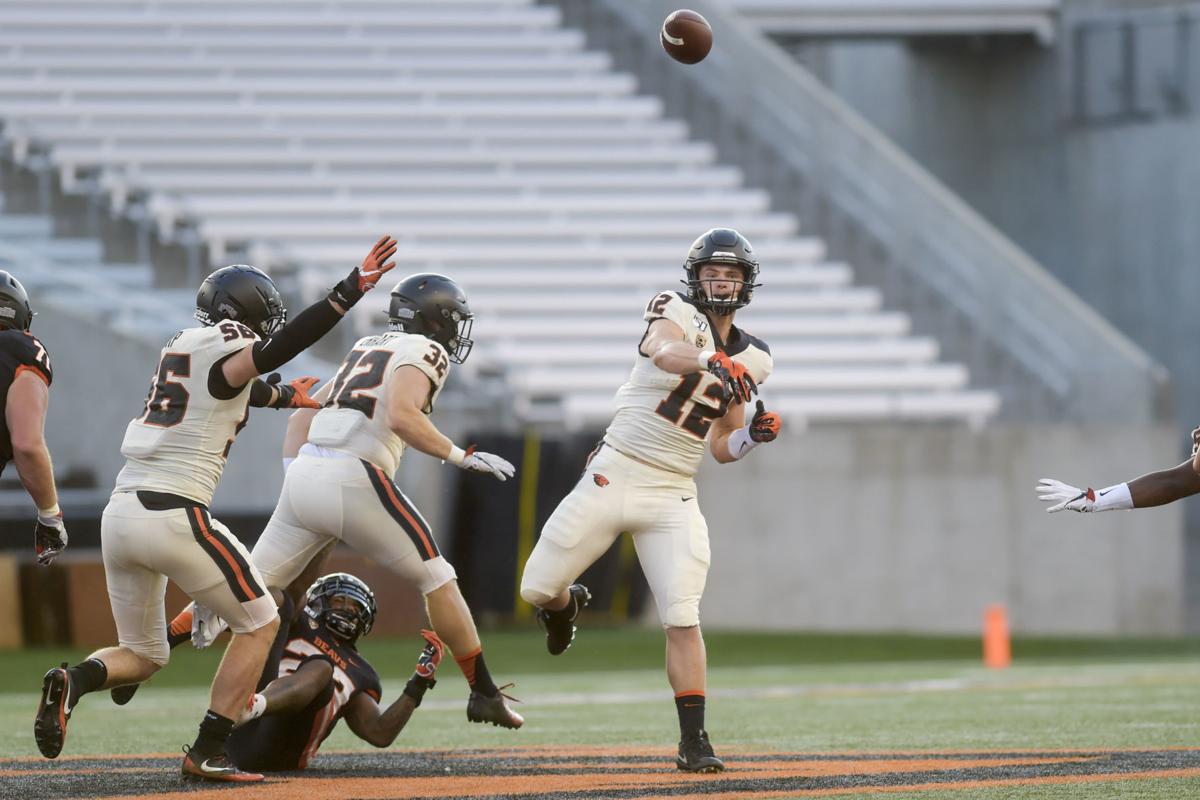 Despite moving to linebacker, Jack Colletto got some reps with the third-string offense and on the goal line in Saturday's scrimmage.

Oregon State’s defensive players aren’t shying away from the fact they had a dismal 2018 season.

And they are bound and determined to prove that won’t be the case this season.

The defense more than held its own during Saturday night’s final scrimmage of training camp and by almost all accounts had the best of it as the team battled back and forth for a little over 90 minutes inside Reser Stadium.

Fellow linebacker Avery Roberts, a transfer from Nebraska who sat out last season while at Oregon State, said the entire defense, from the defensive line to the linebackers and the secondary, has elevated its play.

And, he said, they are “more bought in” this camp.

“I think, honestly, guys genuinely care more,” he said. “That’s really what it comes down to. Guys are really trying much harder, not only on the field but after (practice) trying to get better and I think that makes the difference.”

Added depth, especially along the defensive line, has been a big key, Smith said.

“We’ve got new pieces to the puzzle so now we’ve got more angrier guys, more hungrier guys ready to make plays in the backfield,” he said.

A second year in the system for many of the players has also played a role.

“I feel like we was more aggressive, we was more sound and able to run to the ball faster, get there faster and make big plays,” said defensive lineman Jordan Whittley, a transfer from Laney College. “We have a lot of depth at a lot of positions so if the first guy comes out, the second guy comes in and does a lot of good.”

The defense did give up a 99-yard drive to open the scrimmage, with quarterback Jake Luton hitting Isaiah Hodgins for a big gain and then connecting with tight end Noah Togiai on a third-down play to keep the drive alive.

One play later, Jermar Jefferson skied over a defender and into the end zone for a rushing touchdown.

“He’s healthy, he’s excited about getting some carries and it was a nice play to score,” coach Jonathan Smith said of Jefferson’s run.

Luton wouldn’t go as far as to say the defense won the scrimmage.

“I thought it was good competition,” he said. “There was a lot of back and forth I think the offense showed some bright spots and the defense made a lot of good stops and that’s what you want out of a good scrimmage.”

Still, Luton has seen the improvement the defense has made.

"Just their willingness to compete," he said. "They come out every day and they bring it and we have a lot of back and forth every day."

Tristan Gebbia, in a battle with Luton to be the starter, also had some good moments as he connected with Aaron Short for a nice play for a score and led another scoring drive capped off by a 1-yard run by Calvin Tyler. He hit Luke Musgrave on a deep pass to the 1 to set up the TD.

He also showed his running ability, whether or not he thinks that is part of his repertoire, as he scrambled for a score late on a play he wouldn’t be denied.

“If it’s my choice I think I would rather have Jermar and BJ (Baylor) run it in but whatever we’ve got to do to win the game I’m going to try to do,” Gebbia said. “But I definitely think I like throwing from the pocket better than running the ball.”

• Jack Colletto, the quarterback-turned-linebacker, got some work at quarterback with the third string and also on the goal-line packages to start the scrimmage. He scored a couple times running the ball in on those short-yardage plays.

Gebbia called Colletto a spark plug and Smith said the players get energized when he s in there.

• The kickoff and punt return teams had some success, with Champ Flemings, Jesiah Irish and Tyjon Lindsey ripping off long returns.

• Gus Lavaka left with an ankle injury late but Smith said he didn't think it was a long-term injury.

OSU football: Choukair not listening to outside noise

Before fall camp began, Jordan Choukair decided once and for all he was going to delete Twitter.

Isaiah Hodgins and Trevon Bradford have been close since Hodgins arrived in Corvallis as a true freshman in 2017.

With Noah Togiai only able to play in five games last season and a young and inexperienced group, there wasn’t much production out of the tigh…

Jesiah Irish has always been an intriguing prospect for Oregon State, and his accomplishments in the spring only raised his profile.

OSU football: Hicks-Onu more than ready to be back on the field

It’s been a long road back to the football field for Oregon State's Omar-Hicks-Onu after an ACL injury took away his 2018 football season.

Oregon State running back Ta'Ron Madison is brought down by teammates during Saturday's scrimmage. The defense didn't allow many big plays in the run game.

Despite moving to linebacker, Jack Colletto got some reps with the third-string offense and on the goal line in Saturday's scrimmage.