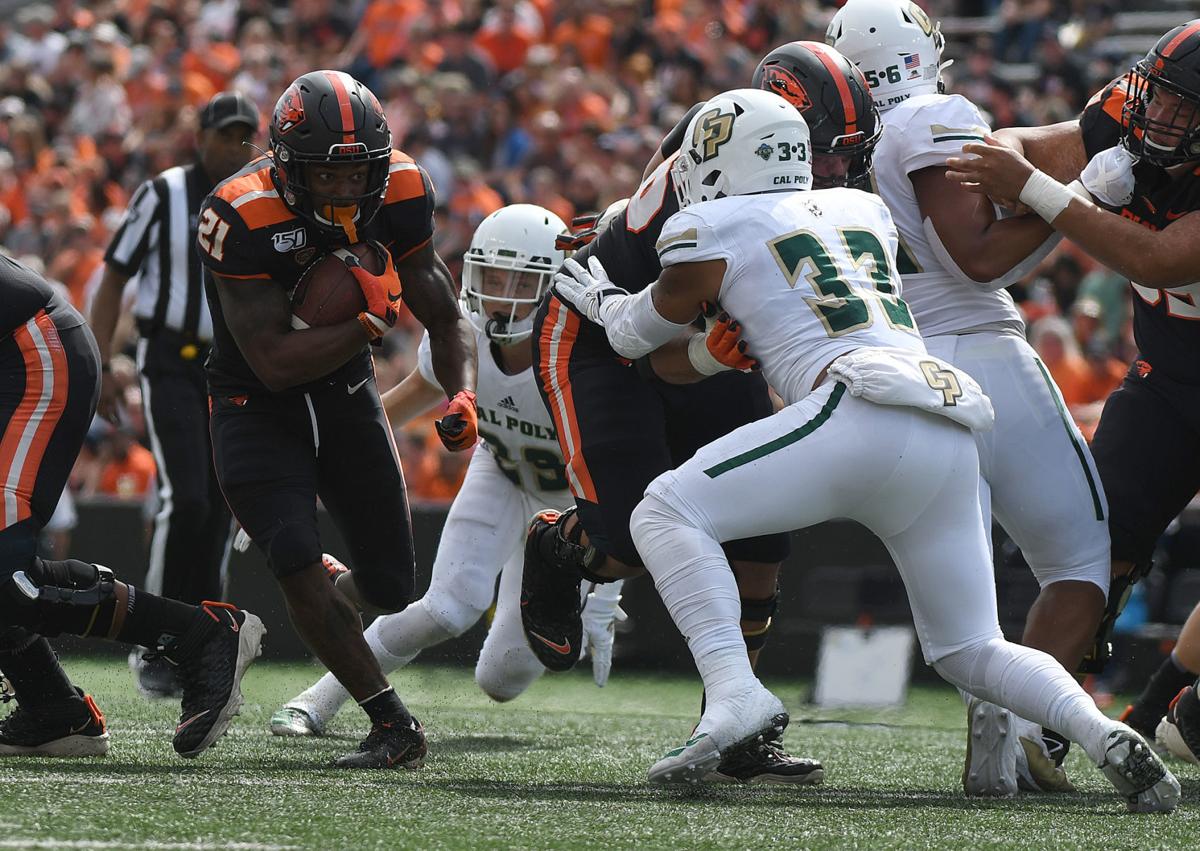 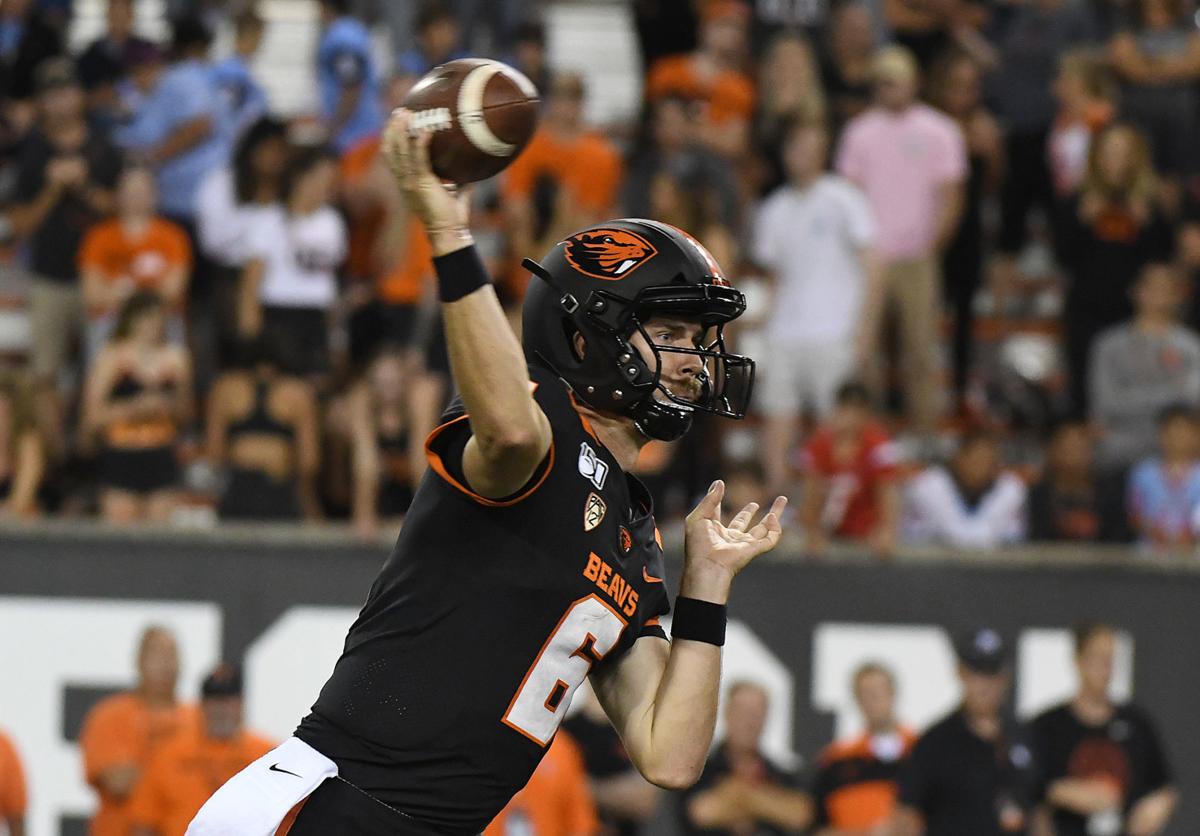 Oregon State quarterback Jake Luton has completed 55 of 96 passes for 675 yards with eight touchdowns and no interceptions.

Oregon State offensive coordinator Brian Lindgren said this past week that he is pleased with the many “good things” he can take from the Beavers’ offensive output over the first three games of the season.

But like all coaches say, “there’s a lot of things we need to improve on,” he added.

The Beavers have made that balance pay off to the tune of 36.3 points per game as they had a chance to regroup during this bye week in preparation for Saturday’s Pac-12 opener against Stanford at 4 p.m. inside Reser Stadium.

“I think we’ve just grown in every facet of it,” sixth-year quarterback Jake Luton said. “It’s just kind of another year in the system, we’re all more comfortable, we can kind of take more control.

“As a quarterback, I have a lot more knowledge in it and I can see things so it’s not so heavily on Lindgren to be able to see things pre-snap. So we can kind of get out there and make things happen on the fly. Then receivers all feel comfortable with it, the O-line has improved so much and I think that also has something to do with it.”

The offensive line has been a bright spot, allowing just two sacks through the first three games. That number was 48 last season.

Both sacks, Lindgren said, fall on the quarterback. Luton agreed.

“I thought the protection was fine and there was kind of a coverage sack where we held on to the ball too long or made a poor decision and would take a sack,” Lindgren said. “I think that first group has played pretty solid. I think there’s still room for growth. I think we just need to continue to build depth at that position so this (past week was) good for some of those backup guys to continue to take more reps and be ready to go because we’re going to need them as the season goes on.”

Senior left tackle Blake Brandel, much like a coach, is pleased but not satisfied with the line’s performance.

“We haven’t done what we want to do yet,” he said. “I think we’ve done some good things, I think we’ve done some bad things, and the nice thing about having a bye week right now is you can go back and rewatch those three games and kind of learn from what mistakes we’ve made and how to improve on that. I think this bye week is really going to help take that next step.”

As for the low sack numbers, while his OC and quarterback put the blame on the QB, Brandel knows his quarterback has also helped the line out at times.

“Me personally, I have given up a couple pressures and Jake’s been back there and he’s made the right move, whatever you want to call it, gotten the ball out,” Brandel said. “I think it’s definitely an improvement but like I said we’re not where we want to be yet. I think it’s a good start.”

Luton has completed 55 of 96 passes for 675 yards with eight touchdowns and no interceptions. That equates to an efficiency rating of 143.85 (60th in Division I).

Eight different receivers have caught a pass, but Isaiah Hodgins by far has been Luton’s favorite target. The junior has 23 receptions for 347 yards (15.1 per catch) and five touchdowns. Tyjon Lindsey has nine for 50 yards and a score through two games and Noah Togiai is next with eight for 56.

“We feel really good with Hodgins, he’s been doing a nice job through the first three weeks,” Lindgren said. “Champ Flemings (5 for 142 against Cal Poly with two scores) has been a guy that has come on. I thought he ran with it (bigger role last Saturday), did some nice things, made some nice plays.

“Hopefully we can get Tyjon back and Trevon (Bradford) but I think those other guys just need to keep coming along.”

The Beavers have also been solid in the run game no matter who is carrying the ball.

Jermar Jefferson, who missed the Cal Poly game with a foot injury, has 270 yards on 47 attempts while Artavis Pierce has added 222 yards on 27 rushes.

“Both guys have the ability to create explosive plays,” Lindren said. “I think AP’s a little bit more of a downhill runner and I think he gets vertical a little quicker than Jermar.

“Sometimes Jermar likes to be a little more patient at the line of scrimmage and see things but both have their strengths and I think it sits in good that defenses have to tackle two different types of backs.”

B.J. Baylor had a big game against Cal Poly and has 114 yards through three games to provide another weapon in the ground game.

“We’ve been excited about B.J. Baylor since spring and I was pleased that everybody was able to see that because he’s been a pretty consistent practice player for us and we’re really excited to have him in the program,” Lindgren said. “It was good to see him break a couple long runs and have a good day.”

While the offense has been efficient, there were a couple lulls in the first two games that proved costly in eventual losses.

“I think we need to execute at a higher level more often,” Lindgren said. “I think that got us in trouble at times in the Oklahoma State game and then in the second half of the Hawaii game and that’s something that we’re focusing on this week.”

Oregon State’s win against Cal Poly was big for the Beavers and the football program as a whole.

Coming off a dominating 45-7 victory over Cal Poly, having a bye week may seem like it has come at a bad time for the Oregon State football team.

Late in the first half of Oregon State’s football game against Cal Poly last Saturday, Jake Luton saw Champ Flemings racing down the center of…

Oregon State had a long list of the walking wounded for last Saturday’s game against Cal Poly, and those players who missed the game did so be…

While Cal Poly is nowhere close to the caliber of team Oregon State will face the rest of the football season, Saturday’s 45-7 thumping of the…

OSU football: Defense has some confidence after three games

There’s no doubt there has been some improvement made by the Oregon State football team's defense from a season ago.

Since taking a 17-3 lead at USC early in the second quarter three games ago, not much has gone right for the Stanford football team.

OSU football: Beavers could find success through the air against Stanford

If there was any concern about a bye week slowing down the Oregon State football team’s momentum coming off its first win of the season, that …

Oregon State quarterback Jake Luton has completed 55 of 96 passes for 675 yards with eight touchdowns and no interceptions.