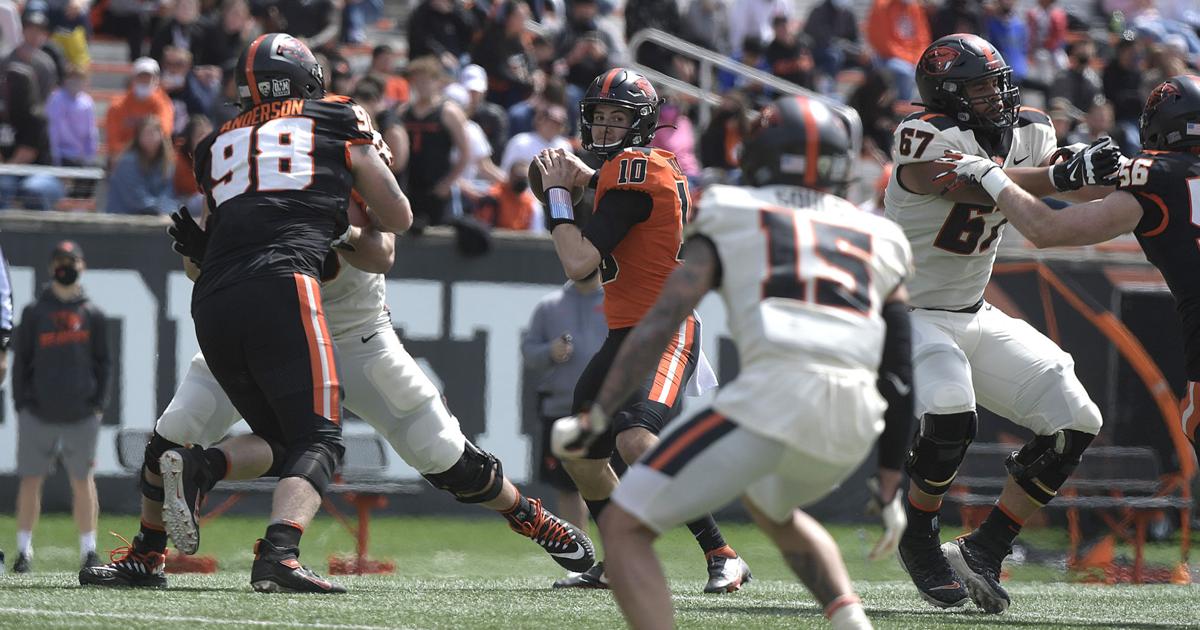 Chance Nolan (10) drops back to pass in Oregon State's spring game last April. Nolan was praised Tuesday by Beavers coach Jonathan Smith for his body of work in fall camp. 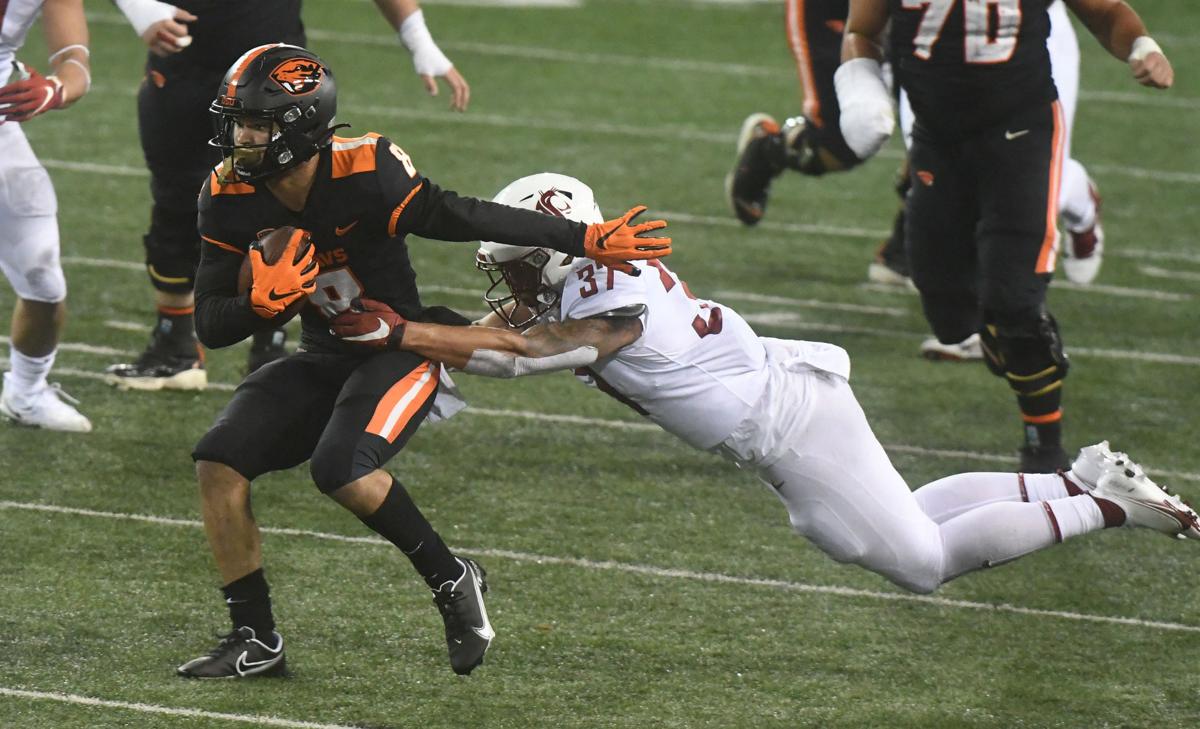 Oregon State's Trevon Bradford tries to escape the tackle of Washington State's Justus Rogers in a 2020 game. Beavers coach Jonathan Smith said Bradford could play every snap because of his ability to play multiple positions.

It appears a decision on who will start at quarterback for Oregon State in the season opener at Purdue two Saturdays from now could be put off until game week.

One of the primary candidates for the spot, Tristan Gebbia, who started the first four games for the Beavers last season, has been sidelined at practice since last week with a sore hamstring. How long he’ll be out is still uncertain.

“We talked about Tristan, giving him a couple days to try to get that thing feeling better and he’s still yet to do in regards to feeling like he can go full speed,” Smith said Tuesday as he met with the media after practice, the team’s 16th of fall camp. “He’s getting a little light work, but we’re really taking that day to day. He’s not ready for prime time, so we’ve got to work with those other guys.”

Those others are graduate transfer Sam Noyer, Chance Nolan, a second-year player in the program who played in relief of Gebbia in 2020, and true freshman Sam Vidlak.

Smith said he doesn’t want to be locked into a date to make the pick. He added that he’s not trying to play games and that for the first time in his fourth season as OSU’s head coach a starting quarterback may not be named until the week of the first game.

“I like the reps and the guy knows that he’s going to play and he can prepare that way,” Smith said.

“Chance has done some really good things the last couple of days and gotten really himself in the thick of that conversation,” Smith said.

Smith reiterated his thoughts from earlier in camp that when it came time to choosing a starter, the entirety of the fall practices will be used to make that decision.

He pointed to that statement Tuesday and what Nolan has done and said, “it’s pretty good.”

Rattling off the positives he’s seen from Nolan, Smith said he likes how the ball comes off his hands, his decision making and lack of turnovers, checking protections and creating plays outside the pocket.

Oregon State’s wide receiver unit has proven to be a deep group and one that could be a strength for the Beavers.

Trevon Bradford can play every down because his ability to play multiple positions, Smith said. Zeriah Beason is a pass catcher that OSU “can count on in a big way,” the coach added, and Tre’Shaun Harrison and Tyjon Lindsey have both been productive in fall camp.

Makiya Tongue brings physicality as a big receiver and Jesiah Irish, who has returned to the offensive side and short stint with the defense, provides top-end speed on the outside. Lindsey and Tongue are credited for their blocking skills.

“So you’ve got a lot of guys we trust,” said Smith, who was then reminded about others such as Anthony Gould, Champ Flemings and Silas Bolden.

The depth has the coach believing that the Beavers could put three receivers on the field for one play and three different players for the next snap.

Oregon State’s secondary is deep as well, and that’s created some strong competition throughout fall camp.

“I think it’s made them better, both sides,” Smith said. “Going good on good all the time has made both groups play at a high level.”

Because of the added depth and experience on the roster this season, Smith says fall camp has been competitive and productive.

“I do feel good about the work. We’ve got a bunch of details to tighten up” in all phases and need to figure out depth chart, Smith said, adding that he plans to take advantage of every day leading up to the Sept. 4 game at Purdue. “I think guys have been taking care of each other. We’re going full speed, but when it’s not live tempo they’ve done good in regards to that.”

Jim Michalczik chuckled to himself as he thought about the experience returning this season and the depth along the offensive line he mentors.

OSU football: Adams' tough love aims to get the most out of his players

Blue Adams doses out tough love to the Oregon State secondary he oversees, barking both instructions and criticism when he finds it necessary.

The Oregon State volleyball team opened its season with a five-set victory over Oklahoma on Friday night at the Oklahoma Invitational.

Oregon State has landed on Sam Noyer as its starting quarterback for Saturday’s football season opener at Purdue.

Quarterback Sam Noyer was a bit behind the curve when he decided to transfer from Colorado to Oregon State back in June.

Oregon State has picked its starting quarterback for Saturday night’s football home opener against Hawaii, but you might have to wait until ki…

Although it came against a lower-division opponent, Hawaii showed an ability to score some points in last week’s 49-35 home win against Portla…

Oregon State came flying out of the gates Saturday night, an effort that escaped the Beavers in their season-opening loss at Purdue.

Chance Nolan (10) drops back to pass in Oregon State's spring game last April. Nolan was praised Tuesday by Beavers coach Jonathan Smith for his body of work in fall camp.

Oregon State's Trevon Bradford tries to escape the tackle of Washington State's Justus Rogers in a 2020 game. Beavers coach Jonathan Smith said Bradford could play every snap because of his ability to play multiple positions.