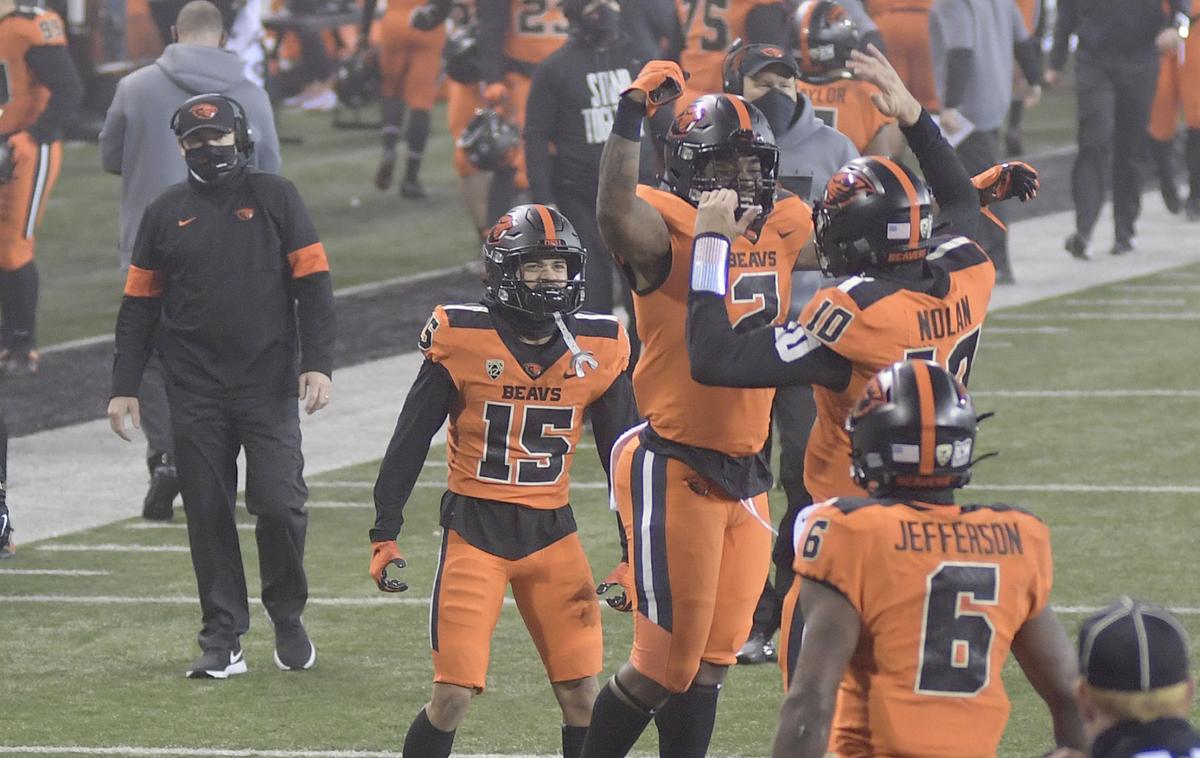 Oregon Head Coach Jonathan Smith watches as teammates join quarterback Chance Nolan (10) celebrating his game-winning touchdown run. The victory over Oregon was a signature with for Smith and the Beavers. 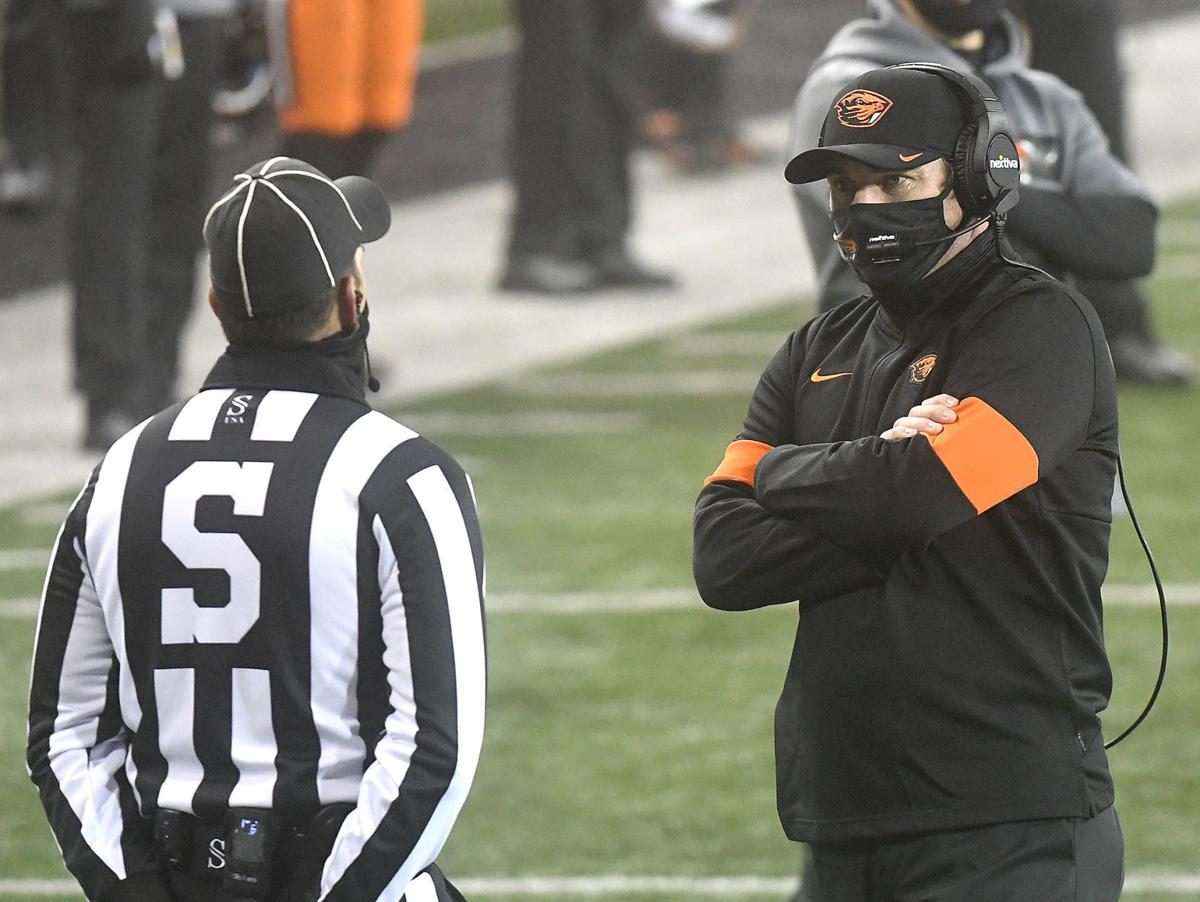 Smith talks with side judge JB Garza during the series of plays at the goal line on Oregon State's final drive.

It would have been so simple for the Beavers to let this season go off the rails.

A poor performance against Washington State and a botched call at Washington in its first two games left Oregon State in an 0-2 hole to start the year and seemingly without much hope of the season going into a major upswing.

That pair of early losses could have sent the Beavers’ 2020 campaign into a spiral. Instead, they came out the other side a better team and are now playing their best football in a long, long time.

Friday was a signature win for Oregon State coach Jonathan Smith, and a reminder that even though the results are still inconsistent at times, his team is trending in a really good direction.

“I think it’s huge,” Smith said afterward. “This is a good football team we played. Those guys have won a bunch of games over the last few years. Anytime there’s a rivalry game, you want to make it a rivalry. Getting on top, it does a lot for the program.”

The Beavers’ win Friday was their first over Oregon since 2016, when they bullied their way through the Ducks and ran Mark Helfrich out of Eugene. It was the first win against a good Oregon team since 2007.

The rivalry has been lopsided for the better part of a decade. But if Oregon State’s performance Friday is any indicator, it might be a lot more interesting in the near future.

Oregon coach Mario Cristobal and his staff are recruiting as well as any staff in the country and building a potential powerhouse in Eugene. And yet, the Beavers went punch-for-punch with the Ducks and their stable of blue chip recruits.

Look no further than Jaydon Grant as an example for why that was possible. Grant flipped his commitment from Oregon to Oregon State late in the 2016 recruiting cycle — before Smith had taken over as head coach — and arrived in Corvallis as a preferred walk-on.

Since then, he has blossomed into one of the premiere defensive backs in the Pac-12. On Friday, he came through with a crucial interception in the first half. Oregon State’s roster is littered with players like Grant, who didn’t receive much hype when they committed to the Beavers but have since bought into what Smith is selling and become key contributors.

“I guess the only thing I can do is thank God for leading me to decide to take a chance on myself and become a Beaver,” Grant said.

Corvallis was buzzing Friday night — or as much as a town can buzz in 2020, at least — after the win. Shortly after the Beavers’ rollicking celebration on the Reser Stadium turf ended, fans wanted to soak in the moment however they could.

So they flocked to campus by the dozen to lend their support. They never left their cars, and instead created a makeshift parade and laid on their horns as they drove by the stadium.

Even on a night when they couldn’t be in the stands, Oregon State supporters wanted to be a part of what Smith has helped create. It was hard to imagine a moment like that at this time last year.

“It means a ton. I told the team afterward in the locker room that this means a ton to a lot of people, not just the guys sitting in there,” Smith said. “It’s too bad that Beaver Nation couldn’t have been filled in Reser Stadium right now with a win like this. The celebration that would have taken place — we miss them so much. Because it means a lot to so many… For them to be victorious is huge.”

Even in his wildest dreams, Chance Nolan could not have come up with that ending.

All his life, Jermar Jefferson has played with a chip on his shoulder.

It sounds as though Tristan Gebbia’s status is in doubt for the Beavers’ upcoming game against Utah on Saturday night.

OSU football: Beavers' matchup with Stanford will be played in Corvallis

Oregon State has gained another home football game for the 2020 season.

Oregon Head Coach Jonathan Smith watches as teammates join quarterback Chance Nolan (10) celebrating his game-winning touchdown run. The victory over Oregon was a signature with for Smith and the Beavers.

Smith talks with side judge JB Garza during the series of plays at the goal line on Oregon State's final drive.