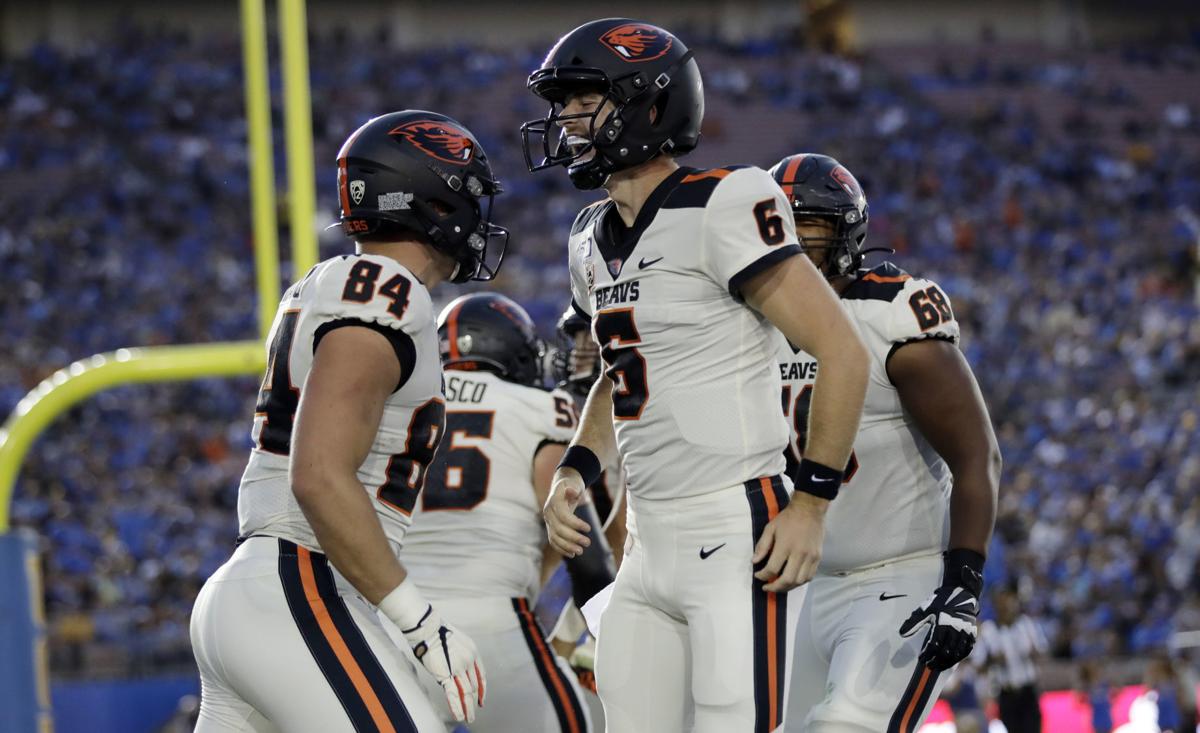 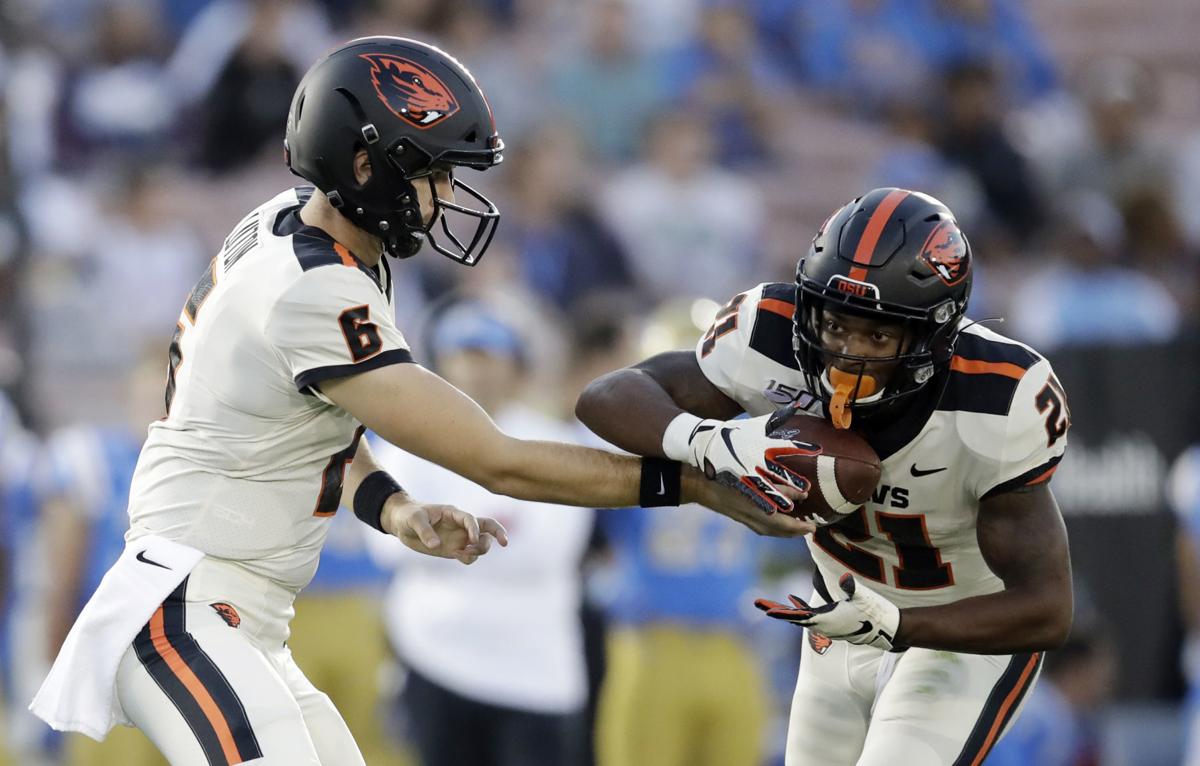 Oregon State running back Artavis Pierce, right, rushed for 119 yards and a touchdown for the Beavers. 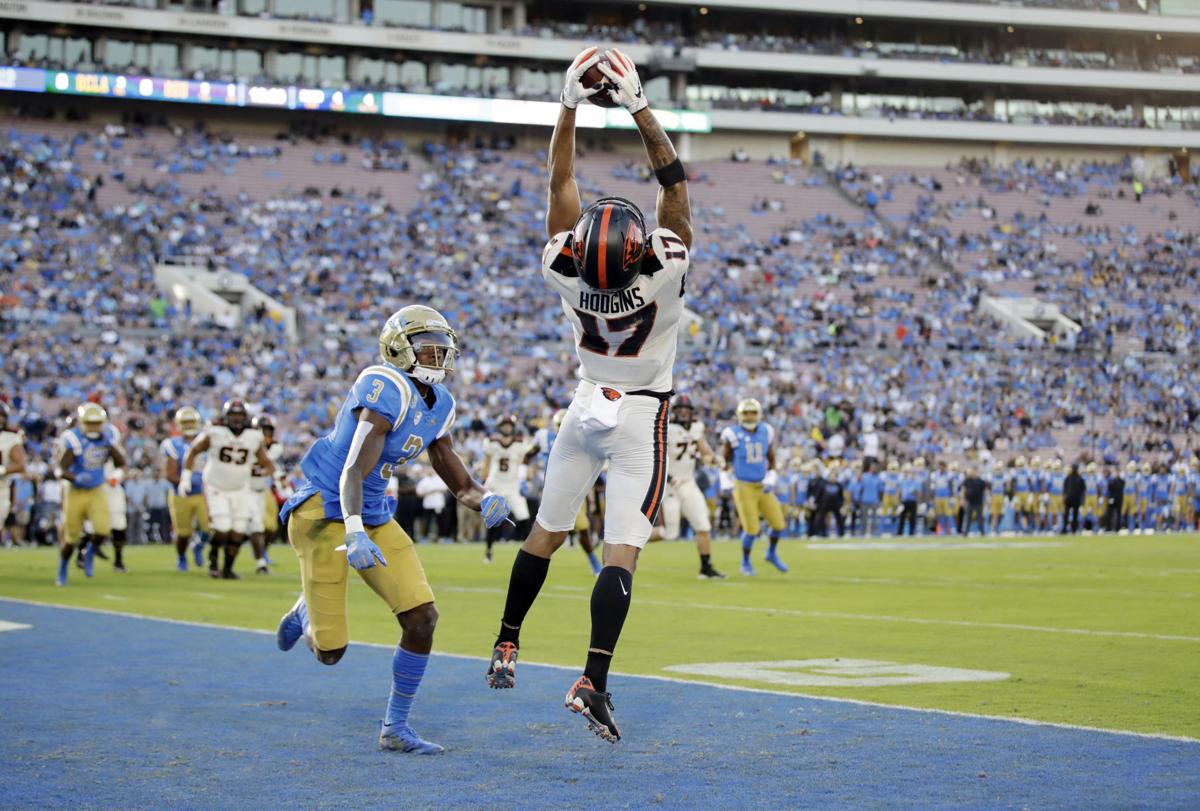 Oregon State wide receiver Isaiah Hodgins (17) grabs the first of his two first-half touchdowns. He had three on the day and 10 receptions for 123 yards.

PASADENA, Calif. — When Jake Luton took off on a quarterback keeper and scampered 19 yards for his sixth touchdown of the game, it set off a celebration on the Oregon State sideline.

That score was the final nail in the coffin for the Beavers, who finally put together a complete game and were rewarded with a 48-31 win over UCLA on Saturday night at the Rose Bowl.

Luton played one of the best games of his career, completing 18 of 26 passes for 285 yards and five touchdowns while rushing five times for 19 yards and another score.

“I think we played really good ball all year and we’ve been really close to putting it together so to come out against a quality team like UCLA and put a complete four quarters together was huge,” Luton said.

“He was great and that’s everything he’s deserved,” Isaiah Hodgins said of his quarterback. “He’s had a great season so far and he’s kind of tuned out any negative feedback or energy that people have given him, he’s just a consistent leader for our team.”

Hodgins had 10 more catches for 123 yards and caught three of Luton’s touchdowns. Tyjon Lindsey and Teagan Quitoriano had the other two.

Artavis Pierce had a second-straight 100-yard rushing game with 119 yards on 21 attempts and one score.

While the outcome was really never in doubt, for many there was probably a feeling of déjà vu in the second half.

After a strong first half that saw Oregon State bolt out to a 21-0 lead and a 27-10 edge at intermission, the second half didn’t start well and that had some thinking back to the Hawaii game.

That thought grew stronger when UCLA took the second half kickoff down for a touchdown and got a quick three-and-out defense.

But this was not Hawaii, nor last week against Stanford when the Beavers were shut out in the first half then rallied to tie it in the second half before losing by three.

Luton tossed a pair of third-quarter touchdowns and restored just enough order as the Beavers went on to knock off the Bruins for their first Pac-12 win of the season.

The momentum seemed to swing some in the second quarter despite the Beavers leading by 17 at the break. Thoughts of the Bruins’ rally from down 32 in the third quarter at Washington State two weeks early may have crept in for some fans.

But they need not worry on this night when the beavers had an answer for every UCLA rally.

“It got within 10 points and these guys continued to battle and continued to work and respond and answered some scores,” coach Jonathan Smith said. “Just really couldn’t be prouder of really all three phases.”

UCLA opened the second half with a touchdown play as Joshua Kelley capped the drive with a 1-yard run that involved a lengthy review with the ruling that he fumbled and recovered on the goal line.

The Beavers appeared to get a fumble but Burton was ruled down after a review. They did get a stop as Isaiah Dunn helped break up a fourth-down pass to give OSU the ball at its own 39 with 5:14 left in the third.

On third-and 2 from the 47, the Beavers appeared to line up to run but Lindsey got behind the defense and was wide open as he walked into the end zone for a 53-yard touchdown that restored order and put OSU up 34-17 with 4:30 left in the third.

The momentum was short-lived as Demetric Felton burst 75 yards for a score on UCLA’s next play to make it 34-24 with 4:18 left in the third.

Back came the Beavers. After picking up seven on fourth-and-6, Luton hit Hodgins on a double move for a 22-yard touchdown and 41-24 lead with 17 seconds left in the third.

But the Beavers responded with a 14-play, 75-yard drive that chewed up 6:57 off the clock and sealed the win.

The Beavers racked up 224 total yards in the first half on 29 plays as Luton was 8-for-13 passing for 123 yards and three touchdowns. Pierce had 10 rushes for 94 yards and a score and Hodgins caught five passes for 48 yards.

UCLA dominated the time of possession, holding the ball for 18:18 but managed only 183 yards of total offense on 41 plays. Burton was 16 for 21 for 99 yards and a score. Felton had six carries for 30 yards and added seven catches for 42 yards.

Oregon State took the opening kickoff 75 yards in seven plays with Luton connecting with Hodgins for a 4-yard score and a 7-0 lead 2:43 into the game.

Luton hit Kolby Taylor, who took it 45 yards to the 3 on third-and -2 to keep the drive alive. It’s the fourth time the Beavers have scored on their opening possession this season.

The Bruins went for it on fourth-and-1 at their own 34 and Hamilcar Rashed Jr. stopped Kelley for a loss of five.

After Luton hit Hodgins for 12 yards for a big third-down conversion, Pierce put the Beavers up two scores with a 5-yard TD run. Just like that it was 14-0 with 9:11 left in the first quarter.

After an unsportsmanlike penalty on the touchdown run, the Beavers kicked off from the 50 and Daniel Rodriguez’s dropkick bounced before David Morris recovered at the UCLA 28.

That was a play the Beavers had been practicing for a few weeks.

“We always thought if we kicked off from the 50 we were going to try that because chances are you’re going to kick it out of the end zone,” Smith said. “The amount of yards you’re going to lose is not that much. So yeah, D-Rod put a great kick on it and David Morris came up with it.”

Luton hit Quitoriano on the first play for the touchdown and a 21-0 lead with 8:59 left in the quarter. It was Quitoriano’s first catch of the season and first career touchdown.

Luton was 6 for 8 in the first quarter for 115 yards and two touchdowns and the beavers piled up 149 total yards to 73 for UCLA.

The Bruins finally got on the board in the second quarter as Burton hit Kyle Phillips from 7 yards out to make it 21-7. UCLA had to work for the touchdown as the Bruins needed 13 plays to go 85 yards and chewed up 7:43 off the clock.

The Beavers immediately answered as a 53-yard run by Pierce flipped the field and Luton ultimately found Hodgins for a 5-yard score and a 27-7 lead after the PAT was no good. The Beavers went 75 yards in nine plays and used 3:49 off the clock.

Whetzel not on roster

Junior defensive back Kee Whetzel is no longer listed on the Oregon State roster.

Whetzel had not played this season and had not been with the program for some time.

He took to Twitter a few weeks back to address his absence.

“I’m going through a situation where the football portion of my life could be put on pause,” he wrote. “… Hopefully I will be back sooner rather than later but at this time it’s really up in the air.”

Jack Colletto, who has played in the first four games at inside linebacker and quarterback, will redshirt this season. Colletto said that was the plan at the start of the season.

However, that could change depending on injuries to other players.

Colletto had three total tackles and rushed six times for 10 yards and one score in short-yardage packages.

Nick Moore will now be the third-string quarterback.

OSU football: Beavers never let up after big lead in win over UCLA

PASADENA, Calif. — It would have been natural for the Oregon State football team to have a bit of a letdown after jumping out to a 21-0 lead s…

When opposing coaches think about slowing down Oregon State’s passing attack, the first name that comes to mind is most likely Isaiah Hodgins.

OSU football: Beavers face a Utes team that can run the ball and stop the run

Oregon State’s offensive line and defensive front seven have shown plenty of improvement over the past season.

OSU football: Beavers look to carry over momentum into battle with No. 15 Utah

Even up 17 points in the closing seconds, the Oregon State defense did not want to allow any more points to UCLA last Saturday night.

Oregon State running back Artavis Pierce, right, rushed for 119 yards and a touchdown for the Beavers.

Oregon State wide receiver Isaiah Hodgins (17) grabs the first of his two first-half touchdowns. He had three on the day and 10 receptions for 123 yards.