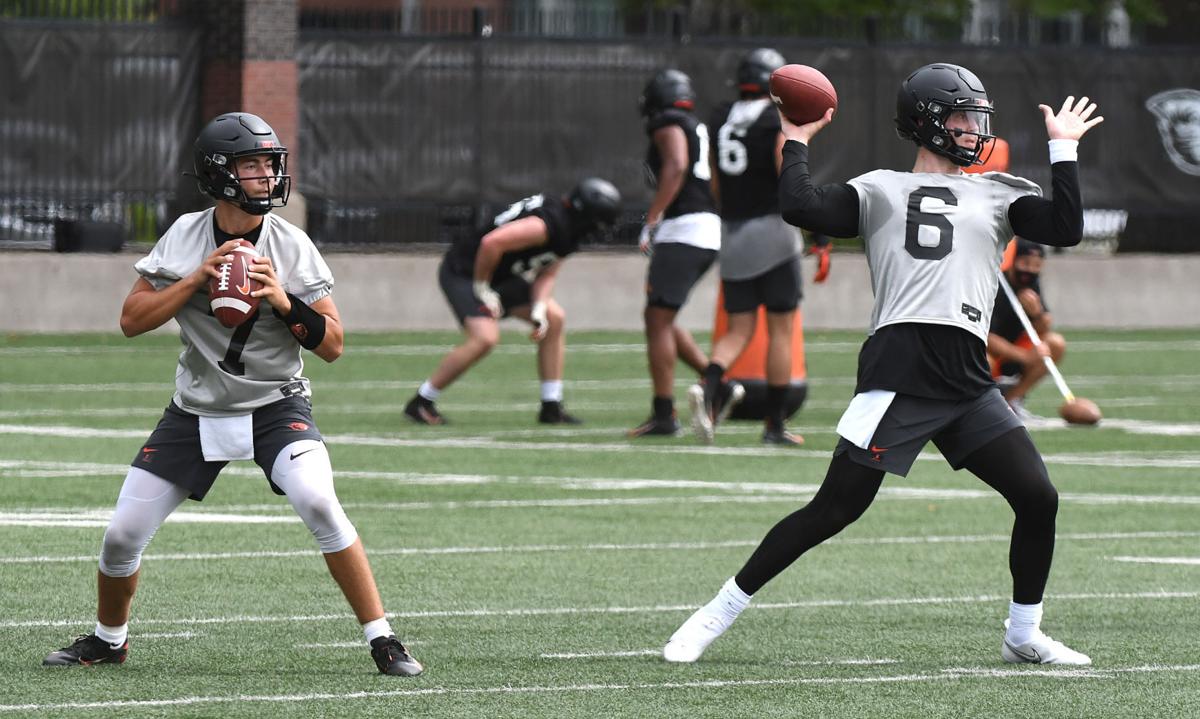 Sam Vidlak (7) and Sam Noyer are two of seven quarterbacks on the Oregon State roster. Vidlak, a true freshman, and Noyer, a graduate transfer from Colorado, are both in their first year in the program. 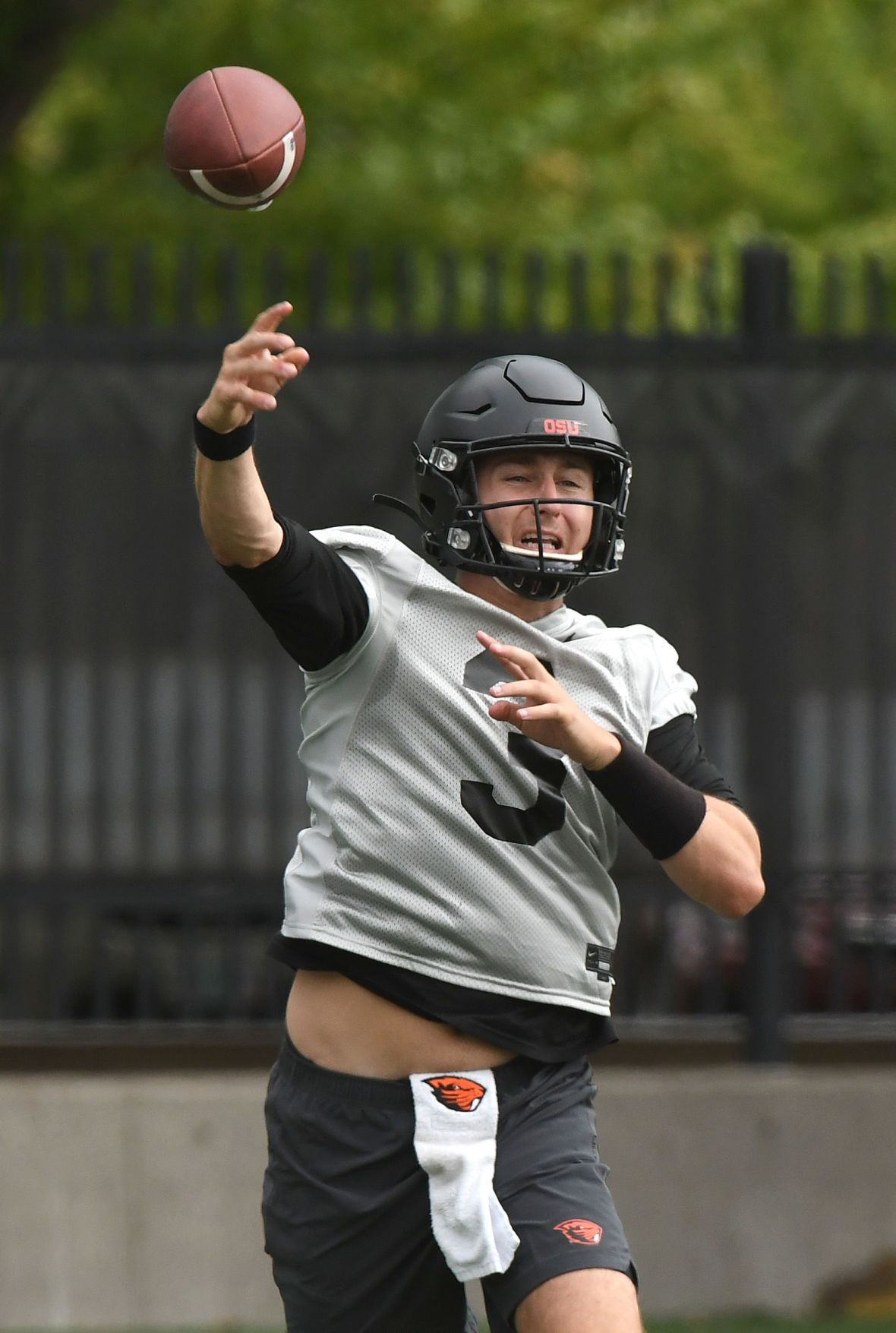 Oregon State quarterback Tristan Gebbia is back on the field after a serious hamstring injury in 2020. 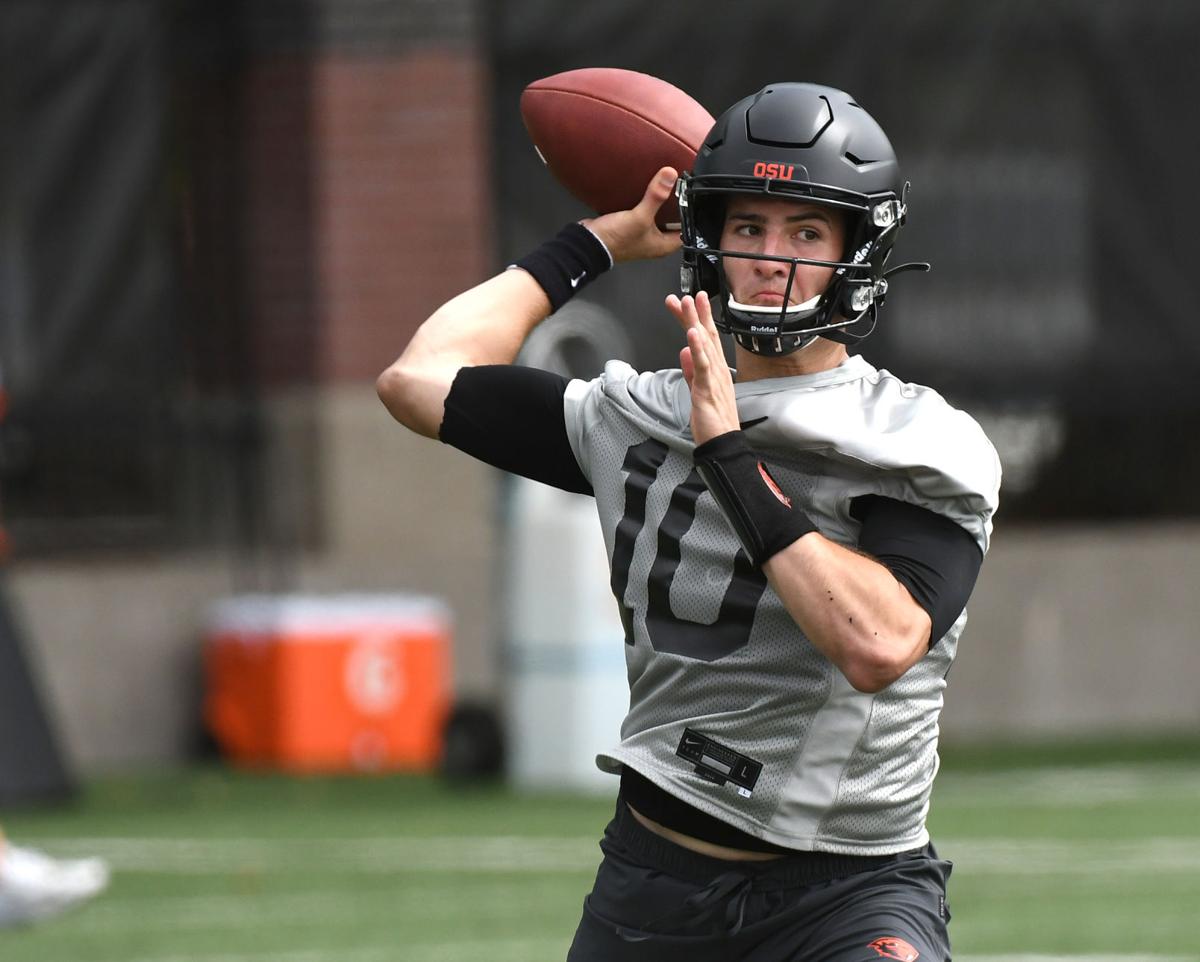 What is expected to be a competitive battle for Oregon State’s starting quarterback position continued Friday as the Beavers opened fall camp.

Tristan Gebbia, Chance Nolan, Sam Noyer and Ben Gulbranson all have major college experience. Gebbia is in his third year in the program and Nolan his second, and Noyer is a first-year transfer after three years at Colorado.

OSU has three other QBs on the roster in freshmen Jake Blair, Brady Huchingson and Sam Vidlak.

When it comes to picking a starter for the Sept. 4 season-opener at Purdue, Beavers coach Jonathan Smith laid out the factors that will be in play.

“It’s going to be a body of work, but ultimately the guy who gives us the best chance to score,” Smith said after Friday’s practice. “Eliminate or avoid errors, negative plays. So these guys will get a long run of showing what they can do.”

Gebbia, a redshirt junior, has played in eight games for Oregon State and started five over the past two seasons. A redshirt sophomore, Nolan started the final three games last season after Gebbia was sidelined with a hamstring injury that required surgery.

Gulbranson, who threw nine passes in the 2020 finale against Arizona State, is sidelined with a shoulder injury.

Noyer, a Beaverton High School alum, is a grad transfer with one year of eligibility remaining. Vidlak, who just graduated from Hidden Valley High in Grants Pass, joined the program in time to participate in spring practice.

Gebbia had no restrictions in Friday’s practice and appeared to be close to full strength.

“He moved around. He had a great summer, building to this point. He’ll continue to get stronger and faster. But I thought he looked sharp and it was nice to see,” Smith said. “It looks like he’s recovered really well. He’s confident. He knows this scheme pretty well.”

The coach added that Noyer, listed at 6-foot-4 and 227 pounds, showed off his athleticism and had “good energy to him." Smith said he could tell the newcomer had been studying the playbook. Noyer, a second-team all-Pac-12 selection by the conference’s coaches last fall, announced his transfer in June.

Smith said he liked what he saw from his team in its opening practice. There was good energy, players having fun and showing that they were prepared.

“I think what stood out is the strength, the explosiveness and the body types all of a sudden have changed,” he said. “You can tell them put some work in in the summer.”

The coach added that it becomes obvious early in fall camp who has really put in the time to improve their bodies and become better overall players.

“You’ll learn after a few days, but even just seeing them today you can see guys that made some huge strides, which was impressive to see,” the coach said.

Smith said attacking offseason weight room workouts is important, but also that preparation goes beyond that.

“It’s a physical game. Their bodies are a huge part of their game,” he said. “So these guys put in some work, and it’s not just the weight room. It’s how they’re eating, how they’re hydrating, how they’re sleeping and you can tell that this group is dedicating to doing it.”

The objectives for fall camp, Smith said, include learning the scheme. Shoulder pads go on Monday for the team’s third practice, which will ramp up the intensity.

At 6-2 and 223, Makiya Tongue stuck out when standing among his fellow wide receivers Friday.

“He’s physical. It’s exciting to see him out there,” Smith said, adding that Tongue missed a majority of the spring practices but will be counted on to play receiver and contribute on special teams.

Tongue played in three games in Georgia in 2019 before transferring to Oregon State.

Redshirt junior safety Jaydon Grant, who has played in 32 games over the past four seasons, was limited in Friday’s practice as a precautionary measure.

“Being smart with him,” he said. “It doesn’t feel quite right on his lower leg. Nothing major.”

Andrzej Hughes-Murray calls his decision to return to Oregon State for a sixth football season a “no-brainer.”

Experience, chemistry, no shortage of leaders and the potential impact of newcomers all have coach Jonathan Smith and his players confident an…

Prep wrestling: Steve Thorpe recognized for contributions to the sport

Sam Vidlak (7) and Sam Noyer are two of seven quarterbacks on the Oregon State roster. Vidlak, a true freshman, and Noyer, a graduate transfer from Colorado, are both in their first year in the program.

Oregon State quarterback Tristan Gebbia is back on the field after a serious hamstring injury in 2020.