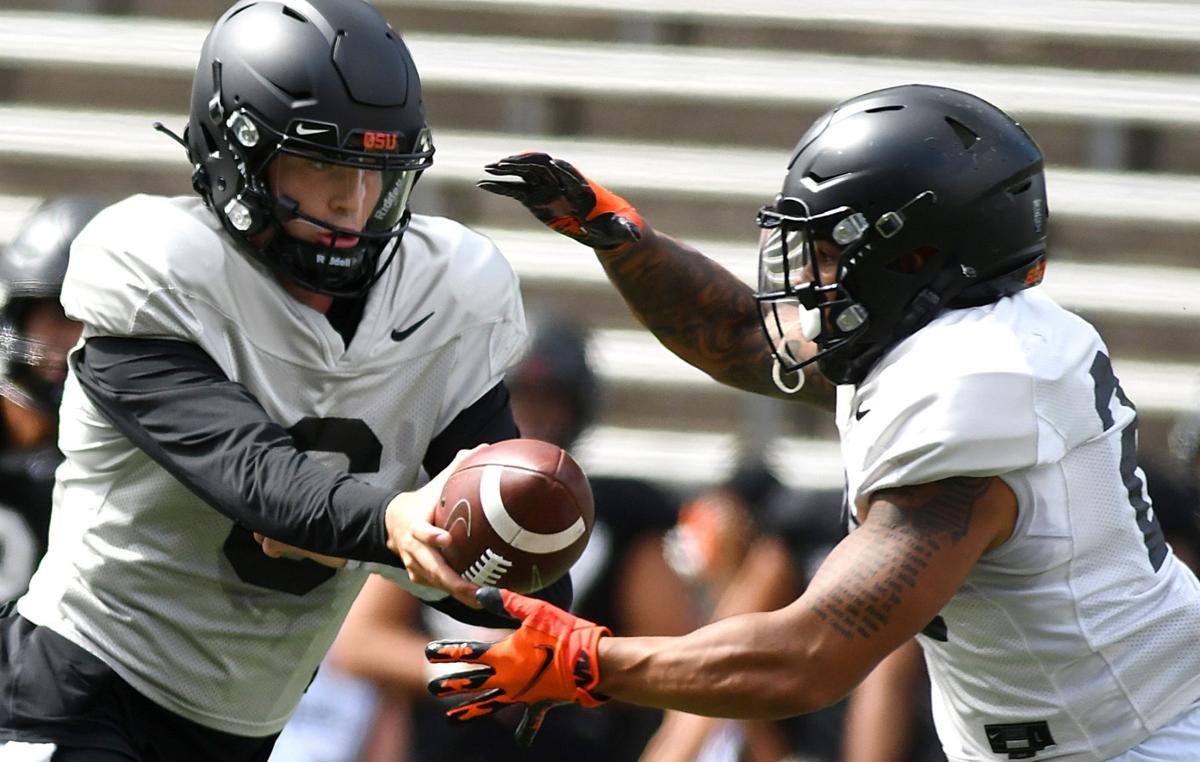 Sam Noyer hands the ball off to running back Trey Lowe during a fall camp scrimmage. Noyer, a graduate transfer, was named Oregon State's starter at quarterback for Saturday's season opener at Purdue. 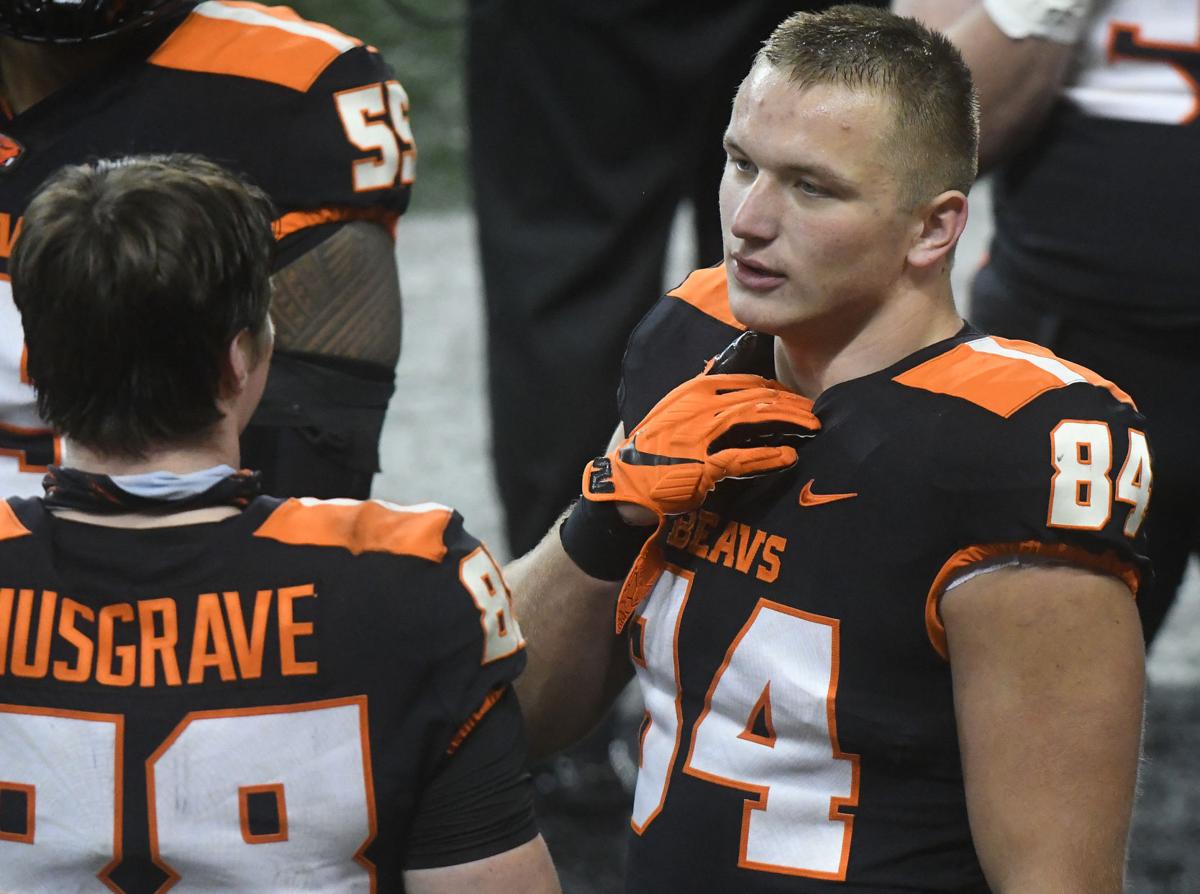 Despite limited time in Oregon State's fall camp, tight end Teagan Quitoriano (84) is expected to be ready for Saturday's season opener at Purdue.

Oregon State has landed on Sam Noyer as its starting quarterback for Saturday’s football season opener at Purdue.

The Beaverton High product and graduate transfer from Colorado was on top of the depth chart released Monday.

“Throughout camp I thought the whole quarterback room did a good job back and forth. It was very close,” coach Jonathan Smith said during a press conference. “I think just the overall feel, the body of work through camp then headed into a game plan, those things, we just felt like (Noyer) has the best chance to let us score some points.”

Chance Nolan, a redshirt sophomore, will be the backup for the second straight season and true freshman Sam Vidlak is third on the depth chart. Redshirt junior Tristan Gebbia, who started the 2020 season at quarterback, remains limited in practice with a hamstring injury.

Smith said Gebbia could be back to a full participant in practice in another week or two.

“We want to give him time to get as close to healthy, 100%, as possible, and we feel like the best avenue is to continue to take it week by week, limit his reps to he can continue to heal,” the coach said.

“I like playing a bunch of different backs,” said Smith, the former OSU quarterback in his fourth year as the Beavers’ head coach. “When we get closer to game day this week even, we’ll see how that rotation plays out. But we do feel like we’ve got three guys that could start and carry the load.”

Smith said that ultimately the decision on who will start the game will come down to the first few plays that offensive coordinator Brian Lindgren wants to run.

“Those guys’ skill sets have some similarities, but there are some strengths that some guys have over the other,” Smith said. “You get into the game, first, second quarter, and we get a hot hand, I can see one guy kind of getting featured after that.”

Willing do to anything to help the team, Thomas Sio took a few snaps on defense last year despite playing on the offensive line since he arrived at Oregon State a year earlier.

The possibility of playing solely on defense became more serious during spring practices and the 6-foot-3, 347-pound Sio decided to make the move. Monday, he found himself on the Beavers’ depth chart at defensive tackle.

“Depending on Purdue and what group we throw out there, Sio’s earned that spot when we’re in base to be able to run out there for the first play,” Smith said.

Knowing after spring practices that he had the chance to play more, Sio changed his diet and lost 20 pounds. He got in better shape partially by eating smaller portions more frequently during the day.

During fall camp, Sio said the mentality is the same on either side.

“Gritty trench work. It’s not for everybody,” is how he described it. “On both sides of the ball, better man wins, low man wins.”

If you’re not performing the correct technique, you’ll get exposed for it, Sio said. Teammates expose each other’s weaknesses and have each other get better.

He said switching sides of the ball, and learning what is required in technique and footwork, has been a big change for him. But he credits teammates such as Simon Sandberg, Alexander Skelton and Tavis Shippen for their mentorship.

“It’s something I had to work on the first couple days of camp,” Sio said. “I feel like I’m doing all right. I trust the guys to help me get to the right places.”

Smith said he could envision all nine receivers listed playing versus Purdue.

“The way we do things offensively, and putting some particular guys in some spots to have success, I can see a lot of receivers rotating,” the coach said.

Tight end Teagan Quitoriano, working toward full strength after an off-season foot injury, practiced more this weekend and the plan is to have him ready for Saturday’s game, Smith said. He’s listed as a starter at one of two tight end spots along with Luke Musgrave.

Cornerback Elijah Jones is “getting closer” to returning from injury, Smith said, and is listed as an either/or starter with Alex Austin.

Jones will remain limited in practice and his availability will be determined later in the week. That is the same situation for fellow first-year Beaver and defensive end Keonte Schad.

Jones played the past three seasons at Kansas and Schad the past two at Minnesota. Both seniors started their collegiate careers at Ellsworth Community College in Iowa.

Schad makes the depth chart as a third-string either/or at one of two end spots with Shippen.

RECORDS: Season opener for both

Jim Michalczik chuckled to himself as he thought about the experience returning this season and the depth along the offensive line he mentors.

OSU football: Adams' tough love aims to get the most out of his players

Blue Adams doses out tough love to the Oregon State secondary he oversees, barking both instructions and criticism when he finds it necessary.

Quarterback Sam Noyer was a bit behind the curve when he decided to transfer from Colorado to Oregon State back in June.

Trailing 16-7 late in the third quarter Saturday night at Purdue, Oregon State head coach Jonathan Smith decided it was time for a change.

Oregon State has picked its starting quarterback for Saturday night’s football home opener against Hawaii, but you might have to wait until ki…

Although it came against a lower-division opponent, Hawaii showed an ability to score some points in last week’s 49-35 home win against Portla…

Sam Noyer hands the ball off to running back Trey Lowe during a fall camp scrimmage. Noyer, a graduate transfer, was named Oregon State's starter at quarterback for Saturday's season opener at Purdue.

Despite limited time in Oregon State's fall camp, tight end Teagan Quitoriano (84) is expected to be ready for Saturday's season opener at Purdue.