OSU football: Rashed doesn't care about stats; he wants to win
Share this
{{featured_button_text}}
1 of 3 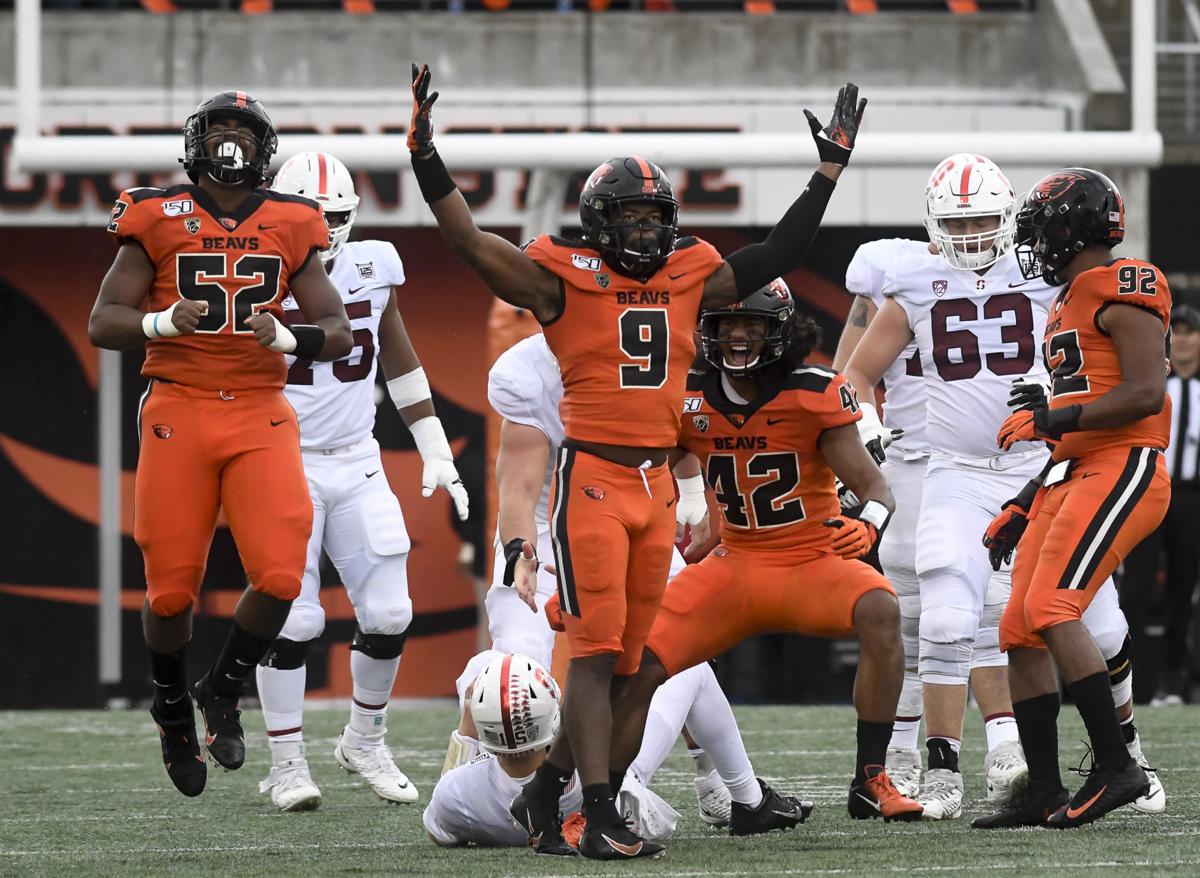 Oregon State's Hamilcar Rashed Jr. celebrates one of his two sacks in a 2019 game against Stanford. Rashed set single-season school records with 14 sacks and 22.5 tackles for loss. 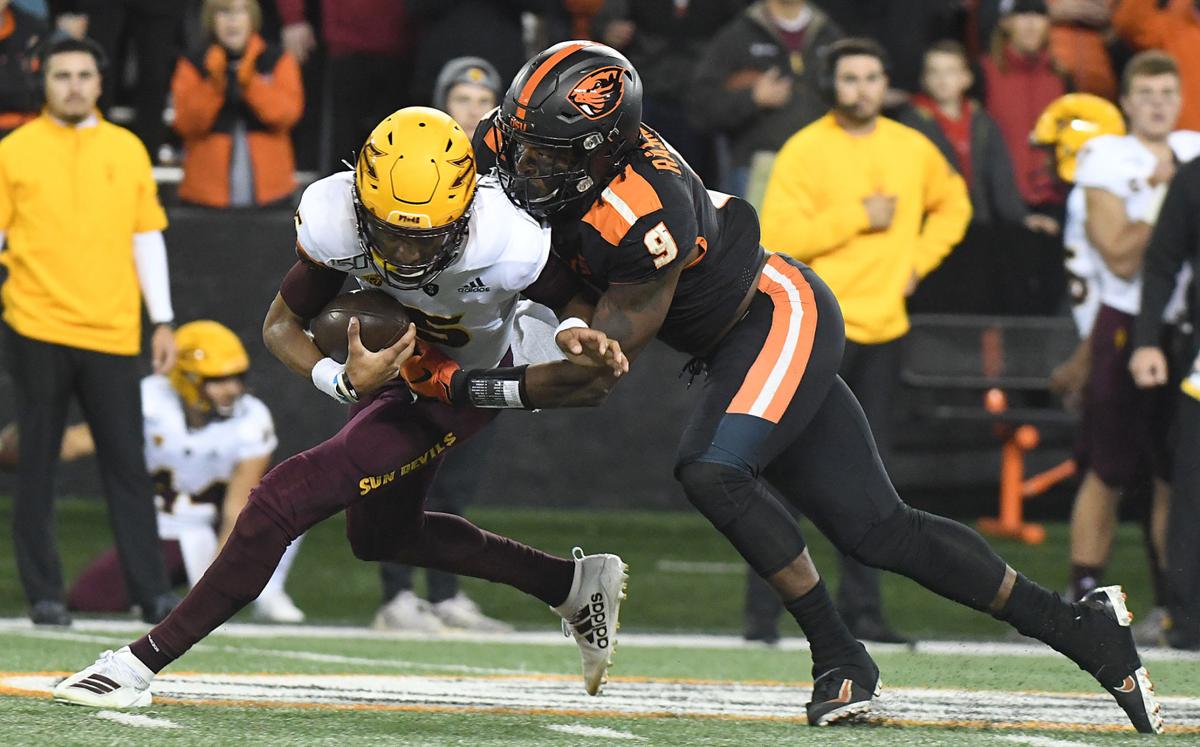 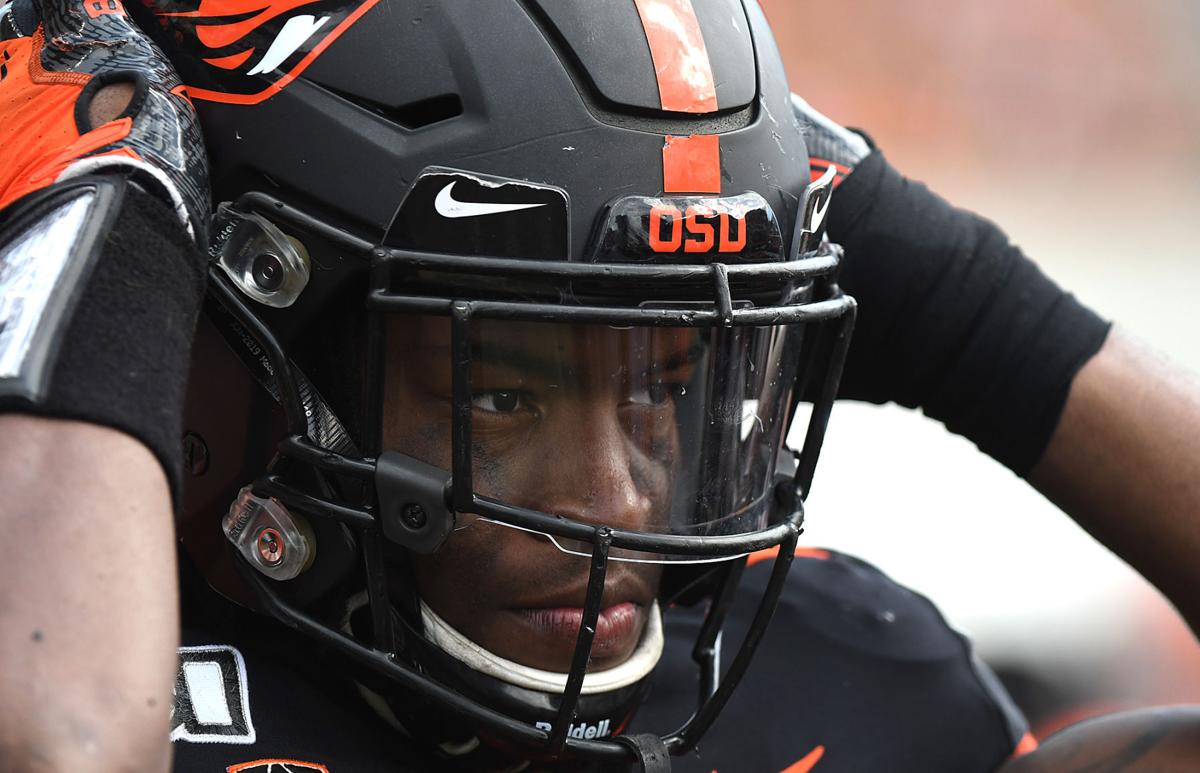 Oregon State outside linebacker Hamilcar Rashed Jr. wants to be a better leader and help the Beavers to a successful season.

Hamilcar Rashed Jr. put up lots of eye-catching defensive numbers in 2019, particularly quarterback sacks and other tackles for loss.

But those aren’t top of the mind for the standout outside linebacker as he enters his senior year at Oregon State.

He wants to win.

Despite a rebuilt offense that lost veterans at several key positions, the Beavers appear to have a breakthrough within reach this fall and chase the program’s first winning season since 2013 after going 5-7 last year.

The Beavers had nine of their 32 sacks of 2019, 14 tackles for loss in all, against the Golden Bears. Rashed and fellow linebacker Avery Roberts combined for 21 tackles, 15 as solo stops.

The Cal result was one that came after OSU allowed 31 or more points in five of their first six games, including 52 points twice. There were more defensive struggles to come, but the Beavers would later hold Washington and Oregon to 19 and 24 points, respectively.

His leadership usually comes in the form of action rather than words.

A fifth-year player in the program, Rashed describes his way as some of both most of the time, but he’d rather lead by example. He says it doesn’t matter how you lead, but if everyone around you is buying into it that’s the right way.

Teammate Isaac Hodgins has seen Rashed lead by example, putting in extra time in workouts and practices. He agrees with the assessment that it doesn’t matter how you lead, as long as you’re leading.

“I think Ham’s true nature is a little bit more a leader by example. He’s going to go and take care of his business and make sure that he’s playing at a really high level,” said Oregon State defensive coordinator Tim Tibesar, who specifically oversees the team’s outside linebackers. “But you’ve seen him grow over the last two years and be willing to say something when he feels it’s necessary. So that’s been a positive for him to be able to exert that leadership now as a veteran player for us.”

Rashed, who played at two different high schools in the Phoenix, Arizona, area, had his breakout season at Oregon State as a redshirt sophomore in 2017.

He finished with 52 tackles, fourth-best on the team. His 11.5 tackles for loss led the Beavers and were more than double the next-closest teammate. Among those TFLs were 2.5 sacks.

His 22.5 tackles for loss led the nation and set a new school record. Sixteen of those came in OSU’s five wins.

Rashed’s 14 sacks broke another all-time program mark, led the Pac-12 and tied for third nationally. He had at least one sack in seven games, including three versus California, and his 62 tackles were third on the team.

Rashed broke his left thumb against Arizona State late in the season. He didn’t play much in the final two games — in road games at Washington State and Oregon — because of the injury, and he believes that hurt his potential draft prospects.

Receiving feedback after the season, he passed on an opportunity to enter the NFL draft in the offseason, sticking to a promise he made to himself that he would be a first-round pick.

Rashed, who graduated with a bachelor’s degree in public health last December, said he decided to return to school because he felt like he wasn’t done yet and that his team needs him.

“I feel like I’m supposed to be here. God put me on this earth to play another year and I’m going to finish my career. That’s a big thing,” he said. “I feel like I wasn’t going to leave my team hanging. I’m a team player, I want to be here for my team. Guys look up to me and I want to give them something to look up to when they’re getting older.”

He had to improve his physical pass rush and be able to convert speed to power in getting after quarterbacks. That was another focus of the offseason.

Rashed says he’s always looking to improve his game, whether coming off a good performance or a poor one.

“I feel like little steps could always be big steps, like footwork, hand placement, stuff like that. That’s always a big thing I could use more help on,” he said. “I think just staying low. Sometimes you raise up, get higher and not do as great and that’s the difference between getting a tackle for loss or getting a sack or getting a hurry. I feel like the little things, the little details are the big things right now.”

Last week, two weeks into fall camp, Rashed said he was still getting used to playing with a little added weight. He wasn’t sure how his thumb would respond to contact in fighting through blocks, but it’s worked out well.

With the spotlight put on him for his play last fall, Rashed knows he will again have opponents’ attention. He just has “no clue” how he will be defended. He’ll start to learn that next Saturday when the Beavers open their season at home against Washington State.

“No matter what I’ve got to be ready. Whether that’s from me, I feel like other people also have to be ready,” Rashed said. “They double-team me, that leaves somebody else open. Another outside linebacker, a D-end or D-tackle, they’ve got to make a play.”

Jonathan Smith, entering his third season as the Beavers’ head coach, said he was excited about Rashed’s potential when Smith took over the program. He’s enjoyed experiencing Rashed’s transition into one of the Pac-12’s top defenders.

Smith says Rashed has dedicated himself to studying and learning the game and that he’s been “awesome” for the program.

“Obviously you can take notice of the things on the field. But bringing others along, buying into a newer coaching staff. You know, we didn't recruit him. He’s been awesome that way,” the coach said. “He’s a great example of the type of kid you want. He comes in here and he’s a big-time player and he’s gotten his degree. So yeah, he’s been phenomenal.”

Hamilcar Rashed Jr. thinks teammate Jack Colletto might have a leg up in joining the defense after playing quarterback.

The one item that tops the list for Oregon State’s football coaches when it comes to improving on defense this fall is creating more takeaways.

Oregon State made a significant jump forward between years one and two under head coach Jonathan Smith.

Oregon State's Hamilcar Rashed Jr. celebrates one of his two sacks in a 2019 game against Stanford. Rashed set single-season school records with 14 sacks and 22.5 tackles for loss.

Oregon State outside linebacker Hamilcar Rashed Jr. wants to be a better leader and help the Beavers to a successful season.