OSU football: Rodriguez trades the pitch for the gridiron
Share this
{{featured_button_text}}
1 of 2 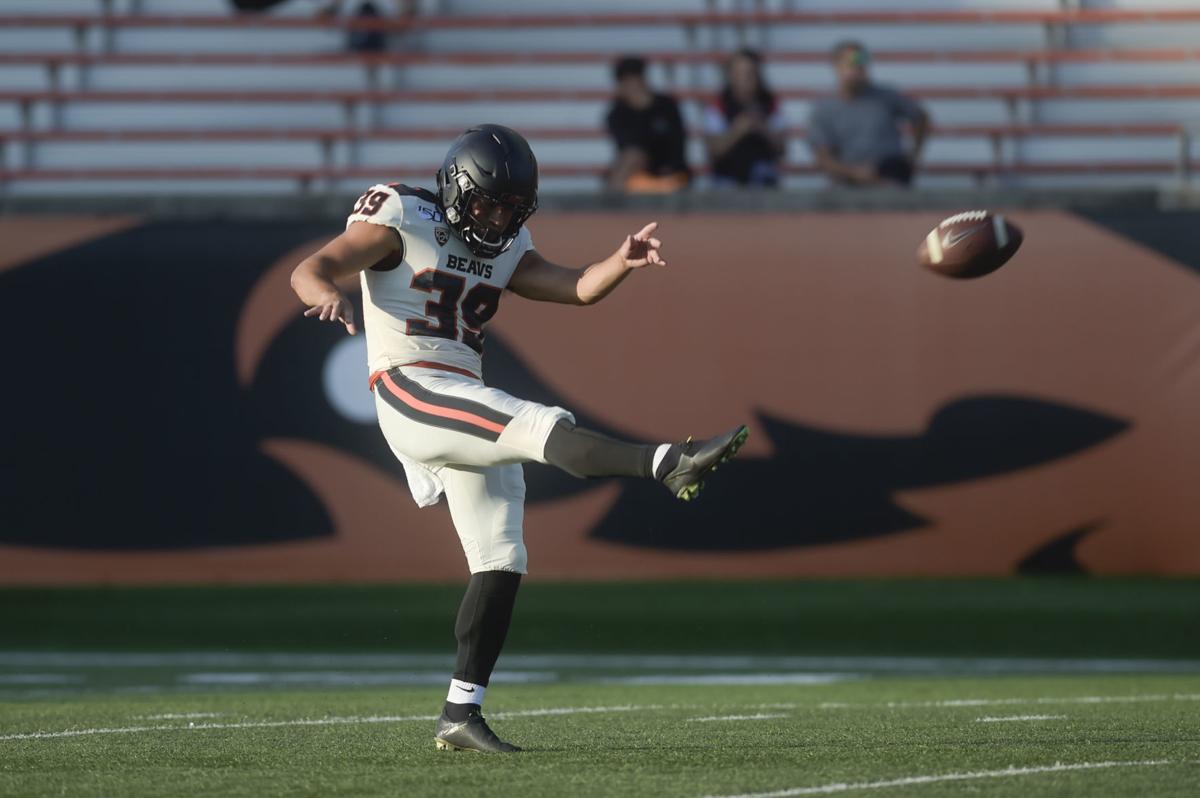 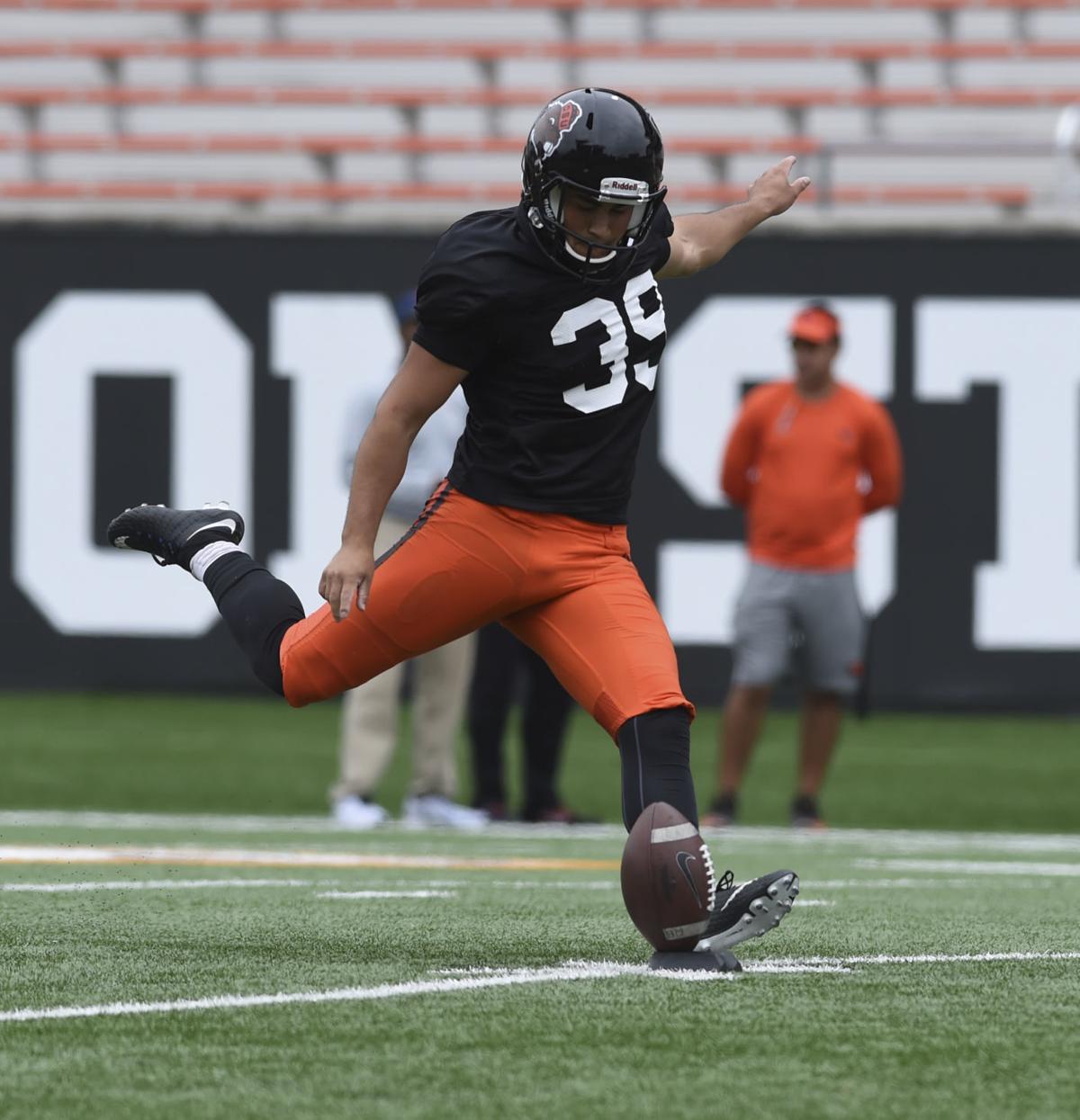 If called upon, Oregon State punter Daniel Rodriguez can also kick off, attempt field goals and hold for kicks.

Growing up, Daniel Rodriguez dreamed of spending his college weekends on the soccer pitch.

His family is loaded with talent in the sport; one sister, Emmy, is a starting defender for Oregon State. Their older sister, Allie, started every game of her senior season for Oregon.

“I thought I was okay,” said Rodriguez, who scored six goals his junior season at Foothill High and earned first team all-league honors. “I held my own out there … Played a little bit of midfield and a lot of defender. I think more success came from football and I just kind of stuck with it.”

The Beavers senior gave up his soccer cleats once it became apparent he was talented enough to kick at the Pac-12 level. He accepted a preferred walk-on opportunity with Oregon State, and is in line to handle starting punting duties once again this fall after a solid 2018 campaign.

Receiving preseason all-Pac-12 honorable mention earlier this summer, Rodriguez could be a special teams weapon for Oregon State this fall as it hopes to improve last year's performance in that department.

“This fall, I'm just excited to get going,” Rodriguez said. “I feel like it’s been a good fall camp just trying to get better everyday, help the guys around me be at their best. I think we’ve been competing a lot, all the guys, all the specialists. So it’s been good. I’m looking forward to it and I’m just excited.”

He is far from the first talented soccer player to transition to the football field, and a strong right leg helped put him on the map as a college prospect, despite having just two football seasons under his belt.

“I think just kind of understanding leg swing,” Rodriguez said of what helped the physical aspect of switching sports. “That’s definitely helped. I feel like in soccer, I was always able to to hit a really nice shot or something like that. It definitely translated in that way. It’s different, but in a lot of ways it's very similar.”

He was athletic enough to keep up with speedy strikers and wingers during his prep soccer days, and has spent that past five years refining the technique needed to pin back the Pac-12’s top returners. Part of that transition required him to embrace the mental aspect of punting that can be nerve-racking for many.

“I’ve gotten a lot stronger and I would say my whole mentality has changed,” Rodriguez said. “Especially for specialists, it’s a one shot, one kill type of deal. You get one opportunity. Whereas with soccer, you’re constantly involved. But I think that’s what I also love about football and being a punter, it’s like you get one shot, one opportunity. At times that’s all you get. I really like it. I like that feeling. It makes me want to do great.”

Oregon State quarterback Jake Luton is a candidate for the 2019 Johnny Unitas Golden Arm Award, as announced on Monday. The honor is given annually to the nation’s top senior or fourth-year junior quarterback.

Luton, who will be in his third season with the Beavers, is one of 49 quarterbacks on the initial watch list for the honor.

Luton, from Marysville, Wash., has played in 12 games for the Beavers, throwing for 14 touchdowns and 2,513 yards. He has completed 223-of-359 (62.1 percent) passes attempted during his OSU career. He has thrown for 300 or more yards three times for the Beavers, most notably a 310-yard effort last season at Colorado to lead Oregon State to a come-from-behind overtime victory over the Buffaloes.

It’s been quite some time since Avery Roberts was able to take the football field for an official game.

OSU football: Luton gets the start at quarterback

Jake Luton went through his “senior” season last year, taking part in Senior Day activities prior to the Civil War and receiving a framed jersey.

OSU football: Beavers confident they are on the right path to success

It’s been a tough five years for the Oregon State football program as the Beavers have failed to make a bowl game since the 2013 campaign.

If called upon, Oregon State punter Daniel Rodriguez can also kick off, attempt field goals and hold for kicks.