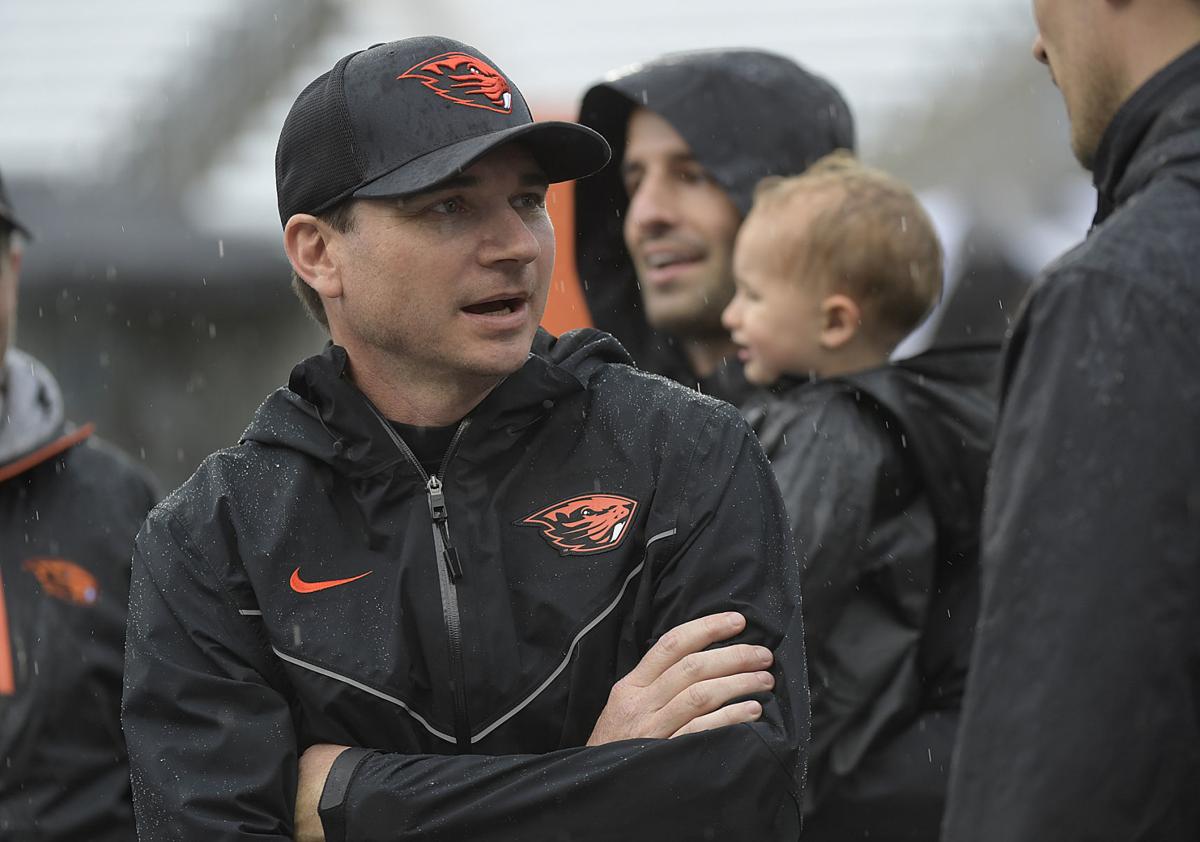 Oregon State head coach Jonathan Smith will lead the Beavers into fall camp for the first time on Friday. The Beavers open the season Sept. 1 at Ohio State. 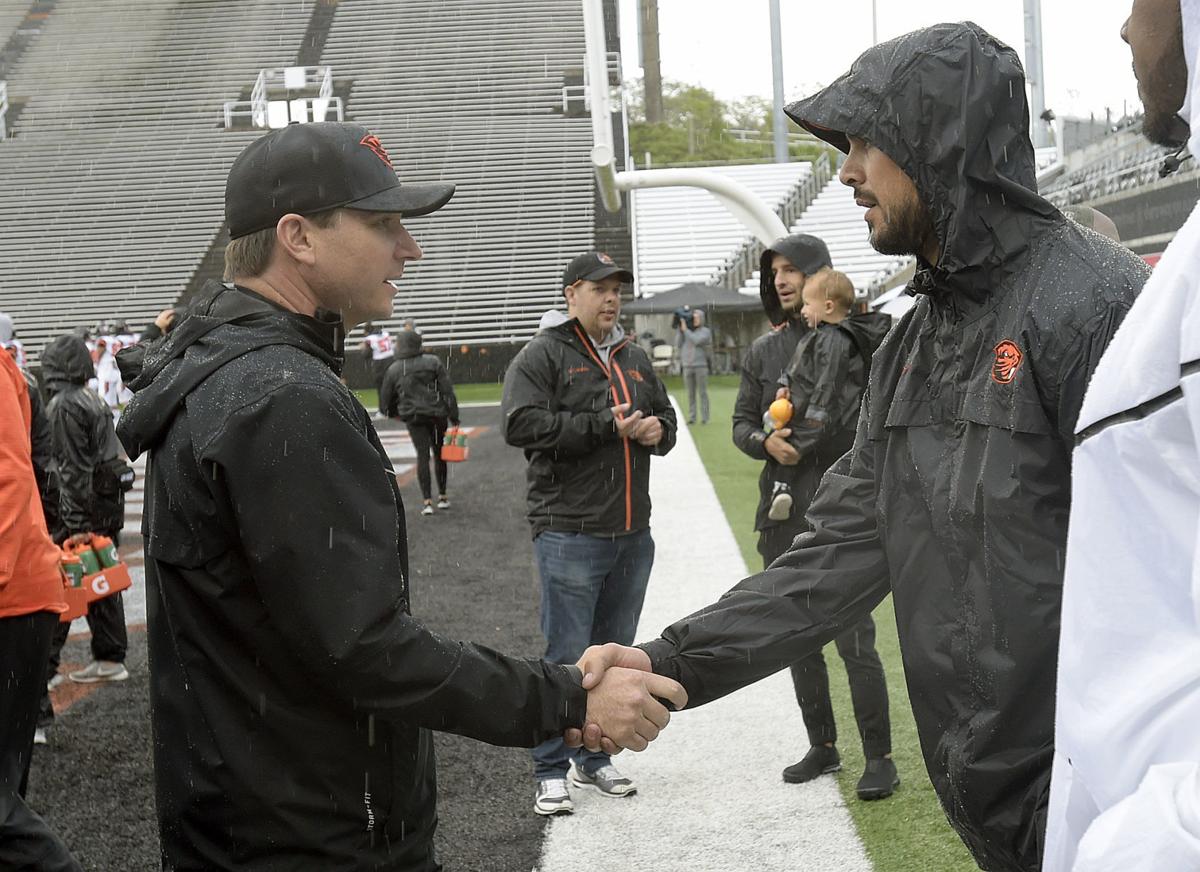 When Jonathan Smith leads the Oregon State football team into Ohio Stadium in a month, it will be the culmination of nine months of preparation for the former Beavers standout who has been tasked with a sizable rebuild.

Smith, who quarterbacked the Beavers to an 11-1 season and Fiesta Bowl victory in the 2000 season, has spent the past eight months building a staff, getting to know his current players, recruiting future players, going through spring practice and getting a better understanding of what it takes to be a head coach of a Power 5 conference.

There is one more step to take — get through his first fall camp and prepare his team for the upcoming season.

It’s been a good learning process for Smith, who served as the offensive coordinator at Washington the past four seasons under Chris Petersen.

“I think we’re always learning,” Smith said Wednesday morning as he met the local media in the Valley Football Center. “… Every time we finish a segment of the year, whether recruiting, spring practice, May meetings, we always rehash. In all aspects there’s always going to be things we are tweaking, changing and getting better at.”

Like all coaches, Smith is excited to get on the practice field for the first time on Friday afternoon to see how much his players have grown, physical and mentally, since the end of spring practice.

By all accounts, it appears to have been a productive offseason.

There are, however, still many questions that need to be answered in a short four weeks before the Beavers take on an Ohio State team that is always in the discussion for a possible College Football Playoff berth.

The Beavers, meanwhile, are predicted to be at the bottom of the Pac-12 after a dismal 1-11 season filled with plenty of turmoil.

That’s all in the past, Smith said.

“We’re focused on us and what we think and how we work,” he said. “I think it’s a slippery slope when you start validating other’s opinions.”

Smith was asked Wednesday if he felt the Beavers had the talent to compete and win games in the Pac-12. While he admitted the conference is “really competitive” and there are some top echelon teams, he is confident they have players in place to do just that.

“Even going back to last year, I look at this team, what they were doing last year — 1-11 — they were competing for a good amount of some games,” Smith said. “What we’re shooting to do is to be able to compete for 60 minutes. In this league you have to bring you’re ‘A’ game week in and week out and anything can happen.”

Smith said he has been pleased with what he has seen out of the offensive line, linebackers and receivers.

“We’ve got some spots to do good things,” he said.

Smith admitted the battles for starting jobs are open after having just a few spring practices to gauge with several potential starters missing those workouts for various reasons and everyone learning new schemes.

“There’s nothing set in stone,” Smith said. “I think we kind of anticipate some of those guys being the starters but we don’t know what’s taken place in the summer and who’s improved.”

Most everyone who missed the spring with injury is expected to be ready for the fall, with the exception of safety Omar Hicks-Onu, who will be limited, Smith said.

“So we’re still looking to find out exactly what we’ve got in some positions with some guys missing in the spring,” Smith said. “I know what the talent looked like in the spring and I’m excited (about) the work they did in the summer to improve and to find out more in August.”

The biggest position that is still up in the air is who will start at quarterback. Jake Luton won the job last season but played just four games before being injured.

Smith said Wednesday there is no timetable for a decision.

“Sometimes it just takes a minute until we totally know,” he said. “I’m excited about two of those guys having to continue to compete and not get comfortable and we’ll just kind of see where that goes.”

The next four weeks will be crucial in the early development of the program Smith wants to build in Corvallis. While the task could be daunting, he knows he’s not alone and feels good with the staff he has in place to help do what is needed to turn things around as soon as possible.

“I feel really fortunate these guys are back here or bought into what we’re doing,” Smith said of his staff. “Just watching them teach, I think they’re great teachers of this game, I think they’re positive with the kids, they’re pushing the kids.

“I feel great how we’re on the same page even though it’s only been (eight) months on where we’re headed and the contributions because we’ve got a bunch of guys who have been in some really good places and won a lot of games.

“So their contributions and ideas on practice plans or how we’re working or team meetings and all of this I think we’ve got great value in this group.”

Mike Riley was enjoying his time as an assistant coach with the Oregon State football program, happy to help out in whatever way first-year he…

Noah Togiai admitted Friday evening he didn’t realize how many quarterbacks there were on Oregon State's roster until that day’s practice.

Oregon State head coach Jonathan Smith will lead the Beavers into fall camp for the first time on Friday. The Beavers open the season Sept. 1 at Ohio State.