OSU gymnastics: Destinee Davis makes the most of her return to the sport
Share this
× 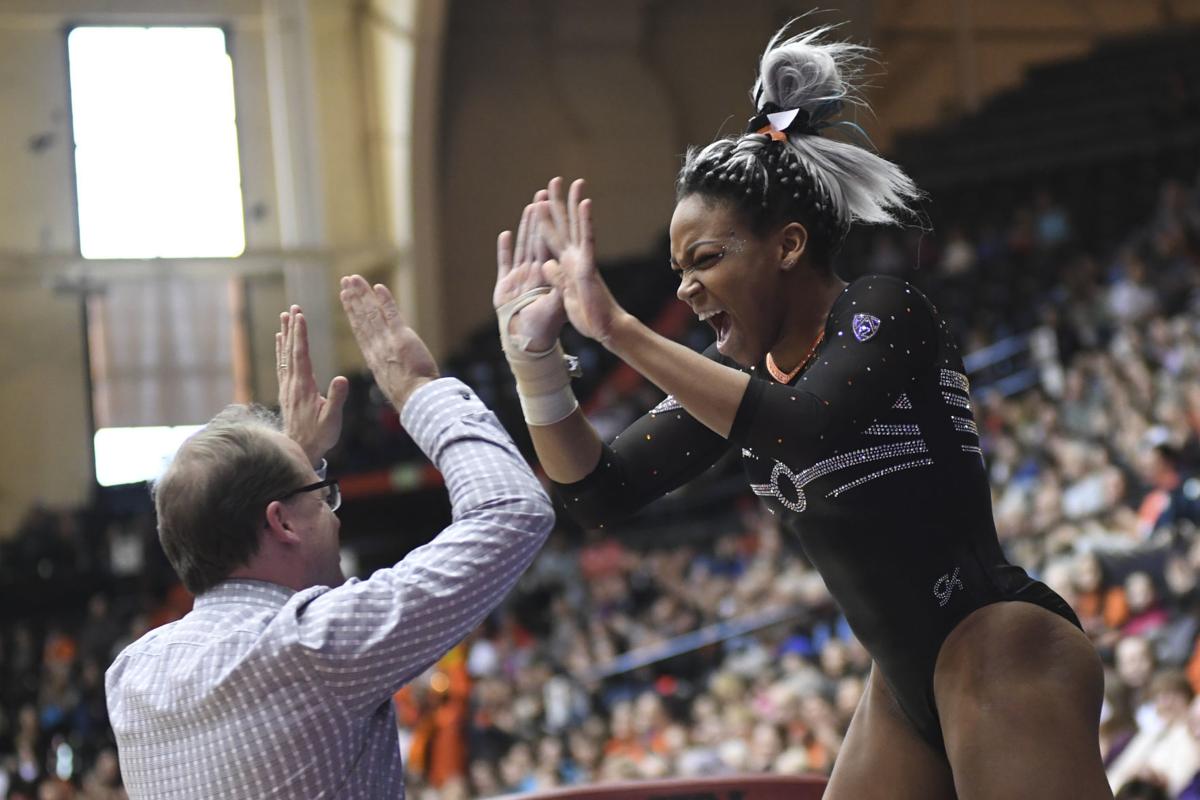 Oregon State sophomore Destinee Davis, right, celebrates a good vault with associate head coach Michael Chaplin. After leaving the sport for two and a half years, Davis is finding her stride as a college gymnast. 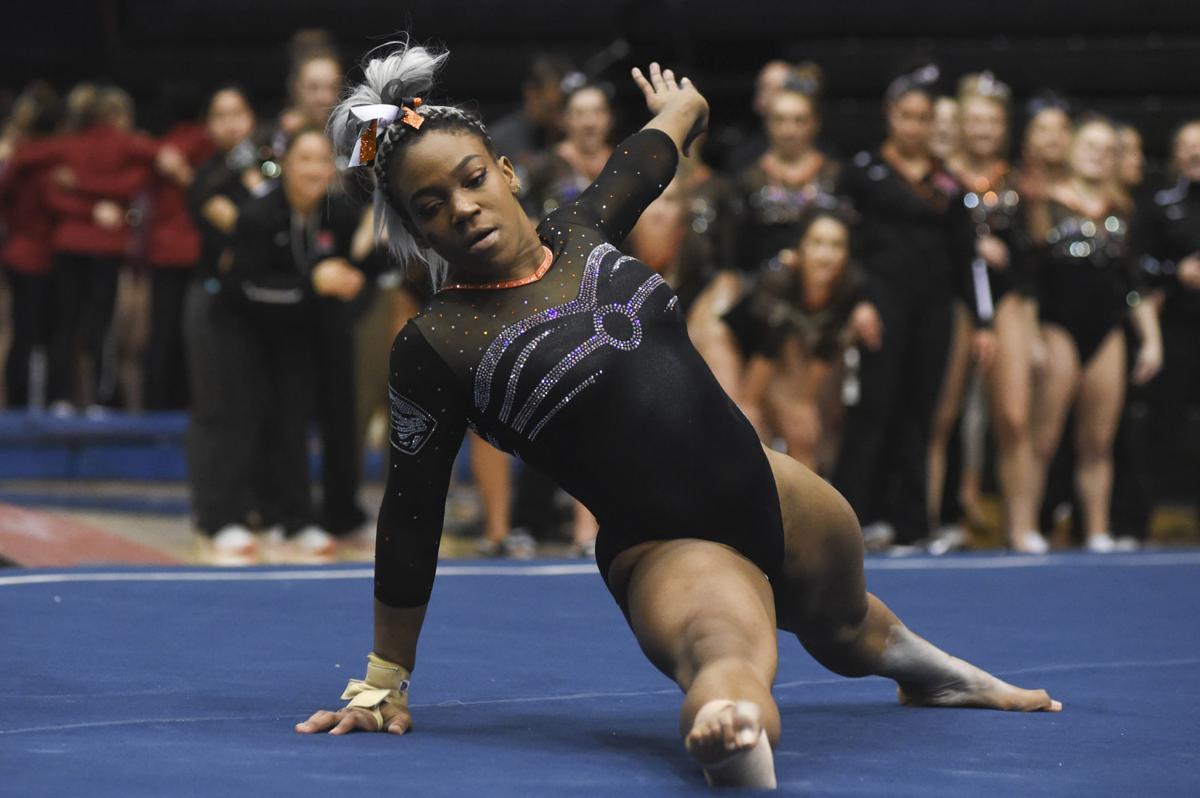 Sophomore Destinee Davis competes on floor for Oregon State. She has made significant strides this season for the Beavers.

There was a time when Destinee Davis was all but done with gymnastics.

Family issues had drained Davis' desire to train, and getting from home in Woodland, Washington, to the Multnomah Athletic Club was not always an easy task.

For about two and a half years, Davis stayed away from the sport for the most part.

"It was just hard to get there and it was hard to motivate myself to go because of all the other stuff that was going on," Davis said.

But as she closed in on the end of her sophomore year in high school, Davis realized how much she missed gymnastics.

She decided to step back into the sport.

"Getting back into it, I had grown and changed and everything, so it was hard to get back into it," she said. "But it was something that I really didn't want to give up on, because I had been doing it for so long prior to me being out of it for a few years and it kind of just turned into the piece of me that I could keep regardless of what was going on in my life besides that."

Once she returned, Davis was able to get back in the swing of things without too much trouble.

The talent was there, it was just a matter of focus and work.

"It didn't really take that long because I'm one of the people who like to go from zero to 100 in a short period of time," Davis said. "It was hard getting back into it, but it was easy because I was so willing to push myself to get back into the sport and get back to where I was."

It wasn't long before Davis was considering a college gymnastics career.

She realized that she would most likely not continue the sport if she did not go the college route.

"I think it was always a potential goal to be a collegiate athlete and I kind of just decided that it would be best for me if I pushed myself to get into a college and to be on a team like that because I feel like I wouldn't have, I would've just done gymnastics my senior year and been done with it," Davis said. "I wouldn't have tried for elite again or anything like that, so it was a really big decision to make, but it's one that I'm really happy I did make."

When Davis made the decision to continue her gymnastics career at the college level, Oregon State was the top option.

She liked the fact that Corvallis was close to her hometown but not just minutes away.

A visit to Oregon State made the difference for Davis.

"My club coaches would tell me, 'oh, these people have been watching you and they're still looking out for you.' Then when I finally got the chance to meet with (head coach) Tanya (Chaplin) and (associate head coach) Michael (Chaplin) and (assistant coach) Brian (Amato), I kind of knew that was where I was supposed to be," Davis said. "Just because they are very extraordinary people and they're very willing to push me to help myself and they're very willing to help me as much as they possibly could. And that's what sold me."

Davis did not make an immediate impact for the Beavers as a freshman.

She competed in one meet and scored a 9.650 on beam against UCLA. She performed an exhibition on the event several times but did not make another official appearance on beam or any other event.

"I think freshman year I had a lot of growing to do as a gymnast and as a person because I was still coming out of all the family issues that were kind of surrounding me at all times," she said. "I think once I was able to be on my own I was able to mentally build my confidence back up and gain control of myself and who I was despite everything that was going on outside of the situation here. So freshman year I just had to push myself and kind of survive in a way."

Davis began this season competing on vault and beam. She had some struggles on beam early on and spent the Arizona State and Washington meets on the sideline.

Vault has been a consistent event for Davis throughout the season. She has four 9.850s and a 9.875 against ASU. She has not scored lower than 9.800.

She returned to competition on floor last Saturday after scoring a 9.850 in exhibition against BYU. Davis bettered that with a 9.900 against Michigan State.

It's been a significant step up.

"I think last year was just getting back into it again," Tanya Chaplin said. "She had been out of gymnastics for a while and so coming in on a regular basis and doing everything, it just took her a little bit of time and now everything is just coming together for her and it's great to see. She works her tail off to make that happen.

"I think that's the biggest thing. She's just determined to come back to everything. We just still need to get back on bars and that's a work in progress."

FRIDAY: No. 13 Oregon State at Sacramento State with No. 17 Arizona State and UC Davis, 7 p.m.

TV: None. Live stream will be available at hornetsports.com

OSU gymnastics: Law the heart of the program

Jaime Law was looking forward to performing for the Oregon State gymnastics team on senior day.

Oregon State sophomore Destinee Davis, right, celebrates a good vault with associate head coach Michael Chaplin. After leaving the sport for two and a half years, Davis is finding her stride as a college gymnast.

Sophomore Destinee Davis competes on floor for Oregon State. She has made significant strides this season for the Beavers.