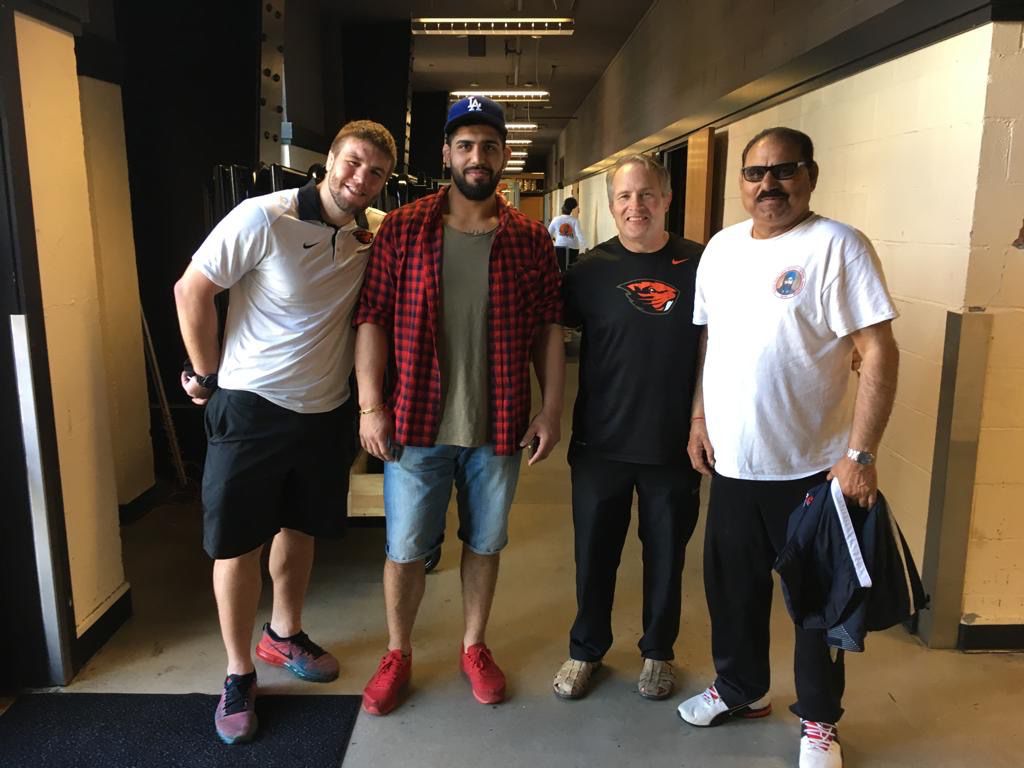 Amar Dhesi, in cap, poses for a photo with, from left, two of his former Oregon State coaches in Taylor Meeks and Jim Zalesky, along with his father, Balbir Dhesi, far right. 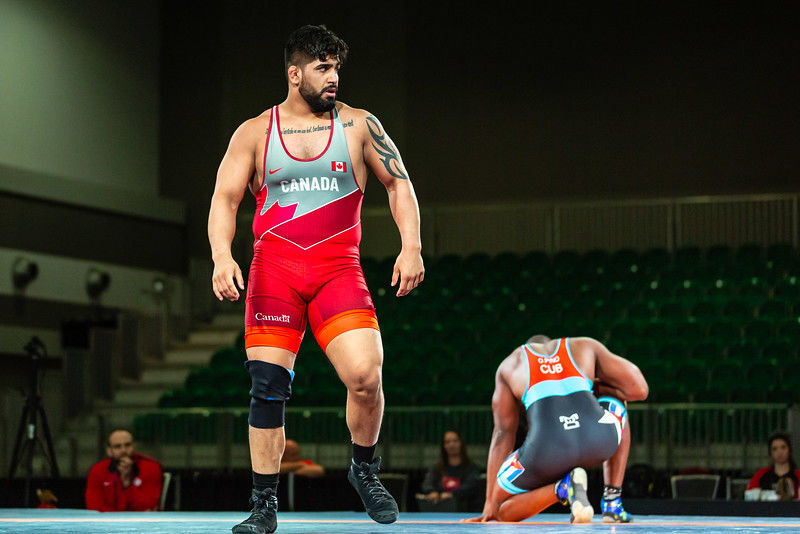 Former Oregon State wrestling standout Amar Dhesi won three straight matches at the Pan Am Qualifier in mid-March in Ottawa, Ontario, to qualify for the Olympics. 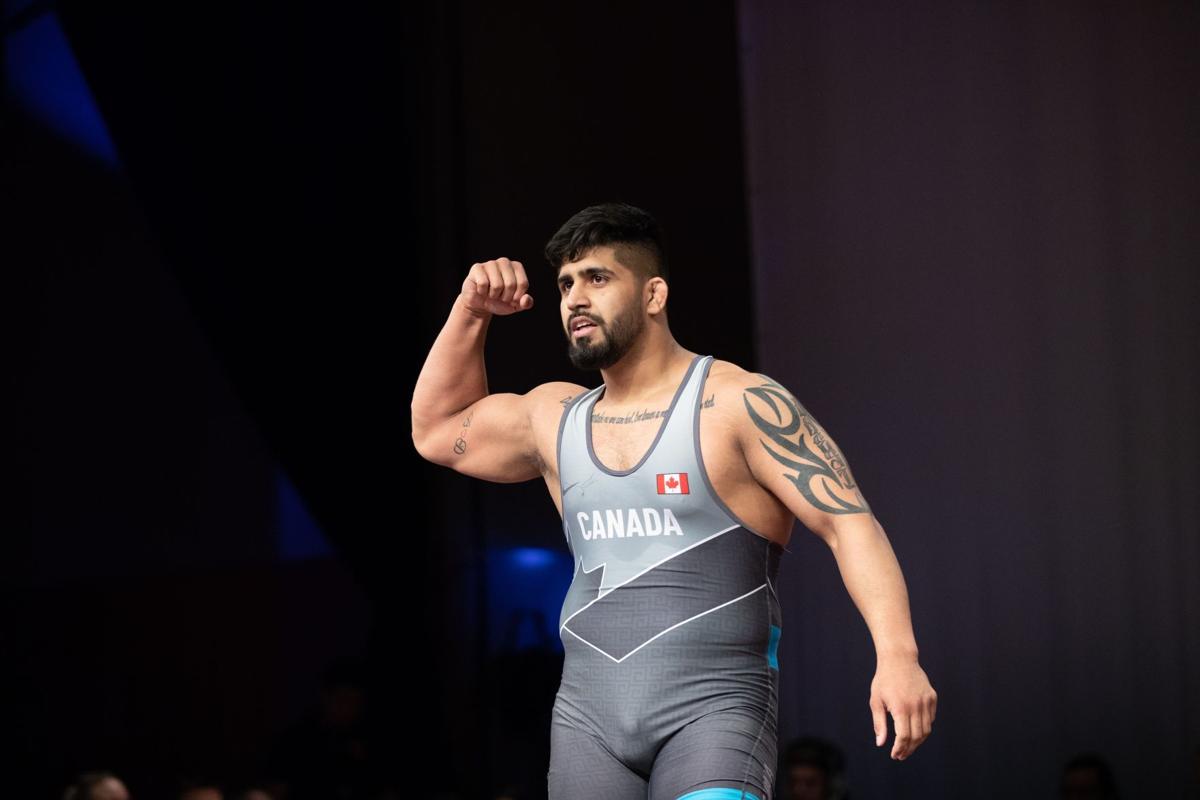 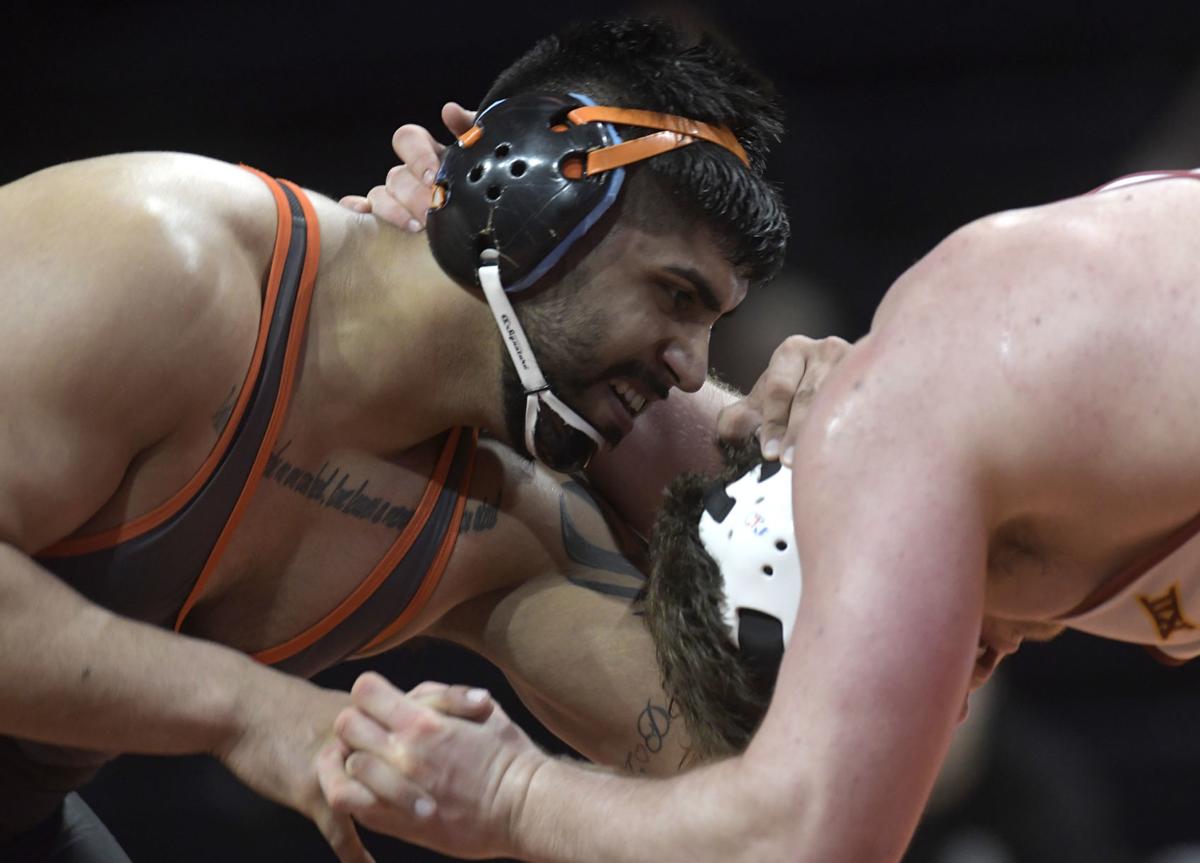 But he wasn’t able to see his full potential. Family was more important than wrestling, and his seven sisters came first.

“In our culture, he had to get all his sisters married before he could even start his life. So he had a lot of responsibility on his shoulders,” said Amar Dhesi, the younger of Balbir’s two sons and a wrestler himself.

So imagine the pride Balbir felt in March watching at home with family when Amar made the Tokyo Olympics and will represent Canada, the family’s home since 1976.

“It was like a dream come true,” he said. “It’s hard to put into words what it meant for me and my wife. The Olympics are the highest level of sport. Watching my son accomplish that was amazing.”

A three-time All-American at Oregon State, 24-year-old Amar Dhesi knew what it meant to his family and especially his father, who opened the Khalsa Wrestling Club near their home in British Columbia as a way to help others progress in the sport and chase their potential.

“I know he always had the goal for me in his head. What he started and I could finish, kind of thing,” Amar Dhesi said. “He always wanted this for me and I did, too.”

Amar Dhesi took the mat for the first time at age 5 or 6 and as he got older he better understood the magnitude of the Olympics and what he wanted to get out of wrestling.

He was a standout at Burnaby Central Secondary School, just a few miles east of Vancouver, winning a junior world title and three national club championships under his father’s mentorship.

“The first day I took Amar to practice I believed he could make it to the Olympics,” Balbir Dhesi said. “It’s hard to believe he’s accomplished so much. I still see him as the little Amar running around tournaments. I believe his dedication and ability to overcome adversity have been his greatest disciplines.”

Two different knee injuries cost Dhesi two seasons at Oregon State, but those setbacks didn’t prevent him from competing at a high level. He placed fifth at the NCAA tournament twice, including his final year at OSU in 2019, and third another time.

His best collegiate season came in 2018, when he was Pac-12 champion for the second of three times and the conference tournament’s most outstanding wrestler for a second time before taking third nationally.

Dhesi credits Oregon State for the progress he made in his nearly six years there. He remains close with his former coaches Jim Zalesky, Troy Steiner and Taylor Meeks, who still call to see how he’s doing.

“I give them everything. I have tremendous respect for all the coaches and all the athletes I grew up with wrestling there. They helped me out a lot,” Dhesi said. “I went through so much stuff where I grew as a person and a wrestler. That really helped me.”

Last December, he won the Canadian Olympic trials, a hurdle he wasn’t able to clear four years earlier during this third year at Oregon State. He followed that up with a semifinal win — pinning Puerto Rico’s Charles Merrill — at the Pan American Qualifier in Ottawa, Canada, to clinch an Olympic berth in the 125-kilogram (275.6-pound) weight class in the freestyle discipline.

“It was a big goal for me to get here, but I still have a lot of work to do to get that medal,” Amar Dhesi said.

The center’s head coach is Tervel Dlagnev, who was an Olympic placer, world championship medalist and NCAA Division II champion all twice. His staff is filled with others also carrying impressive individual accolades.

“He was one of my idols growing up and I really liked the way he wrestled. It was really nice to work with him,” Dhesi said of Dlagnev.

It was in Columbus that Dhesi furthered efforts to translate the skills he’s been taught into competition, which he admits to struggling with over the years.

Dhesi has also worked on mental preparation and approach to matches at the center, and he believes it’s paid off.

“I’m finally wrestling the way I know I can on the mat. I’m excited to see what happens,” he said. “You never stop learning in this sport, especially in wrestling. That’s the number-one thing keeping me around. I love learning. I love the growth of the person that you become and also the wrestler.”

It was expected that Dhesi and Korey Jarvis, who defeated Dhesi by a close margin in the 2016 trials, would reach the finals again, and they did.

But the result was different the second time around. Dhesi was dominant in the best-of-three match, winning with technical falls of 10-0 and 11-0.

In the previous trials, Dhesi and Jarvis tied two matches by a 2-2 score, but Jarvis won both on criteria. Jarvis, Dhesi’s elder by about nine years, went on to take eighth at the Olympics.

“I think the last six, seven, eight months, I’ve been performing the best I ever have,” Dhesi said.

At the Olympic qualifier about three months later in Ottawa, as sporting events and organizations around the world were shutting down due to the coronavirus, the tournament was to be held without fans in the stands. But organizers agreed to allow entrance to athletes’ family members who had already traveled to the arena.

Two of Dhesi’s cousins from British Columbia were among the roughly 30 to 40 people in attendance, Dhesi said.

“It was weird at first. My first match was a bit strange, not having anybody and it was very silent out there,” he said. “But my two cousins made enough noise for the whole crowd.”

Dhesi dominated two group-round matches, winning by a combined 21-8. That put him in the semifinals, where he took 62 seconds to pin Merrill. Dhesi lost by injury default in the final.

He returned home March 16, the day after the qualifying tournament concluded, and has been at home with his family — parents Balbir and Gurbax, older sister Gulshan and older brother Parm — ever since.

“I think it means more for my family and the people around me that came up with me just to watch me go through it,” Dhesi said. “To see their reactions and get those phone calls and give my dad a big hug, it was awesome.”

The long road getting to the Olympics was made a little longer by the pandemic.

Eight days after the qualifier, it was announced that the Games would be postponed until 2021. Dhesi was sad to hear the news, but then he realized the situation he’s in with his progression.

Even with the athletic world largely on pause, it’s full-speed ahead for Dhesi in preparation for competing in Tokyo almost 15 months from now.

He hopes to return to training in Columbus when that’s possible.

People have offered Dhesi training equipment to use at home, which has been a plus. He plans to compete in a ranking tournament in which he will have an opportunity to improve his Olympic seeding. He’s currently ranked seventh in the world.

“It’s one single goal, which is to prepare for the Olympics and perform the best I can that day,” he said. “It’s easy to think that way, wrestle as much as I can and get better until then.”

Legend Lamer found value in taking a redshirt during his first season with Cal Poly.

Amar Dhesi, in cap, poses for a photo with, from left, two of his former Oregon State coaches in Taylor Meeks and Jim Zalesky, along with his father, Balbir Dhesi, far right.

Former Oregon State wrestling standout Amar Dhesi won three straight matches at the Pan Am Qualifier in mid-March in Ottawa, Ontario, to qualify for the Olympics.