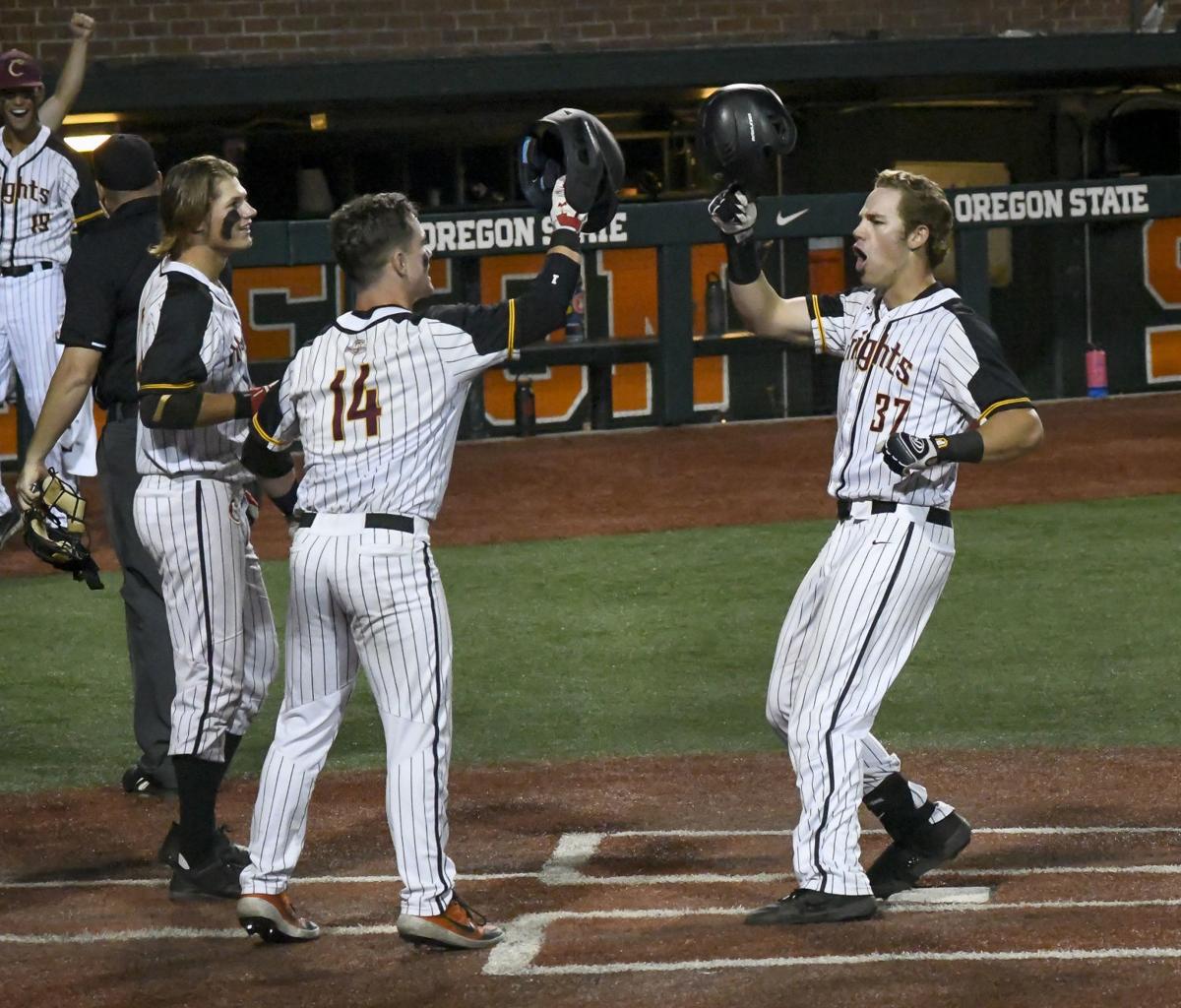 Nick Yovetich is greeted at home plate after hitting a three-run home run in the bottom of the seventh inning to give the Corvallis Knights a 6-2 lead. 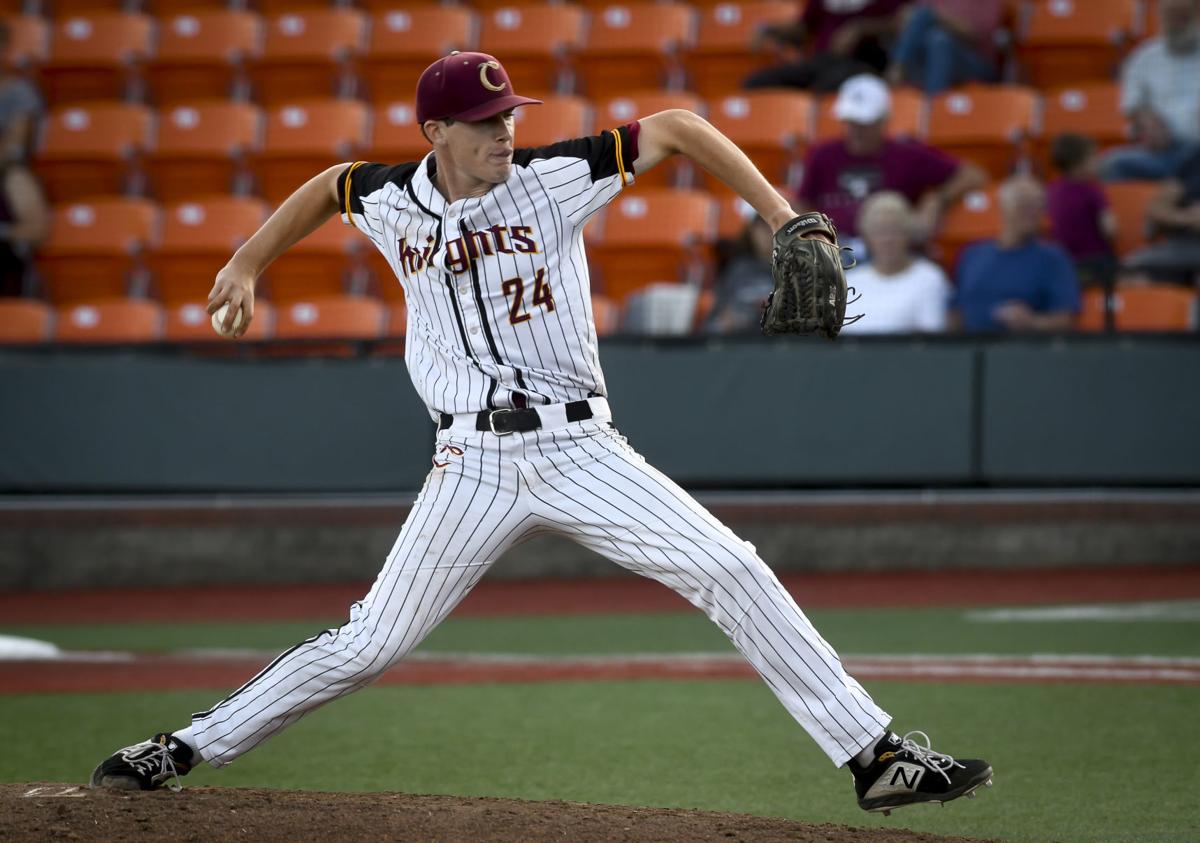 Corvallis starter Connor Redmond pitched 6 ⅓ innings and kept Walla Walla off balance for most of his time on the mound. 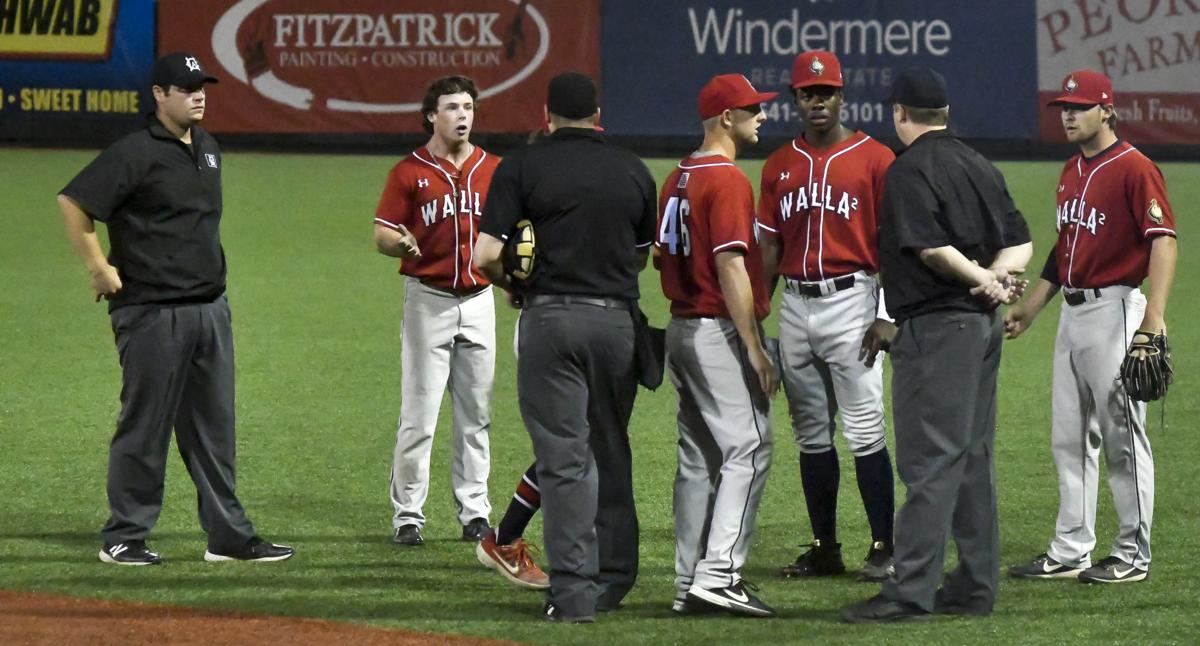 Two of Walla Walla's players and head coach Frank Mutz were ejected from the game on Thursday night.

Walla Walla kept hanging around Thursday night, threatening to do what it did a day earlier and play the spoiler at Goss Stadium.

But in the deciding game of the West Coast League South Divisional baseball series, Nick Yovetich made sure that wasn’t going to happen again.

The University of San Francisco outfielder’s three-run home run in the seventh inning gave Corvallis some breathing room, and the Knights held on for a 6-2 win to advance to the West Coast League baseball championship series.

“As a baseball player we live for those big moments,” said Yovetich, who came up with two on and two outs after Briley Knight reached on a bunt single and Michael Curialle was walked.

“It was a moment when the team needed me and the rest of the guys and I’m happy that I was able to be in there, step up and come up big.”

Corvallis (52-13) travels to Victoria, British Columbia early Friday for the best-of-three series opener at 6:35 p.m. The Knights will play for their fourth straight league title.

Corvallis and Victoria agreed before the playoffs began that, should they meet in the championship series, they would move up the game 1 date by one day, and open in Victoria on Friday instead of Saturday.

Victoria outlasted visiting Wenatchee on Thursday, 8-7. The home team scored three runs in the bottom of the ninth inning after Wenatchee got four in the top half.

At Goss, a big opportunity was presented to Yovetich, who didn’t play in the first two games of the best-of-three series.

Knights head coach Brooke Knight said after Thursday’s contest that Yovetich was “right on the cusp” in playing earlier but that difficult decisions kept him on the bench. Knight said he told the player that his time was coming.

“Look at that. What a special moment,” the coach said. “He’s a hard-working guy.”

After Yovetich’s smash, two Walla Walla players, head coach Frank Mutz and a apparently a team administrator were reportedly ejected from the game.

Corvallis starting pitcher Connor Redmond kept the Sweets in check and the Knights in the lead through six-plus innings. Abbott Haffar and William Kempner finished the job in relief.

Knights first baseman Tracye Tammaro came through in his opportunity after batting .197 in the regular season.

Tammaro got two hits, his first multi-hit game in more than a month, including a run-scoring double in the fourth inning.

“That’s baseball. Ups and down the whole time,” said Tammaro, who plays at University of Portland. “At the end of the day I was just trying to help out the team. I’m just glad I did that.”

Added Knight: “He got in a rut offensively but he stayed with it and kept swinging. The big bunt and the big double. It was kind of supposed to happen for him.”

Redmond, heading to Montana State Billings after playing at Cal Poly, retired Walla Walla in order in the first. He gave up a leadoff walk in the second inning and no more baserunners until Parker Price opened the fourth with a lined single to center field.

Redmond then got a strikeout looking, picked off Price at first and drew a fly ball to end the threat. He got the Sweets (35-27) in order in the fifth, including two strikeouts, before Carson Green led off the sixth with a home run to left field to close the gap to 2-1.

Redmond pitched into the seventh, leaving with one on and one out after a leadoff fielding error by a teammate. He allowed three hits, one earned run and a walk with six strikeouts.

In relief, Haffar got a comebacker for an out but then walked a batter and gave up Emanuel Dean’s RBI single to right that again cut the Knights’ lead to a run.

A walk to Curialle and a fielding error on a Jake Harvey grounder gave the Knights two runners in the second. Holcroft followed with a single deep in the hole at second that scored Curialle for a 1-0 lead.

Corvallis got some more help from the visitors in the fourth.

Curialle, leading off the inning, reached safely on a fielding error. He then stole second base, but would have been out had the throw to second not been dropped. With one out, Tammaro then doubled to center field to make it 2-0.

With the lead cut to one in the sixth, the Knights took advantage of two free baserunners to start the at-bat in the bottom half. Tammaro’s bunt up the third-base line stayed fair and the bases were loaded.

Corvallis took Tuesday’s series opener at Walla Walla, in southeast Washington, 6-3. Wednesday at Goss, the Knights missed out on a chance to win the series when the Sweet rallied from a 4-1 early deficit, scoring six runs in the ninth to win 9-4. The loss snapped Corvallis’ eight-game win streak.

Another championship series appearance was well within sight for Corvallis on Wednesday night. Just three outs away.

WALLA WALLA, Wash. — Left fielder Jake Holcroft had three hits, two RBIs and a run on Tuesday night to lead the Corvallis Knights to a 6-3 win…

Each summer, a new group of baseball players roll into town to continue chasing their dreams with the Corvallis Knights and face some of the t…

Nick Yovetich is greeted at home plate after hitting a three-run home run in the bottom of the seventh inning to give the Corvallis Knights a 6-2 lead.

Corvallis starter Connor Redmond pitched 6 ⅓ innings and kept Walla Walla off balance for most of his time on the mound.

Two of Walla Walla's players and head coach Frank Mutz were ejected from the game on Thursday night.