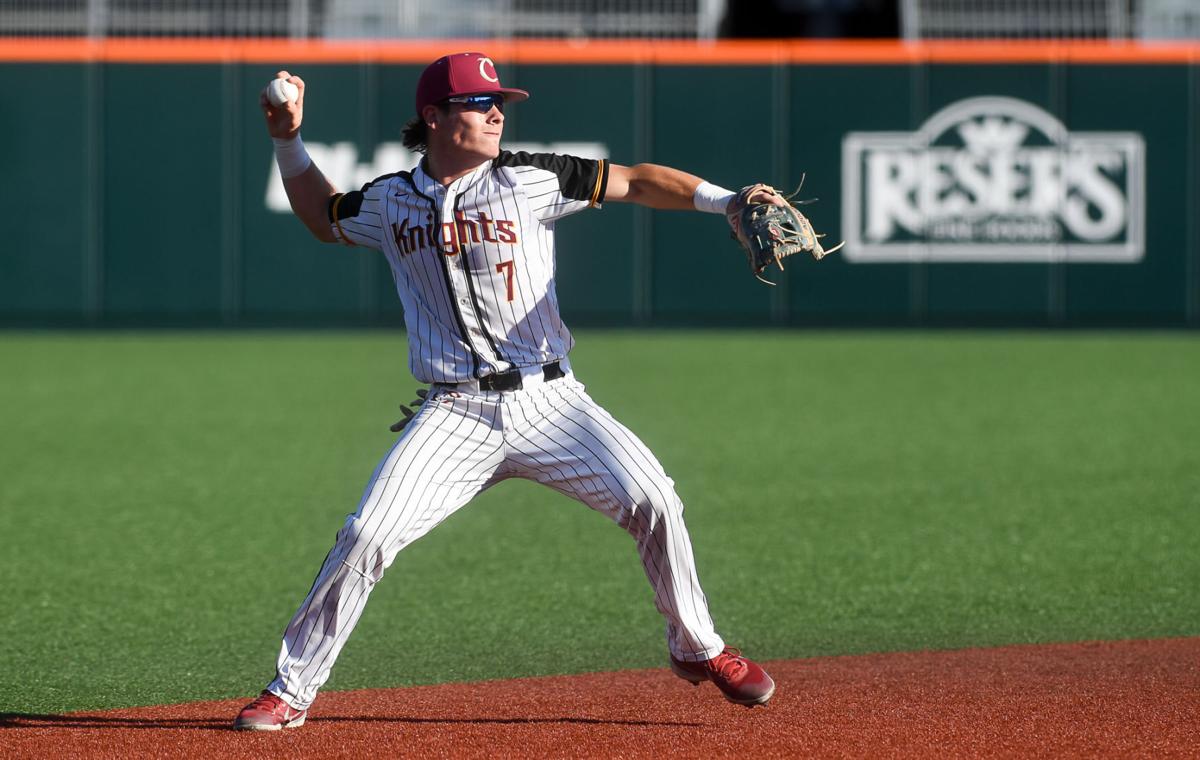 Incoming Oregon State freshman Travis Bazzana has spent time at second base, shortstop and outfield in his first month with the Corvallis Knights. 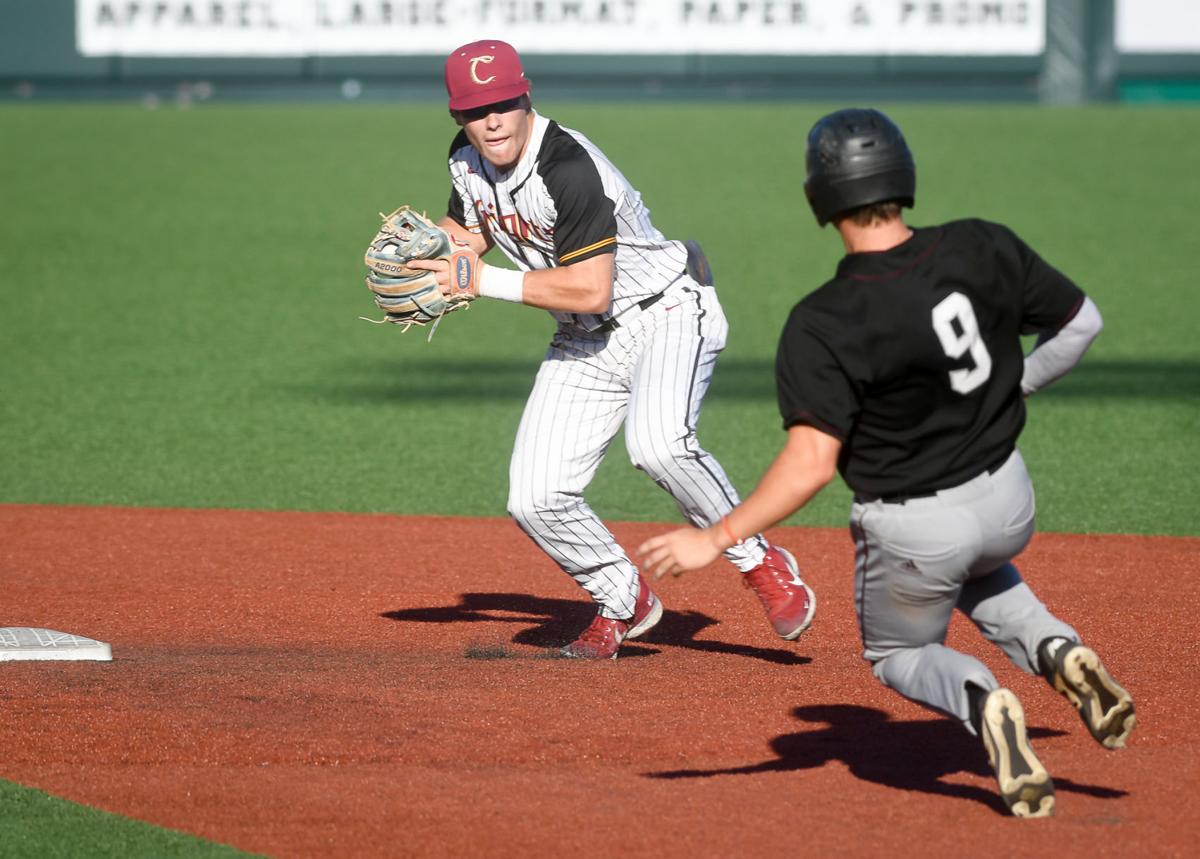 Travis Bazzana is spending the summer with the Corvallis Knights before joining the Oregon State program. 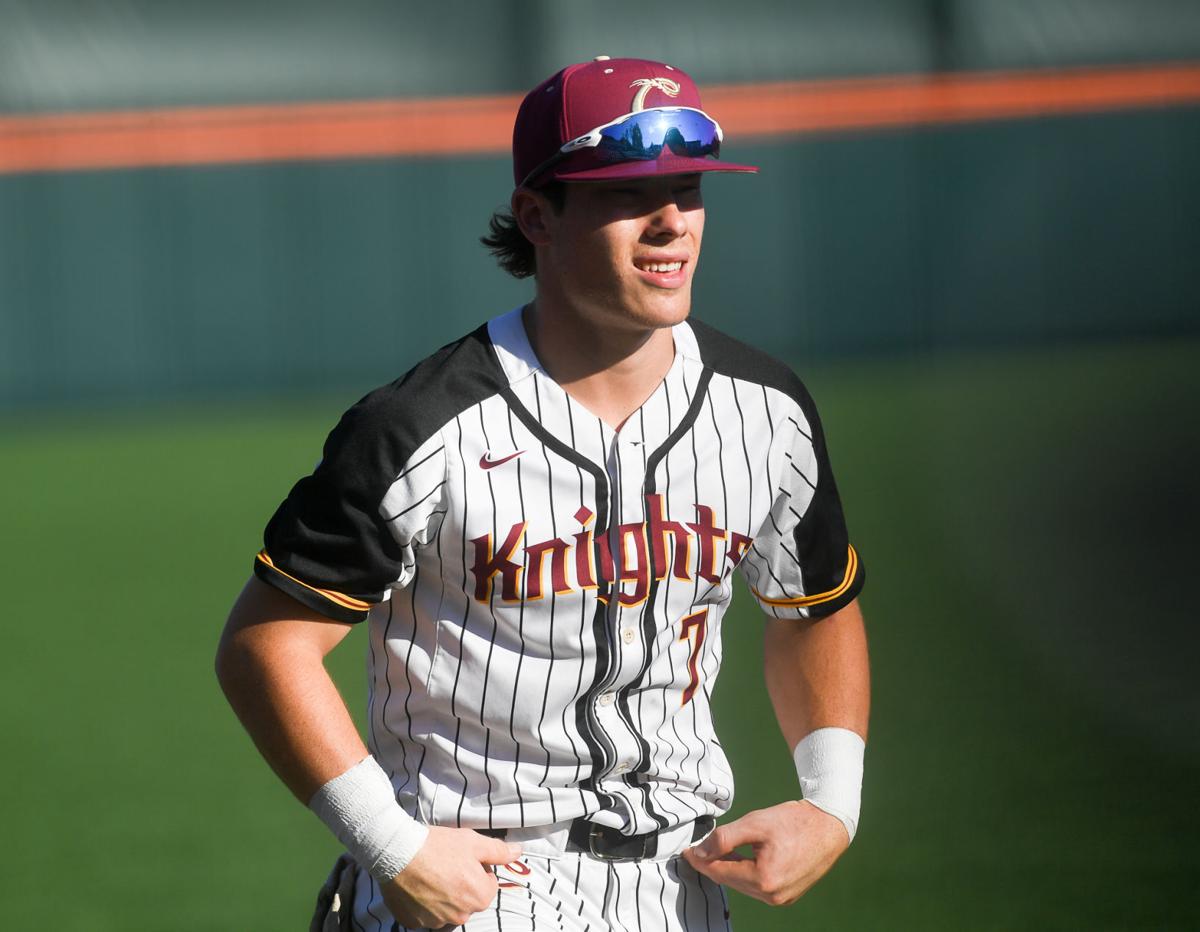 Travis Bazzana has been one of the most productive hitters in the Corvallis lineup during his first season playing in the West Coast League. 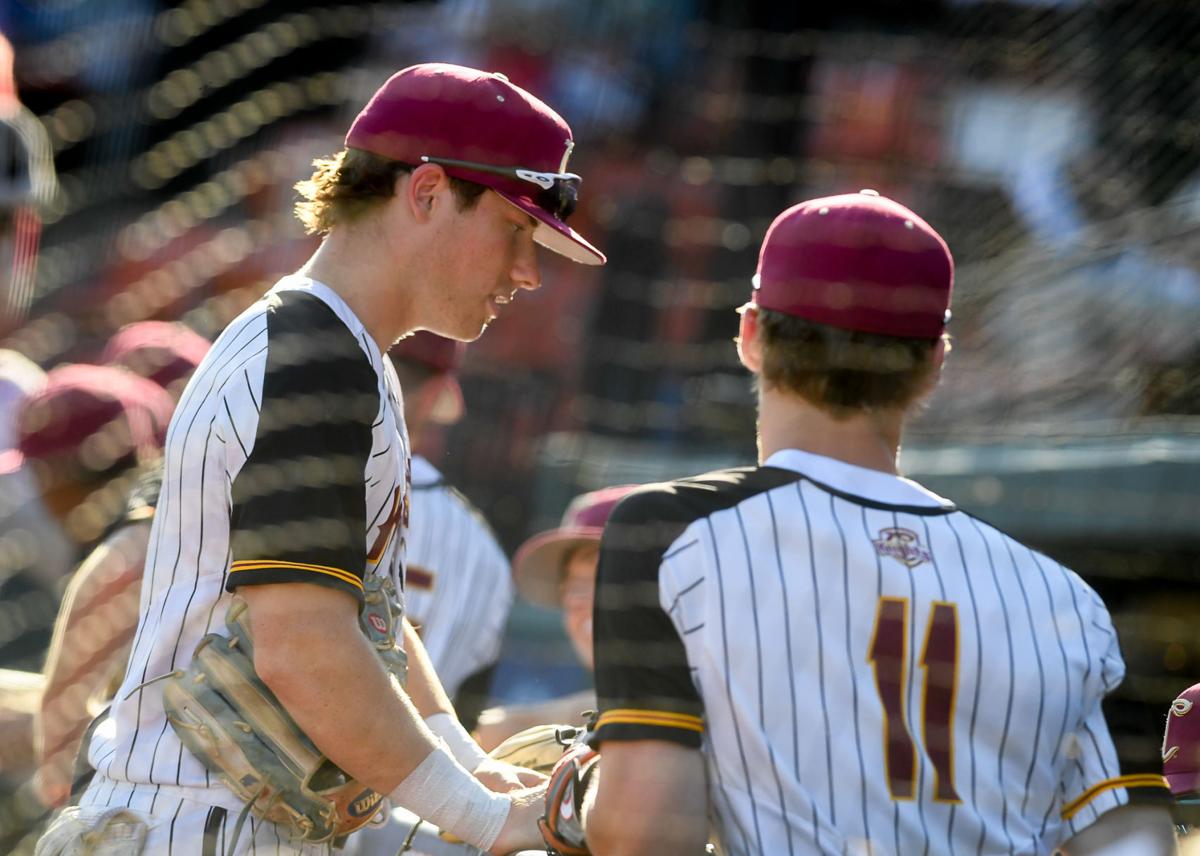 The Knights defeated Ridgefield 5-2 to earn a spot in the West Coast League playoffs.

Travis Bazzana doesn’t consider himself to be a particularly adept writer. He doesn’t plan to major in English or journalism, and if you ask him to write an essay, he admits that the final draft isn’t going to fool anybody into thinking that he’s an author.

But when he is passionate about a subject, or wants to express a memory, the words start to flow.

So, a little less than a month into his career with the Corvallis Knights, when a moment of serendipity caused him to reflect on his own baseball journey, Bazzana put pen to paper in order to articulate his gratitude for the opportunity that led him to this point.

Bazzana, a first-year Corvallis player who is one of the gems of Oregon State’s 2021 recruiting class, is off to a torrid start with the Knights this far. Through Tuesday, he was hitting .368 with six doubles, three triples and nine stolen bases while splitting time at shortstop, second base and in the outfield.

Born in Sydney, Australia, Bazzana has only ever dreamed of playing baseball at Oregon State. He worked tirelessly as a child to make that dream a reality. With the way things have unfolded recently, he couldn’t have written a more picture-perfect narrative if he tried.

Bazzana is Corvallis’ leading hitter among players who start regularly, owns the second-best batting average in the West Coast League and is putting up those eye-popping numbers against Division I-caliber competition that will help mold him into a Pac-12 ready player for Mitch Canham’s Beavers.

“It still kind of gives me goosebumps walking out onto this field every day,” Bazzana said while standing under the Goss Stadium lights after a recent home game. “I was here 18 months ago getting recruited and it was surreal — still a dream school and dream-type thing."

Last week, the Knights hosted a promotion sponsored by Big League Chew, a popular bubble gum brand that is a staple of youth baseball culture. Before the promotion, Bazzana approached Knights’ CEO Dan Segel and asked if he could publish a blog post on the team website. He wanted to tell the story of how Big League Chew had kick started his dreams of playing baseball in America.

As he tells in his reflective essay, when he was 11, Bazzana was selected to represent Australia at the 12U Cal Ripken World Series in the U.S. He was thrilled — barely 11 years old, he was the youngest player on the team and was being presented with the opportunity of a lifetime. But the fee to fulfill that dream would be $5,500. He knew that cost would put a strain on his parents, so he and his family brainstormed ways to fundraise.

The solution? He would sell Big League Chew at baseball tournaments he attended.

Bazzana bought the product in bulk from a U.S. wholesaler and turned a tidy profit reselling it at games. The money he accumulated selling shredded bubble gum that summer helped pay his way to the Cal Ripken World Series.

His blog entry partially tells the genesis of how his baseball career began in earnest, but from a more broad standpoint it also reveals the sincerity, expressiveness and determination that has helped Bazzana become one of the top college baseball prospects on the West Coast and make the unlikely leap from Australia to the Pac-12.

“He’s very comfortable in his own skin with who he is,” Corvallis coach Brooke Knight said. “He’s an intense guy, which I love. You’ve seen his numbers — they’re just fine. And he still wants to be better and is a little frustrated at times. I try to tell him, ‘Hey, you’re doing well. This thing is working out.’ He has high expectations. But he generally brings great energy to the park. When he has a chance to speak up, if he thinks it’s gonna help the team, then he’s willing to do that.”

Bazzana’s first month in Corvallis has served as his introduction to playing in the U.S. full-time. But that doesn’t mean he’s lacking for competition; for the past few seasons, he has been playing against grown men in the Australian Baseball League, the top professional league on the continent. With the Sydney Blue Sox, he batted .304 in 23 at-bats while gaining immensely valuable experience in a professional environment.

“One thing that helped me get recruited is that I’d been around pro guys, older guys that had been around the game a little bit longer,” Bazzana said. “So I seem maybe a little bit more mature on that end of things and the coaches really like how I communicate and talk about the game.”

Knight, who has also had a storied career coaching in the ABL with the Perth Heat, knows better than anybody what kind of environment Bazzana has been playing in during his time with the Blue Sox. He points out that there is Major League-caliber talent circulating through the league, and singled out Gift Ngoepe, a slick-fielding former big-league infielder, as somebody who might have had a major impact on Bazzana’s development while with the Blue Sox.

“Just from a maturity standpoint, those guys know how to go about their business and have a plan when they show up to the park,” Knight said. “And that’s Travis in a nutshell.”

Even with that on his resume, it was still a somewhat uphill battle to get to this point.

Bazzana has played with plenty of talented Australian players who are his age at international tournaments throughout his career, and he got his big break from a U.S. recruiting standpoint doing so at the Arizona Fall Classic, a showcase tournament featuring some of the best high school-aged players in the world, in 2019. Even on a loaded Australia team, though, he estimates that only seven or eight out of the 30 players on the roster will get the chance to play college ball in America, with most of those opportunities coming at the junior college level.

But he separated himself at that tournament and caught the eye of Oregon State’s coaching staff. The Beavers coaches had been tipped off to keep an eye out for Bazzana because of his physical tools and advanced ability to hit. But he believes it was something else that convinced them that Bazzana belonged in Corvallis.

“I just played really hard. I think that was it,” Bazzana said. “I hustled out of the box everytime I hit the ball. I was a big leader on the field. I think it was leadership, communication and the way I played the game. It was the intensity and matureness that I played baseball with that I think they really, really liked.”

Long before the trip to Arizona that banked him an offer from the Beavers, a mentor of Bazzana’s had told him to make a top-10 list of dream schools in the U.S. that he hoped to play for someday. At the top of the list was Oregon State.

After his first visit to Goss, his decision was sealed.

His commitment to Oregon State paved the way for him to join the Knights as a precursor to his Oregon State career. For now, he’s just trying to enjoy the first chapter of what he hopes will be a storybook career in Corvallis.

“Honestly, when I was younger — three or four years ago, I was watching these guys win a national championship,” Bazzana said of Oregon State. “I never even thought it would be possible to come here. It’s just everything I’ve ever wanted, and I’m just trying to take it in and make the most of every day.”

AL Wild Card Outlook: Do the Yankees have a chance?

AL Wild Card Outlook: Do the Yankees have a chance?

Oregon State’s season reached a sudden, unceremonious end earlier this week, with the Beavers coming agonizingly close to clinching a super re…

Oregon State’s deep stable of pitchers was one of the Beavers’ major strengths last season.

Knights baseball: Oregon State's Braden Boisvert making impact both at the plate and on the mound this summer

There’s a simple explanation as to why there are so few two-way baseball players beyond the high school level.

Incoming Oregon State freshman Travis Bazzana has spent time at second base, shortstop and outfield in his first month with the Corvallis Knights.

Travis Bazzana is spending the summer with the Corvallis Knights before joining the Oregon State program.

Travis Bazzana has been one of the most productive hitters in the Corvallis lineup during his first season playing in the West Coast League.

The Knights defeated Ridgefield 5-2 to earn a spot in the West Coast League playoffs.