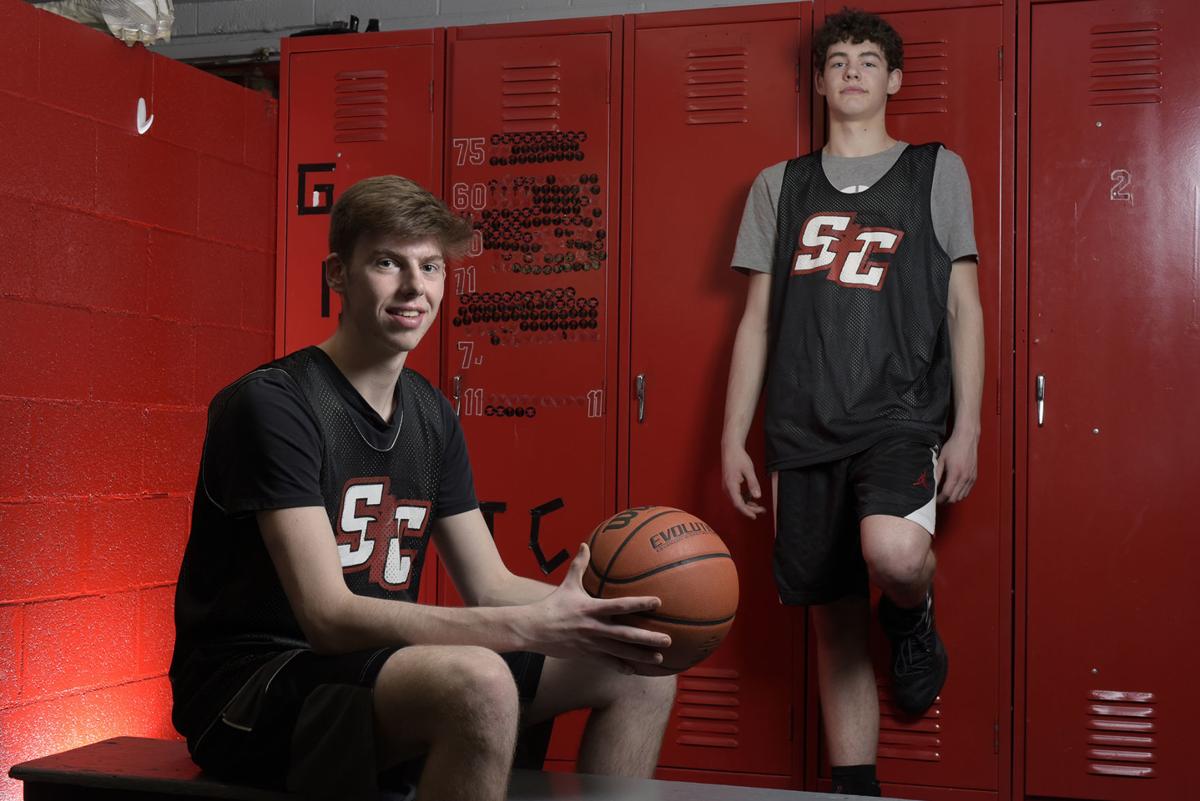 Brothers Zack Baugher, left, and Josh Baugher have been key contributors for the Santiam Christian High basketball team this season. 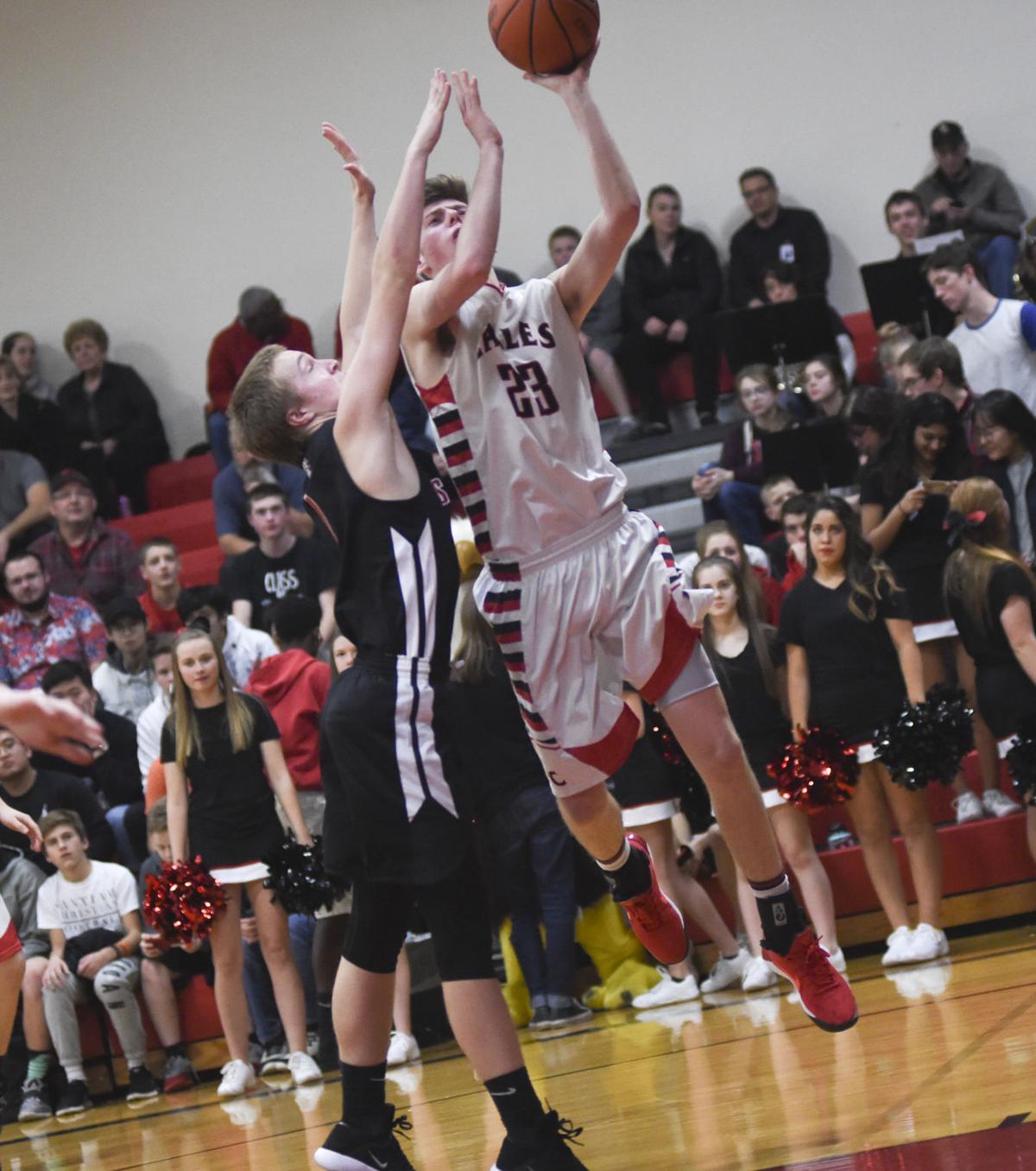 Zach Baugher goes in for a basket against Creswell earlier this season. 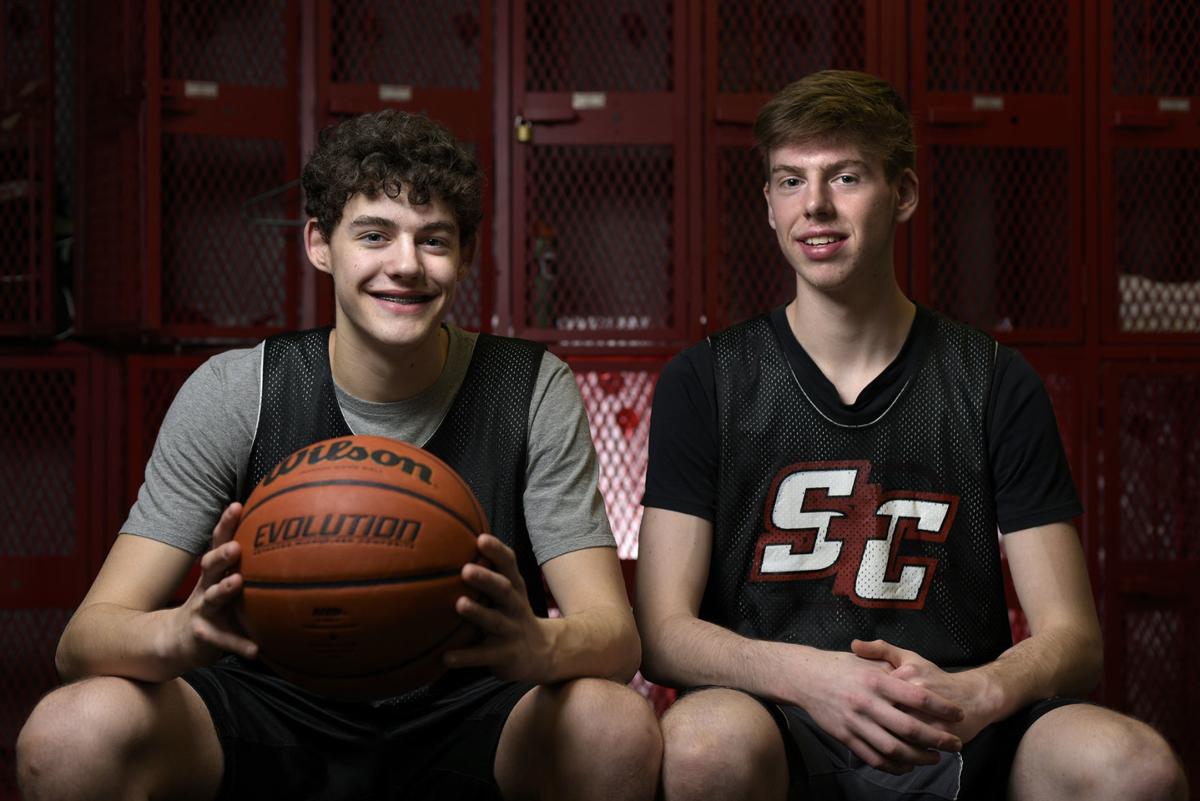 Santiam Christian's Josh Baugher, left, and brother Zack Baugher used to play one-on-one games against each other, an activity that helped them develop a competitive spirit.

Every year when the NCAA men's basketball tournament rolled around, brothers Zach and Josh Baugher could be found playing one-on-one basketball games at their home hoop.

The Baughers would watch some of the March Madness action and then go out and hit the court.

Those games weren't quick ones to 10 points or so. They would often battle to 50 points a game and play five games in a row.

As the older brother, Zach was determined not to lose to Josh. The games would sometimes get close, but it was a long time before Josh could really test Zach.

Some basketball skills were developed during those years, but it was the competitive drive that was instilled in both players that made a lasting impact. And that competitive streak was not limited to one-on-one hoops. It spilled over into board games and just about every other activity.

"We were both ultra-competitive. I always hated losing to him," Josh said. "So it just made us better. We just hate to lose on and off the court and we'll do whatever it takes to win because we just hate losing."

Those games did provide a foundation for their basketball careers, along with growing up in a basketball-oriented family.

Their father, Anthony Baugher, was a long-time coach and their mother, Cindy, also played the sport.

"They've been in the gym their whole lives," Anthony Baugher said. "Their mom played at George Fox and I coached high school basketball for over 20 years and coached college and so they've been exposed to a lot of different players, different atmospheres. I think that's really helped them a lot to solidify."

They did not specialize as younger athletes. Anthony wanted them to have a good athletic base, so they played football, basketball and baseball for several years.

Both players start for Santiam Christian. Much of the offense revolves around Zach, a 6-foot-6 junior post. Josh is a 6-4 freshman guard who shows flashes of high-level potential.

It's no surprise that Josh and Zach are both tall. Anthony is a tad over 6-7 and he said both sons might not be done growing.

"Zach last year tweaked his ankle and we took pictures of it and the growth plates weren't closed, so he can probably get another inch or two and Josh is definitely still growing," Anthony said. "You can just tell by the way he moves sometimes."

Anthony taught them guard skills from a young age so they would be ahead of the curve when they grew taller.

"Mom and dad always stressed on the fundamentals because my dad always says, it's easier to become a post than a guard, so we'd always bring the ball up as a guard," Josh said. "And now as we're getting taller and taller we're becoming posts because now we're both fundamentally sound and we can play on the wing and we can also go on the post."

This is the first season on varsity at SC for the brothers. Anthony was the athletic director and boys basketball coach at SC before leaving for Missoula, Montana, to become the superintendent at Valley Christian School.

That's where Zach played his first two seasons of high school basketball. He has already hit 1,000 points for his career and has gotten interest from Tulane and some smaller local colleges.

When Anthony took a position as executive director of the Camp Attitude Foundation, the family returned to Oregon.

"They have a lot of fundamentals down that really helps them," SC coach Dennis McLain said. "And to have a freshman like Josh starting varsity, that's a no-brainer on our part as coaches because he's very fundamentally sound and he's a great teammate and he can score the ball. He can play defense, he can do all kinds of stuff.

"Their skill development has been great. Mainly from their dad and from the coaches they had back there."

The brothers definitely have different personalities. Josh said he's a little more impulsive, while Zach thinks through his decisions.

Anthony said they are both 4.0 students and described them as model citizens off the court.

"I think they're very caring and kind. I think when they step on the court, they want to take it to ya," Anthony said. "They're extremely competitive, they get that from their mom and myself and they do a really good job of compartmentalizing both of that. They understand when they're playing a game, they're competing, there's a certain way to play it and when they're off the court they do a great job representing Christ and their family and who they are."

The brothers are enjoying the chance to be teammates this season and next.

Zach said they've always been best friends and now they can compete together.

"It's amazing," Zach said. "I think we complement each other really well. He's a great passer and he's a good player and he knows exactly where to go. We just have that chemistry that doesn't come with anything but brotherhood. We've been through a lot of stuff together and we just love each other and trust each other."

After a tumultuous couple of weeks, the Crescent Valley High boys were in need of a spark to get them going with Mid-Willamette Conference pla…

Brothers Zack Baugher, left, and Josh Baugher have been key contributors for the Santiam Christian High basketball team this season.

Zach Baugher goes in for a basket against Creswell earlier this season.

Santiam Christian's Josh Baugher, left, and brother Zack Baugher used to play one-on-one games against each other, an activity that helped them develop a competitive spirit.