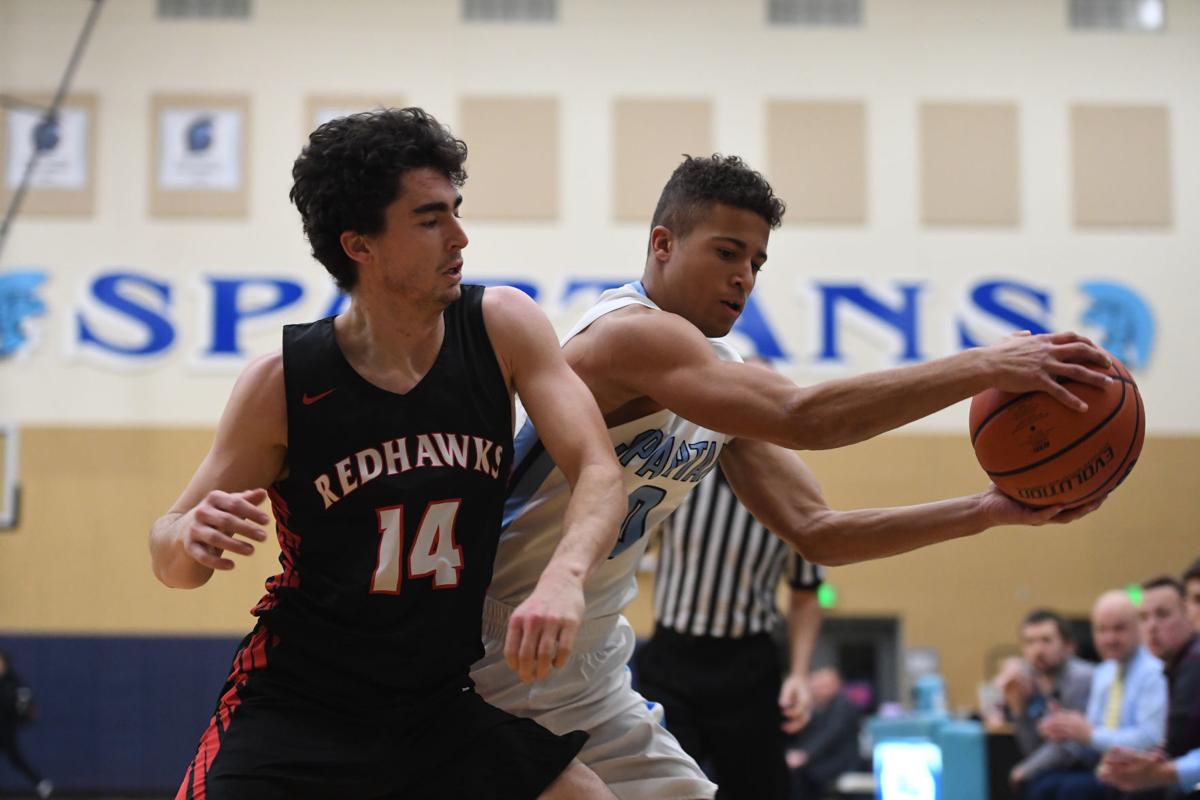 Eli Nafziger of South Albany and Maxwell Johnson of Corvallis fight for a rebound. The RedHawks held off the Spartans 85-84. 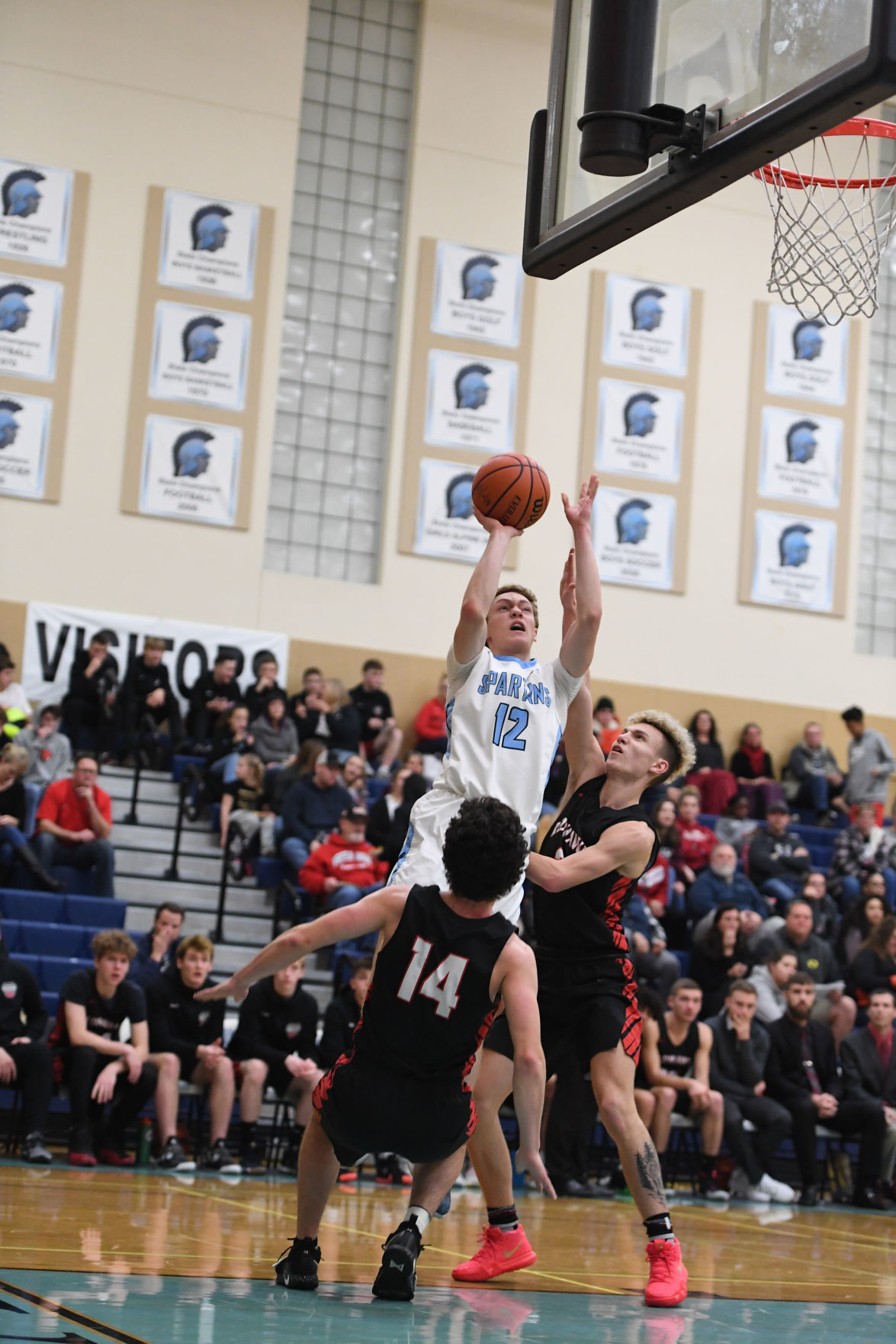 Sebbie Law of Corvallis gets off a shot during the Spartan's 85-84 loss against South Albany.

The South Albany boys shook up the Mid-Willamette Conference standings with a 85-84 win over Corvallis at Corvallis High School on Tuesday night.

In a game that featured two of the top three teams in the MWC, it figured to be a back-and-forth contest where each team would do anything to keep pace in the MWC race.

Corvallis opened the game on a high note, jumping out to 9-0 lead. The two teams traded blows for the rest of the first with CHS holding a 17-14 advantage after one.

South Albany flipped the script on the Spartans in the second, using a blend of 3-pointers and stifling 2-3 zone defense en-route to a 26-point second quarter to break the game wide open.

Thanks to the offensive outburst and timely defensive stops, the RedHawks headed to halftime with a 40-30 lead.

RedHawks’ coach Justin Smith, noted that while his team started off slow, the response they had in the second quarter was crucial.

“The big thing is, I guess I didn’t tell them when the game started because we looked five minutes late to the game,” Smith said. “It was good to see the kids respond after their 9-0 start. Once our group gets momentum going and we make some shots, get some excitement, our energy and athleticism make it so we can fly around and do a lot of things."

Coming out of the halftime break, the RedHawks picked up right where they left off, continuing their aggressive zone defense and high-percentage shots on the offensive end to take a 67-53 lead heading into the fourth. The Spartans showed fight but weren’t able to make much of a dent in the South lead.

With a 14-point lead entering the final period, South looked like they were going to keep the big lead and cruise to victory. However, the Spartans had other plans. They cut the RedHawks' lead to 75-71 with just under three minutes remaining.

South was able to pull away in the closing minutes for good as they hit clutch free-throws and got just enough stops on defense to keep the Spartans at bay and earn the 85-84 win.

Kenyon McGlothan led the way for south with 20 points, including three made three pointers. Sam Myers added 14 and Jadon Lyons-Lopez had 10.

CHS coach Ross Duerfeldt was pleased with how his group fought back and competed until the end but wasn’t happy with the amount of offensive rebounds.

“I loved our fight back into it, but we got down and ended up trading baskets for awhile,” Duerfeldt said. “We gave up around 18 offensive rebounds and you just can’t have that when you’re trying to come back.”

Balanced scoring was the order of the day for the Spartans as they had five players — Jasper Reinalda (18), Isaac Gabriel (16), Calvin Cahill (14), Noah Greenblatt (14) and Sebbie Law (10) — all reaching double-digits.

RedHawks’ senior Eli Nafziger said that going into the contest, the team saw this game as a barometer to see where they stack up in the conference.

“(CHS) beat Silverton so we wanted to use this game as a measuring stick to test ourselves on where we stood in the rankings,” Nafziger said. “We came together as a team and we all stood up to the test.”

In terms of the bigger picture for South, with the win they move into a tie for second with Corvallis, just a game behind conference leader Silverton.

“It’s a big thing,” Smith said. “CHS beating Silverton at home was a big win for them and so being able to come in here and get the win was big for us.”

Eli Nafziger of South Albany and Maxwell Johnson of Corvallis fight for a rebound. The RedHawks held off the Spartans 85-84.

Sebbie Law of Corvallis gets off a shot during the Spartan's 85-84 loss against South Albany.