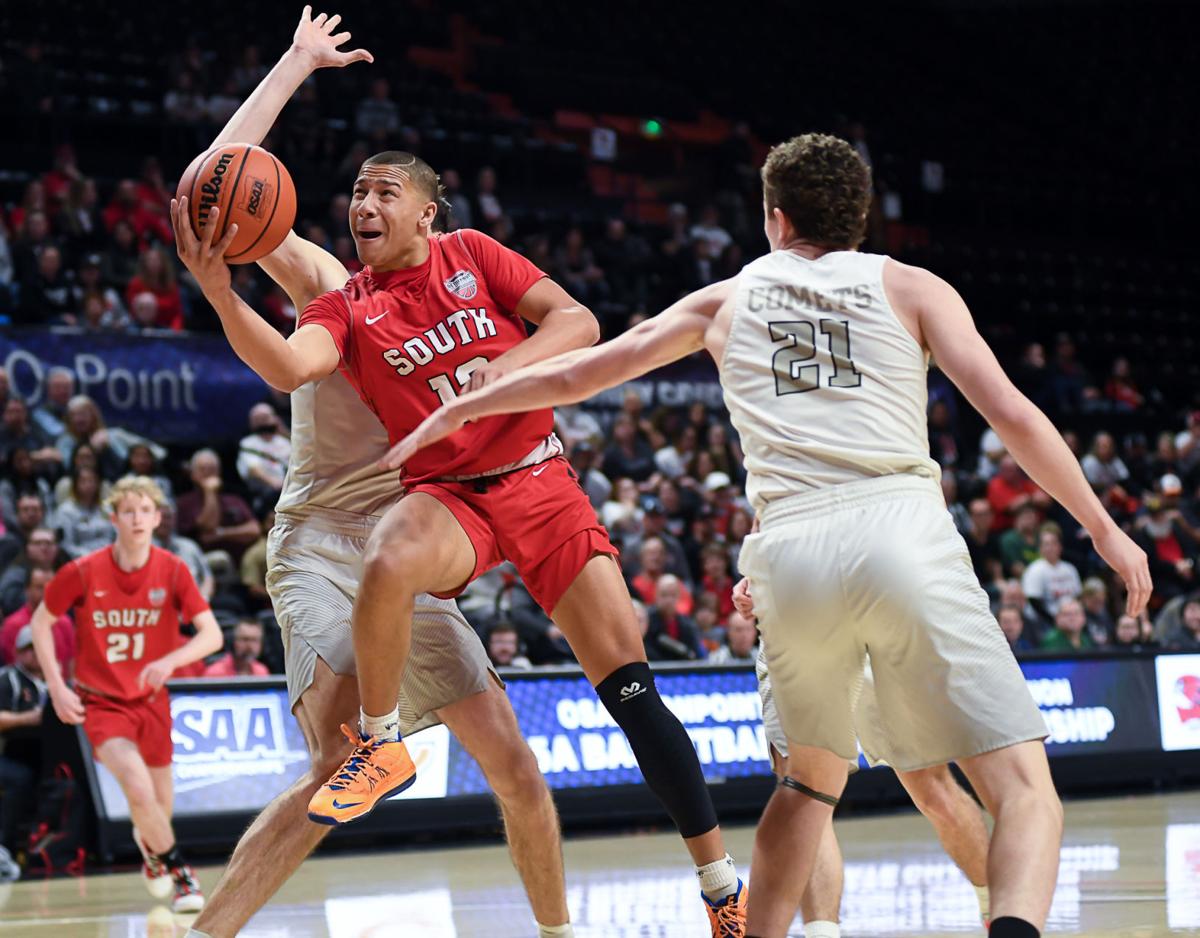 South Albany's Isaiah Gilliam was named the Mid-Willamette Conference Player of the Year in 2021. 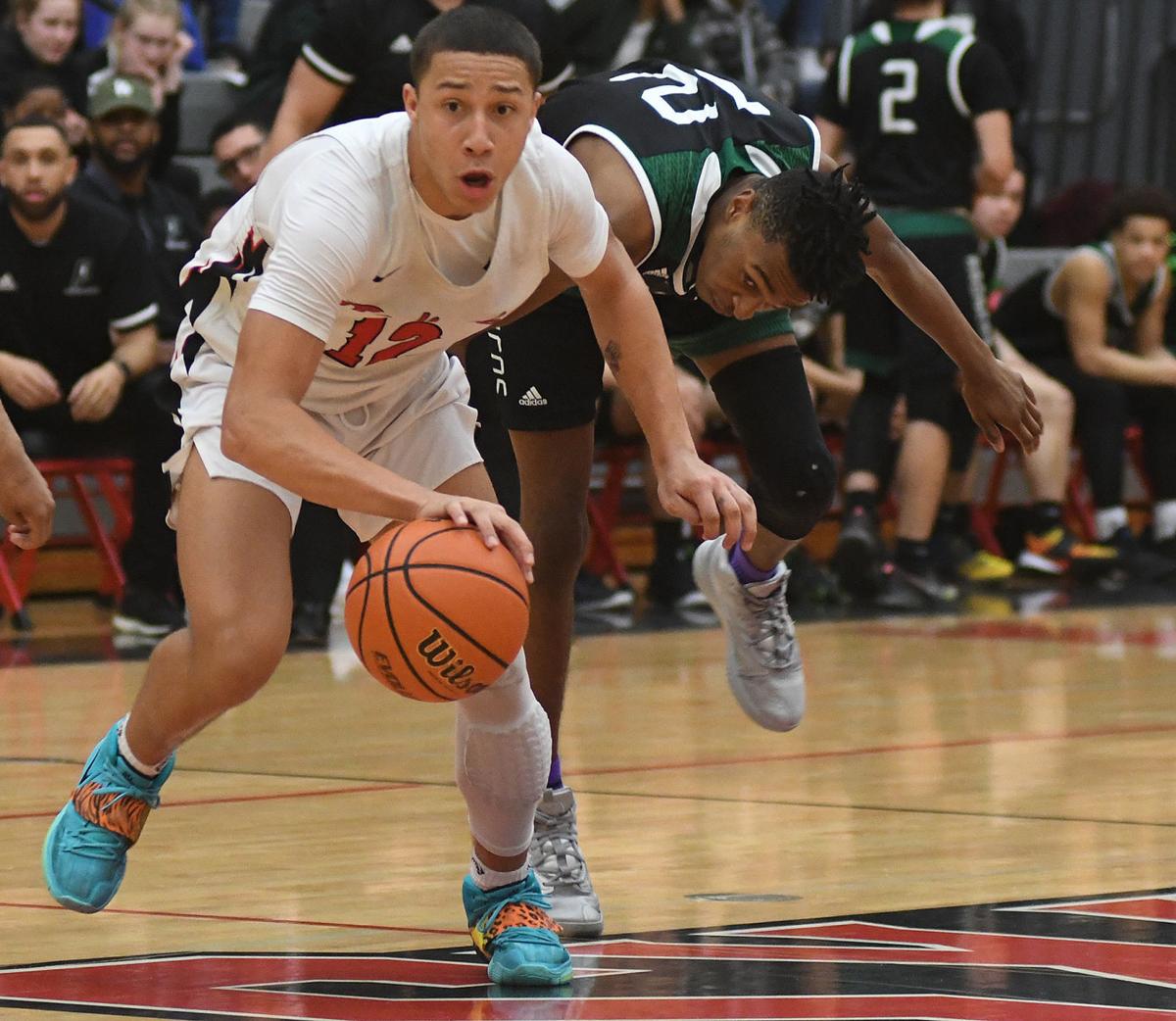 South Albany guard Isaiah Gilliam was named to the all-Mid-Willamette Conference first team as a junior in 2020.

Gilliam, South’s star point guard, led the RedHawks to the brink of a conference title in one of the toughest leagues in the state, despite being the only player on the roster who had ever suited up for a varsity game. He shredded Sprague’s diamond-and-one defense, tactfully finding ways to set his teammates up for easy buckets against a scheme that was designed to prevent him from ever touching the ball. He dropped 41 points against North Salem, rampaging to the basket for layup after layup when the Vikings opted against doubling him.

None of that is supposed to be easy, and yet Gilliam made the spectacular look routine on a nightly basis this spring.

“The thing I love about Isaiah is that I could try to talk him down after a loss, like, ‘It’s okay to be frustrated. What you’re going through is hard,” Matuszak said. “But it didn’t matter to him. He’s such a competitor, he expected to win every game regardless.”

His relentless effort to carry the RedHawks to success is what made Gilliam such a prolific scorer during his prep career, and now it has paved that way for the next chapter of his basketball career.

Last week, Gilliam signed a letter of intent to play for Clackamas Community College next season and will join a Cougars’ program that is a consistent postseason contender in the Northwest Athletic Conference.

“I’ve been waiting for this day to come since I started playing basketball,” Gilliam said. “It just felt good to finally get there with my family being there. All the support they’ve given me — it was just a great feeling all around.”

Last month, Gilliam was named the Mid-Willamette Conference Player of the Year. He averaged 22.9 points, 9.8 rebounds, 3.4 assists, and four steals per-game while leading the RedHawks to a 10-6 record and a 7-2 conference finish.

For South, those contributions on the court were irreplaceable. When put into context, they are even more significant.

During Gilliam’s junior year the team went 20-6 and was the No. 6 team in 5A before the pandemic brought their state tournament journey to an abrupt end. Most of the key contributors from that team graduated after the season, and Gilliam and Evan Benson were the only two varsity players set to return. But before the 2021 season began, Benson received a job offer that was too good to pass up and informed Matuszak he would have to miss the season.

That meant it was suddenly Gilliam’s team.

Matuszak surrounded him with a team of uber-talented players — albeit, ones who were making the leap to varsity from junior varsity, and in some cases, middle school ball.

Gilliam gave the team a consistent scoring threat and defensive intensity, but his contributions off the court were just as significant.

From organizing the team group texts to helping ensure younger players knew the schedule each week, to making sure everybody was present for film study, to leading the team through warm ups on a daily basis, Gilliam was essentially another assistant coach for the RedHawks this spring.

“We had a lot of kids who just hadn’t been around at the varsity level,” Matuszak said. “In seven weeks, he turned those guys into players who looked like they had been a part of the program for four years already. They just looked comfortable and looked relaxed, and a lot of that is due to Isaiah and his expectations every day. He’s made my job look really easy.”

Gilliam’s senior season at South will undoubtedly go down as one of the best in program history. But it nearly did not happen. For much of the past 12 months, Gilliam and Matuszak both thought that the final game of his junior season was his last in a RedHawks uniform.

Once the pandemic hit, it became apparent that high school sports opportunities in Oregon might be scarce. Gilliam was coming off a strong junior season, but he was still working for scholarship offers and couldn’t risk missing out on his senior season entirely.

He and his family began exploring the prep school route, with hopes that he could transfer and resume playing games on a regular basis. Gilliam got in touch with a few former teammates who were enrolled at Relentless Or Nothing (R.O.N.), a prep school in Inglewood, California. He was told there was an opening there that would allow him to play year-round against high-caliber opponents.

He transferred to R.O.N. last November, and at the time, thought his career at South was finished.

“I had essentially said goodbye to him and wished him luck,” Matuszak said.

Over the next three months, Gilliam was, more or less, living the life of a college basketball player. Early morning workouts, class in the early afternoon, and then more practice in the evening.

“It wasn’t like any normal high school day,” Gilliam said.

He loved the competitive environment, and credits his time at R.O.N. for helping grow his game exponentially. But the move also had its downsides.

He had stayed in touch with Matuszak and talked to him often after his games. Gilliam informed his coach that he thought R.O.N. hadn’t lined him up to receive all the credits he needed to graduate in June, and Matuszak helped him get in touch with a counselor to help him sort out the problem.

Gilliam also told Matuszak that he was starting to feel homesick and a bit burnt out. He wasn’t playing California Interscholastic Federation sanctioned games, but rather was playing for a club team that included a group of his R.O.N. teammates. It was still a tremendous opportunity, but did not come with the prestige of playing for the academy’s top team. During one stretch, Gilliam told Matuszak that he had played around 90 games in a span of 60 days.

He opted to come home to finish up his academic senior year, and soon after, the OSAA laid out a plan for a 2021 basketball season. In that sense, things could not have worked out any better for Gilliam; he got to work on his game in the winter months against quality opponents in California, and would still get his senior season at South.

But he was returning to a team that was entirely different from the one he had taken the floor with at Gill Coliseum in March 2020 during South’s last game before the pandemic.

“There were no players left from the team I first played with when I moved to Oregon in the seventh grade,” Gilliam said. “I was the only one from my grade, all the guys I grew up playing with were gone.”

Rather than focus on the difficulties of being South’s lone varsity returner, Gilliam embraced the leadership aspect of his role and also enjoyed the opportunity to play with and mentor his younger brother, DeShawn.

Isaiah and DeShawn had been dreaming about the opportunity to play together since they were little kids, and Isaiah made sure to make the most of every moment he and his brother had in the gym together.

“I think he’s gonna be way better than I ever was,” Isaiah Gilliam said. “It’s exciting to see. That’s just all I want for him. I gave him a hard time this season, and he was definitely mad at me at some points. But he knows it was all love and I just want him to be the best player he can be.”

The Corvallis girls basketball team has accomplished something that very few teams can lay claim to: A perfect season.

After two years at the helm of the Crescent Valley High football program, Mike Connor has stepped down.

Hoop Jam returns to Albany on Saturday and Sunday

South Albany's Isaiah Gilliam was named the Mid-Willamette Conference Player of the Year in 2021.

South Albany guard Isaiah Gilliam was named to the all-Mid-Willamette Conference first team as a junior in 2020.