Prep football: Corvallis High has sights set on playoffs
Share this
{{featured_button_text}}
1 of 3 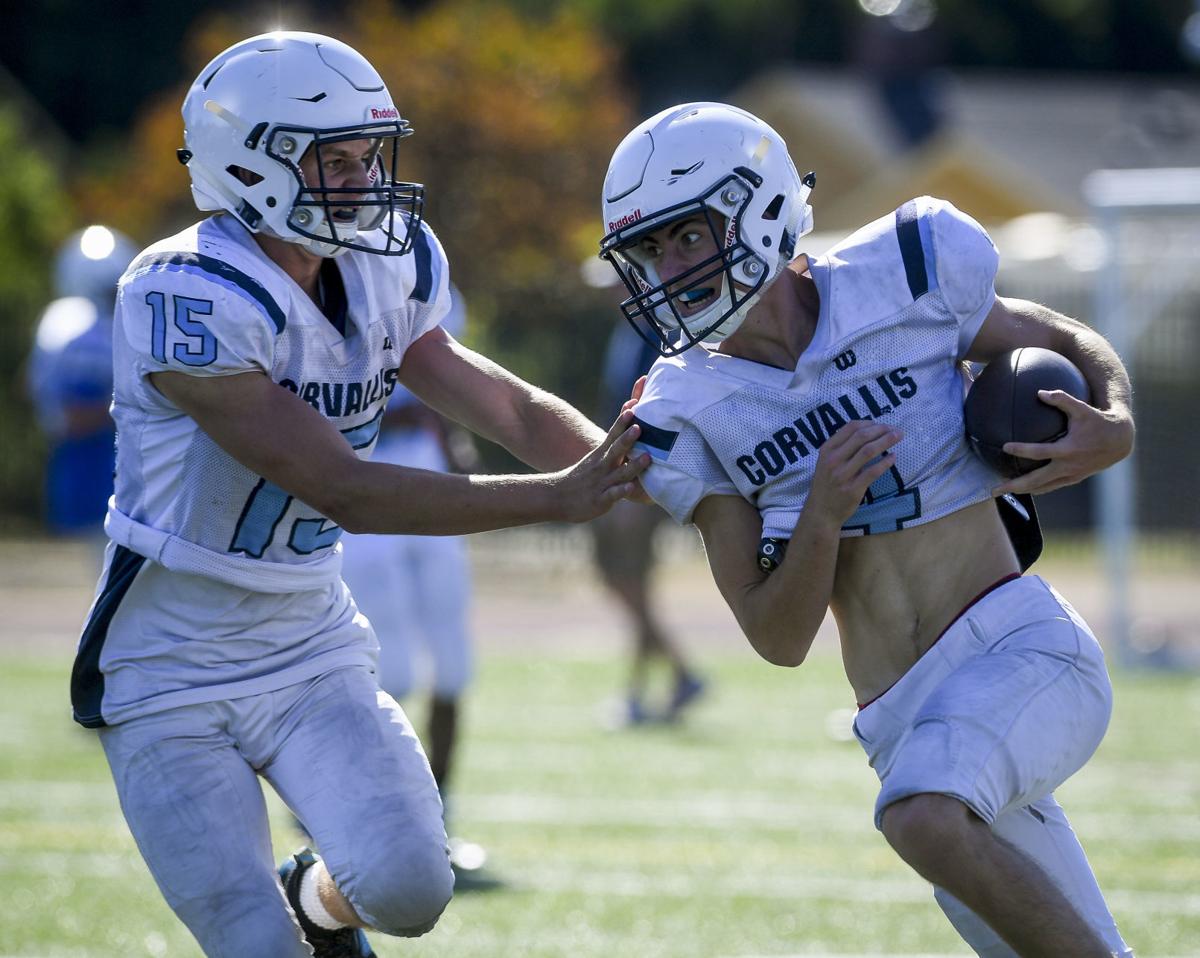 Corvallis' Ethan Hester (4) was an all-Mid-Willamette Conference honorable mention selection last year at receiver. The Spartans have their sights set on the playoffs after getting left out in 2018. 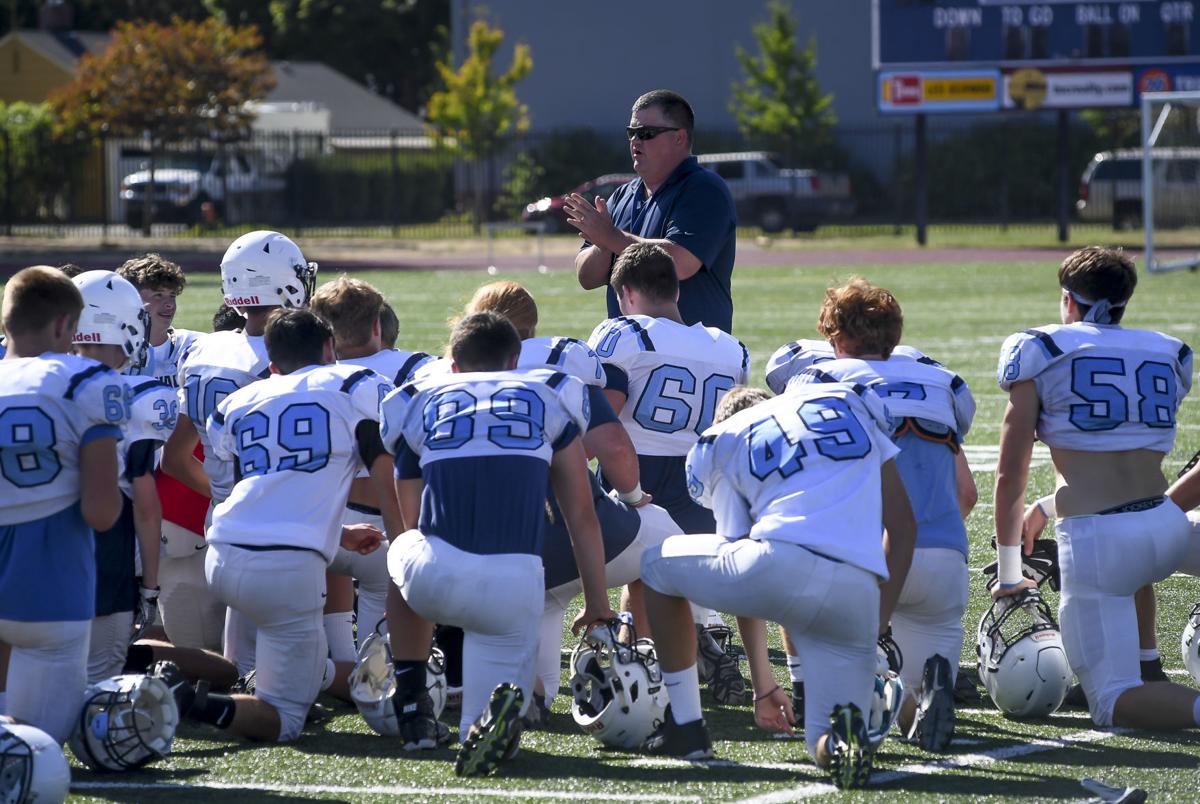 CHS coach Chris McGowan talks to the Spartans at a recent practice. 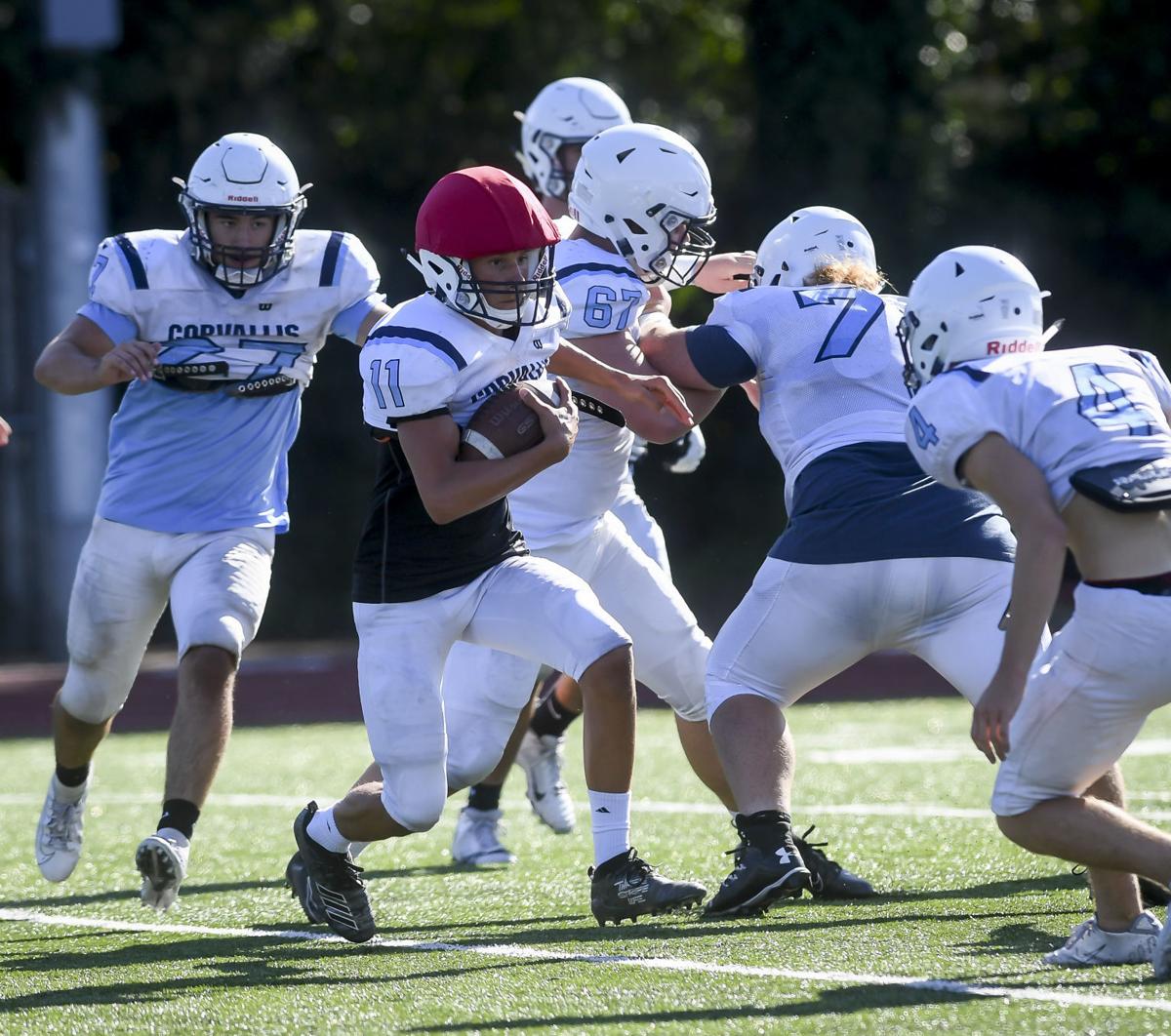 Ireland McFadden is expected to contribute at receiver for Corvallis High this season.

The Corvallis High football team was left disappointed with the outcome of the 2018 season.

The Spartans said they let a few winnable games slip away — and one in particular still bothers the teams senior players.

A 17-15 loss to McKay — which went winless throughout the rest of its schedule — was ultimately the difference between the Spartans making and missing the playoffs.

“They weren’t looking good for awhile,” senior wideout Ethan Hester said. “We just totally thought they would be garbage and took a week off pretty much. Got into the game and just got ran over.”

It was a wakeup call for the Spartans, who played a close game with state semifinalist West Albany the next week, and then finished off the season with two blowout wins. Even though that effort was too little, too late to get them into last year’s playoffs, the lessons learned from the McKay game have paid dividends throughout the summer.

The Spartans seniors are playing with a sense of urgency and believe they have all the necessary pieces to compete for a postseason spot this fall.

“I’m dying to make the playoffs,” Hester said. “I definitely think we can this year. I think we should have last year, too. But we didn’t prepare for teams as hard as we should have. We kind of underestimated them. We realize that we did that last year and we aren’t going to let that happen again this year.”

Hester and senior running back Izaak Worsch — both of whom earned honorable mention all league honors in 2018 — will carry plenty of responsibility for a Spartans offense that graduated a ton of talent at the skill positions. They will hope to lead by example as Corvallis works in a new starting quarterback and fairly young offensive line.

“I think we’re better than last year,” Worsch said. “We lost a lot of seniors but we’ve also got a lot of good young guys coming up this year. I think we can make the playoffs this year — I think that’s everyone's goal. We don’t want to go 4-5 again, we want to win as many games as possible.”

Last season, Corvallis quarterback Logan Steeves had the luxury of spraying the ball around to a pair of all-league receivers in Max Johnson and Kelly Kingsmill. But all three of those players, along with all-league lineman G.W. Fulford, are now graduated.

Taking over the quarterback spot will be Steeves’ younger brother, Carter Steeves. A sophomore, the younger Steeves won the quarterback battle between he and fellow 10th-grader Garrett Holpuch. Corvallis head coach Chris McGowan said the Aug. 30th jamboree helped determine who the Week 1 starter would be, but also noted that both players could see time throughout the season.

He said there are some definite similarities between Carter Steeves and his older brother.

“They’re both very smart and make good decisions,” McGowan said. “And of course, I don’t have a history with Carter as far as watching him play at a higher level. But in the jamboree, I don’t know that he threw more than one or two incomplete passes the whole time. Just took really good care of the ball. He’s still learning, of course. But he’s done a really good job.”

Even with Johnson and Kingsmill now departed, the Spartans should have plenty of talented targets for whoever is throwing the ball. Hester could be one of the top wideouts in the league, and Ireland McFadden, a senior who earned all-league honorable mention honors in 2018, is somebody Corvallis players and coaches are very excited about.

“He’s going to be a very big surprise for a lot of people,” McGowan said. “He’s gotten faster. He’s a competitor — kind of a quiet guy who is just going to do his job. He blocks well; when he’s not getting the ball he’s going hard blocking people.”

Senior Cade O’Brien will lead a somewhat inexperienced group of linemen and will be a key player in the trenches for the Spartans on both sides of the ball. Sophomore Weston Tucker will start along the offensive line for Corvallis and could provide some much-needed strength for an offensive front that is pretty small.

“He’s a big guy and he’s strong,” Worsch said. “And from what I’ve seen this summer, I think he’s going to go out and dominate kids.”

Eric Wise and Brady Hankins both earned honorable mention all-league honors as sophomores last year. Along with Colton Larcom, they could be impact juniors on both offense and defense.

The Spartans will find out right away just how much better this year’s squad can be than 2018’s; they travel to face Lebanon on Friday and will test themselves against a Warriors team that was tabbed as the No. 6 team in Class 5A in the OSAA preseason coaches poll.

“I just think that we have to buy into what our coaches are trying to preach to us,” Hester said. “If we buy into that, we're gonna have a really good year.”

Corvallis' Ethan Hester (4) was an all-Mid-Willamette Conference honorable mention selection last year at receiver. The Spartans have their sights set on the playoffs after getting left out in 2018.

CHS coach Chris McGowan talks to the Spartans at a recent practice.

Ireland McFadden is expected to contribute at receiver for Corvallis High this season.