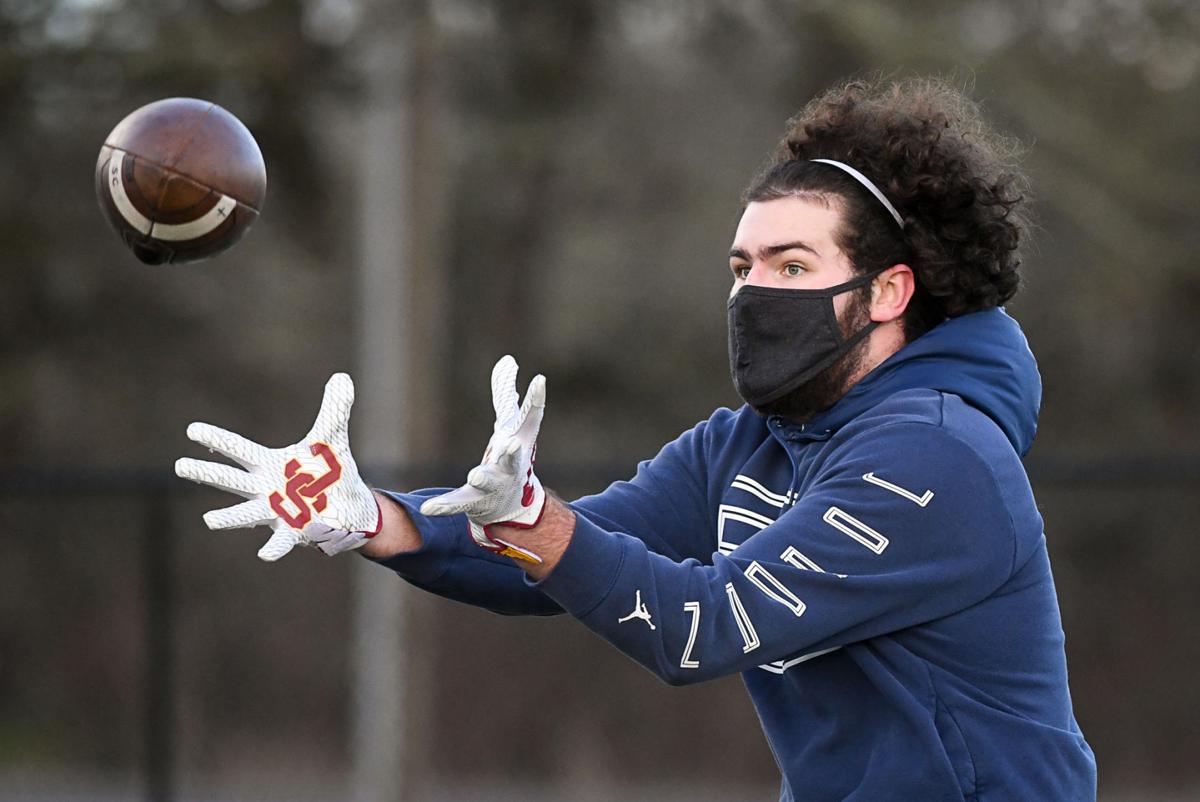 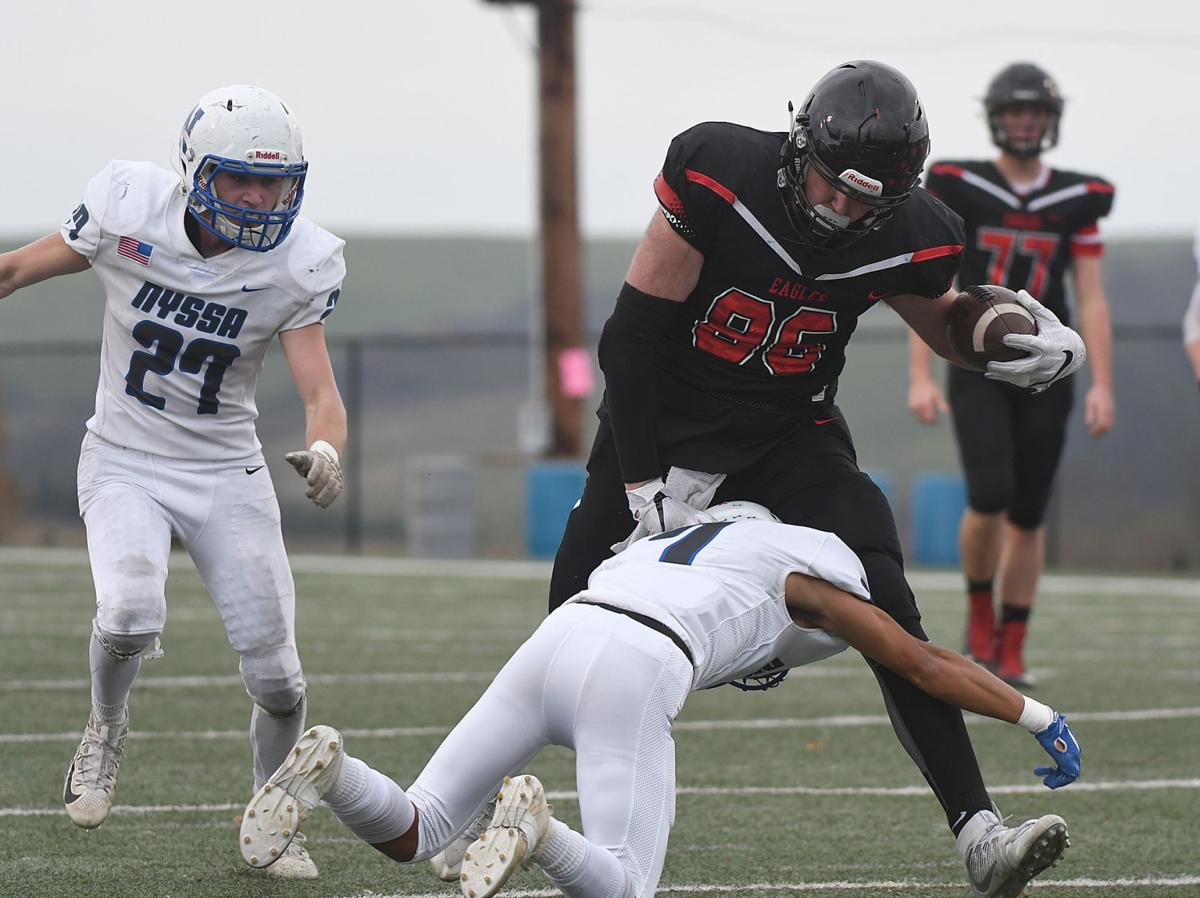 Joe MaQatish and Santiam Christian won a 3A football state title in 2019.

It didn’t matter that prior to his junior year at Santiam Christian, Joe MaQatish had never played a down of high school football.

It took only a few weeks worth of game tape for college coaches to discover the uber-athletic 6-foot-8, 240-pound tight end hidden away in Adair Village and begin daydreaming about how he might fit into an offense.

The college offers came pouring in during the state playoffs in 2019, and if MaQatish and Santiam Christian gets to play a season this spring, offers are sure to keep coming from bigger, more prominent schools.

“He was so devastating up there blocking last year and didn’t even really understand what he was doing yet,” SC coach Matt Bain said. “He was dangerous because of his size. But he’ll be a whole different animal this year. I think his stock will go nowhere but up.”

The athleticism and talent MaQatish flashed while learning the game on the fly as a junior was enough to earn him an offer from Northern Arizona University out of the Big Sky conference. He signed with the Lumberjacks in December and was thrilled to join a program that displayed so much faith in him.

Now, he wants to reciprocate that faith. Even if bigger schools do come calling, MaQatish is dead-set on spending his college career in Flagstaff and rewarding the Lumberjacks’ coaching staff for taking a chance on him.

“I have the mentality that if you didn’t want me back then, I’m going to go with the people who rocked with me from the start,” MaQatish said. “I know that’s a different way to approach it — I still have a lot to improve on. But I think that what (Northern Arizona) saw in me is what they’re about to get. I’m 100 percent with NAU and have been from the start.”

When college programs first took notice of MaQatish, he was somewhat of a diamond in the rough. By the time he arrives on the NAU campus, he might be the gem of the Lumberjacks' recruiting class as his football talent continues to catch up with his athleticism.

MaQatish took a visit to Iowa State during his junior season, and was talking with UCLA, University of Central Florida and Fresno State as well. He grew up a Beavers fan and also took a visit to Oregon State. But none of those schools ever gave him an offer.

It might have been a different case if the pandemic had not wiped out his senior season. Because while college coaches saw plenty of potential in MaQatish, they also saw a raw player who had not played the game since middle school. He has poured countless hours into the game since then, and is determined to show college coaches that he is much more than just a raw athlete.

"Last year he probably only ran two pass routes. We were just keeping things simple," Bain said. "Whereas this year, we can do a whole lot more. He'll be a way better blocker, but he's going to be a much better receiver, too."

While he was growing up, MaQatish thought his path to college sports would come on the basketball court. He was 6-6 as a freshman at Lebanon High before transferring to SC his sophomore year, and he played on the AAU circuit with International Elite, a travel team out of Portland.

He played football in middle school and desperately wanted to continue playing, but his father, Mo, thought the game was too dangerous and wouldn’t let him once he reached high school.

The first time Bain saw MaQatish walking through the halls at SC, though, he launched an all-out effort to get him into football pads.

“I saw him and was like, ‘What in the world, he’s not playing football?’” Bain recalled.

MaQatish was good friends with Bain’s son, Heston, and the two played basketball together at SC. That led to plenty of conversations in the bleachers at basketball games between Bain and the elder MaQatish as he tried to convince him that Joe would be safe playing football.

During SC’s run to the 2019 state basketball title in Coos Bay, the two spent days talking about the subject, and Bain finally got the blessing from MaQatish’s father for Joe to play.

MaQatish did not train with the football team the summer before his junior year, though, and described his first couple weeks of football practice as “being thrown into the fire.” But one thing he didn’t need to adapt to was the physicality of the game.

“The first time I put pads on was for the jamboree,” MaQatish said. “I knew that I was bigger than everybody else, but I didn’t really know what was going to happen. So I just went out there and was trying to hit dudes as hard as possible.”

It wasn’t until a few weeks into the season that MaQatish even broke into the starting lineup on offense. He was playing on an SC team that rattled off a 13-0 record en route to the 3A state title, and the Eagles outscored opponents 124-0 during the first three games of the year.

Earning starting reps as a newcomer on that team was never going to be easy, no matter how athletically gifted MaQatish was. But he began to pick up on the nuances of the game at both tight end and defensive end as the season went on.

By the time the Eagles played their final game of the regular season against La Pine, MaQatish delivered a moment that made it apparent things were starting to click.

“On the first play of the game, he down-blocks on a linebacker and the kid does a literal somersault backwards,” Bain recalls. “It was just a thing of beauty. It was like, ‘Oh, okay. That is what you’re capable of.’”

Since the 2019 football season ended, MaQatish has been working to improve his explosiveness and route running, and said he is much, much more comfortable with the pass-catching responsibilities of the position than he was when he first started playing.

He wants to hit the ground running when he arrives at Northern Arizona, and will be joining up with a coaching staff that he already has a strong bond with thanks to some local connections.

NAU’s staff first discovered MaQatish when they saw his football highlights on Twitter, and they immediately started recruiting him. The first call came from Lumberjacks' tight end coach Robin Pflugard, who coached wide receivers at University of Oregon in the mid-2000’s.

His son, Aaron Pflugard, is NAU’s offensive coordinator and played receiver for the Ducks after starring at Sheldon High in Eugene.

MaQatish and Robin Pflugard hit it off instantly while discussing their local ties, and Northern Arizona aggressively recruited MaQatish as his stock rose. Now, the biggest problem the Pflugards might have is keeping MaQatish on the offensive side of the ball; he has received recruiting interest as a defensive end, too, and there are some on the Lumberjacks' staff who would love to see him as an edge rusher.

“The first call after NAU offered me, (Robin Pflugard) was like, ‘I’m keeping you away from our defensive line coach — I don’t want him taking you away from us!’” MaQatish said with a laugh.

He and the rest of SC’s players are optimistic that they will get a senior season, and they have been going through non-contact workouts a few times each week in order to stay ready. But it is entirely possible that the next football game MaQatish plays will be at the college level.

Either way, he is thrilled for the wild journey that has reconnected him with the sport, and is captivated with finding out just how far football can take him.

“Last year was just scratching the surface for me,” MaQatish said. “Just to know that I’m able to do these things out on the field right now. But if I really invest in myself, I could be so much better than I already am.”

Chance Lamer knows just how significant it would be to win a fourth state title.

Oregon State had already managed to sign the top quarterback in the state in its 2021 recruiting class.

Jonathan Smith can’t think of much more he and his staff would have wanted to accomplish during the 2021 recruiting cycle.

Some clarity was provided Monday as to how high school sports in Oregon might shape out during the rest of the school year.

Joe MaQatish and Santiam Christian won a 3A football state title in 2019.