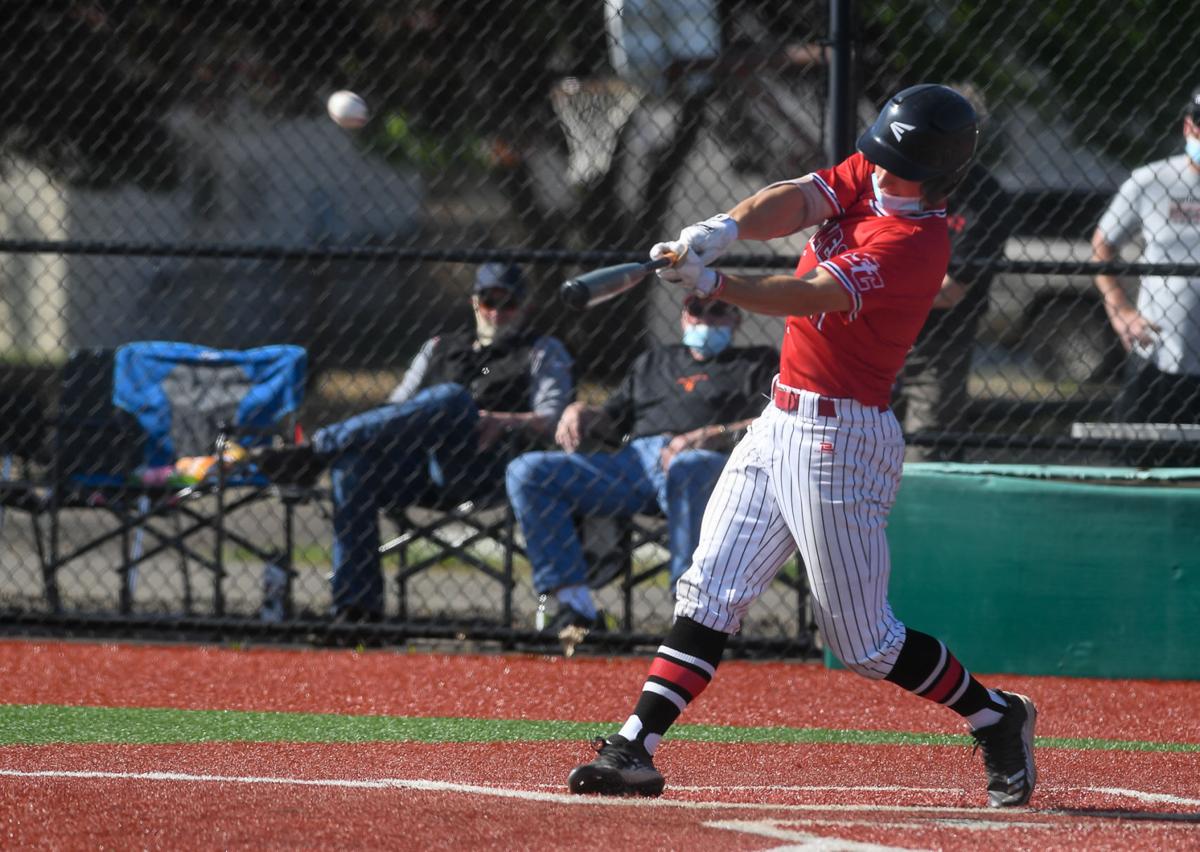 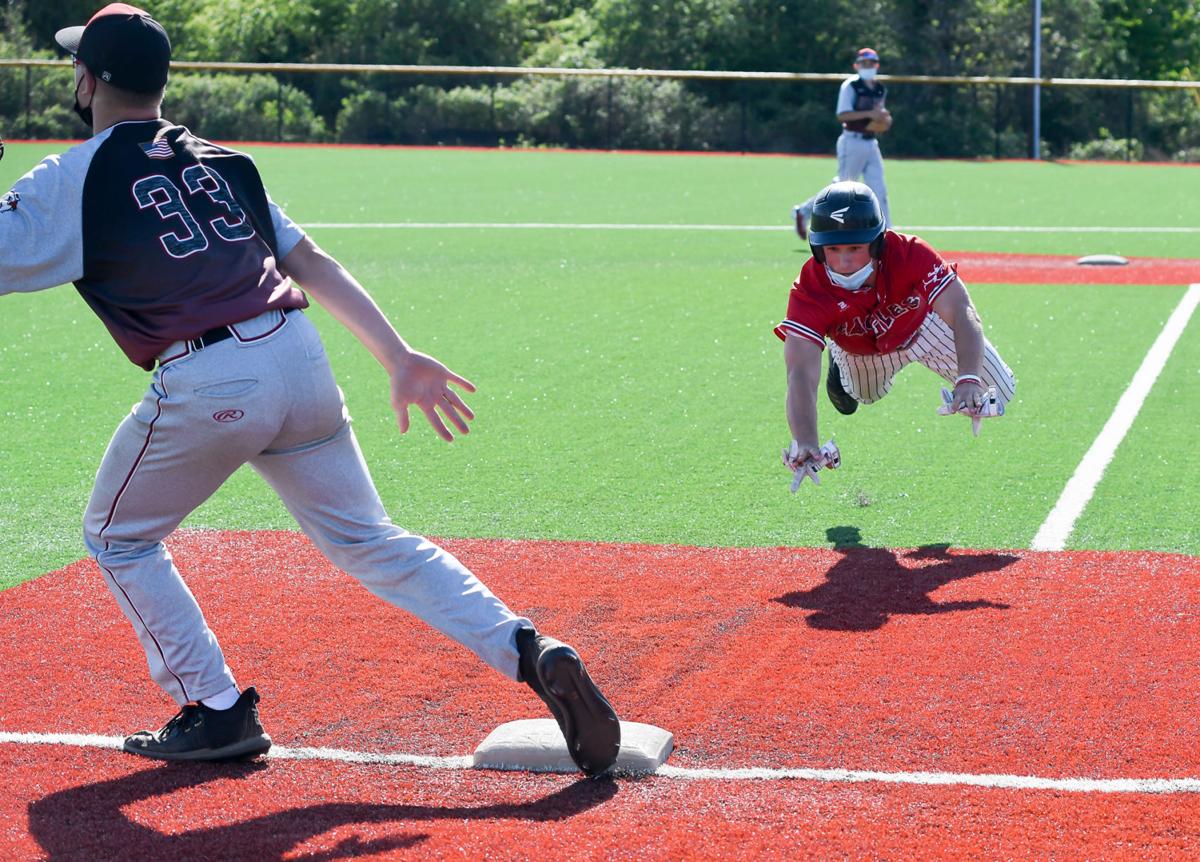 Kennel dives head-first into third base against Creswell. The throw went into the dugout and Kennel was awarded an extra base. 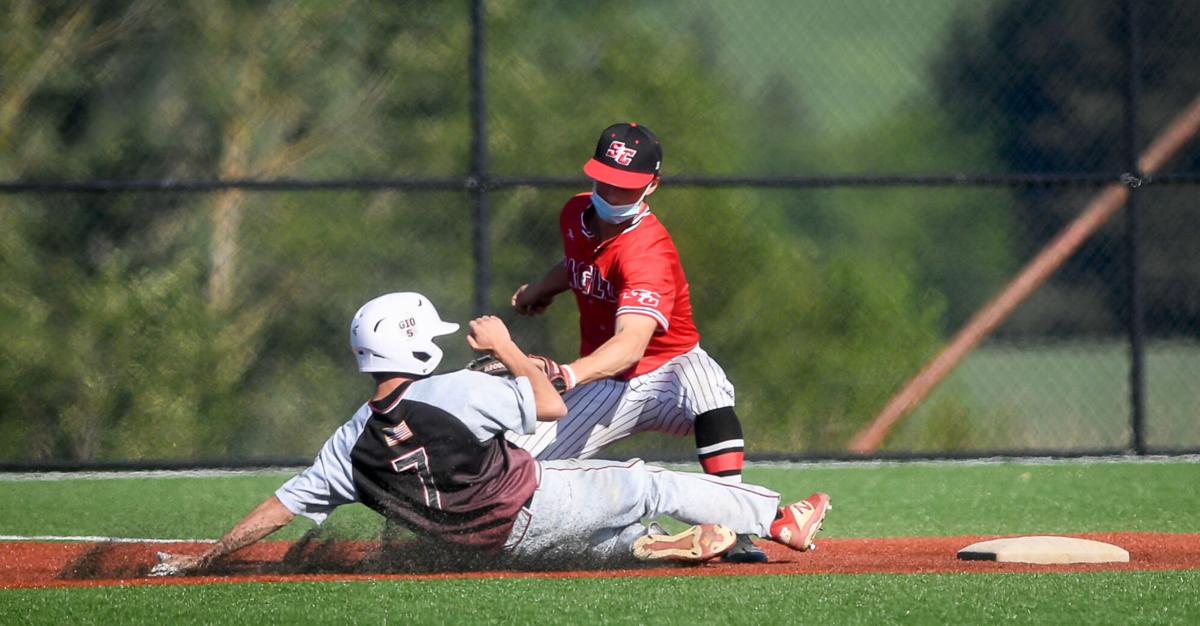 Santiam Christian's Ely Kennel tags out a Creswell player at second base. Kennel plays shortstop with the Eagles and plans to play up the middle defensively in college. 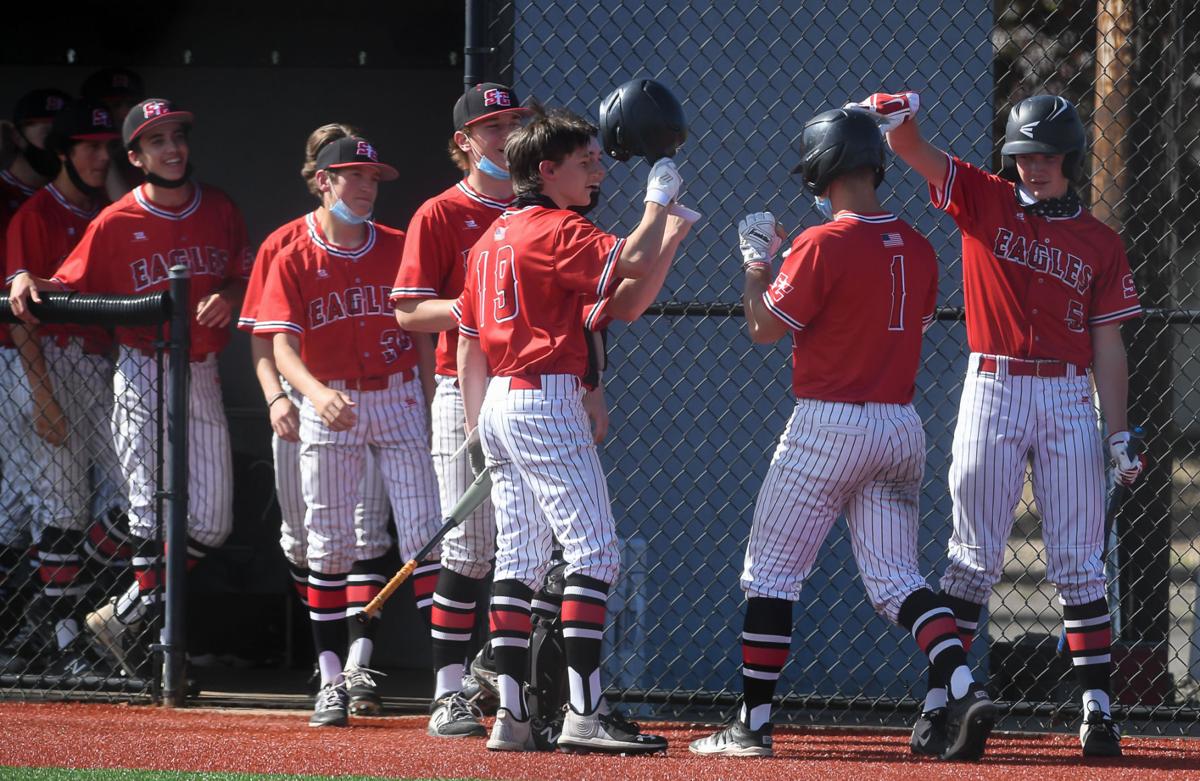 Santiam Christian's Ely Kennel is greeted by teammates after scoring against Creswell after hitting a deep fly ball that was dropped. Kennel describes himself as an introverted person and leads primarily by example.

ADAIR VILLAGE — By all accounts, Ely Kennel has worked diligently to be considered one of the top high school baseball prospects in the state of Oregon.

Those around him say the time the Santiam Christian High junior puts in and the example he provides rubs off on his teammates.

A middle infielder, Kennel points to his father, Jeremy, a fifth-generation grass seed farmer with a farm off Oregon Highway 99W near Suver, for teaching him what hard work is all about.

“Definitely my dad instilled that in me,” Kennel said. “We come from a farm family, so it’s really important to him. He kind of shows me how to work hard and earn your way.”

He keeps a busy schedule, with year-around baseball activities while also dedicating time to football, where he’s an all-state quarterback. He led the Eagles to the OSAA 3A football title as a sophomore in 2019.

But baseball is Kennel’s primary sport and it takes up most of his free time.

While playing football in the fall before the pandemic, Kennel also played in a league in Portland on the weekends.

In the winter, he plays in tournaments in other states. In the spring, he’s on the field with Santiam Christian. The Eagles are currently 7-2 overall and 6-1 in league play. In the summer, he’s on a California-based squad that plays all over the country.

The first thing longtime Santiam Christian baseball Matt Nosack noted when asked about Kennel is that not only is he the team’s best player, but he’s also the hardest worker.

“As far as mentality, attitude and approach, he’s one of the best we’ve ever had. He brings it every day,” the coach said.

Nosack singled out a play in the Eagles’ Tuesday home game against Creswell to prove his point. Kennel hit a deep fly ball to center fielder that the defender got under but dropped and had to chase down. Where others may have jogged up the first base path believing an out would be made, Kennel scored on the play.

“He’s busting it, the guy drops it and it turns into going all the way around,” Nosack said. “He gives everything every play. I’ve never seen him not run a hard 90 (feet to first base). Never seen him pout, sort of halfway stuff. He’s there every day with a great mentality and a great approach.”

Nosack says Kennel is different than other highly skilled players who compete on travel teams in that he doesn’t have what the coach calls an “elitist mentality.”

“He’s always hustling hard. He’s definitely moving at a good pace no matter what he’s doing,” said senior catcher Logan Beem, adding that Kennel can make working hard with the team enjoyable. “A lot of guys know he’s up here in the offseason all the time working. That definitely shows to some of his character. He’s definitely a hard worker especially when he has a goal that he’s working for.”

That goal is Division I baseball.

Last May, he committed to play baseball at Oregon State, which he says has been his “dream school” since he started playing the sport at a younger age.

“So I’ve always had my goal there,” said Kennel, who plans to sign with the Beavers in November.

But his first scholarship offer came from Cal State Fullerton, where former Oregon State standout and Beavers undergrad assistant coach Andy Jenkins is now in his second year as a volunteer assistant.

“Once Oregon State offered I knew that was what I wanted to do,” he said.

Kennel’s first position with Santiam Christian is shortstop, though he’s also done some pitching. His primary spot on his club teams is second base.

Kennel said in talking with OSU assistant coach Ryan Gipson, the Beavers want him to play up the middle. But if it means getting to play, he isn’t opposed to heading to the outfield.

In preparing for playing at the collegiate level, Kennel says he isn’t focusing on one aspect but rather “polishing” his skills. But if there’s one area he works on the most, it’s hitting. He has a batting cage at home, which he uses almost daily.

But first he has a high school career to finish.

Kennel praises the Eagles’ coaches for the time they spend with him on the field helping him get better.

As a leader with his teammates, he does it more by his actions than his words. But the quarterback in him takes care of the rest.

“I would probably describe myself as an introverted person. I’m an only child so I don’t talk a ton in practice, but I’ll be vocal when I need to. I’ll speak up when I need to,” Kennel said. “But I definitely try to lead by example by my attitude and energy and body language. That’s a big thing.”

Too many early errors and other mistakes in the end created a cushion that had West Albany High on the wrong end of the score.

Saturday’s Philomath Invite was the place to be to see athletes fill up the 4A track and field season-best lists.

McKenzie Kosmicki was at the top of her game Friday.

Making uncharacteristic mistakes on top of struggling to gain traction against a quality pitcher Monday put Crescent Valley High in an uphill battle.

Coming into Monday’s district tournament, the West Albany High boys golf team had one goal in mind: break a team score of 300.

Inaugural baseball league creates opportunities for those with area ties

Austin Crowson is happy to be getting back to a baseball field after two years away.

Competition for high school sports usually held during the winter in Oregon begins this week, bringing its own set of pandemic-related challen…

Kennel dives head-first into third base against Creswell. The throw went into the dugout and Kennel was awarded an extra base.

Santiam Christian's Ely Kennel tags out a Creswell player at second base. Kennel plays shortstop with the Eagles and plans to play up the middle defensively in college.

Santiam Christian's Ely Kennel is greeted by teammates after scoring against Creswell after hitting a deep fly ball that was dropped. Kennel describes himself as an introverted person and leads primarily by example.