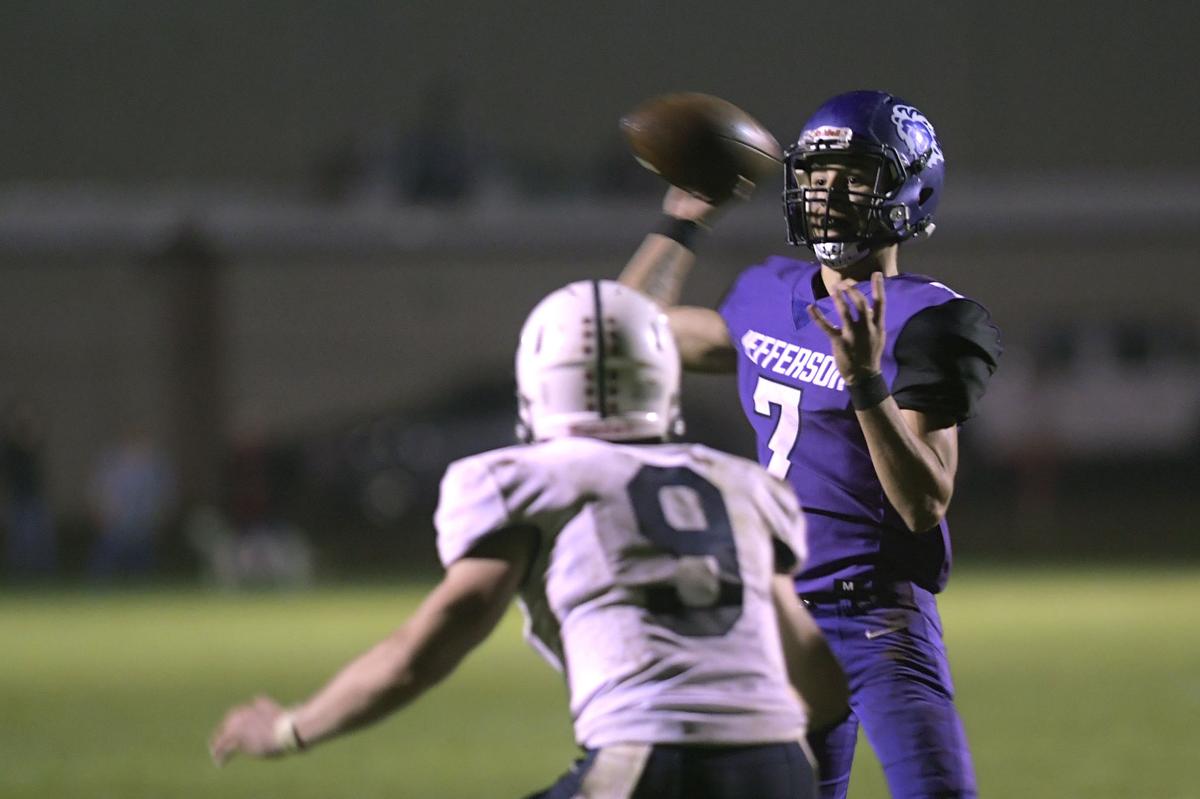 Jefferson quarterback Jace Aguilar throws a pass while Monroe's Brody Ballard defends. Aguilar and the Lions host Creswell on Thursday with a chance to move into a tie for first place in the league standings. 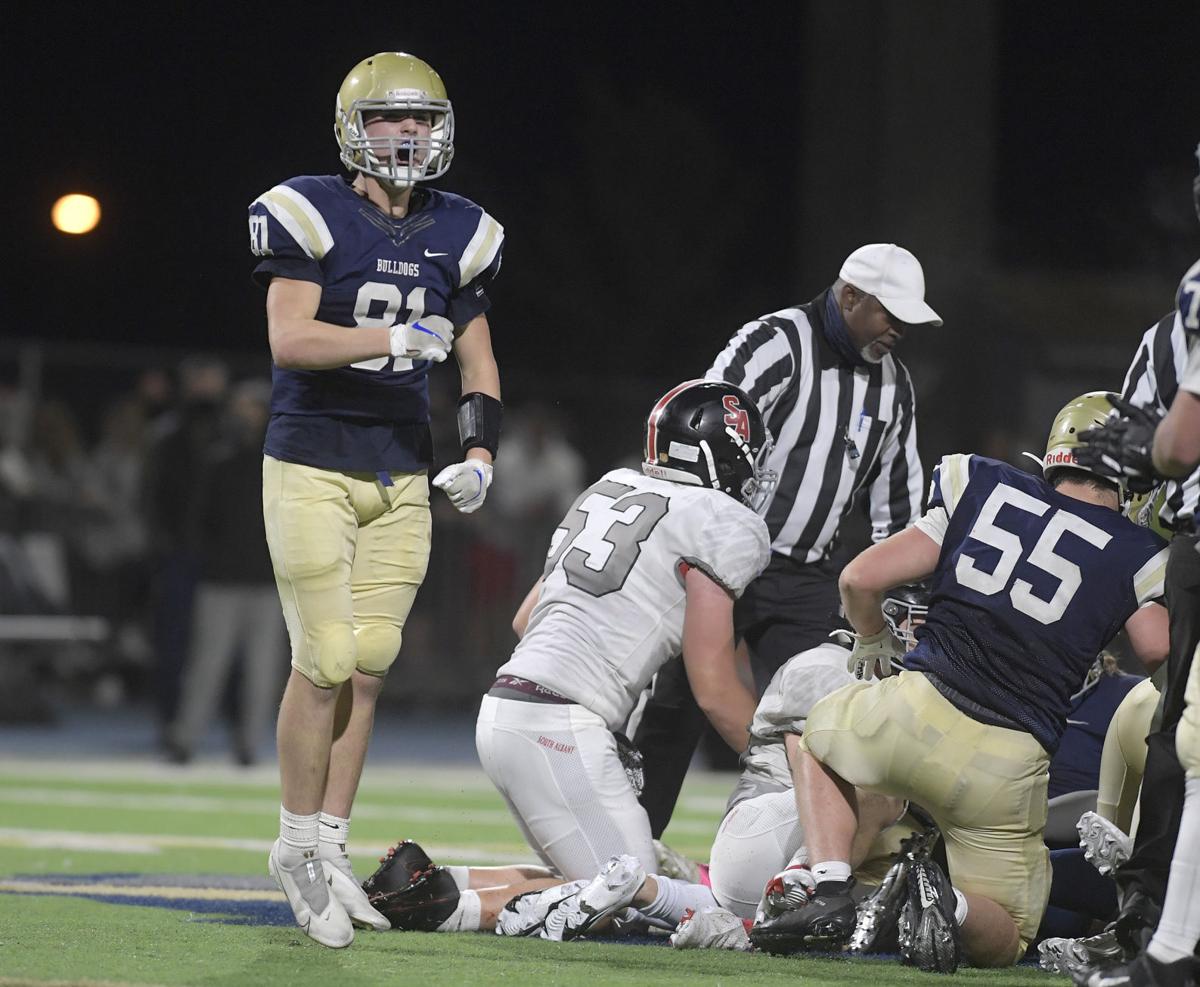 West Albany's Ashton Cavender (81) celebrates a stop on fourth down. The Bulldogs' defense has been stingy in the second half this season and will face a big challenge against Silverton on Friday.

Jefferson will get to play Creswell after all, with the Lions’ earlier defeat by forfeit due to COVID protocols erased and this week’s league game with Central Linn canceled. League representatives met last Saturday and decided to change the schedule because of the playoff implications of a Jefferson-Creswell matchup.

That puts the Lions tied with No. 7 Oakland and just a half game out of first place in the district behind No. 6 Toledo.

Jefferson has won two in a row, including last Friday’s 44-34 home victory against Monroe behind four touchdowns from Zach Wusstig. Creswell has lost three straight after starting 4-0.

The Bulldogs have trailed in the third quarter of four of their seven games but find themselves undefeated. They’ve scored three combined points in their last two first halves but are still within reach of a conference title.

“We’re just kind of a battle-tested team. Six of our seven games have been fighting through a lot of adversity. Tonight was another night that way,” West coach Brian Mehl said after last Friday’s 29-13 home win against South Albany in which the Bulldogs trailed 7-0 at halftime. “I think when you play close games, these kids understand that we can find a way to overcome that. We’ve proven it six of the seven games. I think it gives you confidence when you’re in those moments.”

Silverton will test that confidence. The Foxes, who took 6A No. 3 Tualatin to the wire in a 35-28 loss back on Sept. 10, have blown out teams that the Bulldogs struggled to get past.

Among four common league opponents for Silverton and West, the Foxes are a combined plus-70 in point differential.

The Warriors’ 34-14 home win against Dallas last week put them alone in third place in the Mid-Willamette with two games left. The conference gets three spots in the OSAA 16-team 5A state playoff bracket and could receive one or more of the four statewide at-large berths based on the final power rankings.

CV scored its most points (14) in the past three games last week but couldn’t keep up with Central.

Corvallis will try to play spoiler and put a dent in the Dragons’ playoff possibilities.

The Spartans would have to get through Dallas and West Albany to have a chance. With Central next week, the Dragons need two wins and then hope their power ranking is good enough if they don’t finish third or better in the conference standings.

Coming off two straight losses, the Huskies can improve their playoff chances before closing out the regular season next week hosting No. 2 Cascade.

Woodburn has been involved in five shutouts, twice going scoreless and three times holding opponents without a point. The Bulldogs lost 37-0 at Stayton last week.

After playing five of seven on the road, the Warriors get their last two regular-season games at home. Philomath, which hosts Taft (1-4, 0-3) next week, needs one win to reach the state playoffs.

Dayton has received forfeit wins against Taft and Scio the past two weeks. The Pirates have scored 38 or more in four of five games.

The Loggers can put the disappointment of three straight forfeit defeats behind them. Scio last played on Sept. 24, defeating visiting Douglas 38-0.

Taft, which lost 34-20 to Willamina last week, has two forfeit losses of its own.

The Eagles have struggled recently, getting outscored 84-13 the past two games. Now they take on one of the top teams in the state.

Siuslaw is averaging 41.8 points a game.

The Eagles are averaging 18 points a game after getting shut out in their first three contests. Outside victories against winless opponents Oakridge and Illinois Valley, Rogue River is averaging seven points a game and giving up 46.5.

Sisters is the Cobras’ new opponent after the schedule change.

Central Linn has been shut out in two straight games. Sisters has a 28-26 victory against winless Pleasant Hill.

The Dragons took a step back last week in a loss at Jefferson but can still get in the state playoffs with two wins. They go to Creswell next week.

Oakland can move closer to a playoff spot with a win.

The RedHawks are tied for fourth in a league that only gets three guaranteed spots in the state playoffs. But they currently have a strong power ranking (9) that could help them get an at-large berth, and they have the last two teams in the conference standings left on the schedule.

But Central can’t be looked past after last week’s 54-14 win at Crescent Valley.

SILVERTON — A resilient West Albany High squad showed up again with the opponent in the lead.

Jefferson quarterback Jace Aguilar throws a pass while Monroe's Brody Ballard defends. Aguilar and the Lions host Creswell on Thursday with a chance to move into a tie for first place in the league standings.

West Albany's Ashton Cavender (81) celebrates a stop on fourth down. The Bulldogs' defense has been stingy in the second half this season and will face a big challenge against Silverton on Friday.