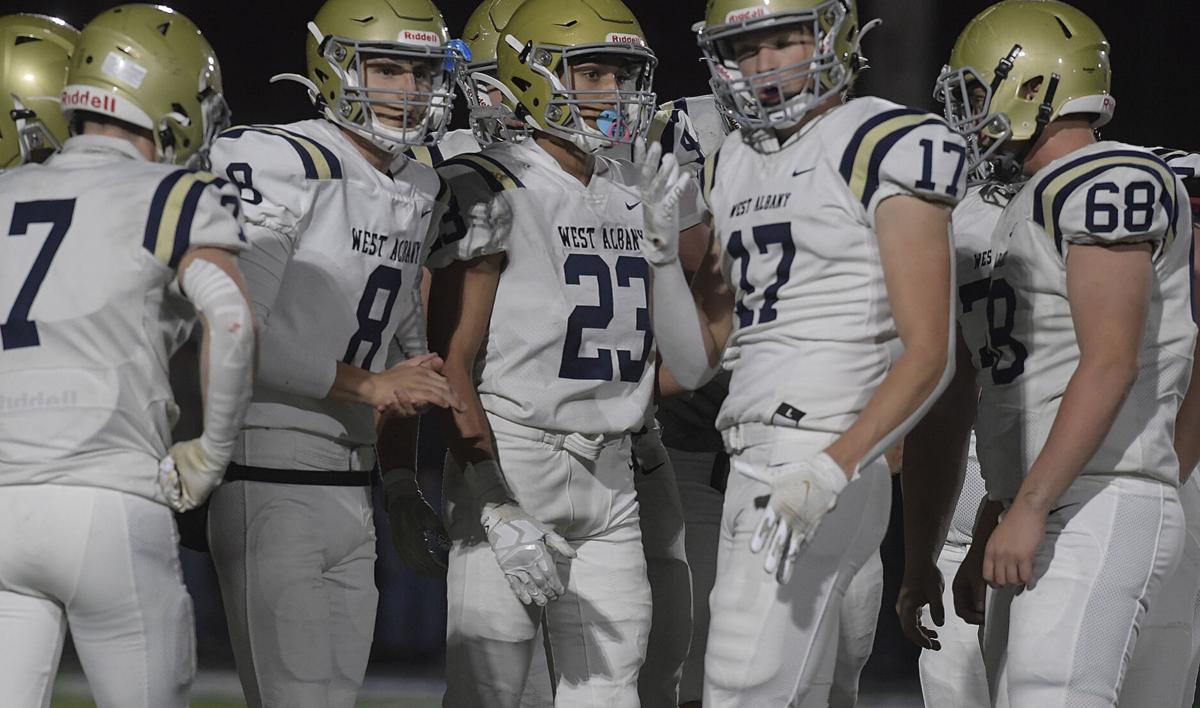 West Albany quarterback Michael Cale (8) and the Bulldogs get a rematch with top-ranked Silverton on Friday in a 5A football state semifinal. 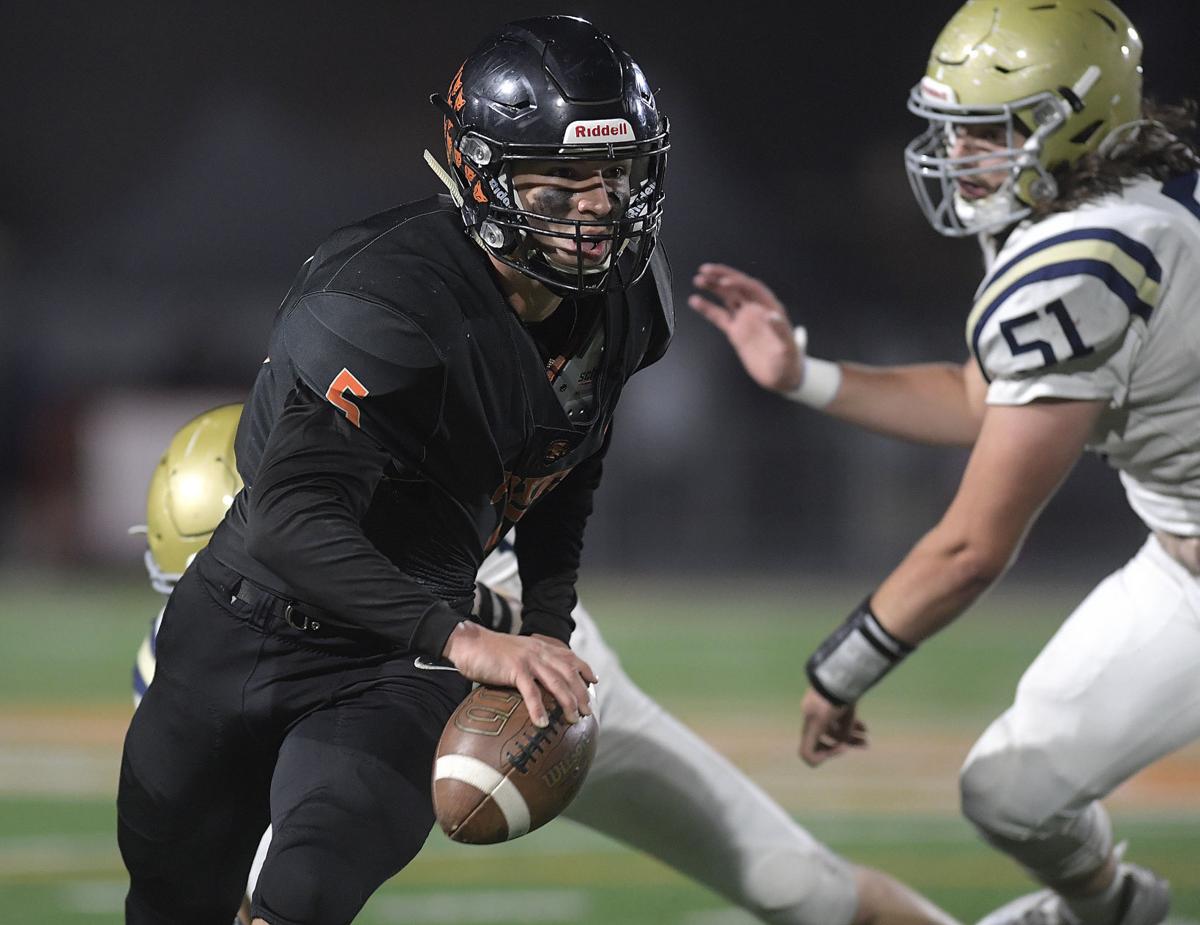 Silverton senior quarterback Jordan McCarty (5), pursued by West Albany's Spencer Hedding in a game earlier this fall, is a big reason the Foxes are undefeated against 5A competition this season.

By now it would be hard not to call this a rivalry.

West Albany and Silverton will meet in an OSAA 5A football semifinal Friday night at McMinnville High School having split the past eight matchups across the last five seasons that their schools have been in the same classification and there was a postseason bracket.

Friday’s game, with coaches and teams that express respect for the other, will be the fourth postseason contest between the two programs in that stretch, dating to Silverton’s 35-6 home win against West in a 2012 state quarterfinal.

“That program makes you better," Bulldogs coach Brian Mehl said of the Foxes. “Every opportunity you have to go against those guys, you know you don’t have to be perfect but you need to play well, and you need to play well in all three phases to come out victorious. That’s going to be no different Friday night.”

The teams have different schemes, but Foxes coach Josh Craig sees similarities in the programs.

“A lot of numbers, a lot of kids that are dedicated,” he said. “Neither team is going to quit, so it’s going to be close in almost every game we play against them.”

From the outside looking in, Craig sees a bend-but-don’t-break attitude in the Bulldogs.

“That’s the thing, especially this year. They’ve had close games. They’ve been down a few times, but never by much,” he said. “They don’t get rattled. That’s the thing about West Albany that I respect. They’re pretty sound and they don’t do a lot of ups and downs.”

From the opposite sideline, Mehl says Silverton’s toughness stands out.

On its way to the Mid-Willamette Conference title, Silverton took a 28-21 home win against West on Oct. 22.

The Bulldogs trailed by three scores in the fourth quarter but made a game of it.

West answered a 63-yard Keegan Walter touchdown run with a 76-yard kickoff return for a score by Jack Moyes. The Bulldogs got a defensive stop and a then a 33-yard touchdown pass from Michael Cale to Tyler Hart-McNally with 1:12 remaining.

With the Foxes trying to run out the clock in the final minute of the game, West’s Gavin Miller recovered a Walter fumble and returned it to the Silverton 38. The Bulldogs reached the Foxes 18 on two pass plays before time ran out.

“Clearly you want to beat each other, but it’s not an animosity where you dislike each other. It’s a respect thing,” Craig said. “They’re tough, they always are. They’re physical, disciplined. West doesn’t make a lot of mistakes. I think we kind of have the same thing going for us, too.”

The rivalry began to take shape in 2012, when Silverton defeated West in the regular season and again in the playoffs. The Bulldogs returned the favor the following year by sweeping both games, including a 17-0 semifinal victory on their way to a state title.

The programs’ last playoff meeting came in 2018, with West winning 20-16 on the road in a quarterfinal. The OSAA did not host playoffs in 2020 due to the pandemic.

Both teams are 10-1 heading into Friday’s game.

The fourth-ranked and third-seeded Bulldogs are feeling good about the progress they’ve made since the loss to the top-ranked and second-seeded Foxes four weeks ago. West defeated Corvallis 41-27 to finish the regular season then got past Scappoose (35-0) and Dallas (28-9) in the playoffs.

“Things are definitely moving in the right direction,” Mehl said. “If we’re playing our best ball, it’s definitely been in the last couple weeks. So that gives you confidence in this next opportunity that we have this Friday.”

Mehl said his team’s offense is playing better because of some schematic changes but also better execution from the group as a whole. The Bulldogs have found a way to more explosive, longer-yard plays. Leading the surge has been the improved play of Cale, a senior quarterback.

West will try to get some production out of its running game after being held to 39 rushing yards on 19 attempts against Silverton the first time around.

The Foxes’ only loss was a 35-28 defeat in the second week of the season at Tualatin (10-1), which is alive in the 6A quarterfinals.

Silverton fell behind 21-0 and there was reason to believe the Foxes were outmatched.

“But the guys did a great job of knowing we could play with them, and we rallied back” before falling short of a game-tying score on an interception near the goal line in the closing seconds, Craig said. “I think they showed a lot of mental fortitude in that game. I think that was good for our confidence.”

Silverton has had the luxury of a third-year starting quarterback in Jordan McCarty, who was voted the Mid-Willamette’s offensive player of the year by the conference’s coaches. McCarty has helped his team stay steady, treating every week of practice the same.

“Having a guy like Jordan that’s been here, is competitive and super coachable, he’s just a great person,” Craig said. “It puts your mind at ease a little bit as a coach.”

EUGENE — The Crescent Valley High boys cross-country season ended Saturday afternoon without a state title, but not without a good effort by t…

EUGENE — Emily Wisniewski ran at the front and no one could catch her when it mattered most.

West Albany High put together what coach Brian Mehl estimated was probably his team's most complete game of the season to date.

MCMINNVILLE — A football season that had a lot of questions at the start ended 10 wins later in the state semifinals.

West Albany quarterback Michael Cale (8) and the Bulldogs get a rematch with top-ranked Silverton on Friday in a 5A football state semifinal.

Silverton senior quarterback Jordan McCarty (5), pursued by West Albany's Spencer Hedding in a game earlier this fall, is a big reason the Foxes are undefeated against 5A competition this season.