Prep boys basketball: Philomath pulls away for home win
Share this
{{featured_button_text}}
1 of 2 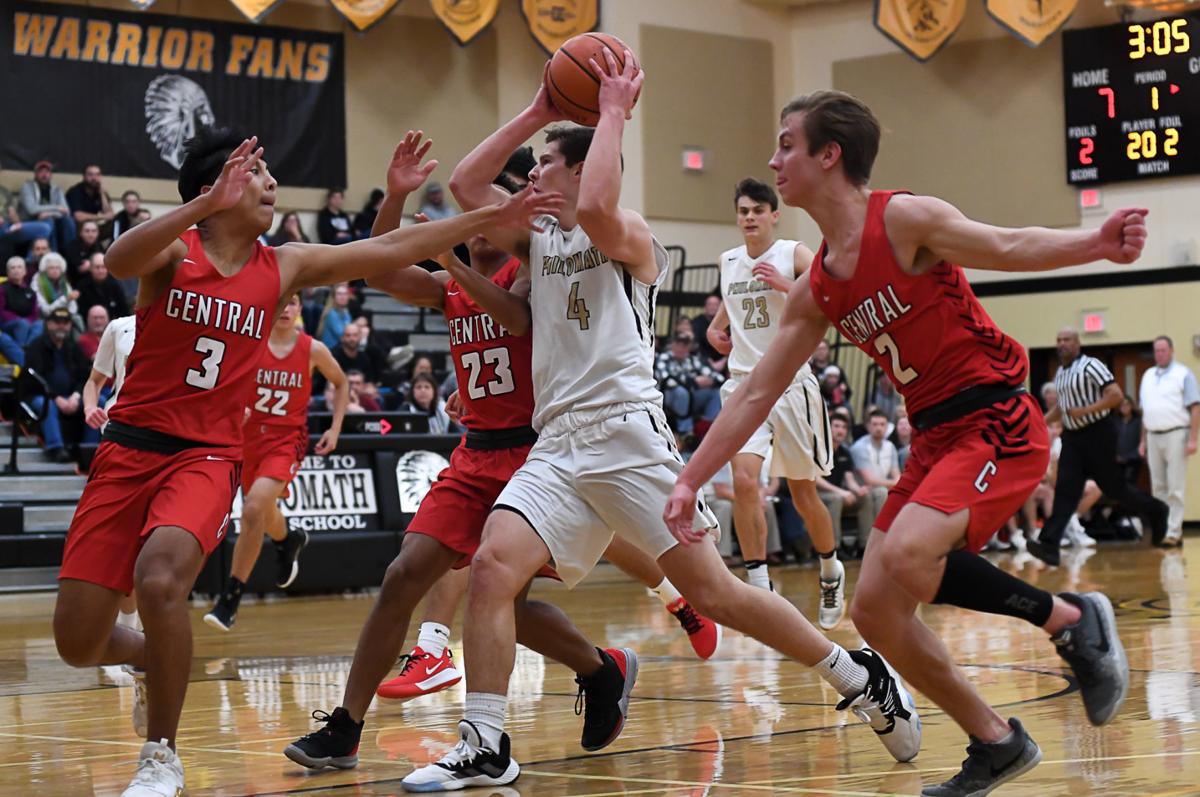 Philomath's Michael Lundy makes a move to the basket in the first half of the Warriors' win over Central on Tuesday. He finished with 16 points. 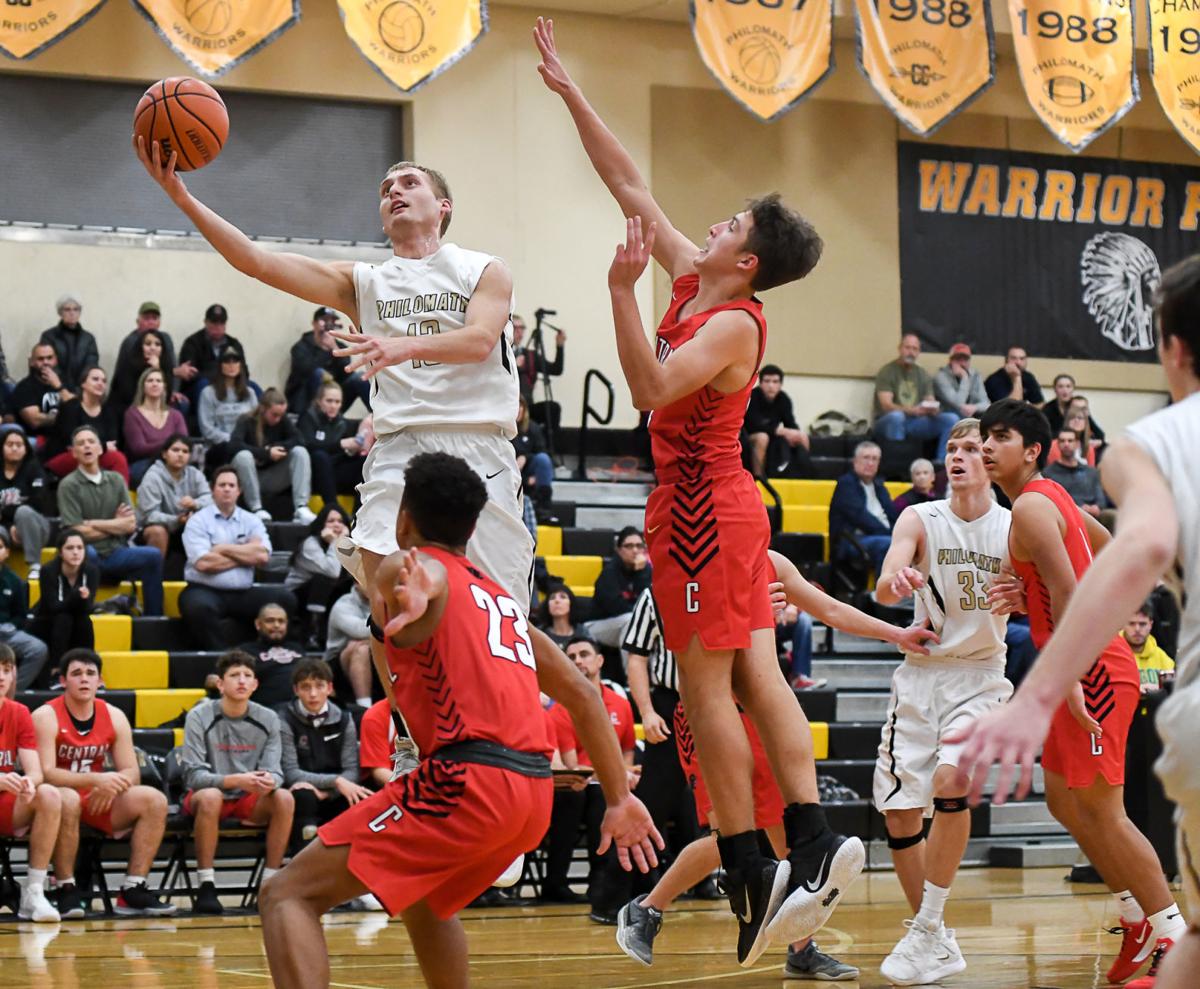 Philomath's Toby Steuve goes up for two of his seven points in the Warriors' win.

PHILOMATH — For a Philomath High boys basketball team that is determined to take a step forward and push for a league title this year, Tuesday may have been a huge stepping stone.

The Warriors (2-0) got a gut check from a gritty Central team and used a fourth-quarter scoring outburst to escape with a 39-26 win at home. After the Panthers used an energetic half-court trap to frustrate Philomath and slow down the pace of play, the Warriors responded with a stellar defensive performance in the second half to seize control of the game.

“We had some resiliency,” Philomath coach Blake Ecker said. “The game was 22-22 there for a long time and we didn’t give up. We kept our heads up.”

Philomath held Central to just seven points in the second half and outscored the Panthers 10-4 in the fourth quarter. Several times in the first half, the Panthers trimmed more than a minute off the clock while running through their offense, forcing the Warriors to spend their energy on defense.

But late in the game, Philomath flipped the script.

“We put a little more pressure on them defensively,” Ecker said. “We went to a 1-3-1 defense and they didn’t like it too much. That was good, it was a good change of pace and we were able to get some transition baskets. We started being more patient on the offensive end and making them play defense.”

Junior guard Michael Lundy led the Warriors with 16 points and shot 6 of 10 from the free-throw line. Toby Stueve added seven points, while Brody Hiner and Ty May each had five for Philomath. The Warriors won despite burying just one 3-pointer — a first-quarter basket from Stueve.

With Philomath holding a 25-22 near the end of the third quarter, Lundy got to the basket and buried a tough layup to send the Warriors into the fourth quarter with a two-possession lead.

“It felt good to finally get a shot to go down,” Lundy said. “Then the guys just sort of started to get pumped up and excited about it. We pick up on each other's energy pretty easily — that’s a key part of our team.”

To begin the fourth quarter, the Warriors came up with two big stops on the defensive end, including a steal that resulted in a breakaway layup from Stueve with 7:15 left in the game.

Next time down the floor, Ben Reams broke down his defender and drove to the basket. When a pair of defenders helped off on him, he delivered a slick wrap-around pass to Dylan Bennett for an easy layup to make it 31-22.

Both teams came up with stops on the ensuing possessions, but Philomath took control of the game for good when May converted a tough layup with 4:50 to go.

“Gotta give our guys some credit, there are some guys who played pretty well tonight,” Ecker said. “Brody Hiner really stepped up — knew his role and knew what to do when he came in. I’m proud of him. Same thing with Ty May, he got some offensive rebounds late in the game that really helped us. He’s a freshman but he’s playing really well right now.”

Philomath will hit the road for a few weeks, playing five games away from home before returning on Dec. 27. The Warriors will be in action next when they play at Elmira at 5:45 p.m. on Friday.

“I think this says a lot about our team and just shows that we can work together,” Lundy said.

Prep wrestling: Oregon sees an influx of girls competing in the sport

Two decades ago, the idea of a girls-only dual wrestling meet seemed impossible to Casey Horn.

Lebanon used a tenacious defensive effort to take a 47-42 win against Silverton in a Mid-Willamette Conference girls basketball game on Friday night.

During Friday’s district prelims, West Albany coach Babette Romancier was overjoyed with what she saw.

For the first time in several weeks, Mid-Willamette frontrunner Silverton has a bit of pressure on it.

Corvallis used an 18-0 first-half run to take a double-digit lead then held off visiting Crescent Valley, 44-36, on Tuesday night in a Mid-Wil…

West Albany knew South Albany’s run would come in the second half, and it did.

The Mid-Willamette Conference district swimming meet will kick off today with preliminary heats beginning at 12:30 p.m. at the Osborn Aquatic …

Philomath's Michael Lundy makes a move to the basket in the first half of the Warriors' win over Central on Tuesday. He finished with 16 points.

Philomath's Toby Steuve goes up for two of his seven points in the Warriors' win.