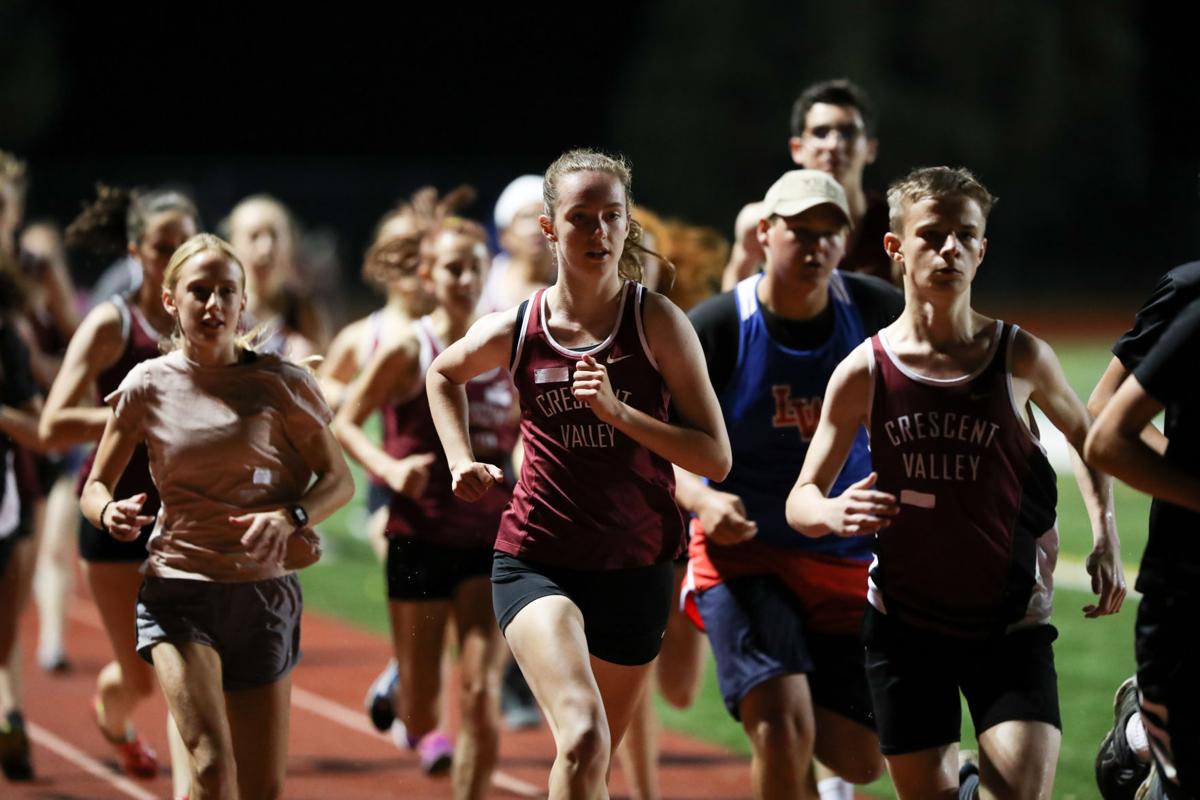 Crescent Valley freshman Emily Wisniewski, left, and senior Ava McKee, center, took part in the Field of Dreams exhibition race on Sept. 18, at halftime of the football game against Corvallis. Wisniewski has quickly established herself as a top contender in the 5A ranks. 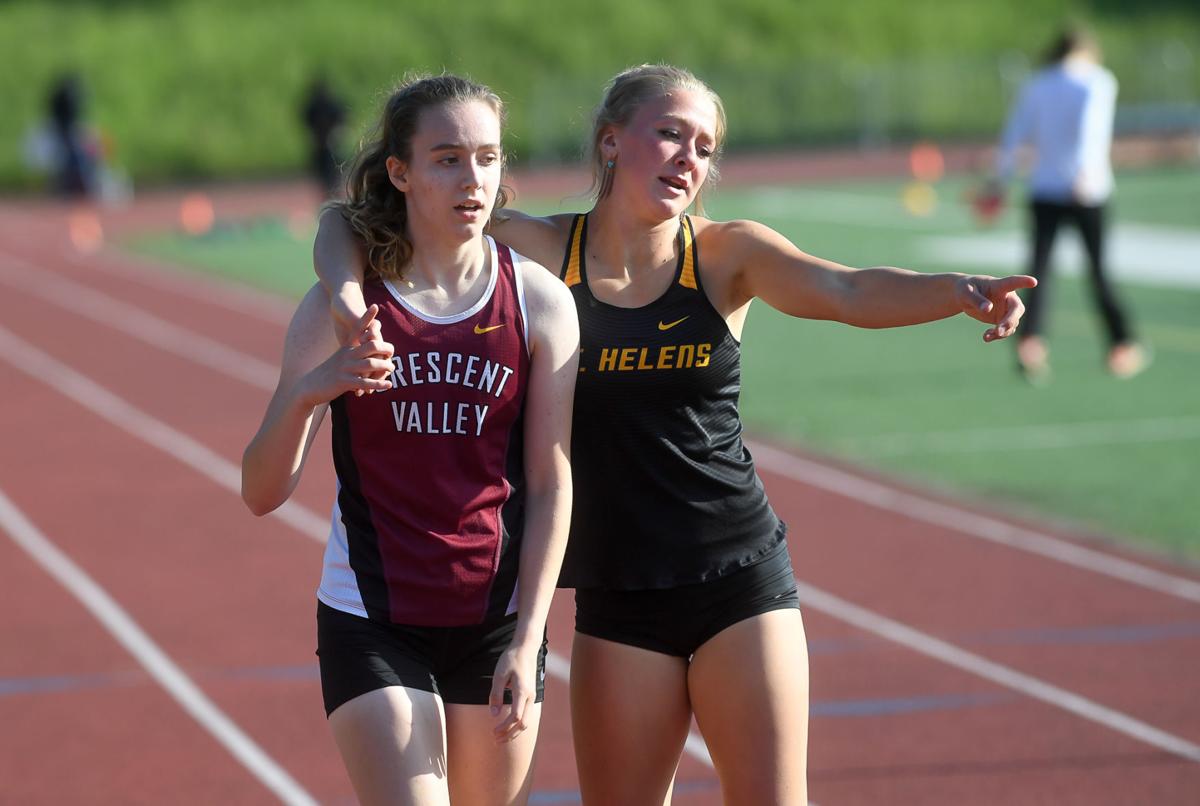 Ava McKee finished second in the girls 400 meter run with a time of 1:00.54 at the 5A Invitational Track Meet in Wilsonville last May 21. McKee trained hard in the offseason to find equal success at the 5K distance in cross-country.

Tyler Bushnell has established some traditions in his 16 seasons as the cross-country coach at Crescent Valley High.

One of those traditions is an early season time trial.

“Every year, for years, we’ve run this time trial to start the season off. We run from our school out there at CV through McDonald Forest up to the Lewisburg Saddle. We’ve timed that for years and used that to check on where people were at early in the season,” Bushnell said.

Crescent Valley freshman Emily Wisniewski was one of the runners who took part in the training run this season.

“Emily blew the doors off it. Crushed it. We’ve had some impressive times over the years but she was far and away the new leader,” Bushnell said.

Wisniewski completed the rigorous, 4.5-mile course in 30 minutes, 43 seconds, more than 6 minutes faster than her closest teammate. The result was no accident.

“I kind of had an idea of it. I knew what the time was and I knew there was a chance of me beating it,” she said.

Even though it was just a training exercise, it was one of the few competitive opportunities Wisniewski has faced in more than two years. Because of the COVID-19 social distancing requirements, the cross-country and track and field seasons were called off during her seventh- and eighth-grade seasons.

“Eighth grade I got to do one track meet. That’s it,” Wisniewski said.

Bushnell said this lack of competition made it difficult to know exactly where Wisniewski was at as she joined the high school program.

“We’ve known of her from the middle school scene, but because of being robbed of her last two seasons there, she has remained under the radar a bit, as good as she’s been,” Wisniewski said.

She is under the radar no longer. After making a strong early impression on her teammates, Wisniewski announced her arrival on the high school scene at the Ash Creek XC Festival on the Western Oregon University campus in Monmouth on Sept. 11.

Wisniewski placed seventh overall with a time of 18:24.10 on the 5K course. Every runner who finished ahead of her competes at the 6A classification and five of them are seniors.

Wisniewski’s time remains the best performance by a 5A runner so far this season. The second-best time has been posted by North Salem senior Isabel Swain, who ran an 18:53.70 at the Saxon Invite.

“She’s quiet, but there’s this fierceness to her that’s impressive. Fierce determination. It’s a unique combo, being quiet, not flashy or real talkative, but then when that gun goes off or our practices start, she’s dialed-in, for sure,” Bushnell said.

“We all really love running with Emily. It’s amazing and we’re all pushing each other to do better,” McKee said. “She’s a really sweet kid so I’m just glad to have her around. It’s nice making new friends and she’s fitting in well, I think.”

McKee has also established herself as a contender in her final season running cross-country. She finished the Ash Creek race in 20:05.5. That places her just outside the 5A top 10 this season and is her best time since she ran a 19:55.8 at the 2019 OSAA state championships.

McKee has found more success in track and field in which she specializes in the 400 and 800 meter races. But this year, she has deepened her commitment to the cross-country season.

“In years past, I’ve typically been a very low-mileage runner, typically averaging under 20 miles a week. This season, I’ve been running pretty much every day and I’m up over 40 miles a week, so I’ve really started training for it and I feel like I’m in a shape representative of my athletic abilities,” McKee said.

Bushnell is excited to see McKee’s hard work begin to pay off in cross-country.

“She’s coming off a great track season,” Bushnell said. “She’s used to the shorter, quicker stuff. She’s run cross-country every year. This year, she’s really made some breakthroughs in handling the 5K distance, being all-in on the 5K distance.”

For Wisniewski, running is part of her family’s life. Her brother, Eli, is her offseason training partner and her dad, Mike, serves as her coach.

“The first run I went on was with my mom (Loren) in third grade,” Wisniewski said, adding that she didn’t start running on a regular basis until fifth grade. “I just loved it.”

She took a week off at the start of the summer and then began training, adding more miles to her weekly routine as she went. She is still in the high mileage part of her training, but is beginning to focus more on speed workouts as the season continues.

McKee said the variety in training is exciting because the speed workouts offer an opportunity for her to set the bar for her teammates, including Wisniewski.

“On those days, I push it as far as I can and I know that helps Emily out, too, because we’ve talked about it,” McKee said.

The hope is to peak for the district and state meets.

Cross-country differs from some other team sports in that every individual plays an equal role in the team’s success or failure. Unlike a sport such as basketball, where the arrival of a star freshman can lead to less playing time or fewer shot attempts for some teammates, every member of the cross-country squad has the same opportunity to compete on the same course.

Crescent Valley High edged South Eugene for the boys team victory on Saturday at the annual Harrier Classic at Bryant Park in Albany.

Crescent Valley freshman Emily Wisniewski, left, and senior Ava McKee, center, took part in the Field of Dreams exhibition race on Sept. 18, at halftime of the football game against Corvallis. Wisniewski has quickly established herself as a top contender in the 5A ranks.

Ava McKee finished second in the girls 400 meter run with a time of 1:00.54 at the 5A Invitational Track Meet in Wilsonville last May 21. McKee trained hard in the offseason to find equal success at the 5K distance in cross-country.