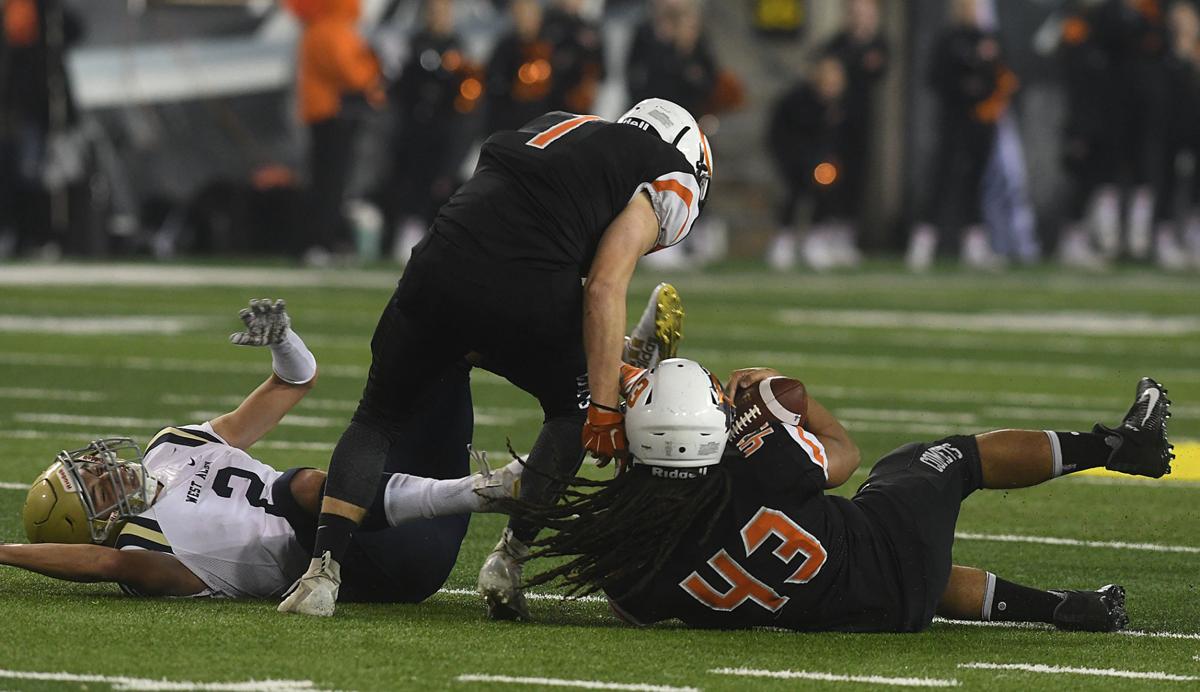 Crater's Tyler Ennis intercepts a ball and falls on his back in front of West Albany's Caeden Zamora to solidify the Comets' victory over the Bulldogs. 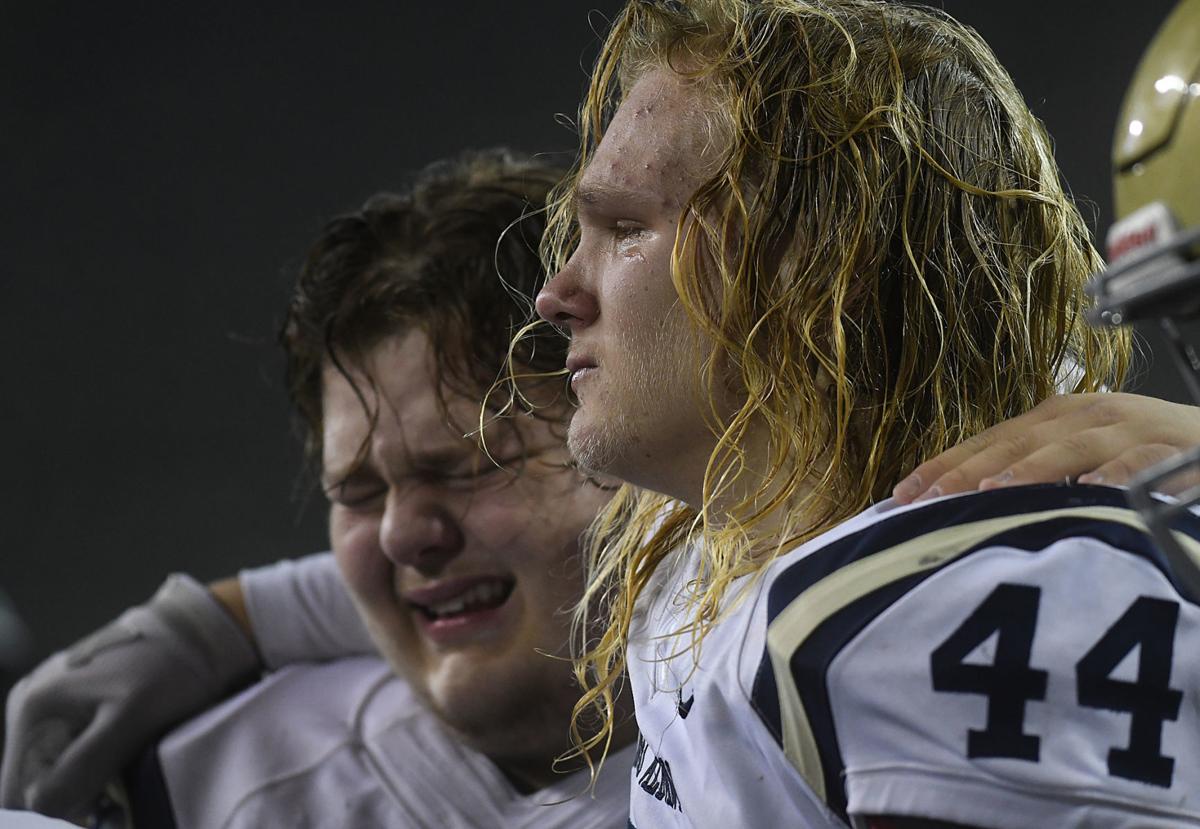 West Albany's James Burwell and TJ Zimmermann hug after losing to Crater in the 5A semifinal game.

EUGENE — West Albany High was in excellent position to accomplish what it wanted Saturday evening.

Down six points with the ball, the Bulldogs were driving for the potential winning touchdown when the game went sideways on them.

A Carson Van Dyke pass was tipped at the line of scrimmage and intercepted by Crater’s Tyler Ennis with 74 seconds remaining. The Comets took two knees to seal their win and end West’s season a week earlier than desired

Crater walked away with a 30-24 win in an OSAA 5A football semifinal at Autzen Stadium.

Van Dyke had Connor Wolfe, his top target all year, in his sights for what would have been a big play.

“We threw a slant. I was going to squeeze it between the safety and the corner,” said Van Dyke, a senior and two-year starter. “It was going to be a first down and we were going to go down and run the ball about two or three more times. Then put it in the end zone and go celebrate and have pizza after the game.”

Instead, West Albany (11-1) saw its season finish in the semifinals for the second straight year.

After second-seeded Crater (11-1) had taken the lead on Brady Brock’s 69-yard touchdown run but missed the point-after kick, the third-seeded Bulldogs’ drive was setting up well.

Porter Phillips ran for 13 and then 12 more to move the ball to the West 45. Porter was stopped for 1 yard, Blake Bowers got 3 more and Phillips 4 to set up a 4th-and-2 play.

Phillips ran for 5 yards off the left side, and the Bulldogs were in business with a first down at the Crater 42 with 1:40 left.

But it wasn’t to be.

“I trust these guys. We were confident in that drive,” Phillips said. “We were just driving down then field. Our coaches were calling good plays. It just came up short today.”

Crater will play league rival and top seed Thurston, a 44-14 winner against Silverton in Saturday’s first semifinal at Autzen, in next Saturday’s championship game.

West started quickly after recovering a fumble on Crater’s second possession. The Bulldogs turned that into a Wolfe 3-yard touchdown run, which was set up by a 33-yard pass from Van Dyke to Caeden Zamora, who wrestled the ball away from a defensive back to get the ball to the Comets 7.

Crater answered back with a Trever Davis 38-yard field goal.

The Bulldogs then went three-and-out and Gavin Acrey, the Comets’ stud running back, scored on a 77-yard run on the next play from scrimmage. Acrey finished with 179 yards on 22 carries.

West got on the scoreboard again with the help of Crater’s failed fake punt attempt from its own 43.

The Bulldogs turned that into a 3-yard touchdown run by Zamora on a sweep. The score was set up by a 36-yard Phillips run.

The Comets answered right back with a quick eight-play drive that Trevor Jaasko completed with a 10-yard touchdown catch from Davis.

Late in the first half, West recovered a Davis lateral pass and got a Seth Jackson 28-yard field goal out of it on the final play before halftime to lead 17-16.

“I think as a whole our defense played well,” Bulldogs coach Brian Mehl said. “I think there were moments that tackling was a little sloppy, which led to first downs when I thought we could have got the ball back. They got two big-play touchdowns, and those are hard to get against us. But credit them because they got it.”

West extended its lead on the first possession after halftime.

The drive was highlighted by Phillips’ 18-yard run and Wolfe’s 8-yard reception to convert a 4th-and-2 before Zamora got behind the defense for a 26-yard touchdown grab to make it an eight-point game.

Crater went right back down the field on its next drive, getting a 40-yard pass then scoring on an Acrey 3-yard touchdown down. A two-point pass play was converted to tie the game.

West’s Bowers intercepted a pass to end the Comets’ next drive. The Bulldogs then moved the ball deep into Crater territory, but Bowers was stopped 4 yards short of a first down on a fourth-down reception.

Five player later, Brock ran 69 yards around the right side for the touchdown for the game’s final score.

Phillips rushed for 121 yards on 19 carries and teammate Zack Cehrs 30 yards on eight attempts. Van Dyke was 10 of 18 passing for 131 yards with one touchdown and one interceptions. Zamora was the Bulldogs’ leading receiver with five catches for 84 yards.

Mehl called his team’s final possession “the perfect opportunity at the end of the game.”

“I don’t think there was any doubt in my mind we were going to do it. We were going to go down and score and kick the extra point and win,” Mehl said. “The guy made a good play, he tipped the ball at the line of scrimmage and it bounced in the middle of the field and their guy caught it.”

West Albany senior Porter Phillips has been named to the 5A football all-state first team at two different positions.

Crater's Tyler Ennis intercepts a ball and falls on his back in front of West Albany's Caeden Zamora to solidify the Comets' victory over the Bulldogs.

West Albany's James Burwell and TJ Zimmermann hug after losing to Crater in the 5A semifinal game.