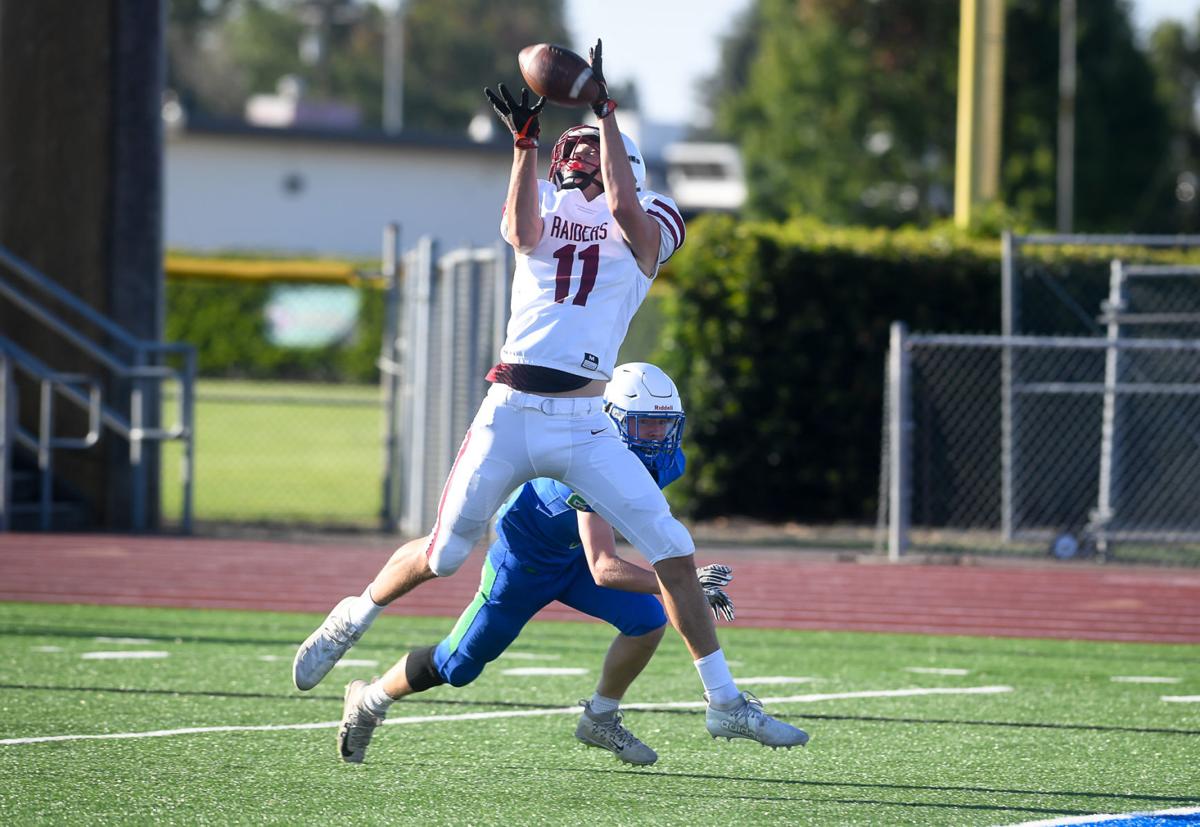 Crescent Valley's Jake Leibelt scores a touchdown against McKay on Friday at a jamboree in Lebanon. Leibelt is one of several capable targets for quarterback Rocco McClave. 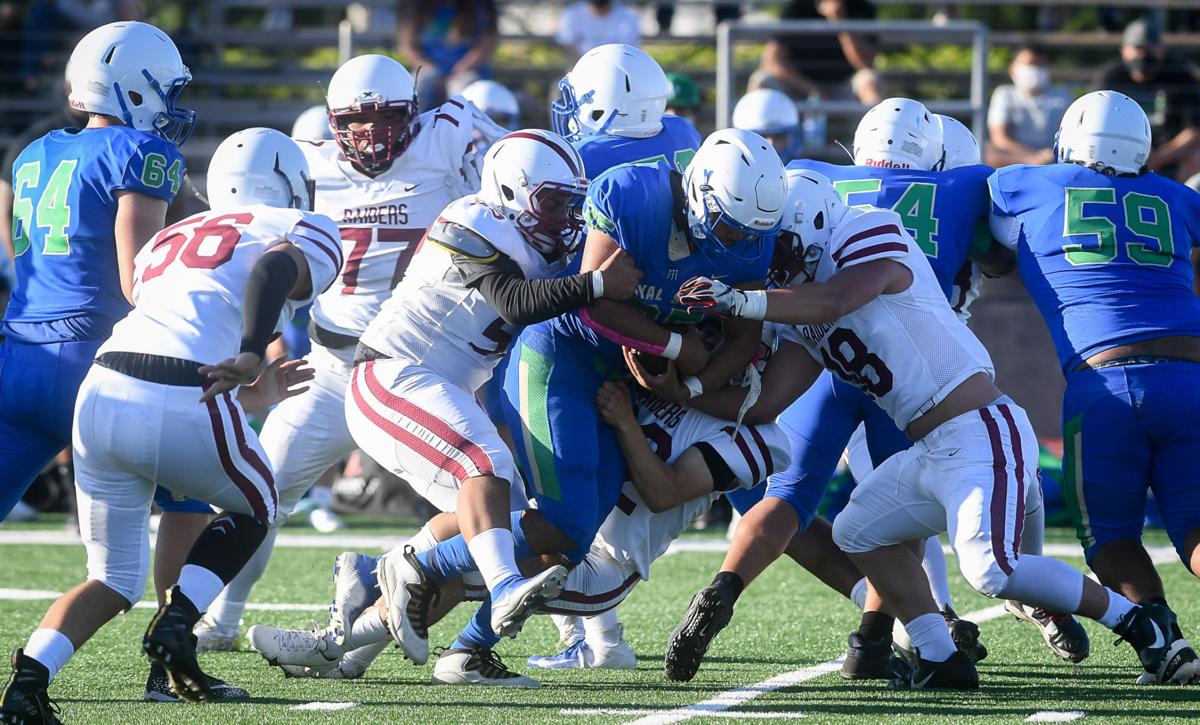 The Crescent Valley defense makes a stop against McKay. Raiders first-year head coach Andrew McClave said his team will be "very aggressive" on defense this season. 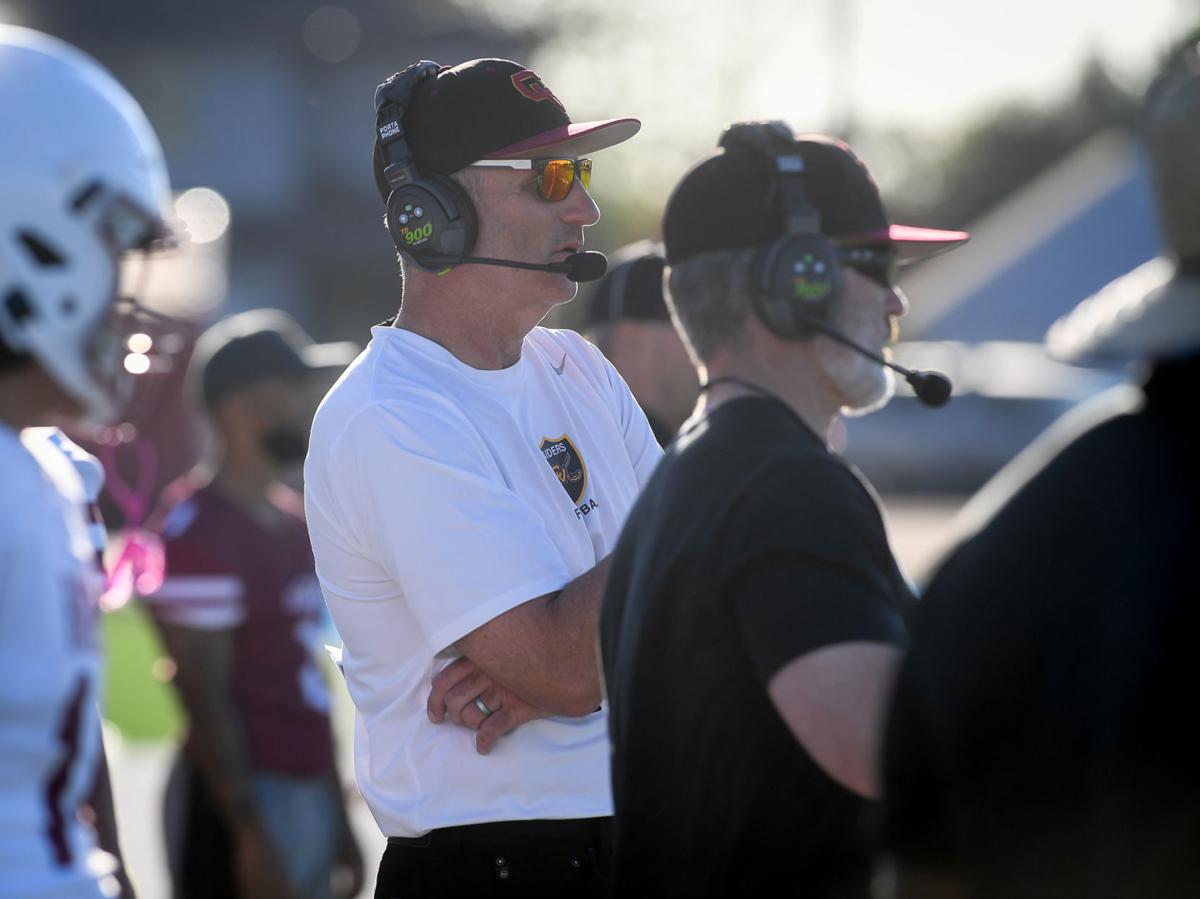 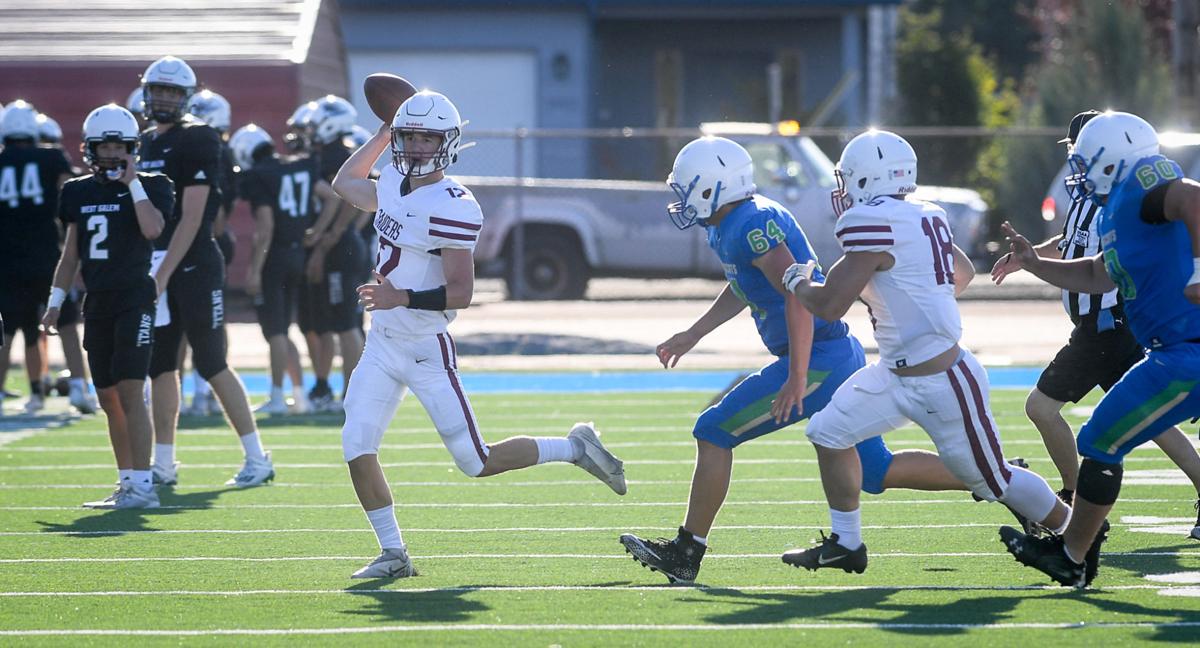 Crescent Valley quarterback Rocco McClave is flushed out of the pocket in Friday's jamboree. McClave leads an offense with many options.

Crescent Valley might be small in numbers but not in talent as the Raiders begin the high school football season under first-year head coach Andrew McClave.

The program has enough players to field two teams, which wasn’t the case during a truncated spring season, and McClave says that is a plus.

“We don’t have a ton of depth, that’s a weakness,” the coach said. “But what we have, our first string is really good on both sides of the ball.”

McClave, a former NFL and college coach who played linebacker at UCLA, might be new to the program but not to his players. He coached many of them in basketball or football in youth programs.

As far as team goals for the season, he wants his players to learn and grow, with the desired result of that being on-field success. McClave wants the program “to be something kids want to be a part of.” He’s seen several players return to the program after time away.

Another goal is “to play consistently and play hard every week and give yourself a chance to win every game. There’s no reason that’s not attainable or else we’re simply wasting our time,” McClave said.

Players say they want to have a bounce-back season after going 1-3 in the spring while scoring a combined 26 points.

Among the team’s top players is a quartet of seniors: Landon Parker and Ty Abernathy, both receivers and defensive backs, tight end/linebacker Jonah Raab and lineman Nate Gibbs.

One player returning to the program is tight end/defensive end Jake Leibelt, another senior.

Leibelt joins Parker, Abernathy and Raab as potential targets for sophomore quarterback Rocco McClave, the coach’s son who began last spring at receiver but was behind center by the end of the season.

“We all do it because of our line, because we can block,” Leibelt said of the pass-catching. “Our passing game is really strong. If we just get our line to run block, our run game will be strong too. But our offense is probably the strongest.”

Among those blockers is Gibbs, who takes up some space with his 6-foot-6 frame. He appreciates that McClave has included more contact in practice than former coach Mike Connor did, which Gibbs believes helps his team better prepare for games.

Gibbs says his team needs more bonding but that it has grown closer in the time the players have been together.

“Know who you’re playing for, and know that the person is going to play for you as well,” he said.

McClave, whose team will be “very aggressive” on defense, said the strength of his team is having a lot of good athletes. He also credits his son for being a “talented quarterback.”

“Hopefully we can get the ball to the right players and call good plays offensively,” the coach said.

The Raiders participated in a jamboree at Lebanon and will officially open their season Friday against Lincoln at Ida B. Wells High School (formerly Wilson HS) in Portland.

CV goes to Ridgeview in Redmond the following week before starting Mid-Willamette Conference (5A Special District 3) play at home against rival Corvallis on Sept. 17.

Prep football: Monroe is the league favorite, but Jefferson and Central Linn hope to climb

Two years ago, Santiam Christian went 13-0 and won the state 3A championship with a 41-34 victory over Hidden Valley.

High school football: It's a year of change for Sweet Home

SWEET HOME — When Daniel Luttrell was in fifth grade his mother asked him which sport he wanted to play: soccer or football.

Rankings are from the OSAA coaches polls

The semifinalists for the 2022 National Merit Scholarship Program were announced on Wednesday.

Crescent Valley's Jake Leibelt scores a touchdown against McKay on Friday at a jamboree in Lebanon. Leibelt is one of several capable targets for quarterback Rocco McClave.

The Crescent Valley defense makes a stop against McKay. Raiders first-year head coach Andrew McClave said his team will be "very aggressive" on defense this season.

Crescent Valley quarterback Rocco McClave is flushed out of the pocket in Friday's jamboree. McClave leads an offense with many options.